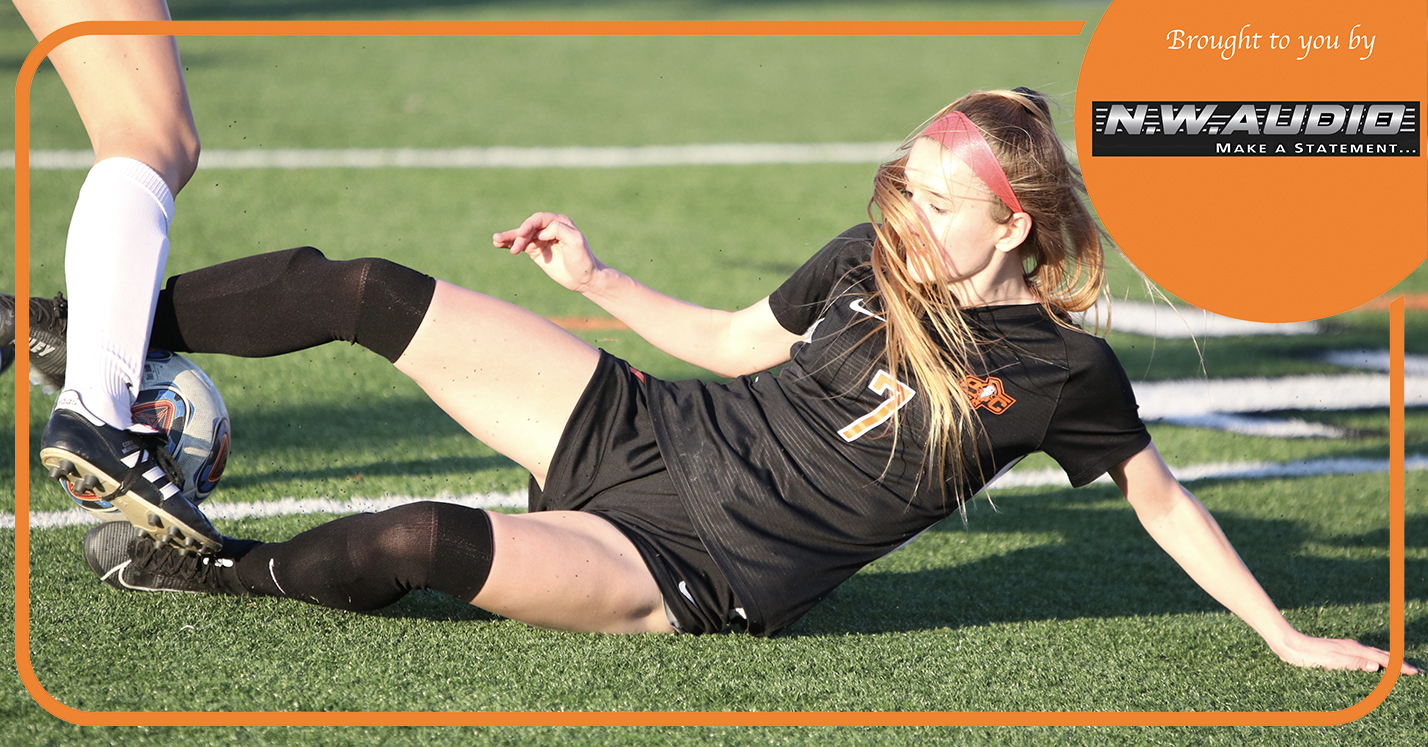 Hannah Stone looked up and fired a low cross into the box.

Watching the play unfold, Platte County’s speedy junior forward received just the type of finish she wanted on the end of her pass. However, she hoped to find junior midfielder Riley Smith but instead ended up surprised by the result.

A Kearney defender deftly turned the ball into her own net, giving Platte County an early lead that doubled by halftime and led to a 2-0 victory Thursday at Pirate Stadium.

“It was a surprise to me,” Stone said. “It was supposed to go to Riley. I don’t even know. I wasn’t expecting it.”

Stone didn’t receive an assist on the own goal in the 23rd minute but deserved one. Smith didn’t score the opener but tallied one in the 28th minute to give Platte County a 2-0 lead. She took possession in the middle of the field, dribbled past two defenders and calmly fired a right-footed shot from 16 yards out into the bottom left corner of the goal.

The opening goal seemed to flip a switch for Platte County (5-1), which immediately started applying consistent pressure that led to the second goal.

“We stopped playing that kick ball, which we came out doing early on,” Platte County coach Ashlyn Brantley said. “Once we started knocking it around, I think that early goal gave us some confidence to continue to play like we know how to play. That’s what we’ve got to come out and do each time.”

Playing her first season for Platte County, Smith now has five goals in the four games decided by three goals or less. The strong start to the season, which includes a 2-0 mark now in Suburban Conference Blue Division play, has been in large part due to the speedy, aggressive midfielder’s playmaking ability.

“She’s a great asset, and I feel me and her work together,” Stone said. “We’re equal but different.”

Platte County senior goalkeeper Grace Niece made a pair of comfortable saves late in the first half, but Kearney never created a strong chance on goal. The Pirates finished off a fourth straight shutout with senior goalkeeper Avery Krahenbill playing the second half without needing to record a save.

The run of shutouts includes two against Kearney, which hadn’t lost to Platte County since 2011 prior to this season.

Platte County opened the season with veteran senior central defenders Emma Murray and Ryanne Rhude anchoring the backline while sophomore Morgan Stewart (left back) and freshman Alex Beeman (right back) flank them. The Pirates allowed a late goal in a 3-1 win over St. Pius X to open the season in the Platte County Invitational before allowing a goal on either side of halftime in a loss to Staley.

The victory over Kearney gave Platte County third place in their home tournament with the Bulldogs holding out some of their starters. The Pirates followed that with a 3-0 shutout of St. Joseph Central last Monday and an 8-0 shutout of Winnetonka the next night. The newly formed defense has been finishing out the strong efforts, a positive sign so early this season after losing all of 2020 due to the pandemic.

“Those two in the middle, Ryanne and Emma, are keeping (Stewart and Beeman) connected and talking them through a lot of stuff,” Brantley said. “I think the part that’s helping is they are actually listening and following those directions, whether it be from their teammates or us. They want to play, and they want to get out there. And they’re not afraid just because they’re younger and underclassmen.”

Platte County’s offense continues to find its footing with the junior duo of Aleah Dixon and Stone starting up front as strikers with support from Smith in the attacking midfield role.

In the rematch with Kearney, Stone created havoc by chasing down passes along the sideline. She did so in the eight minute on the right flank but fired a shot well wide under heavy pressure. She She made a similar play shortly out of halftime but saw her right-footed shot from a tight angle hit directly at the goalkeeper.

“I feel like we’re doing a lot better with possession,” Stone said, “But we need those runs to get to the goal.”

However, Kearney’s best chances of the second half came on two medium-range free kicks, and neither resulted in a shot on target.

Smith nearly created a chance for a third Platte County goal in the 61st minute, navigating the end line with some fancy footwork before appearing to go down in the 18-yard box after contact from a Bulldogs defender. The referee dismissed pleas for a penalty kick, and the Pirates settled for the 2-0 margin of victory.

“We had to be conservative, had to play smart,” Brantley said. “I think we were still creating those opportunities, being busy bees up there and getting in those passing lanes. That was the main thing. We wanted to cut off those passing lanes, and it started with our forwards and continued through the rest of the line.

“Yeah, we would’ve like to finish more, but not too bad.”

The Pirates went on the road Monday to St. Joseph and came away with a win thanks to a pair of goals from Smith.

Smith opened the scoring for Platte County in the 24th minute on a penalty kick and doubled the lead late in the second half on a solo effort in the 70th minute. The Pirates then tacked on a late goal with Stone’s cross finding freshman forward Carmen Gentilia for a tap-in on the back post.

Platte County posted 17 total shots but struggled to find the back of the net in the run of play until late.