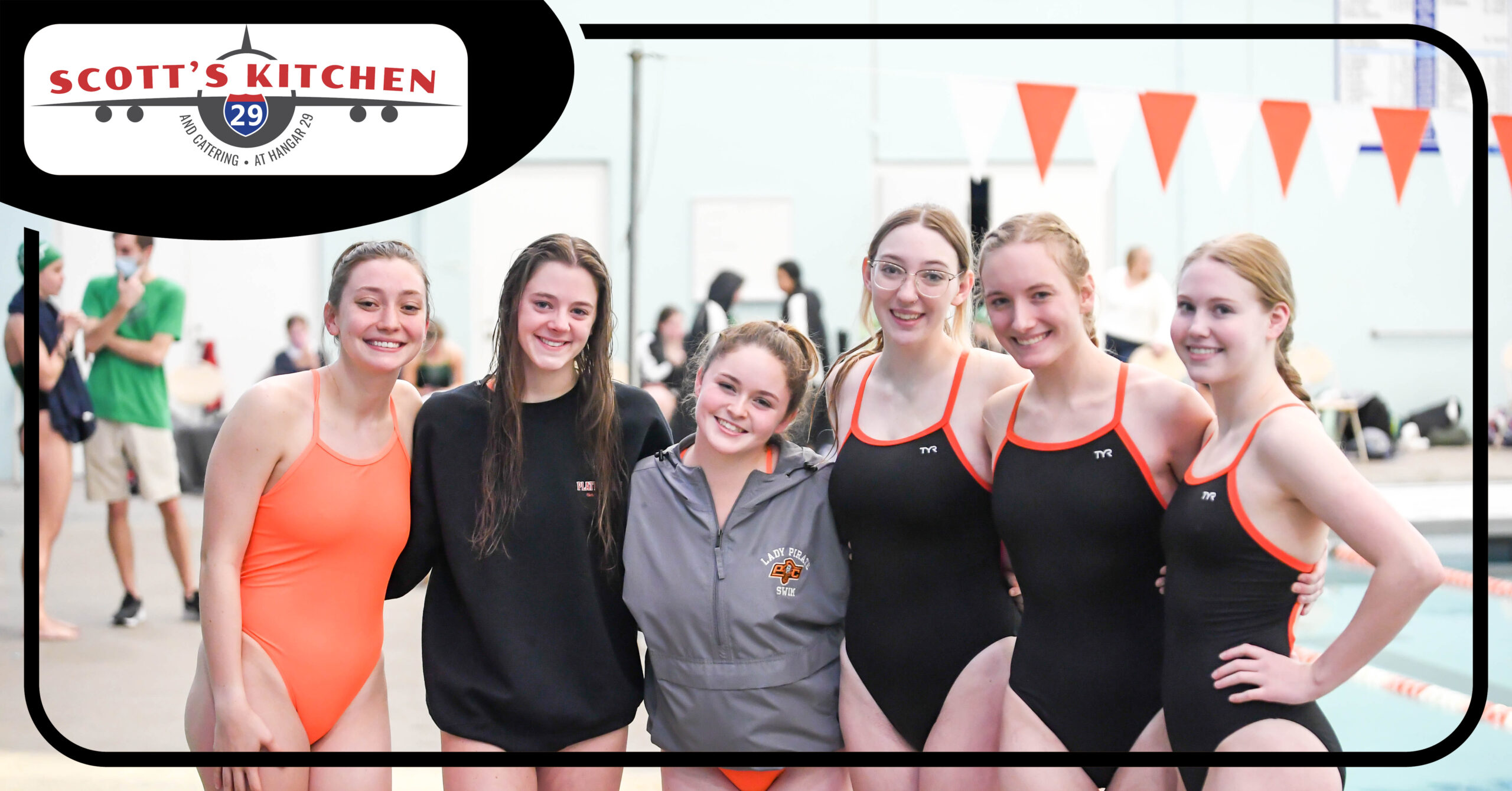 No, the triangular for Platte County, Smithville and St. Pius X was definitively about recognizing six seniors in their final home meet at Platte County Community Center North. The Pirates took the opportunity in another dominant showing to honor the contributions of Meredith Ballou, Erian Stone, Maria Molinari, Jaycee Henry, Cassidy Reinsch and Olivia Aagesen on Thursday evening — complete with allowing the group to complete the rite of passage with a final cannonball into the pool.

Platte County totaled 711 points and finished well ahead of St. Pius X (328) and Smithville (268), but the Pirates had some fun doing it.

Ballou, a member of all three school-record-setting relays from the past two seasons, teamed with Stone, Molinari and Henry in the meet’s opening event. They finished third in the 200-yard medley relay with Platte County’s team of junior Drew DeLay, sophomore Brooklynn Hays and freshmen Madeleine Stone and Ireland Shank winning in 2 minutes, 0.82 seconds. The Pirates have high expectations in the few weeks left this season, but the future remains bright, as well.

Ballou has been a mainstay for Platte County, while Erian Stone has been a valuable contributor this season. Molinari is a team leader and solid depth piece, while Henry, Reinsch and Aagesen received the opportunity to play a part in the victory in their final home meet.

Platte County won eight events total, including Ballou in the 100 butterfly (1:05.25). However, DeLay (50 and 500 freestyle) and Hays (200 IM) were the only Pirates to put up improved Class 1 Missouri State Swimming and Diving Championships consideration marks on a night when most swimmers were on off events and the relay lineups were shuffled.

DeLay took on the rare short- and long-distance double, winning the 50 in 26.28 and shaving more than a quarter of a second off her previous best time. She also won the 500 with a new state mark 5:50.93, a time second only to Ballou for top team best this season.

Hays was the only swimmer in the IM and still managed to improve her time in the event to 2:23.88. She also won the 100 freestyle in 58.51. Madeleine Stone was the only other individual winner for Platte County was Madeleine Stone in the 100 breaststroke (1:20.45). The Pirates were also victorious in the 200 freestyle relay with juniors Lauren Beatty and Madeline Judy plus Shank and Hays (1:52.78), while the senior quartet of Reinsch, Henry, Aagesen and Molinari came in third behind St. Pius X.

In the 400 freestyle, Platte County’s senior group of Erian Stone, Aagesen, Reinsch and Ballou placed second to Smithville but ahead of the Pirates’ other team in the event.

Platte County’s focus now shifts to next week’s Suburban Conference Blue Division Championships where the Pirates seek a fourth straight title. They have three relays that rank in the top 7 for Class 1 consideration times, although only two of the three can be at full strength.

That means Ballou, DeLay, Judy, Hays, Erian Stone, Madeleine Stone and Shank will be counted upon for solid showings that not only put Platte County in position to fend off Kearney for the crown but also to potentially lower some of the state cuts. The Pirates currently have six individual events that rank in the top 20 in Class 1.

Those times represented three of Platte County’s nine event victories. The total would’ve been 11 if not for a disqualification of the Pirates’ top 200 medley relay of Madeleine Stone, DeLay, Ballou and Hays in the opener.

DeLay (50 freestyle, 26.75) and Reinsch (200 IM, 3:12.69) were the other individual winners for Platte County, and Shank might have won the medley race if not for a disqualification. Despite not having the optimal lineup, the Pirates also topped the 200 freestyle relay with Judy, Beatty and sophomores Alyson Stone and Jayden Benninghoff. They were also victorious in the 400 freestyle relay, but Ballou, DeLay, Hays and Madeleine Stone were well off the recent school record mark set the prior weekend, posting a time of 4:06.56.