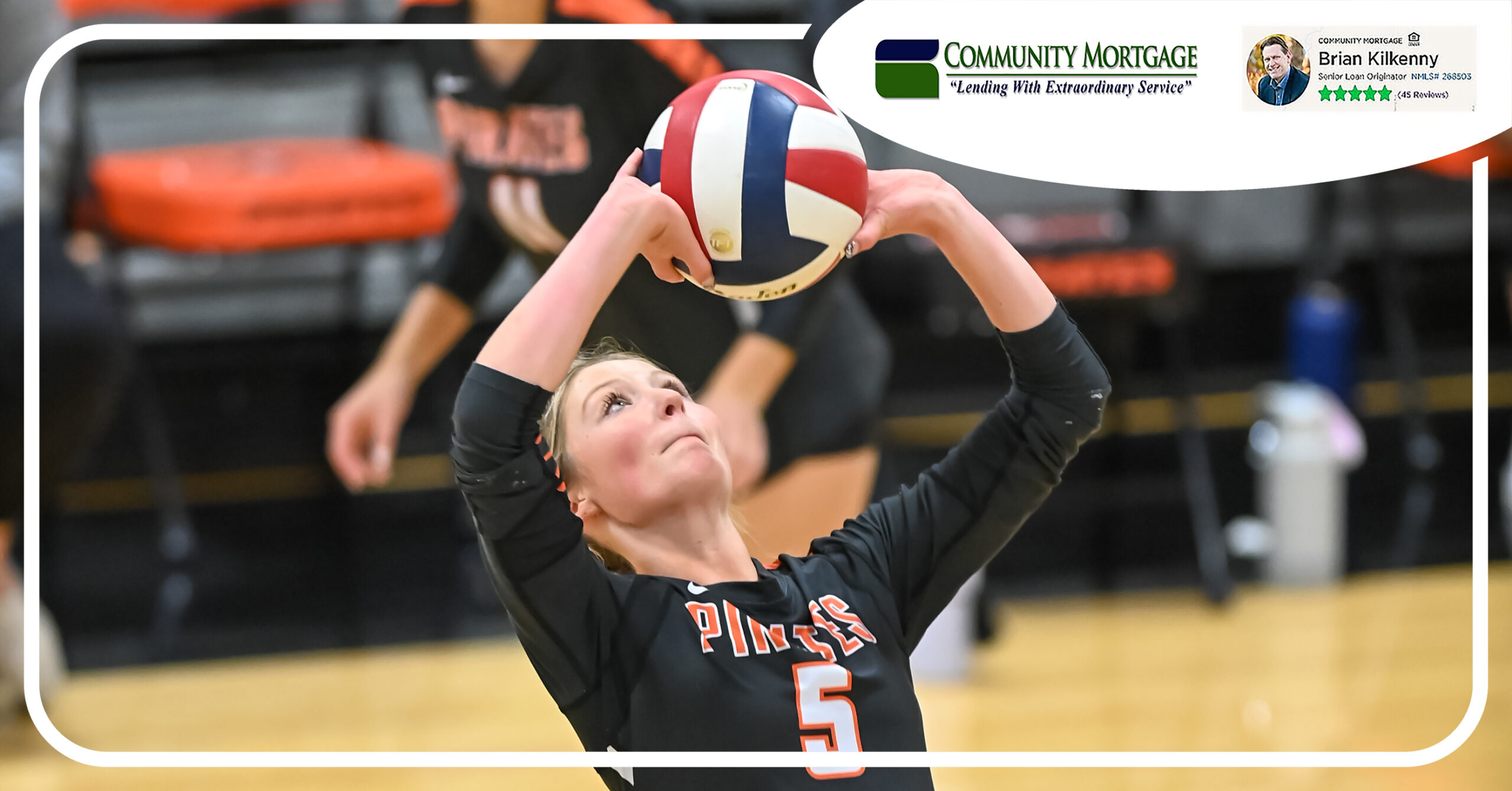 Smithville stormed back to take the third set at Platte County High School, forcing at least a fourth. The Pirates swept each of the previous conference matches this week and hadn’t lost a set to the Warriors since 2015.

Platte County never trailed in the fourth set to close out a 25-15, 25-19, 17-25, 25-17 victory over Smithville. Pirates senior setter Emerson Walter led the way, dishing out a season-high 42 assists and match-highs of three service aces and 18 digs, while seniors Kate Brown and Mary Grace Hunter, junior Karsyn Stehlik, and sophomore Kendall Johnson all finished in double-figures for kills.

“We lost our energy (in the third set), and you could tell we were just like tired and there was no want to be there anymore and want to win,” said Walter, who set the single-season record for assists in the win over Smithville and pushed her total to 735 and counting by the end of the week to move further clear of Ashley Bell’s previous mark of 709 set in 2017. “In between sets, it was like a switch flipped. We just kind of took off and were like a whole other team.

“We were honestly very angry, but we kind of took that out on the ball in the fourth set.”

Platte County (22-8) improved to 10-0 in conference play in a one-day-delayed sweep of Raytown South on Friday night, continuing the Pirates’ coronation for a third straight Blue Division crown. They haven’t lost a league match since midway through the 2018 season, now a stretch of 38 straight wins over blue Division competition.

After overcoming an early deficit in the second set against Smithville, Platte County appeared poised to complete an 11th sweep in 11 tries this season in conference play.

Instead, Smithville jumped to an early lead before the Warriors committed a return error and sophomore Ava Wheeler’s second of two service aces forged a tie at 7-7. Brown added one of her team-high 11 kills in the ensuring back and forth, and a block from Stehlik and sophomore Tatianna Murray gave the Pirates their first lead of the third set at 12-11.

Smithville responded with a 6-0 run and wouldn’t trail again, while Platte County coach Katlyn Donovan attempted to avoid using a timeout. Eventually, she took two but couldn’t quell the momentum of the Warriors, who featured an animated bench during spells of strong play.

“I didn’t think we were close. It’s just sometimes you have to let them work through it,” Donovan said. “But it got to the point where I thought we needed a little conversation. Obviously, the timeouts didn’t work because I think they went on a couple of runs, but I like to let them work things out on their own. I didn’t want to call a timeout, but I did.”

In the fourth set, Wheeler provided an impressive dig to help Platte County gain the initial point, and Brown followed with a kill for a 2-0 lead.

Smithville would answer with two unanswered before the Pirates went on a 4-0 run that featured a Stehlik kill and Brown ace, forcing the Warriors into a timeout. The Pirates would push the lead to 12-4 and 20-12, zapping the energy of the underdog.

Platte County played especially strong at the net with 10 total blocks, four for Murray and three for Stehlik.

“I went down in the locker room and told them the difference between the third set and the fourth set was our hitting percentage,” Donovan said. “In that third set, we hit negative, committed too many errors. I think we gave them 17 of their 25 points, so we just had too many errors.

“Fourth set, I loved how we responded from the third set in not committing those errors, playing smart volleyball.”

Brown supplied the first two kills, while Stehlik had another before Walter hit her first ace in a quick 4-0 spurt. Brown then supplied the service in a 5-0 run that made it a 9-2 advantage that then ballooned to 11-3.

“So much,” Walter said of how much it means to the Pirates when Brown starts strong. “It just helps carry us because she’s not only an option in the front row but in the back row, as well.”

Smithville briefly found some footing but never came closer than five the rest of the first set. Walter started rolling with her diverse contributions, adding one of her two kills on a set dump, another ace and then contributing a block in the closing stretch.

Donovan moved Platte County from a 6-2 to a 7-1 formation this year, forcing Walter to play more at the net. She has responded well to the duties in addition to almost exclusively handling setting duties that have helped her pile up her record number of assists.

“I just think it’s good to mix up (the attack) every now and then because otherwise you are so readable for the other blockers, and they’ll follow you,” Walter said. “They’ll follow your hitters, and they’ll probably stuff you. I feel honestly very comfortable (at the net). I’m not the tallest; we all know that — 5-5 — but I definitely work my butt off and try my hardest to get there on every ball.”

Down 1-0 to start the second set, Walter again provided the opening service for Platte County that built a 4-1 lead. Smithville would lead once more at 8-6 before a block from Murray halted a run of four unanswered points, and Hunter, who finished with 10 kills, provided one of her two aces to put the Pirates back in front for good.

A flurry of Smithville errors helped Platte County open a 20-14 lead, and Stehlik, who finished with 10 kills, added an ace to force the first set point. On the third set point, Johnson finished off a 25-19 win. She was the third player for the Pirates to total 10 kills.

“I think that (Murray, Stehlik and Johnson) have done a really good job,” Donovan said. “A lot of times when people think about us, they only think about Kate on the outside. So that leaves a lot of one-on-one or a split block with Karsyn, Kendall, Tati and everyone else because the focus is on Kate. That opens everything else up, and those girls have worked tremendously hard in practice on hitting out of system and the connections with Emerson.”

Murray added four kills for Platte County. Hunter continued her strong all around play with 14 digs, while senior libero Morgan Cox contributed nine and Brown eight in the Pirates’ win.

Platte County closes the regular season this week with a road test at Class 5 Liberty (22-5) before likely finishing off a 12-0 run through Blue Division play Tuesday vs. Ruskin. The Pirates have moved up to Class 5 this season and earned the top seed in five-team District 8. They have a first round bye before playing the winner of Staley and Oak Park in Monday’s semifinal round. The championship, which will also feature either second-seeded Park Hill or third-seeded St. Joseph Central from the other semifinal, is Thursday.

All district games are at Oak Park High School.

The offensive numbers were extremely spread out with Johnson recording a team-high five kills, and Hunter, Stehlik and Brown recording four apiece. Brown pushed her career total to 897, extending her school record set much earlier this season when she passed former teammate and 2021 graduate Aly Anderson (811).

The Missouri State High School Activities Association changing match setups to best-of-five outside of regular season tournament play has led to increased opportunities to manufacture stats compared to previous eras. However, Brown has been a strong four-year contributor, and other top totals have included Morgan Johnson (770) and Maren Mair (688).

The win at Raytown South allowed for a host of players to make the stat line.

Six players for Platte County contributed to the team total of 14 service aces with five for Walter, three for Murray and two apiece for sophomore Jenna Wheeler and Ava Wheeler. Brown and Stehlik added one apiece. The Pirates totaled just 23 digs against an ineffective Raytown South offense with Walter and Ava Wheeler leading the way with four apiece.

The win was the official 38th consecutive for Platte County in Blue Division play, setting them up to hit 39 Tuesday vs. Ruskin.

“We all just found out about the streak recently,” Walter said, “But definitely there is a little bit of pressure there, but we aren’t worried that much about it. We’re more worried about the team we are right at that moment.”