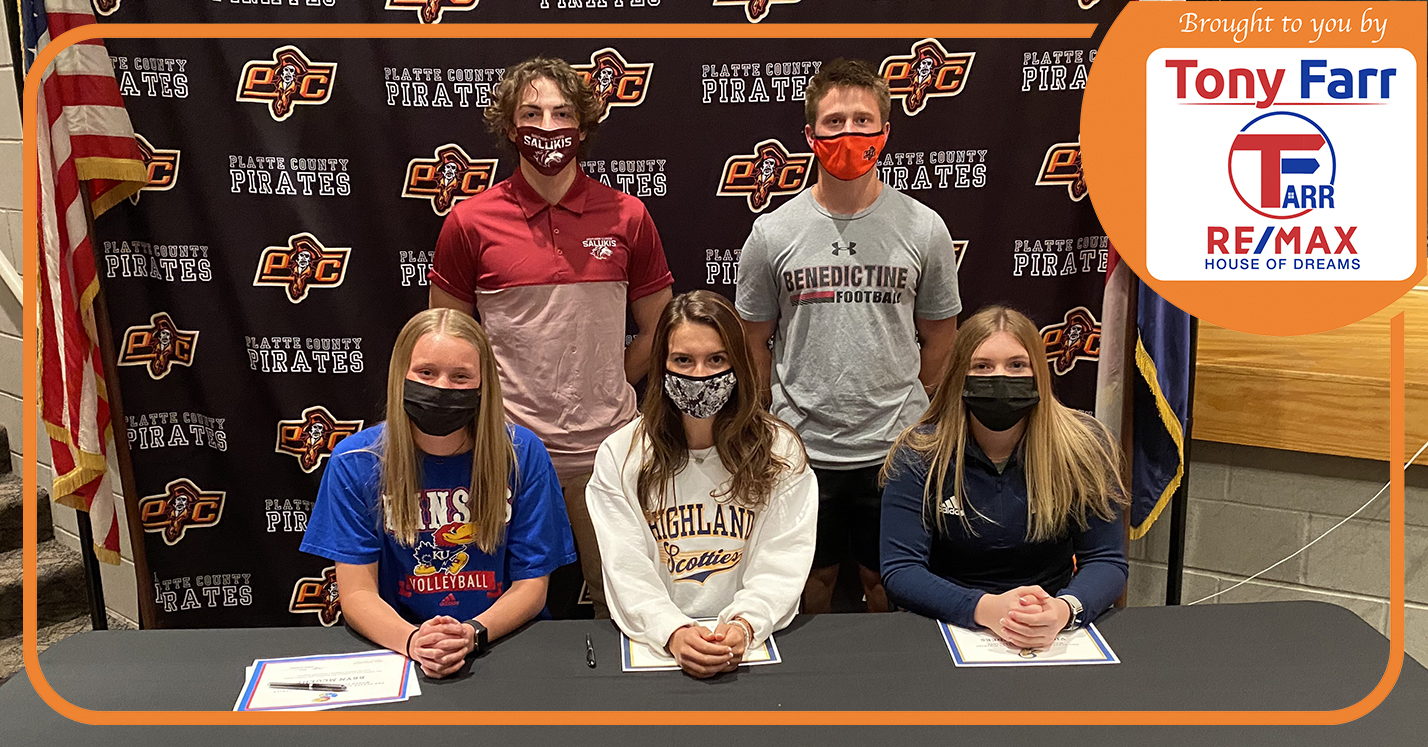 Two more Platte County seniors made official Division I scholarships, likely capping a high volume of athletes from the Class of 2021 going to the next level.

Also a standout track athlete in the 800-meter run and mid-distance relays, McGehe earned Class 4 all-state honors from the Missouri State High School Volleyball Coaches Association for a second straight season. She is now believed to be the first Division I volleyball signee in program history.

Mitchell became a unanimous two-time all-state selection, making the first team on the Missouri media lists and the second team on the Missouri Football Coaches Association lists as a junior and senior. He started the past two years and played a key role in a continually deep receiver corps as a sophomore when he caught three touchdowns, including a memorable game-winner against Smithville.

A nominee for the Otis Taylor Award (top wide receiver in the metro) this past season, Mitchell had 47 catches for 722 yards and a team-high eight touchdowns despite missing one game with an injury. He set career-highs in all categories as a junior (66 catches, 994 yards and 10 touchdowns) and finished his career with 132 receptions (second most in program history) for 1,946 yards and 21 touchdowns.

Mitchell entertained multiple Division II schools, including Northwest Missouri and Central Missouri, before ending up with Southern Illinois, a member of the Football Championship Subdivision of Division I. Platte County senior Collin Tyson did the same when he inked with Eastern Illinois earlier in the year.

Anderson made it two signees from Platte County’s 28-7-2 team that reached state for the first time . She led the Pirates in both kills (328) and digs (375) in a second straight superlative season for the outside hitter. Her 328 kills are a program record for a single season, and the 375 digs were fourth-most for a single season. She added 29 service aces.

Platte County started its season 3-5 overall but went unbeaten in the next 21 straight matches and eventually wrapped up a second straight unbeaten Suburban Conference Blue Division title. Last in the playoffs after a Class 4 district title in 2014 while in the largest of four classifications, the Pirates entered the postseason after clipping Kearney for the Class 4 District 16 title with just two prior playoff wins in program history.

In a reformatted postseason format that included five classifications, Platte County doubled that total with sectional and quarterfinal wins before losing a five-set heartbreaker to Parkway West in the state semifinals. The Pirates came back to top Nerinx Hall in the third-place match.

With the addition of Mitchell and Filger, nine players from Platte County’s large senior class have now signed. The Pirates became the first team in state history to finish as state runnerup in consecutive seasons playing in different classes.

Platte County went 12-2 this past season and lost 42-7 to Jackson in the Class 5 Show-Me Bowl. The Pirates lost in the 2019 Class 4 Show-Me Bowl to Webb City before moving to Class 5 for the first time in program history.

On defense, Platte County only allowed two opponents more than 24 points — 42 in a baffling loss to North Kansas City in Week 4 and the Show-Me Bowl. Filger served as the top “in-the-box” safety as a senior in a mostly 4-2-5 scheme that prioritizes athletic, aggressive defensive backs. He started part of his junior season following a season-ending injury to teammate Cade Fowler and made 25 tackles to go with one pass defended.

Filger experienced a breakthrough season as a senior, putting up career-highs of 72 tackles (6½ for loss), five sacks, two interceptions, one forced fumble and two pass breakups. His best game came in a state semifinal win over Webb City with five tackles, two sacks and a key forced fumble that stopped an early potential scoring drive.

In addition to the state championship game appearance, Platte County won its first Class 5 district title in program history, reached the playoffs and state semifinals for the fourth time in three seasons and claimed its first outright Suburban Conference Blue Division title since 2012 after earning a share of each of the previous two.

A two-year member of the top five, Sanders will go to North Central — a Division III school in Minneapolis — after placing tied for 55th at state as senior with a two-day 206. She shared medalist honors in the Suburban Conference Blue Division Championships with junior teammate Eden Shipp after both shot an 88 at Shiloh Springs Golf Course and became a two-time all-conference performer while leading the Pirates to a fifth straight league title.

Sanders and Shipp were the first individual conference champions for Platte County since 2017.

In the postseason, Sanders finished 12th in Class 3 District 4 to earn her first state berth. Platte County benefited from a new postseason format that increased the number of classifications from two to four and nixed the two-tournament qualification process. All five of the Pirates players finished in the top 18, including ties, to the first state team berth since since back-to-back appearances in Class 1 in 2002 and 2003.

In the Class 3 state tournament, Platte County shot a 780 team total and ended up fifth out of seven teams, just one shot out of a tie for fourth place that would’ve resulted in a state trophy.