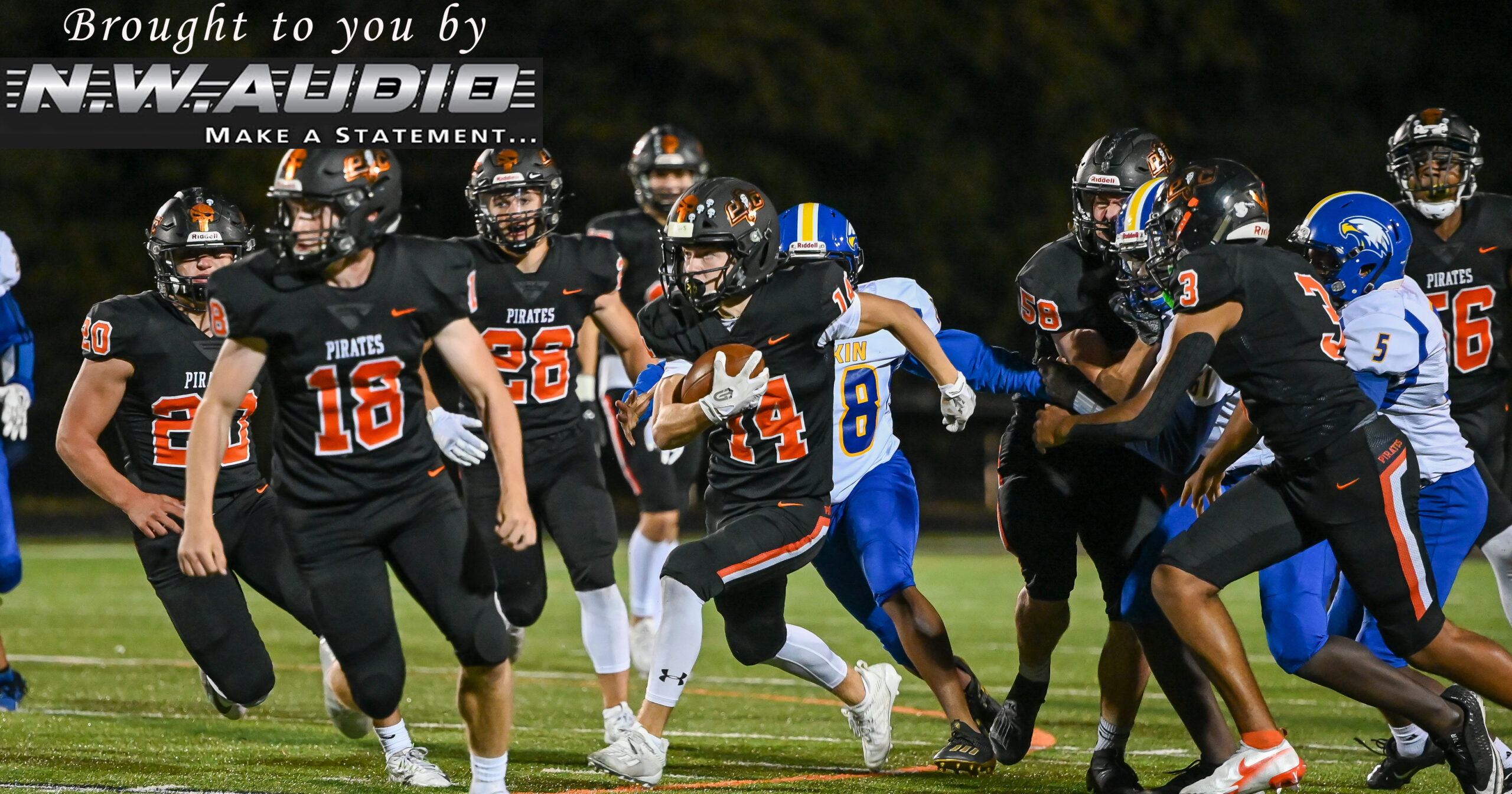 Carter Salzman recognized the play call and knew what the opportunity meant.

Late in the first half and on the 1-yard line, Platte County’s compact sophomore wide receiver took a jet sweep handoff and looked to breach the goal line. Ruskin’s defense appeared ready to make a late first half stand, only to have Salzman fight through a tackle and stretch the ball over the goal line.

Platte County led 56-7 in the closing seconds of the first half of what would be a comfortable victory after Salzman’s first touchdown of the season and his budding career. The late first half rushing attempt for Salzman, his second of the game, provided the perfect opportunity to reward his strong play that frustratingly hadn’t included a trip to the end zone in the first five weeks of the season.

“Been a lot of close calls, but even on the ones you don’t score, I enjoy all of it. As long as we put points on the board, I don’t mind it,” said Salzman, who ran twice for 22 yards and caught one pass for 16 yards against Ruskin to bring his season total to 17 catches for 245 yards. “I was determined. I was looking at them, and I saw that Y sweep. I was excited, and I was not getting stopped before I got in there.”

By the time Salzman scored Platte County’s seventh rushing touchdown of the first half, the result of the lopsided Suburban Conference Blue Division matchup had been determined. The Pirates racked up a season-high 292 yards on the ground with 248 coming before halftime on just 21 attempts for the varsity group, and senior running back Cayden Davis led the way with 158 yards on carries and three touchdowns, while junior running back Ben McDaniel added two more rushing scores with 54 yards on nine carries.

Platte County scored on eight of nine drives and forced two turnovers on defense in a dominant first half that featured few hiccups.

“The No. 1 thing, we came out healthy, which is obviously a plus,” Platte County coach Bill Utz said. “I challenged them to come in and take care of business early and to finish a game, and that’s one of the things we’ve struggled with a little.”

Platte County’s offense was equal parts efficient and potent in the first half with five two-play touchdown drives — two of those in the first four minutes.

After kicking off to start the game, Platte County sent a blitz of junior linebackers Blaine Keuhn (three tackles, one for loss; 1½sacks) and Trevor Scott (one sack) on the first snap and forced Ruskin quarterback George Pledger into an intentional grounding penalty near the goal line on the first play. He immediately went out with an injury, although he would return and split snaps with Marius Hill.

Ruskin (1-4, 0-3 Blue Division) went three-and-out again, and two plays after a punt, Davis knifed through the middle of the defense for a 45-yard touchdown run to make it 14-0 after just 4 minutes.

Platte County’s only real adversity came after the next defensive stop. Ruhnke threw a pick-six on first down to make it 14-7, but the Pirates would score on their final six possessions of f the first half to take a 56-7 lead into halftime.

“There were very few mistakes,” Utz said. “Like I said, other than the one interception return, I thought we played well. We’ll have to watch film of course. There were a few things I know they did that we corrected, and again, any time you have a mistake, and we’re able to correct it in game, that’s a huge plus for us.”

Stearns and Scott lead Platte County on the season with five apiece, and the Pirates allowed just seven points for a second straight week. In fact, the defense is responsible for allowing only 51 points through six games.

Following Ruskin’s interception return for a touchdown, a penalty wiped out senior wide receiver Dayton Mitchell’s 92-yard kickoff return for a score, and Platte County needed six straight runs, capped with a 5-yarder into the end zone from McDaniel to reclaim the 14-point lead before the end of the first quarter. Ruhnke, who ended up just 4 of 7 for 94 yards with his lowest output matching up the first lack of need for the potent air attack, then reached the end zone with a 14-yard scramble on the second play of a quick drive to make it 28-7 early in the second quarter, and the rout was on again.

The next touchdown drive was another two-play edition with Salzman running for 21 yards and Davis scoring on a 25-yarder.

Platte County’s defense then forced its first turnover on what otherwise was a long gain assisted by a holding penalty. However, the Pirates didn’t have to take the flag when Stearns tracked down Hill from behind and knocked the ball loose.

Brooks fell on it for his second turnover of the year while playing behind Scott and Keuhn on the depth chart.

“I’ve just been relying on my D-linemen to put me in a place where I can make plays,” Brooks said. “Stearns forced that fumble, and I was able to just fall on it.”

Rollins had his second and last catch of the game, a 35-yarder, off of the turnover, and McDaniel made it 42-7 on a 15-yard run with 5:14 left in the first half. Davis’ final touchdown run was a 21-yarder on the fifth and final two-play touchdown drive of the night, and the Pirates appeared headed into halftime with a comfortable 49-7 lead and a running clock in effect for the second half.

Instead, the ensuing kickoff from soccer-player-turned-backup-kicker Sawyer Allen hit the Eagles return man in the facemask.

The ball bounced straight to Platte County senior cornerback Spencer Cupp, who recovered at Ruskin’s 20. McDaniel ran for an initial first down, but facing third and goal at the 1, Salzman made the most of his third and final touch.

“I knew I was close (to the end zone), and I was like, ‘This is the time if it’s going to be any time,’ so I lowered my shoulder, I extended that ball and I got in there,” Salzman said.

A revamped offensive line, playing again without senior center Grant Gomel after he tore his ACL late in the first half against North Kansas City two weeks earlier, received a jolt of confidence in the efficient effort. Platte County’s up-front unit had a fourth different setup in six games this season, moving senior second-year starter Trey Butcher back out to left tackle, while senior Jesse Schillinger went inside to center. The right side of the line with senior Colby Guffey at tackle and junior Joe Nicholson remained intact, while junior Caleb Kelley made his second straight start at left guard.

Davis and McDaniel have had their two best games in back-to-back weeks.

“Both of them (Davis and McDaniel) are solid runners,” Utz said. “In order to get the running game going, you have to have the offensive line. The more reps they get and continuity is a blessing. In game situations, they need to be able to do that, and I thought they did a nice job tonight.”

Platte County rested its starters in the second half ahead of what will now be another big showdown. Continuing to sit atop the Class 5 District 8 standings, the Pirates remained at No. 6 in the most recent statewide media poll, having recovered from its disastrous loss to North Kansas City in Week 4 — a result that could loom large in the eventual district seeding.

This week, Platte County travels to North Kansas City High School to play unbeaten Winnetonka (6-0), which came back from a 16-0 halftime deficit to upend Kearney 20-16 last week to improve to 4-0 in Blue Division play. Platte County won both meetings with Winnetonka last year, including a Class 4 District 8 matchup before the Pirates were bumped up a class in this year’s unique season, but the Griffins caused a lot of problems and returns talented players at the key skill positions on offense.

Each of the past two years, Platte County has shared the conference title, and Winnetonka has the chance to play spoiler.

“You get to this point in the season, and those things are on the horizon,” Utz said. “The conference is starting to show what it’s going to look like a little bit, so it’s obviously a great opportunity to be in a situation to be up in that top group and be able to take care of ourselves a little bit.”

Winnetonka has yet to play a team with a winning record this season and also has Smithville in the regular season finale. That means a win this week for Platte County and another against downtrodden Raytown South the following week could result in the first outright Blue Division championship in program history. The Pirates previously shared in 2012, 2018 and 2019.

In addition, continued wins should keep Platte County atop the Class 5 District 8 standings despite a loss to No. 2 North Kansas City (4-2), which had four return touchdowns to overcome a 31-7 deficit in Week 4 and steal a 42-37 victory. The Pirates beat No. 3 Park Hill South 35-17 in the season opener, but the Panthers improved to 4-2 with a win over No. 4 Staley on Friday.

Staley was coming off a win over North Kansas City.

With Park Hill South just percentage points back of North Kansas City for the second spot, the district standings could further shuffle, and Platte County could still earn a first-round bye in the seven-team bracket. However, North Kansas City remaining at No. 2 would result in the Hornets taking the top seed via head-to-head result scenarios that allow a team to move up one spot.

Regardless, Platte County has plenty to play for in preparation for the program’s first ever season in Class 5 coming off the Pirates’ first Class 4 Show-Me Bowl appearance.

“Every game counts in the district seeding. With a new district, we’re watching those scores to see where it is and try to predict and get prepared,” Utz said. “We’ve talked about Class 5 and introduced as an opportunity that by moving up it creates a whole new challenge, but at the same time, the goals and expectations remain the same.

“It has a new number in front of it, but we’re still trying to accomplish the same stuff.”