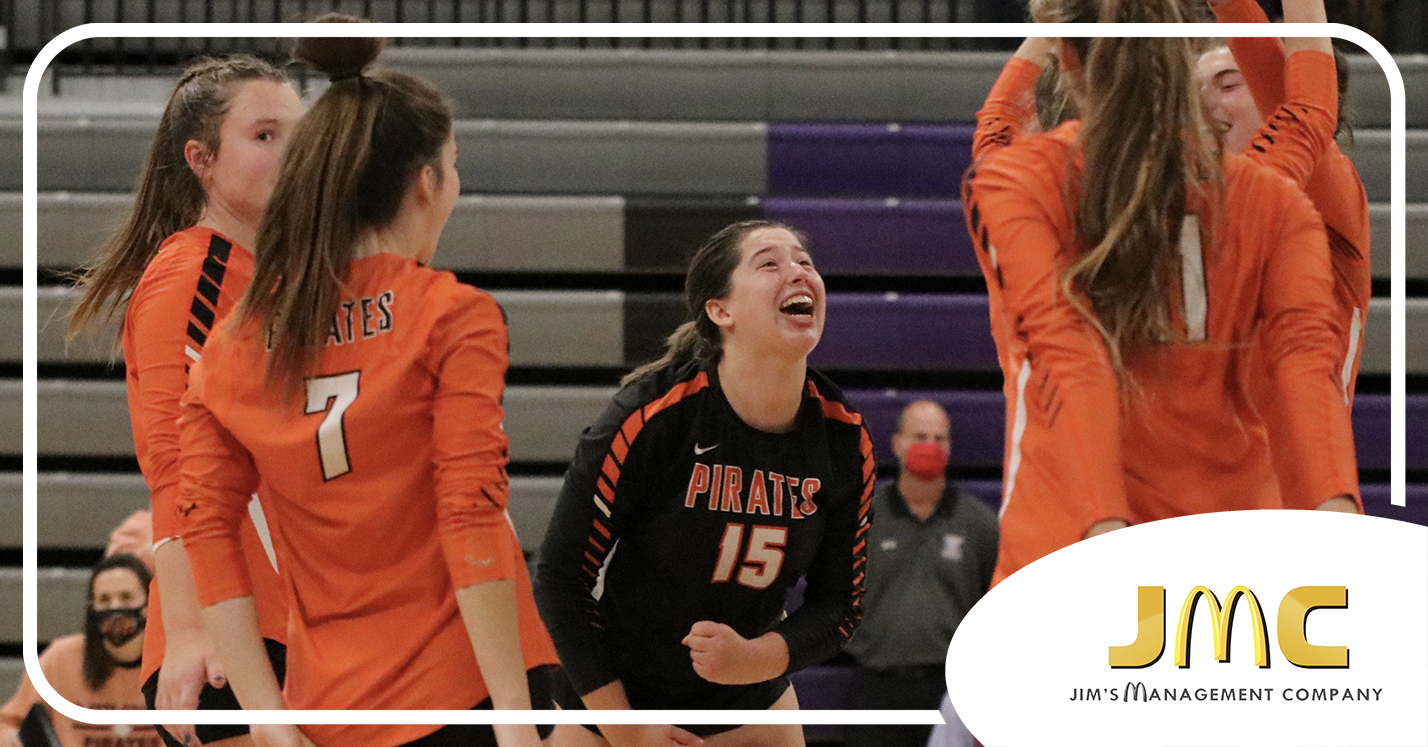 Platte County senior Morgan Cox reacts to the winning point in a 25-10, 25-15, 25-20 victory over Kearney on Thursday in Kearney. ROSS MARTIN/PC Preps Extra

Platte County encountered likely one of the toughest hurdles to keeping the streak alive and cleared the bar with no problem. The Pirates were dominant almost start to finish in the sweep of Kearney, making it 31 straight in Blue Division play. The streak dates to the middle of 2018 with 12 of the past 14 won in three sets.

“Is it really? Well, that’s exciting,” Donovan added. “Yeah, that’s just a testament to the athletes we have and the hard work they put in during the season and the offseason, as well. Kearney’s always just a tough game both physically and mentally.”

In 2020’s record-setting run to a third-place finish in Class 4, Platte County senior setter Emerson Walter set the school record for service aces in a season, but the Pirates have displayed impressive depth in that facet of the game during an up-and-down start to the season.

“I noticed this summer we were going to be a tough serving team,” Donovan said. “I know we had a lot of service errors tonight, as well, but we also had a lot of aces so it really counterbalances. We are definitely a good, aggressive serving team. Last year, a lot of people just remembered Emerson with serve, but this year, it’s Kate Brown; it’s Emerson; it’s Morgan; it’s really anyone that goes back there to serve.”

Brown ran off eight straight service points to punctuate a dominating opening set. She serve up three aces during the 9-0 closing stretch, turning a 16-10 lead into a 1-0 advantage in sets.

“I was just rolling; I’m going to be honest with you,” Brown said. “It’s just the energy of the game, the momentum. I just kind of got into a good roll, a good rhythm.”

However, Kearney jumped to a 7-2 lead in the second set, but an ace from Hunter and a kill from Brown were part of quick comeback that tied the score at 9-9. Another ace from Hunter gave the Pirates an 11-9 lead and forced a timeout from the Bulldogs.

Platte County also trailed 5-4 early in the first before outscoring Kearney 21-5 the rest of the way. The Bulldogs would record back-to-back blocks midway through the first to crawl within 15-9 but were never closer.

“It’s always a little disheartening when you win as big as you do in that first set,” Donovan said. “We told them in the second set, ‘You need to come out focused from the start.’ That wasn’t really the case, but I felt like they did a good job of regaining their composure.”

Timeouts in the first and second set from Kearney did not stop the momentum.

In the second set, Hunter served up two more points to make it 13-9. Walter, who finished with 31 assists, eventually contributed a slick setter dump for one of her three kill to put Platte County up 22-11, and the second-set blowout seemingly ended the competitive portion of the match. The Pirates wouldn’t trail in the third and were only briefly tied at 2-2.

A block from junior Karsyn Stehlik put Platte County ahead 13-6 and forced another timeout. The Pirates would lead by as much as 16-6 before problematic passing and serve receive gave Kearney a lifeline.

An ace from Kearney junior Moira Olberding just grazed the line to close the gap to 19-15, and after Donovan took a second timeout, Platte County nearly saw its chance at a sweep disappear.

“I think we got a little complacent with where we were in the (game) and started getting a little lazy in serve-receive — not moving our feet, not being disciplined,” Donovan said.

Platte County allowed Kearney within 21-19 in the third set, but a thunderous kill from Brown ended the match. The Pirates improved to 6-0 in the last six meetings between the rivals, and that includes going 3-0 a year ago including the Class 4 District 16 championship match. All three of the 2020 wins were by a score of 3-1, and the Bulldogs were the last team to beat them in conference play in 2018.

Hunter added eight kills in Thursday’s match to go with four digs and a team-high 16 successful serve-receives. Stehlik also had eight kills and three blocks. Stehlik and sophomores Tatianna Murray (four blocks) and Kendall Johnson (five kills) have been part of a revamped middle blocker/hitter rotation that has helped fill a gap left by the graduation of Haley Luna, who was instrumental in helping the Pirates reach the state semifinals for the first time in program history last season.

The Pirates opened Blue Division play with another clean sweep Tuesday at Platte County High School after a week off since the home opener against Park Hill.

Dominant start to finish, Platte County extended the playing rotation in the 25-8, 25-18, 5-9 victory. Brown (eight kills), Johnson (eight kills) and Hunter (seven kills) still led the attack at the net for the Pirates, who benefitted from 19 service aces. Hunter provided a match-high five, while Brown added four and Cox three with Walter, Johnson and Ava Wheeler each finishing with two.