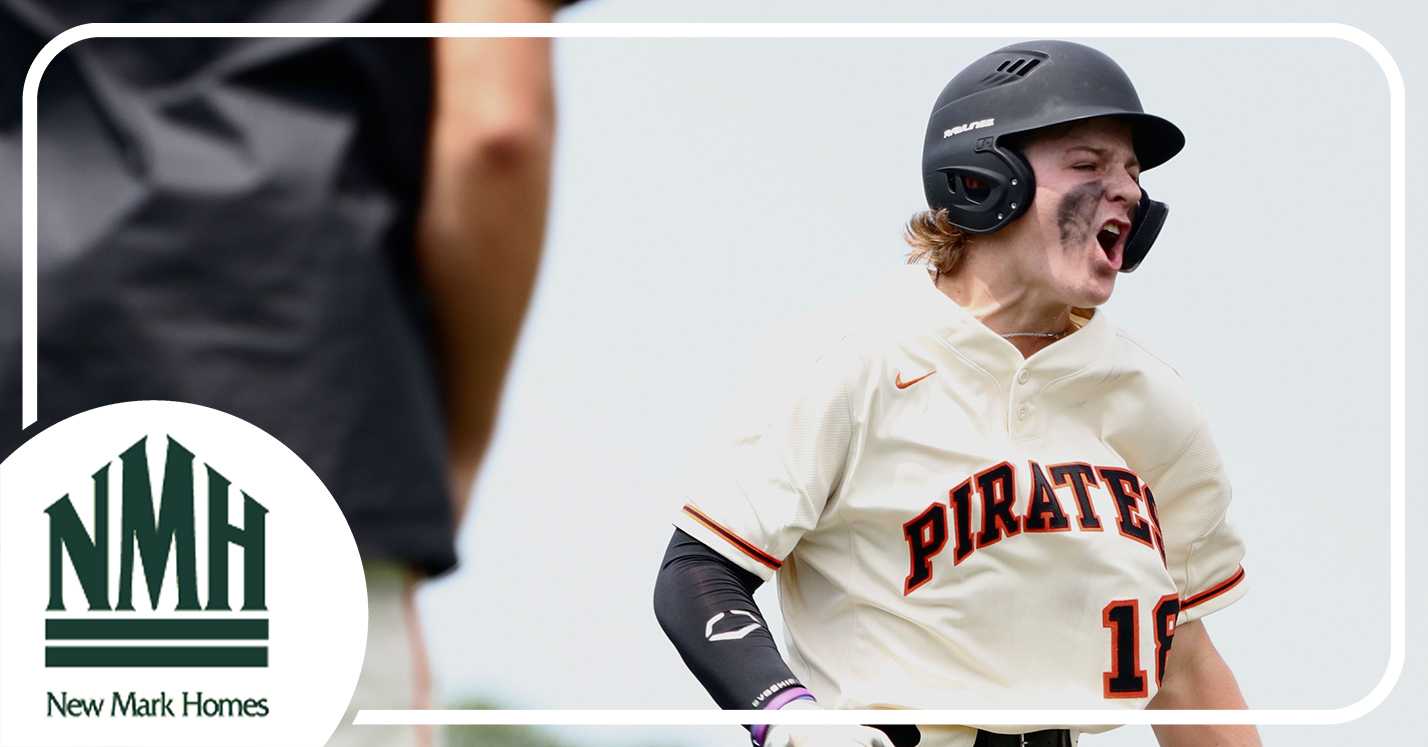 When an opportunity to put a run-rule victory passed by, there seemed little reason for concern.

However, Platte County continued a recent patter and endured some unnecessarily nervey moments late in what ultimately ended up an 11-7 victory over visiting Webb City on Saturday in a Class 5 quarterfinal at Platte County High School. The Pirates ended up only needing the eight runs score in a marathon bottom of the second inning to advance to the state semifinals for the first time in two decades.

Platte County sophomore left-hander Brayden Carter made a clutch relief appearance, retiring the final eight batters in a row. Eight players scored at least one run and seven provided at least one hit for the Pirates with sophomore center fielder Devin Wassmann leading the way. He finished 3-for-4 with a monstrous two-run home run, a pair of singles, three RBIs and two runs scored, and junior third baseman Nick Baker went 2-for-3 with a triple, double, walk, and two runs batted in while freshman second baseman Dayton Doll jumpstarted the entire onslaught with a two-run triple to right field.

This certainly wasn’t the first time Platte County halted a comeback bid, and the Pirates now have two in a row on an increasingly big stage.

“We’ve been in that situation all year where we capitalize early, and (the opponent) slowly start to comeback,” Wassmann said. “But we have faith in our teammates. You know, it sucks, but we always find a way to get out of it. I’m in shock. This season, I was like I’m just going to have fun. I would not expect to be in this situation right now, so it feels really good. It’s an honor.”

Webb City (19-16), the surprise winner of District 7, ended up scoring seven unanswered runs between the fourth and fifth innings to close within 10-7 before the comeback came to a halt.

Platte County senior starter Sawyer Allen threw three perfect innings, but the left hander ran into trouble with one out in the fifth. The Cardinals chased him and ended up tagging him for four runs in 4 1/3 innings on only three hits and two walks. The Pirates answered right back with Wassmann’s two-out RBI single to score senior shortstop Cameron Lewis, who went for 2-for-3 with three runs. All 11 of the Pirates’ runs were scored with two outs.

“It feels good,” Baker said. “I want all the seniors to be able to take this home, win state before they go off to college. For some of them, it’s their last games, so try to make it the best for them, too.”

With Allen rolling early and recording four of his five strikeouts while retiring the first nine batters he faced, Platte County built a big lead with an almost unbelievable parade of two-out hits in the bottom of the second. Wassmann reached hustling into second on a ball dropped in left field with two outs in the first but ended up stranded.

Platte County’s second started with back-to-back walks for senior designated hitter Eli Nelson and senior catcher Jake Knudsen. After a lineup, Doll came up in the nine hole and lofted a fly ball up into a stiff wind blowing out, and the carry ended up leading to a triple off the wall in right field to score both runners and make it 2-0.

Just over a week earlier, Doll had a two-run triple in Platte County’s seven-run first inning on the way to a 10-8 victory over Smithville in the Class 5 District 8 championship.

“I saw the guy just kept going back and back, and I’m like, ‘Go ball, go,’ and hits off the side of the wall,” Platte County coach John Sipes said. “That kid, he’s just been so clutch since districts. He’s just been on fire and a huge aspect of the bottom of the order producing.”

With the lineup turned over, Platte County junior right fielder Dayne Wimberly doubled home Doll to make it 3-0, and Lewis singled him home. Wassmann’s single moved Lewis first to third, and Pirates junior Dylan Robertson singled in one ahead of Baker’s two-run triple to deep center field to extend the lead to 7-0.

Nelson walked for the second time in the inning, and Knudsen’s single to left field scored Baker. Thirteen batters came to the plate to help build the 8-0 lead.

“I think it all blurred together,” Baker said. “Everybody’s just hitting the ball, hitting gaps, getting singles and scoring runs.”

Webb City went down in order again with Allen recording a pair of strikeouts against the bottom third of the lineup.

Platte County immediately put the run-rule into play in the bottom half of the third inning when Wimberly walked with one out. After Lewis grounded into a fielder’s choice but avoided a potentially inning-ending double play, Wassmann came up for his third at-bat, but this one came against left-handed reliever Gavin Stowell, who came on in the second in relief of senior starter Cooper Crouch (1 2/3 innings, five hits, two walks, two strikeouts and seven runs allowed).

Stowell put Wassmann in a 1-2 count but made a mistake with a fastball, which the left-handed Division I commit launched about 10 feet inside the right-field foul pole and well over the wall for his team-leading fourth home run. Webb City rightfielder Jeremiah Leaming never moved from his spot in the grass as the ball sailed out.

“I saw a fastball. I was thinking middle,” Wassmann said. “My teammates got something rolling, and I’m just thinking I’ve got to be a good team player and just hit the ball in the gaps, and it happened to go out so I’ll take it. It felt nice. Knowing my teammates were excited and we’re just rolling, that’s all the matters, but yeah, it felt good.”

Allen, who threw a six-inning perfect game against Winnetonka earlier this year, didn’t show any signs of facing serious issues even after allowing a a single and double in the top of the fourth. He came back with his fifth and final strikeout, allowed a run-scoring sacrifice fly and then escaped with the lead still at 10-1.

However, Platte County missed a chance in the bottom of the fourth to put Webb City down to its final three outs. Baker led off with a walk, stole second and advanced to third when the Cardinals catcher dropped the third strike to Knudsen, who was the second out of the inning. Stowell, who went three innings and walked three and allowed four hits, stranded Baker 90 feet away with a strikeout.

Allen walked two with a double in between to load the bases with one out in the fifth and then exited the game, seemingly frustrated with what he saw as a shrinking strike zone from the home plate umpire.

“He’s an unreal pitcher,” Wassmann said. “He’s a great teammate, a great pitcher. All our (players) trust in him. He does the right thing, and we play good defense behind him.”

Sipes initially went to junior right-hander Dylan Zimmerman, who reached da two-strike count on the first batter he faced but never recorded an out.

The three batters he faced accounted for an RBI singles and back-to-back two-run doubles to close the deficit to 10-6. Carter came in for Platte County with a runner at second and gave up a softly hit two-run double down the left field line on an 0-2 count before coming back with a groundout and the first of his four strikeouts to keep the Cardinals down 10-7.

“They got close; they came back,” Baker said. “We needed to capitalize on all the possible outs we could be getting.”

Carter then settled in with his breaking ball keeping hitters off balance, and the extra insurance run from Lewis and Wassmann allowed Sipes more leash. He stuck with Carter the rest of the way with the Webb City bats again going quiet against a pitcher not even part of the staff until midseason.

Debuting with a start against Liberty North midway through the season, Carter forced his way into more opportunities on the mound after going six-plus innings in a win over the Class 6 state semifinalist.

“In fact, the entire pitching staff right now outside of (Allen) are guys that were on the radar but at the bottom of the depth chart,” Sipes said. “They’ve all stepped up and just filled roles and taken off with them.”

Carter struck out two in the sixth and needed just five pitches to record the first two outs of the seventh on a fly out to Platte County senior left fielder Landon Fulk and a ground out to Lewis at shortstop. He then struck out senior Cade Wilson on three pitches with Knudsen throwing down to Robertson on the dropped third strike to record the final out, clinch the victory and set off an excited but overall brief celebration on the field at the Pirates’ brand new stadium, which opened in time to start this season.

The quick rebuild the past two seasons has been impressive.

Platte County went into last season with only one player having significant varsity experience coming off the 2020 cancelation due to COVID-19. The Pirates still ran off a winning record but disappointingly bowed out in the Class 5 District 8 semifinals.

However, Sipes believed the foundation had been set, and Platte County came back this year, winning 15 of the last 17 and wrapping up a share of the Suburban Conference Blue Division title. The Pirates moved all the way to No. 4 in the final Missouri State High School Baseball Coaches Association Class 5 polls and now have legitimate state championship hopes after surviving for a more-difficult-than-expected 4-2 win over Winnetonka in the District 8 semifinals and then building big leads before holding on late in the championship game against Smithville and the quarterfinal against Webb City.

“It was the beginning of last year,” Sipes said. “We thought we had a chance to win our district last year, but we thought this was going to be our year. This is the year we basically set forth and earmarked as our state title run.”