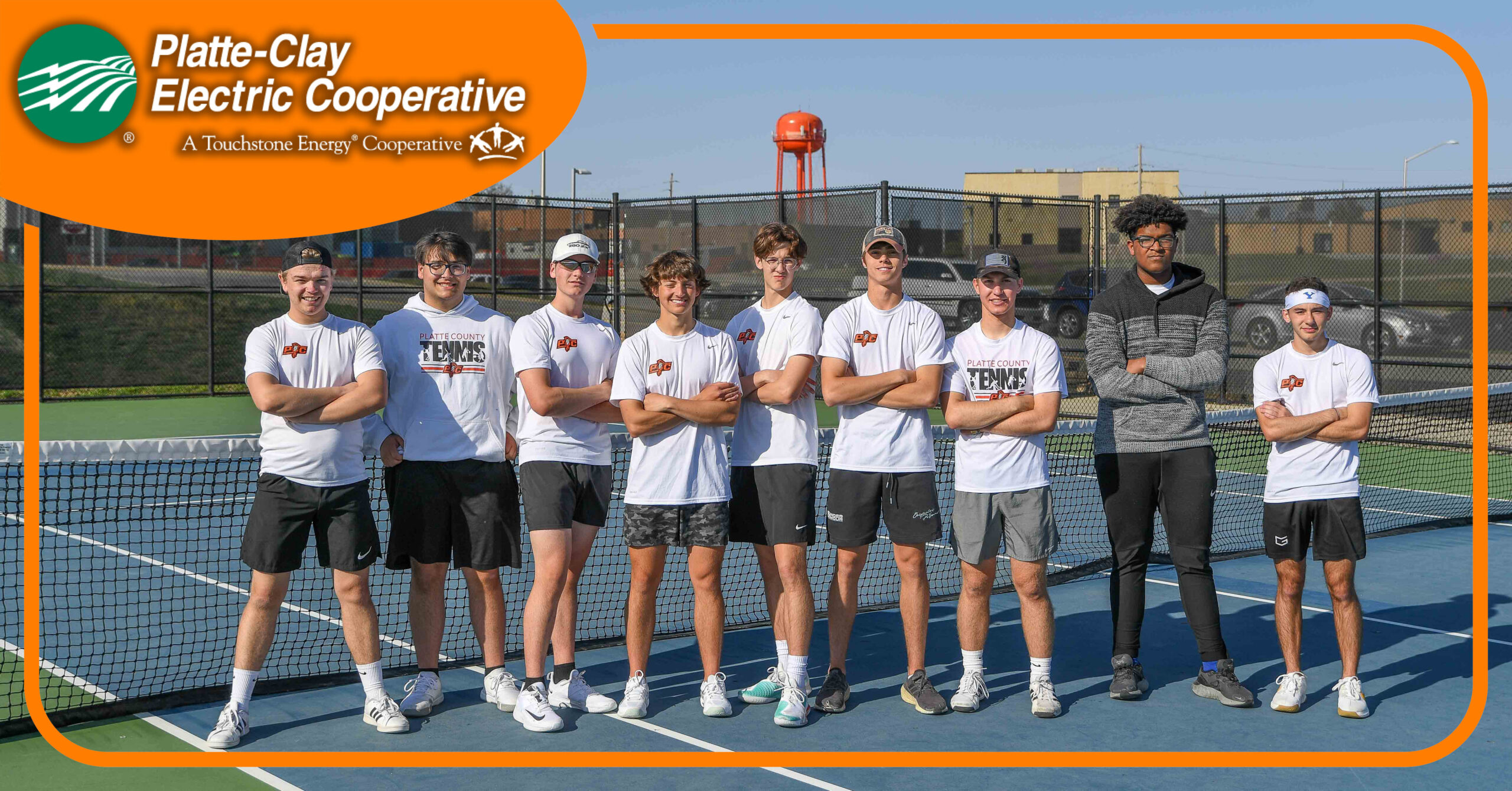 Platte County's seniors pose for a picture after a 9-0 win over Grandview on Tuesday at Platte County High School. TODD NUGENT/PC Preps Extra

Platte County concluded a final, busy full week of the start of postseason play against more top-tier competition, placing fourth in the nine-team Northland Invitational on Saturday at Oak Park High School. Leading up, the Pirates alternated tight losses to tough competition with wrapping up the Suburban Conference Blue Division title and locking up the No. 2 seed in the Class 2 District 8 team tournament with resounding victory over William Chrisman.

In summation, Platte County looks ready to make another run at more program history in the second yard playing in the middle tier of three classifications.

Park Hill (56 points) edged rival Park Hill South (48 points) for the Northland Invite team title with St. Joseph Central in third and Platte County just four points out of second but fourth overall with 44 points. There were four flight brackets — two singles and two doubles — and the Pirates placed all four entrants into the semifinals.

Platte County sophomore Gavin Nichols led the way, seeded No. 2 in A singles and rolling to the title match with 8-2 victories over Oak Park’s Ethan Schweisberger and Staley’s Liam Colebank. St. Joseph Central junior River Flaska topped Nichols for the third time this season, prevailing 8-3 this time around to take the title.

In the other three flights, Platte County junior Jack Forrest (B singles), senior Austin Vanek and junior Nathan Vanek (A doubles) and senior Shane Duggan and freshman Jack Bralley (B doubles) all ended up in the third-place match, and all three entrants wound up fourth. Duggan and Bralley ended up winning a pair of matches in their bracket, prevailing in a first-round pairing and then upsetting Staley’s top-seeded Logan Williams and William Thomsen 8-4 to reach the semifinals.

Duggan and Bralley dropped the last two matches and finished with a 2-2 record.

Forrest entered with the No. 1 seed in B singles but dropped his semifinal in a tiebreaker to Park Hill South’s Miles Bingham. Forrest lost a second tight match (8-6) to Statley’s second-seed John Tarpley. The Vanek brothers were unseeded but upset fourth-seeded Andy Duong and Jason Nguyen 8-5 to reach the semifinals before losing to the top seed and the third seed to finish the tournament.

Platte County and ninth-place Kearney were the only Class 2 schools in the field and will be in the District 8 bracket, which is yet to be released. Both teams will also compete in Friday’s individual tournament at Grain Valley High School with two singles and two doubles entrants per team.

A year ago, Nichols claimed the singles title becoming the first district champion in Platte County history and the first Missouri State Tennis Championships qualifier in more than a decade. No one for the Pirates had ever gone in singles before, and he came back with a program-first medal, placing seventh.

Nichols and Austin Vanek are the only returners from last year’s top six, and the latter paired with Emilio Escamilla — one of four graduated Platte County seniors from 2021 — to finish fourth. The top two in each bracket qualify for state, and the Pirates had all four entrants in the semifinals and will look to increase the state contingent this time around.

In addition, Platte County will likely be the No. 2 seed with a rematch with William Chrisman the likely semifinal scenario. Grain Valley will be the No. 1, having a tight 5-4 win over the Pirates on the ledger.

Platte County (5-6) will be hoping to hold seed, avenge that loss and earn the first team playoff berth in program history.

Even minus Austin Vanek, the Pirates swept the singles and won all but one singles match Friday at Platte County High School.

In doubles, Nichols and Forrest continued to team at No. 1 in the new preferred setup and came away with an 8-2 win, as did Bralley and Duggan moving up to No. 2. Nathan Vanek then teamed with athletic senior Nathan Macaluso at No. 3 for an 8-4 victory.

Platte County likely locked up the No. 2 seed in districts with the win, while William Chrisman will likely take the No. 3 over Kearney (No. 4) and Lincoln Prep (No. 5).

With competitive scores up and down the lineup, the Trojans took 4 of 6 singles matches to come away with a nonconference dual victory Wednesday in Kansas City.

Platte County trailed 2-1 out of doubles with Austin and Nathan Vanek sneaking by at No. 2 with a 9-7 victory, while Nichols and Forrest lost in a tiebreaker at No. 9-8 (10-2). Even Bralley and Duggan held tight at No. 3 before falling 8-5.

In singles, Park Hill won in a tiebreaker at No. 2 and added victories at Nos. 3, 5 and 6 to wrap up with the win. Nichols topped Trojans senior Ethan Slaggie 10-5 at No. 1 and Nathan Vanek came away with a 10-6 win at No. 4 for Platte County’s two victories.

The Pirates honored 10 seniors during the Blue Division finale Tuesday at Platte County High School, giving all but one of them a match and the opportunity to wrap up a second straight conference title and just the third in program history.

Austin Vanek moved back up to No. 1 in singles, a spot he held at the start of his junior season as the top returner following the unique canceled COVID season, and came away with an 8-0 shutout, as did Duggan at No. 2 and Macaluso at No. 3. Cade Fish, Tyler Bean and Ben Below made their varsity debuts and only lost two total sets between the three of them.

In going 4-0 in Blue Division play, Platte County lost only match total — coming against Kearney — in addition to sweeps of Winnetonka, Ruskin and Grandview.

Playing a tough schedule, Platte County’s six losses include three by a score of 5-4 and two more by a score of 6-3. Savannah, a strong Class 1 program featuring one of the best singles players at that level, jumped to early leads in all three doubles matches and managed to hold on despite some comeback efforts.

In singles, Nichols lost at No. 1 to Cole Horton, meaning a sweep of the last five would be necessary for Platte County to storm back and steal the victory. Austin Vanek prevailed in three sets at No. 1, and Nathan Vanek closed the gap to 4-2 with his victory at No. 4. Two of the last three matches went to a third-set tiebreaker with Bralley (No. 5) and Duggan (No. 6) accounting for wins, while Forrest dropped his tough match.