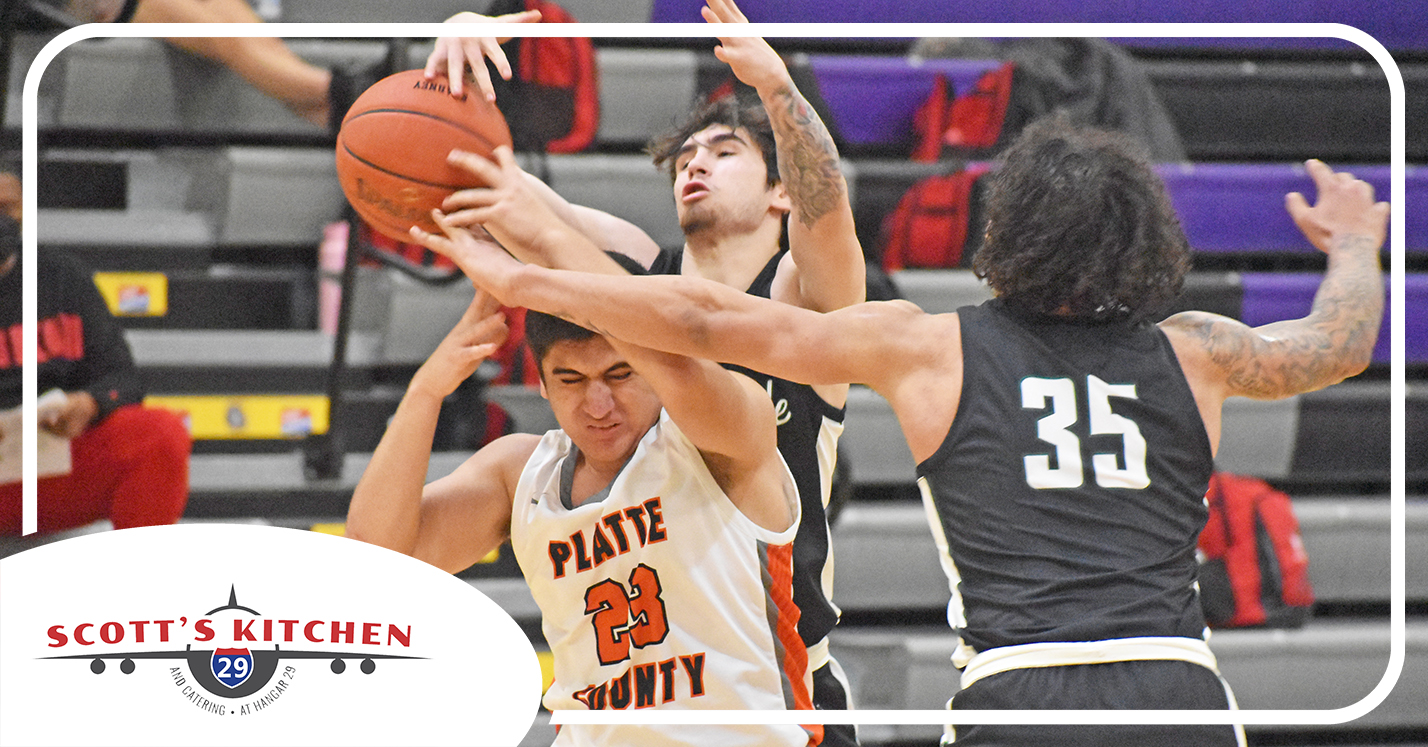 After falling in the semifinals game of the Bulldog Classic, the Class 5 No. 10-ranked Pirates came back with a 64-55 win over St. Joseph Lafayette on Friday night at TDR Auto Fieldhouse. The loss a night earlier to Class 6 power Blue Springs gave way to a more physical and sustained effort to earn a third straight win over the Fighting Irish and the third-place trophy in the tournament.

“There are a lot of positives things to takeaway/ A thing about a loss, a loss can be good if you will learn from it,” Platte County coach Rick Hodge said. “I think we learned, but I also think that prepared us for tonight — athleticism, taking us off the drive, handling the pressure. Tonight was not a physical pressure that Blue Springs gave us but a lot more pressure in closeness to us.”

Platte County junior forward Chandavian Bradley continued his impressive run of play with a game-high 23 points. He started consecutive big plays for the Pirates late in the third quarter that turned a tight 43-41 lead into a six-point advantage.

Bradley’s massive two-handed dunk on a pass from senior point guard Jace Trimble kickstarted an 8-2 run. An offensive rebound and putback from senior forward Brody Fulk followed, and sophomore reserve Judah Vignery hit two free throws with 21 seconds to go in the third quarter to cap a quick a 8-2 run and take command against their former Midland Empire Conference rivals.

A basket from Bradley opened the scoring in the fourth and gave Platte County a 53-43 lead, the largest advantage in the game up to that point. Pirates senior guard Jarett Mueller’s 3-pointer with 4:38 to play in regulation extended the advantage to 58-45.

Lafayette, which held a 10-1 record against the Pirates before the current three-game losing streak, rallied behind Camden Bennett and Drake Dawson. The Irish cut down the 13-point deficit to seven following a basket from Bennett – the younger brother of current Missouri Western guard Caleb Bennett – with a little more than 3 minutes to play.

“I keep talking about the difference between a good team and a great team. A good team will go in lulls and let teams back; a great team doesn’t allow that,” Hodge said. “If we want to take the next step to being a great team, we can’t go into lulls, whether it is bench play or guys out of position or lapse in judgment or focus or getting our job done. We can’t have that. We can’t let teams hang around and let teams back. That is what this team struggles, what a lot of teams struggle with.

“OK, but our seniors need to not allow that to happen as much as they do.”

Platte County scored the next two baskets, one from Fulk (10 points) and Bradley his final basket with a little more than a minute to go. Bradley and Mueller, who had 19 points, were both named to the all-tournament team.

“It felt good to win/. It was good to get our feet back under us,” said Mueller, who hit five 3-pointers. “We had lost two of three, so to get a win against a tough team feels really good. They are really scrappy. Not as big as us and that helped Chandavian. He played really well with his size and quickness.”

Bradley made 11 of the team’s 25 field goals in the game. Bennett led Lafayette with 18 points and was also an all-tournament team selection.

The two teams will meet again on Feb. 10 in St. Joseph.

“It will be a lot different atmosphere, a lot more pressure, which is good,” Hodge said. “We need our guys to need that challenge. I think we will. I’m confident.”

The Pirates nearly pulled off a big comeback in the semifinal loss against the Wildcats, which would win the tournament title Friday night over North Kansas City.

Blue Springs held a 10-point lead at halftime and then got a combined 19 points from Ike Ezeogu and Mike Harrison in the third quarter. That made it 60-42 going into the fourth quarter, but the Pirates rallied as six players combined to score 24 points in the final 8 minutes.

Mueller had six points in the fourth, while Bradley and senior forward Isaac Havemeier had five points each.

“They didn’t quit. They just kept playing and kept battling,” Hodge said. “They kept battling and that is what I like about this team: they won’t back down from anyone. They welcome those challenges and even did with the score where it was. They made it fun and made it close.

Blue Springs had a pair of 3s from Kyle Bruce and Ezeogu hit 5 of 7 free throws late to seal the win in the fourth. Ezeogu finished with 30 points, while Bruce had 10. Harrison was second on the team in scoring with 19 points.

“Blue Springs is good and they are one of the better ones in the city,” Hodge said. “They are good, especially at defense. I was concerned, but physically, they handled it as well as we could. We fell behind. They are athletic and they took us off the drive and we gave up too many easy ones. From there, we made a late run going to the half-court trap.”

Platte County had four players scoring in double figures, led by Havemeier’s 17. Bradley and Mueller added 15 apiece, while Trimble had 10. Bradley was 8 for 9 at the free-throw line, while Mueller was 4-for-4 – all of his in the fourth quarter.

“On a bad night we showed we can hang with one of the top teams in the city,” Mueller said. “We didn’t play well. If we play them on a good night, I’d like to see what happens.”