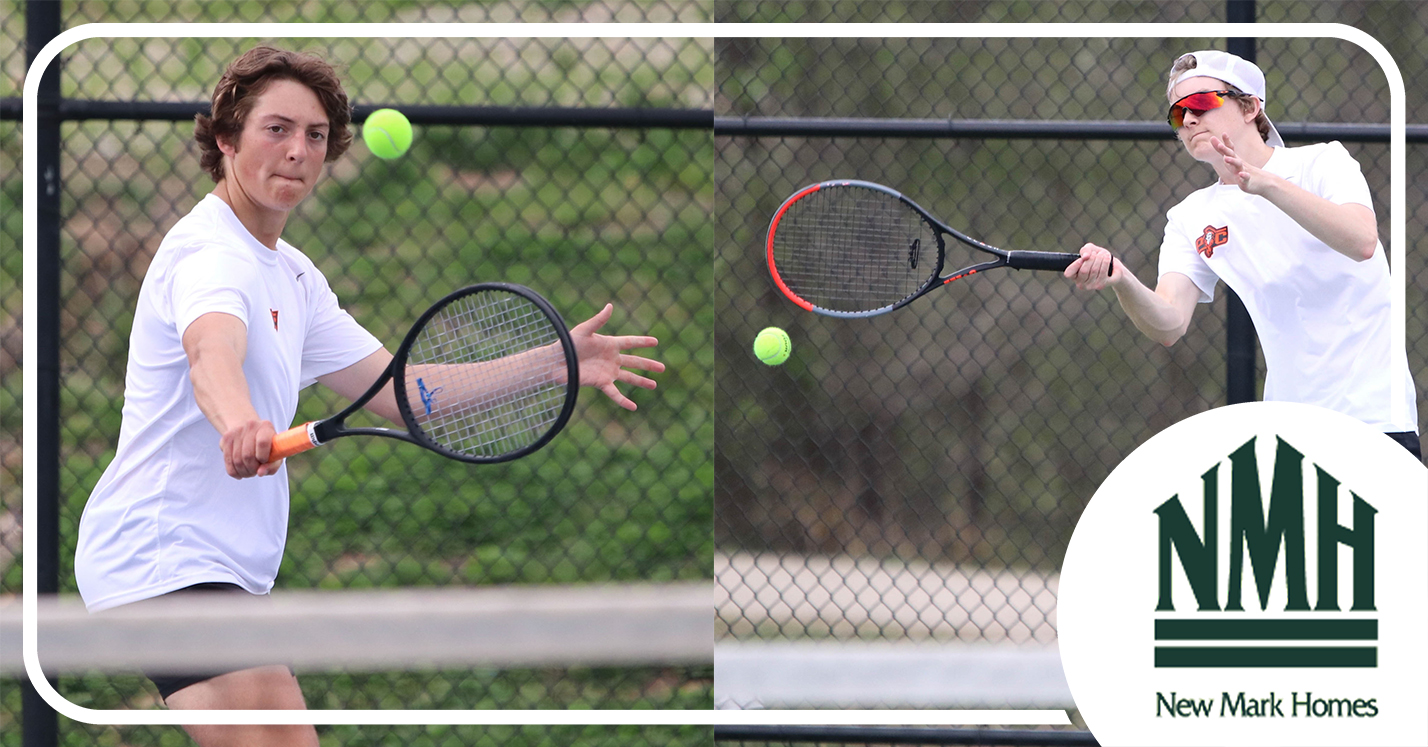 With two quick sweeps to reach the Class 2 District 8 singles final, Gavin Nichols already set Platte County up for a successful day. Austin and Nathan Vanek only added to the Pirates’ recent run of postseason success.

Platte County’s top doubles tandem survived a quarterfinal test then sprang an upset in the semifinals Friday in Grain Valley to double the representation for the upcoming Class 2 Missouri State Tennis Championships.

Each team entered two singles and two doubles players with both finalists in each bracket automatically advancing to the 16-entrant state field. Nichols, the only singles qualifier in program history, won the singles championship for a second straight year.

Austin Vanek, one of only two seniors in the regular top six this season, and junior Nathan Vanek earned the No. 3 seed in doubles. A dramatic comeback 4-6, 7-6, 10-7 victory over second-seeded William Chrisman seniors Josh Huff and David Keltner pushed the brother tandem into the finals for a runnerup finish and a much-celebrated state qualification moment.

Prior to 2021 when Nichols won the district singles crown, Platte County’s only individual state entrant had been the doubles team of Ethan Savage and Aaron Stout back in 2010 when the Pirates were still in Class 1. Add the Vaneks to the exclusive list.

“In the last 14 years of PC men’s tennis, we’ve had 3 state qualifiers, so to double that number in one day was really exciting and definitely a highlight of my coaching career,” Platte County veteran coach Zach Keith said.

The Vaneks actually needed two different comebacks in the same match to reach the final.

Platte County’s Nos. 3 and 4 players opened with a comfortable two-set sweep of Kearney’s No. 3 team but then faced off with Grain Valley’s No. 2 tandem of Ethan Miller and Ben Drinkwater. The Vaneks prevailed 7-6 (9-7), 7-5 to reach the semifinals but immediately fell behind.

Huff and Keltner took the first set and then led 3-0 in the second, only for the Vaneks to surge back to win in a tiebreaker and set up the decisive third set. William Chrisman’s combo of the team’s top two players led 5-1 but ended up losing in the marathon third set.

Ultimately, Austin Vanek didn’t let a final shot at individual success go by. He opened his junior season as the defacto No. 1 in singles as the top returner coming off of the COVID-canceled 2020 season. He took some lumps and eventually settled into the No. 2 spot behind Nichols and exclusively played No. 3 this season. Nathan Vanek was a first-year varsity contributor.

“We knew going into the tournament that Austin and Nathan had a chance to make it to the finals, but we knew it would require them to win against two really solid teams in order to make it happen,” Keith said. “As a coach, it definitely crossed my mind that a letdown in the semifinals was possible against a really tough Chrisman team.

“On the final point, we hit a really good shot and the Chrisman kid hit the ball long, and it’s been a long time since we’ve had a celebration like that.”

Based on Nichols’ track record, Keith knew how to set up his district entrants.

Nichols took the top seed and backed it up, losing just four games in three matches. After sweeping Winnetonka’s Brendan Henson in the quarterfinals, he swept Grain Valley’s fifth-seeded Micah Seems 6-0, 6-0 to reach the semifinals and punch a repeat trip to state.

In the finals, Nichols dispatched third-seeded Zion Holmes of Winnetonka 6-1, 6-2 to make it back-to-back district crowns and adding first two-time individual state qualifier in Platte County history to a growing list of accomplishments.

“Gavin did exactly what he’s worked so hard to do: he dominated,” Keith said. “He was unquestionably the No. 1 seed and played like it all day. Last year, he had to win two really close, three-set matches to win the district, and this year he put his improvement on display.

“I’m really proud of how Gavin played, but I’m more proud of the way he worked so hard to improve his game in the last 12 months. He earned his success today.”

While Nichols and Austin Vanek had teamed in doubles much of the past two years, Platte County junior Jack Forrest ascended to No. 2 in singles. He also ended up paired with Nichols in the latter half of the season for doubles, and Keith didn’t mess with the new teams, entering Forrest into singles.

Forrest took the sixth seed and lost to Holmes, the eventual state qualifier, in the quarterfinals.

“Jack was really disappointed, but Gavin owes a portion of his success to Jack,” Keith said. “Jack has a big game, and he pushes Gavin in practice every day to get better. Jack has had a lot of success this season, and he’ll continue to be critical to our success as a team. He has a massive amount of potential as a player moving forward.”

Platte County actually went into districts shorthanded with freshman No. 5 Jack Bralley and senior No. 6 Shane Duggan unavailable due to an international robotics competition in Texas. Keith went to senior Nathan Macaluso and junior Mason McBratney as the second doubles entrant, and they lost in the opening round in straight sets.

Keith expects to have his normal lineup intact this week for the team competition.

Platte County (7-6) continues to chase the first playoff trip in program history and enters as the No. 2 seed. The Pirates open play Monday at home against Kansas City East (2-5) and will be an overwhelming favorite to reach the final, having previously dispatched third-seeded William Chrisman (9-4) by an 8-1 score in a recent regular season meeting.

Grain Valley (13-2), the district host, took the No. 1 seed by virtue of a 5-4 win over Platte County that featured multiple matches that went to tiebreakers. Nichols and Forrest actually own an 8-6 win over the Compton brothers from that dual a few weeks back.

“Overall, it’s been a tough spring full of near-misses and tough losses to really strong teams, so Friday was really fun because the guys got a taste of the success that comes from competing hard day in and day out,” Keith said.

The Pirates took an advantage out of doubles and pulled away for a nonconference win Tuesday at Staley High School.

In what ended up the final matches before the postseason due to inclement weather, Platte County prevailed by scores of 9-7 at Nos. 1 and 2 singles with Nichols and Forrest to swing the match. Nichols and Forrest also combined for a tight 8-6 victory at No. 1 doubles, while Austin and Nathan Vanek made it a 2-1 lead for the Pirates with an 8-2 win at No. 2.

Despite a slow start in duals this season, Platte County ended up with a 7-6 record in the regular season. The Pirates were also scheduled to play Park Hill South and Lee’s Summit this past week but both were ultimately canceled due to rainy weather.