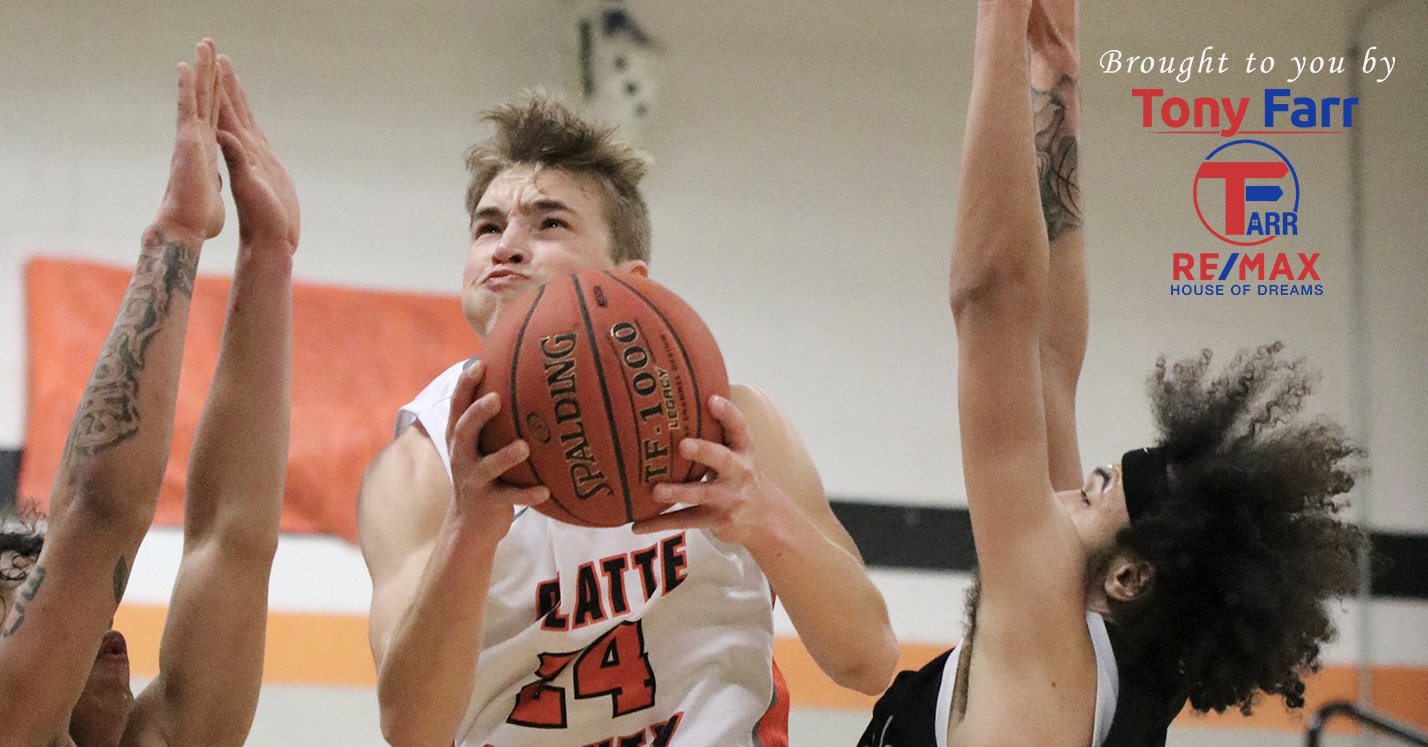 For more than three quarters, Jaden Burnett looked like a player easing his way back from an ankle injury.

Then the Platte County senior guard came up with one of the biggest plays in an entertaining 86-72 win over visiting Lafayette on Thursday at Platte County High School. Burnett converted a three-point play on the way to a quietly impressive 13 points after missing the previous two games with an ankle injury suffered against Winnetonka more than a week earlier.

“Jaden’s an asset to the team. He brings a lot of hustle and energy on defense,” said Platte County junior guard Jace Trimble, who finished with 10 points. “It’s just nice to have him back, get a couple of steals, get runout layups and his extra points are really crucial to what we do as a team.”

Shortly after Burnett’s three-point play, Platte County senior guard Alex McClure rattled in his third 3-pointer of the night to finish with 11 points. Lafayette briefly closed within five points, but McClure’s final basket made it 73-58 with less than three minutes left. The Fighting Irish continued to push the pace late but couldn’t match scoring.

Platte County drilled eight 3-pointers — three apiece for Mueller and McClure and two for Trimble — to continually thwart Lafayette’s attempts at a comeback.

“I would say we like shooting the 3 more than we do going up for two-pointers or pull-up twos,” Trimble said. “This entire team has been playing together for a long time, and we’ve just kind of been like an outside shooting team. That’s kind of like our bread and butter.”

Platte County (16-3) extended its current winning streak to five and all but locked up the No. 1 seed for the Class 5 District 16 tournament, sweeping two meetings with Lafayette. The Pirates won the first in the third-place game of Kearney’s Bulldog Classic last month.

The rematch proved even livelier than the 66-60 outcome almost a month earlier.

Schultz scored four early, and Mueller added his first 3 to stake Platte County to a 9-6 lead. Lafayette then answered with an 8-0 run to take what would end up being the only lead of the game for the Irish.

“After you beat a team once, they come very hungry to get you back again, and that was pretty obvious there in the first quarter,” Schultz said.

McClure received an adventurous shooter’s roll on a 3 with 1:18 left in the first quarter to tie the score at 14-14.

Platte County senior reserve guard Daunte Alaiwat (four points) converted a three-point play off of McClure’s offensive rebound of junior reserve Brody Fulk’s missed free throw. The four-point possession capped a 9-0 run spanning the end of the first quarter and the start of the second quarter to put the Pirates ahead 18-14.

McClure’s hustle showed up again on the final possession of the second quarter. He missed a 3 from the right corner, and after Fulk’s turnaround jumper attempt at a putback clanged off the rim, McClure tipped in that miss at the buzzer to send the Pirates into halftime up 36-29.

“That was a great tip by Alex. That gave us a lot of energy coming into the second half,” Schultz said.

The momentum carried into the second half with Platte County three times building the lead to 12 points — the first time on another 3 from McClure. Mueller hit a 3 to push the advantage to 50-35 midway through the third quarter.

Lafayette managed to pull back within eight, hitting a layup in the final minute to keep from going into the fourth quarter down double digits. The Irish would cut the deficit to 60-54, prompting a timeout from Platte County coach Rick Hodge with 6:47 left in regulation. They then briefly closed within 61-56 but would get no closer.

“I would say we pretty much felt like we were in control most of the game,” Trimble said. “There are always those times where the other team is always going to make a run. That’s just how basketball goes, but it’s just how you react to it, how you stop the run and make your own run.”

Schultz answered with a driving layup, and Mueller added a transition layup to push Platte County back out in front by nine. Shortly after, Burnett came up with his three-point play and McClure essentially added the dagger with his 3.

Trimble scored seven of his 10 points in the fourth quarter, while Burnett had five more. Mueller and Schultz had 10 apiece at halftime, and Mueller put up eight more in the third quarter to help the Pirates initially pull away.

“That happens when you have a lot of scorers on a team,” Schultz said. “When you’ve got five guys on the court that can all score, it’s pretty easy to find open space. When Jarett has 23 and I have 22, that’s because we can open the space up with everybody else around us.”

Platte County moved back up to No. 4 in the most recent Missouri Basketball Coaches Association Class 5 poll, released earlier this week. The Pirates will now hit a pivotal stretch in Suburban Conference Blue Division play, now trailing Ruskin by a half game.

There are three Blue Division games on the schedule this week: at Grandview (8-10 overall and a half game back of Platte County at 6-3) on Tuesday, at Raytown South (6-12, 3-4) on Wednesday and at Ruskin on Friday. With the No. 1 seed for districts not much of a concern, Platte County can ideally shift focus to winning its second-ever Blue Division conference title and first in nearly a decade.