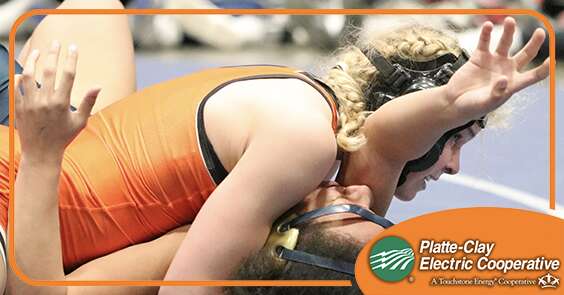 Platte County produces a trio of medalists at KC Stampede

KANSAS CITY, Mo. — The final match of the Kansas City Stampede for Platte County didn’t have the desired result. However, the Pirates turned in another breakthrough performance in the largest tournament on the schedule this season.

Platte County seniors KayLyn Munn (second, 194 pounds) earned a spot in the finals Saturday at Bartle Hall, while seniors Audrey Call (third, 135 pounds) and Elizabeth Humburg (sixth, 125 pounds) battled through the backside to earn their belt buckles, which were given out in place of the traditional medals.

“They’ve worked so hard the last few years that I think they’re starting to see the light at the end of the tunnel,” Platte County coach Reggie Burress said. “Things are going in a positive direction. They work hard at practice and in the weight room, and you can see it out there.”

Platte County opened the season with the largest roster in the program’s four-year history, and the progress for a significant contingent of newcomers showed at Stampede. The Pirates placed 12th as a team out of 31 with 80 points, coming in just 17½ back of fifth place.

In addition to the medalists, Platte County first-year senior Tori Geddes (141) and first-year junior Hannah Mand both came up just one win shy of the medal rounds. Eight of 11 wrestlers won at least one match to score points and contribute to the team total.

Munn continued to lead the way, earning the top seed at 194 but suffering a loss in the championship bout of a tournament for the second straight week.

After finishing as runnerup in the Council Bluffs Classic, Munn dominated her first two matches with pins in 2 minutes, 17 seconds in the quarters and 1:34 in the semifinals. That led to a matchup with Lebanon’s Mariyah Brumley, who fell behind 2-0 after giving up an early takedown on Munn’s well-executed fireman’s carry shot.

The two then exchanged reversals with Munn putting Brumley to her back for the final 30 seconds of the first period. Unable to score the pin, Munn took a 7-2 lead into the second. Brumley started on top and turned Munn to score the pin at 2:45.

Brumley ranked No. 3 in the first Missouri Wrestling rankings at 235 but has since moved down to 194, where Munn ranked first after being a state finalist. Her loss last week came up at 235 with her normal weight class not contested in Council Bluffs.

“I think she knows she can wrestle with the Lebanon girl,” Burress said. “We had her on her back. She’s fighting a little bit of a shoulder problem, and we’re trying to protect that. She got caught up today, and there wasn’t really anywhere for her to go.”

Call also built on her championship from the Council Bluffs Classic to complete the best stretch of her career, which spans just 14 months. She just missed qualifying for Sectional 4 a year ago but suddenly looks like a contender as confidence grows.

Drawing the No. 4 seed at 135, Call pinned her way into the semifinals to guarantee a medal but then lost by fall to eventual champion and top-seeded Bailey Joiner. Call came right back with quick and dominant first period pins utilizing an outside single and big lifts both times to put opponents to their back.

“I think I’m just going stronger mentally, honestly,” Call said. “You get into your mind that you’ve just got to have a positive attitude.”

In her opening match at 125, Humburg sent into overtime tied 2-2 with Fort Osage’s Aroma Marrufo before scoring the winning takedown in sudden victory at the 6:32 mark. Humburg then lost by fall to Kailyn Younger of Paola (Kansas) in the quarterfinals to end up in the consolation bracket.

Humburg then won a 8-3 decision over Park Hill South’s Maddie Fosmoe to stay alive but needed a takedown with 15 seconds left in regulation to beat Seckman’s Madison Conrad in a 7-6 decision. Humburg lost her final two matches but toppled a pair of returning state qualifiers in Missouri during her run.