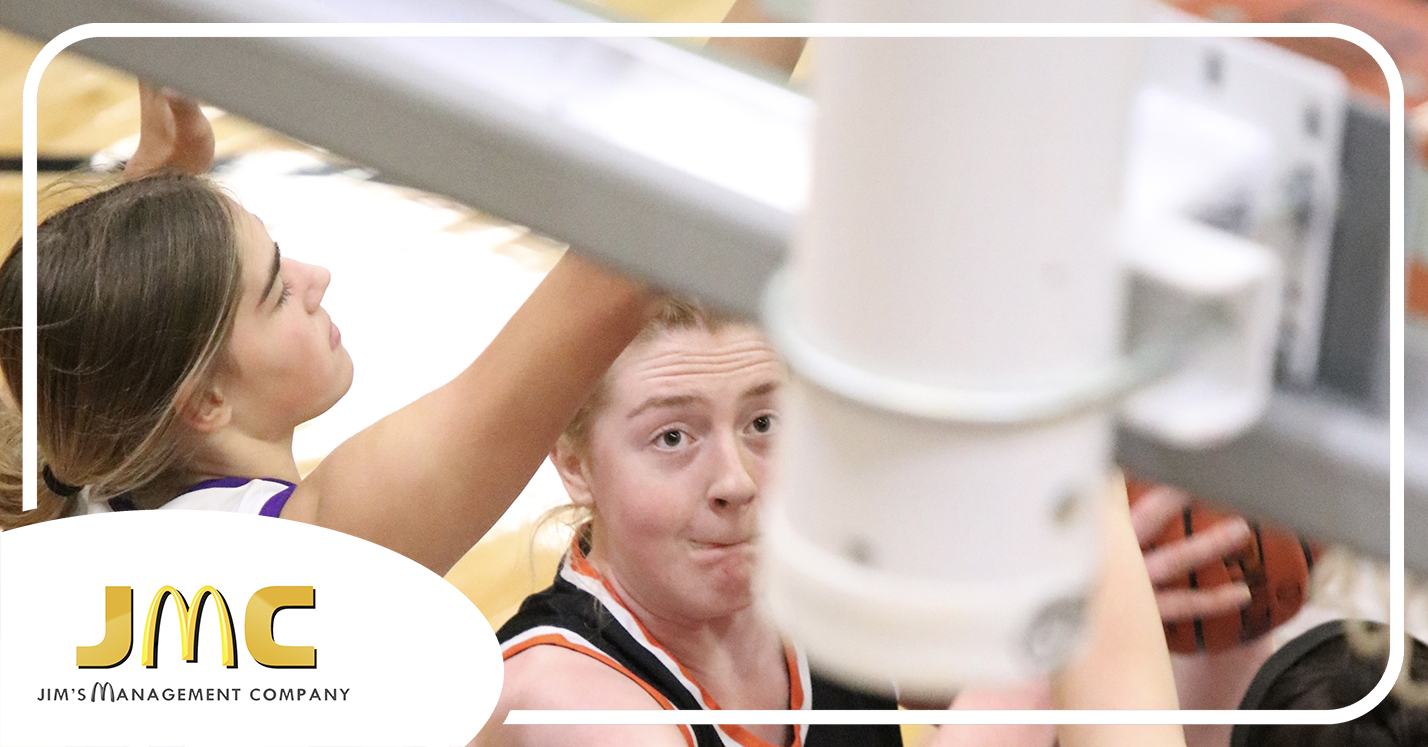 Platte County junior Joslyn Hupp looks to go up for a shot in the first half against Kearney on Thursday at Kearney High School. ROSS MARTIN/PC Preps Extra

KEARNEY, Mo. — Never did an ugly performance look so beautiful in the end.

Platte County and Kearney engaged in a predictably defensive struggle Thursday night in the second of two Suburban Conference Blue Division matchups this season. Both teams struggled to create offense, but ultimately, Platte County pulled away for a 29-17 victory at Kearney High School, coming away with a much-needed boost of confidence and ending and lengthy string of losses to one of its biggest rivals. The Pirates had lost the last 22 straight in the series since sweeping two games in 2010-11, the last four coming over the previous two seasons in similarly frustrating fashion.

Six players shared the limited scoring for Platte County with juniors Joslyn Hupp and Morgan Stewart leading the way with six points apiece, allowing the Pirates to reverse the result of an overtime loss to Kearney in December.

“It feels great,” Platte County senior forward Kiersten Robbins said. “We’ve never beat them, varsity at least, all four years of going here, so beating them was just great. … This was the confidence booster we needed the entire season, especially since it’s such a big rivalry between us.”

Playing without junior guard Maddi Stevens, Kearney (7-10, 5-2) shots just 6-for-49 from the field (12.2 percent) with 26 of the attempts from 3-point range. The Bulldogs went more than 12 1/2 minutes without scoring between late in the second quarter and almost 3 minutes into the fourth quarter. To compound the problems, the Bulldogs went 3-for-10 on free throws, meaning the drought without a field goal went for a full minute longer after a a free throw ended the lengthy scoring drought.

Yet, Platte County (5-10, 3-4) didn’t fully put the game away until Stewart, a guard coming off the bench, hit a pair of 3-pointers in the fourth quarter from essentially the same spot in the left corner.

“We kept the intensity up the whole game,” Robbins said. “Obviously, we were getting tired because we were just on it, on it, on it, the whole time. But I feel like we did pretty good, and we had the most solid game we’ve had this season.”

Stewart’s second 3 put Platte County up 27-15 with just over 3 minutes left in regulation, and despite missing the front end of three straight one-and-one opportunities, the Pirates held on for the win and overcame their own offensive struggles. They shot 10-for-36 overall from the field (27.8 percent) with the attempts evenly split between 2s and 3s.

“I feel like it was an ugly game in the sense that was the fastest game I think we’ve played,” Platte County coach Rebecca Mills said. “I was pleased with our effort. We kept Kearney low-scoring, scored zero points in the third quarter. I think that really gave the girls some momentum in the fourth quarter to finish it out. We had some big 3s knocked down, which we haven’t had all season. Girls were meshing at the same time.”

With Doole back in the starting lineup for freshman Haley Barlow, Platte County jumped to a quick lead on a 3 for Hupp from the left wing. The Pirates were up 6-2 after Robbins’ 3 in the first quarter, while Kearney went the first 6-plus minutes without a field goal. The Bulldogs had a split of free throws on its opening possession and didn’t have a field goal until freshman Ryleigh Van Emmerik hit a 3 with 1:41 on the clock to pull them back within a point.

Kearney hit a pair of two-point field goals early in the second quarter to take a 9-5 lead, and Platte County needed a 3 from Doole and a putback for Peterson to regain the lead at 11-9. The Bulldogs would go in front one more time on sophomore JoJo Kutch’s 3, only for Peterson to respond with her 3-pointer to send the Pirates into the halftime break up 14-12.

The teams both went scoreless over the final minute and a half of the second quarter with Platte County using long, drawn-out possessions against mostly zone defenses that mostly ended in turnovers (14) or contested shots. Neither team led by more than four in the first half.

“We talked about before the game what Kearney is really good at is getting a lot of shots up on their possessions and shooting quickly,” Mills said. “Our goal was to make our possessions a little bit longer and be patient, try to find the best shot possible, so yeah that definitely played into our game. Value our possessions and keep the ball out of their hands as much as possible.”

While Kearney went scoreless for the entire third quarter, Platte County couldn’t fully take advantage. Hupp added her second 3-pointer while junior guard Reese Pickett hit the first of her two second-half baskets to make it 19-12 entering the final 8 minutes. The Bulldogs’ scoring drought continued to linger, and Stewart’s first 3 from the left corner with 5:33 on the clock pushed the advantage to double digits for the first time at 24-12.

Kearney hit a free throw on the next possession and then after a turnover hit the first of two field goals in the fourth quarter. The Bulldogs went 0-for-4 on free throws the rest of the way after pulling within nine, and Stewart added a 3 while Doole finally converted a pair of late free throws after the three one-and-one misses.

“As good as our defense was in the third quarter, our offense was trying to find a flow, trying to find a rhythm,” Mills said. “Toward the end of the game, I told the girls, ‘Anything but 3s,” because with Kearney, that’s their momentum. That’s how they get going.”

Platte County entered having lost four of the previous five in a season filled with absences due to illness and often-rotating lineups. Doole, who missed a significant portion of the first half of the season, returned to the starting lineup vs. Kearney — a spot she occupied much of her freshman season. The Pirates now appear to have the preferred seven-player rotation entering the stretch run where they hope to make a push up the conference standings, starting with a home game against Winnetonka on Monday.

The Pirates went into the Kearney matchup off of a blowout loss Monday at Grandview High School.

Grandview bolted to a 32-17 lead and pulled away from there. Peterson led Platte County with eight points, including a pair of 3s, but went scoreless after halftime. The Pirates scored only eight points in the second quarter total with just three field goals.

In the first half, Grandview hit four of its six 3-pointers.