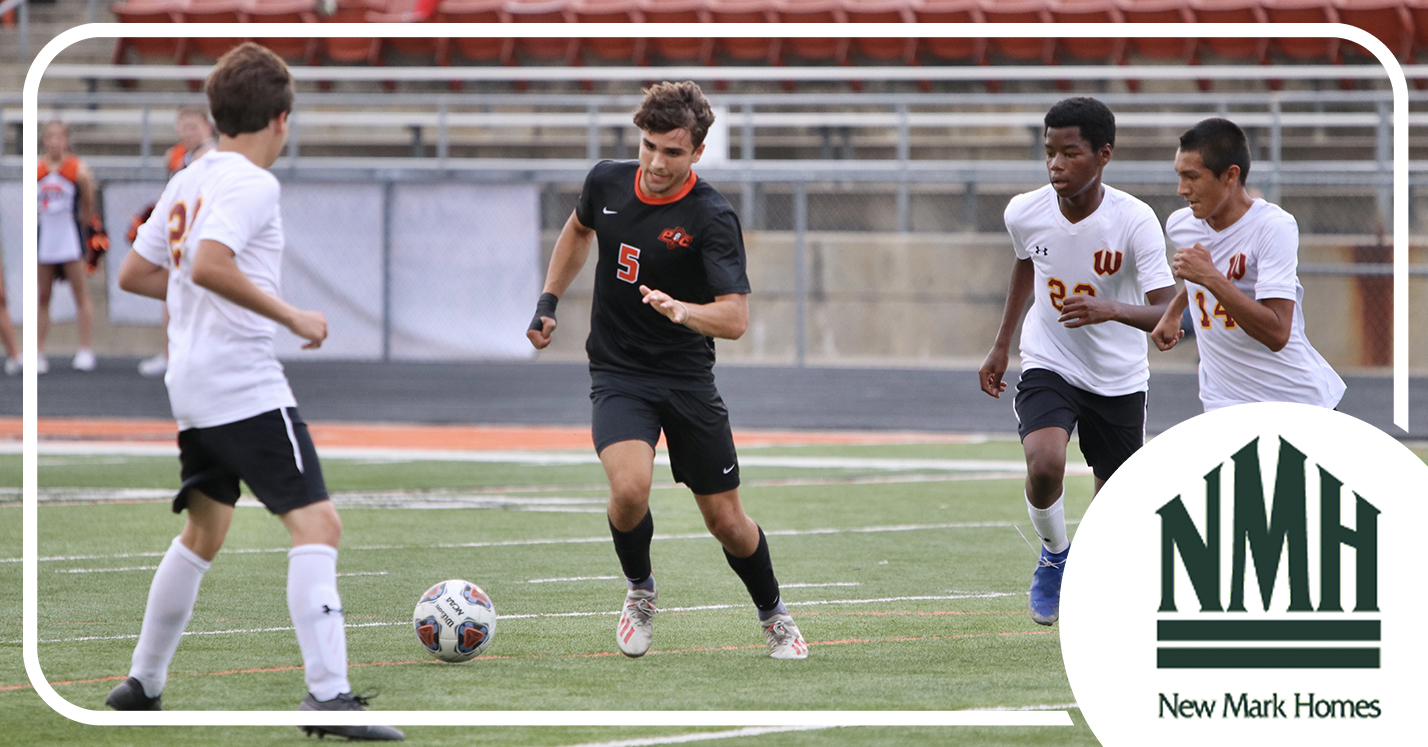 Platte County spent the entirety of the first half peppering the goal with on-target shots from quality chances.

Winnetonka senior goalkeeper Landon Hinkle withstood much of the barrage, but Platte County’s defense continued to give plenty of time for the Pirates’ attackers to find their touch. Gavin Nichols, a sophomore forward struck early to continue his strong start to the season, and junior forward Felix Victore came off the bench to complete a hat trick before halftime in a 4-0 lightning-shortened victory Thursday at Pirate Stadium.

Platte County recorded a 10th shutout in 10 games while improving to 10-0. Pirates senior goalkeeper Patrick Sullivan made just one save, as the scoreless run for the defense ticked up to 685 total minutes to start the season.

“We’re all excited in the back line to see goals go in the back of the net,” Platte County senior defender Sawyer Allen said.

Platte County won three games in three days and enjoyed the opportunity to exit the pitch early, even if under unfortunate circumstances. Victore’s third goal in the 39th minute increased the lead over Winnetonka to 4-0, and the Pirates misplayed a pair of opportunities early in the second half. Additionally, two different players for the Griffins went down with apparent leg injuries in the first 4 minutes after halftime, including Hinkle.

With trainers on the field tending to Hinkle, a close-range lightning strike led to a stoppage of play in the 44th minute. The inclement weather continued to linger in the area, and the coaches agreed to call off the remainder after about 30 minutes in the delay.

Platte County coach Ashlyn Brantley had already started liberally using her subs, knowing the Pirates are set to face Olathe North (Monday) and Park Hill South (Tuesday) in their stiffest tests to this point in the season.

“Coming off of a busy week, yes, we want to get all the time we can to rest and recover, getting ready for next week because it’s always a competitive tournament,” she said. “But I’m happy with what we’ve seen this week — lots of opportunities, lots of possession. That’s how we like to keep the game with a high, quick tempo so preparing us for the games to come.”

Platte County’s new-look 3-5-3 formation, the first of its kind for Brantley in more than a decade leading the program, has been solid to this point with a backline of Allen (left) and fellow seniors Isaac Havemeier (center) and Spencer Hay (right). The Pirates have traditionally employed a 4-4-3 or 4-5-1 but have used veteran midfielders like senior Luke Bunge, senior Calvin Forrester, junior Joseph Ibarra, sophomore Ahoy Victore and junior Nathan Macaluso to provide the necessary support.

Sullivan has been solid in his second season as the main goalkeeper with junior Sam Hernandez also receiving occasional minutes.

The result? Platte County have outscored opponents 51-0 with the state’s new mercy rule limiting games to an eight-goal differential. The Pirates have recorded four 8-0 victories, and the biggest test so far was a 1-0 shutout of Kearney when Forrester delivered the game-winner less than a minute into overtime.

“Formation is based on what we have each year,” Brantley said. “We always have so many midfielders, and this year, what it was is I feel confident with the players we have in the backline that they are able to understand the formation and play in it along with all of those midfielders I know can get back if we need them.”

Platte County also continues to deploy a deep crop of forwards and midfielders, rarely relying on any set combination of players to create offense.

Nichols continues to lead the team in goals and added to his tally in the fifth minute on a pass from Ahoy Victore to make it 1-0. The Pirates wouldn’t need anymore offense, and Hinkle made seven saves in the first half to keep Winnetonka in the game.

“Gavin has always been a hard worker,” Brantley said. “With the time he had last year, he was just growing in that role. Right now, yeah, he’s just continued to grow, and he is finding the goal. He’s able to find the goal when we need it, even in those moments where it’s just bouncing around in there he manages to get a foot, a body, something on it. I guess with him being as big as he is and as tall as he is. We definitely need players like him that are going to be in the right place at the right time.”

First, Platte County junior reserve midfielder AJ Schrick slipped him in behind the defense, and Victore calmly slotted low and right with a right-footed shot to beat Hinkle in the 23rd minute and double the lead. He put the Pirates up 3-0 in the 36th minute when Hinkle awkwardly spilled a shot from senior reserve midfielder Jake Kingery. Felix Victore collected on a tight angle near the left post and roofed the rebound.

Platte County’s final goal came when Felix Victore took a pass outside the 18-yard box and drove to the middle, stopping and hitting a nondescript right-footed shot from 15 yards out that beat Hinkle just before halftime.

“It was good to see Felix actually put some balls in the net,” Allen said. “He was struggling a little bit in a couple of games, but he’s back to normal.”

Platte County’s momentum carried over into the second half.

Connor Currence, a sophomore reserve midfielder, uncorked a long-range effort in the 42nd minute that just missed the left post with Hinkle attentively watching the ball go wide by inches. Kingery and Felix Victore then blasted high on back-to-back chances in front of the net, the second resulting in Hinkle going down with an apparent injury just before the lightning delay started.

“It feels good to get out of here a little bit early knowing we have some tough games next week,” Allen said.

In a recent run of success, Platte County’s offense heavily relied on the high-scoring exploits of Chandler Peterson and then the combo of Chase Peterson and Aaron Cordova, who transferred away after his freshman season in 2019 when the Pirates reached the Class 3 state championship game. The 2020 season featured inconsistent finishing in front of the net, and the Pirates ended up bowing out of the Class 2 District 16 championship game with a loss to Smithville in a somewhat disappointing followup to the state runnerup season.

“We have so many attackers so why not use them?” Brantley said. “This group has matured and gained more confidence in themselves along with being confident in their teammates and letting them take on those roles and realizing they don’t have to do everything themselves. I think that plays a major role in how successful we’ve been and the fact we don’t have to rely on just one player.”

Havemeier scored a pair of goals off of corner kicks, and senior Tyler Bean ended the game in the 62nd minute, hammering home a driven shot from Hay on Wednesday in St. Joseph.

Platte County scored five in the first half, starting with Havemeier hammering home a header off of Macaluso’s corner in the fifth minute. Havemeier’s second goal came on a looping header that found the inside of the right-hand post off of Schrick’s corner kick from the right.

In between, Nichols scored on an unassisted breakaway, Forrester set up Boekhout for one and senior Cody Green assisted Kingery on another.

The goals slowed in the second half, but Ahoy Victore earned an assist on brother Felix Victore’s in the 48th minute, while sophomore reserve Josh Nelson needed one on Schrick’s second assist 6 minutes later to make it 7-0 and set up Bean’s mercy-rule winner with more than 18 minutes still left in the half.

A long throw-in from Allen finally helped the Pirates open up the offense midway through the first half in what became a Blue Division rout Tuesday in Grandview.

Tied 0-0 in the 20th minute, Allen’s long throw-in from the left bounded through the box and unexpectedly ended up on the back post where Boekhout easily headed home for Platte County. Nichols ended up scoring three straight goals out of halftime for a hat trick, while Forrester, Macaluso and Kingery scored one each.

Forrester knocked in a rebound two minutes after Boekhout’s opener, and Platte County took a 3-0 lead into the break after Macaluso also tapped home in the 25th minute. Nichols scored the next three for the Pirates in the 44th, 54th and 62nd minutes with assists from sophomore reserves Nelson and Daniel Bunge.

Platte County had 13 shots on goal total, and Kingery scored the final goal in the 71st minute on a pass from Schrick. The Pirates allowed only one shot on goal, and Hernandez made the save.

Platte County led 4-0 at halftime, but the offense significantly slowed after the first 11 minutes. Ahoy Victore banked a shot in off the Eagles goalkeeper in the third minute, and Nichols doubled the lead less than two minutes later on a pass from Macaluso.

Nichols would finish with two goals and two assists, the first setting up Boekhout’s goal in the 11th minute to make it 3-0.

Platte County would score just once more in the first half with junior Joseph Ibarra striking on a free kick with 6 minutes left before halftime. The Pirates’ only two goals in the second half came in the 54th minute with Nichols setting up Boekhout and 58th with Nichols’ second on a pass from Ahoy Victore.

Ruskin limited the damage despite facing 14 shots on goal total.