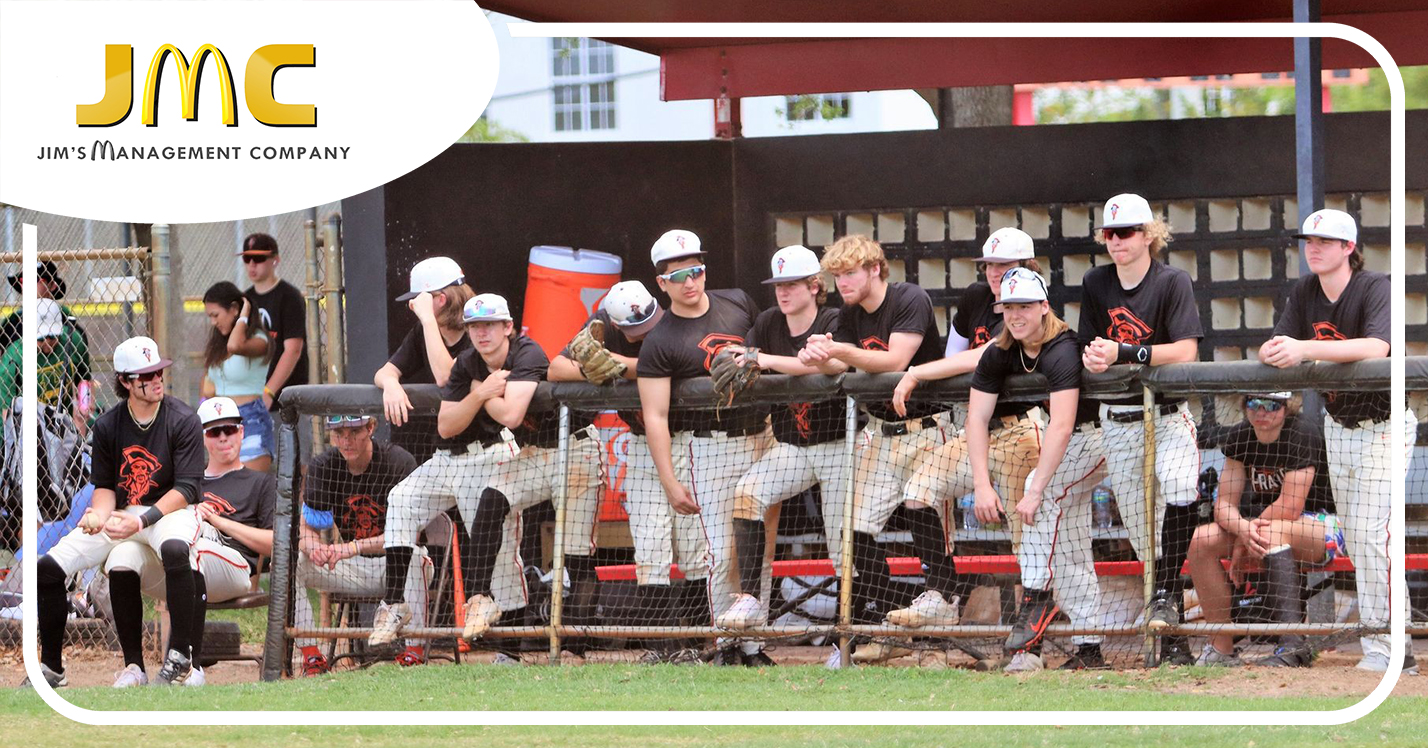 Platte County players stand in the dugout during a game this past weekend in Florida. CONTRIBUTED PHOTO

After starting the season far from home, Platte County’s wait to debut the new home stadium will be extended thanks to inclement weather this week in Missouri. The Pirates won two of five games in a four-day, long weekend trip to sunny Florida.

Platte County was scheduled for a return to action Friday at Platte County High School against Fort Osage, but the game, which would have been the first at a brand new stadium located west of the football field, will now be made up at a later date. The Pirates could now be back on the road until an April 1 doubleheader with Grandview, unless the Fort Osage game is rescheduled before then.

With a 2-3 record, Platte County knows a little bit more about the roster and answered some questions in Florida but also lost senior pitcher/first baseman Sawyer Allen to a jammed ring finger on his throwing hand (left).

In Friday’s opener against Miami Christian, Platte County senior right-hander Landon Fulk — part of a top returning duo with Allen — received the start but allowed six runs on three hits and five walks in just an inning of work. Pirates senior lefty Kole Jenks came out of the bullpen and also walked five but did so in 2 2/3 shutout innings of work.

Miami Christian scored its first six runs in the bottom of the first after initially falling behind 1-0.

Allen doubled with one out in his first at-bat and scored two pitches later on sophomore centerfielder Devin Wassmann’s double to right field. He ended up stranded at at second, and Platte County’s 1-0 lead ended up a 6-1 deficit a half inning later. Allen finished 2-for-3, and senior left fielder Ben Spence added a double to lead off the fifth but also ended up stranded in scoring position.

Miami Christian added two more runs in the sixth against junior reliever Tyler Erickson, who worked the last 2 1/3 innings for Platte County out of the bullpen.

Platte County responded later Friday with 11 hits and eight walks in a 14-4, five-inning run-rule victory over Prairie Grove (Florida). The Pirates plated two in the bottom of the first then five in the third and seven in the fifth for a walkoff win. Prairie Grove had closed within 7-4 with four runs in the top of the fifth, but the Pirates responded with a walk from senior catcher Jake Knudsen and a single from junior second baseman Nick Baker.

On the next pitch, Wassmann launched a grand slam to right field to make it a 12-4 lead for Platte County. Pirates junior reserve first baseman Hunter Canole walked, and junior James Schwieder singled before Fulk tripled to center to score the last two runs and secure the win.

Wassmann went 2-for-3 with six RBIs, capping the five-run third with a run-scoring to go with his RBI groundout in the bottom of the first. Knudsen added two hits, a walk and five RBIs in his three at-bats with a two-out run-scoring single in the bottom of the first and notching his first home run of the season — a grand slam to to left in the third that plated junior first baseman Dylan Robertson, Spence and Schwieder — while Allen went 1-for-1 with two walks for a second straight strong game in the No. 2 spot in the order.

Allen also earned the win on the mound with four shutout innings as the starter, striking out seven and walking two. Platte County junior Ethan Veach hit two batters and allowed three hits in 1/3 innings of work in the fifth before giving way to Norris, who promptly exited the jam with an inning-ending 6-4-3 double play.

In Saturday’s only game, Platte County never led in Pompano Beach (Florida)’s 9-4 victory. The Golden Tornadoes scored their runs on only four hits and five walks, benefitting from four errors. Schwieder took the loss for the Pirates, starting and allowing five runs — only three earned — on four walks and three hits while striking out four in 2 1/3 innings.

After falling behind 1-0 in the first, Platte County briefly tied the score with a run in the top of the third when Allen doubled home senior shortstop and leadoff hitter Cameron Lewis with two outs. Lewis had reached out on a two-out single, and Allen ended up stranded in scoring position.

Pompano Beach immediately answered with five runs, and the Pirates only managed one run in the top of the fourth after Knudsen and Robertson opened the frame with back-to-back singles. Sullivan, courtesy running, scored on on freshman infielder Dayton Doll’s fielder’s choice with junior pinch-runner Dylan Zimmerman wasn’t thrown out in a rundown between second and third until after Sullivan crossed the plate to make it 6-2.

After allowing three more runs in the bottom of the fourth, Platte County added single runs in the fifth and seventh with Lewis scoring on a passed ball and adding an RBI single after junior outfielder Dayne Wimberly opened the inning reaching on a single. Robertson allowed four runs — one earned — in 1 1/3 innings of relief, while Spence came on for two scoreless innings with two strikeouts.

After a day off, Platte County split two more games on Monday to end the trip. Fulk came back from his rough opening outing to pitch 2 2/3 hitless, scoreless innings in a start against Prairie Grove. He struck out three and walked one in a 6-1 victory for the Pirates.

Platte County broke open a scoreless game with five runs in the top of the third, and Prairie Grove managed just two hits with Kyle Box (1 1/3 innings), Zimmerman (two innings) and Veach (one inning) finishing the game on the mound. Zimmerman allowed the only run, while striking out two, and Veach worked around three walks in a scoreless seventh.

Spence paced Platte County’s offense with a two-run home run out of the No. 2 spot in the third, while Canole drove in two after receiving the start at first base. Pirates junior Ryan Vann, who started at second base and played shortstop later in the game, opened the third with a double and scored on an error, while Spence followed with his home run to left to score Doll, who reached after Prairie Grove dropped his fly ball to center field.

Later in the inning, Platte County senior designated hitter Eli Nelson, Knudsen and Canole all singled with two outs. Canole drove in two with his hit to center field to make it 5-0. Canole then scored the final run on junior David Olson’s single to center field in the sixth.

Platte County’s trip finished with a tight 5-4 loss in 10 innings to Wellington (Florida) in the afternoon. The Pirates ended up using four pitchers — Jenks, Norris, Erickson and Spence — with all going at least two innings. Wellington’s winning run in the bottom of the 10th against Spence came with two outs and the bases loaded after a one-out error. That runner scored after a single, walk and single with two outs.

Wellington led 2-0 after the first but fell behind 4-2 after allowing a four-run second that featured three of Platte County’s eight hits and a walk. Pirates junior catcher Cameron Dean led off with a walk, and Spencer reached after being hit by a pitch with one out. Dean scored on Schwieder’s squeeze bunt single, and Baker followed with an RBI single to tie the score 2-2.

Jenks started and allowed the first two runs on three hits and three walks, while striking out two in two innings. Norris followed and struck out two in three innings but ended up tagged with the tying runs.

Wellington opened the bottom of the sixth with a double and single against Norris before Erickson came in with runners on the corners. Platte County’s lead shrank to 4-3 on an RBI groundout and a sacrifice fly tied the scored, but Erickson worked out of a no-out, bases-loaded jam in the seventh to force extra innings.

Wassmann (2-for-4), Lewis (2-for-4) and Doll (1-for-4 with a walk) all had a double, and Platte County stranded two in scoring position in the top of the eighth and lost Schwieder to a double play to end the ninth after a one-out walk. Doll led off the 10th with a double, but the Pirates were again unable to score a go-ahead run.