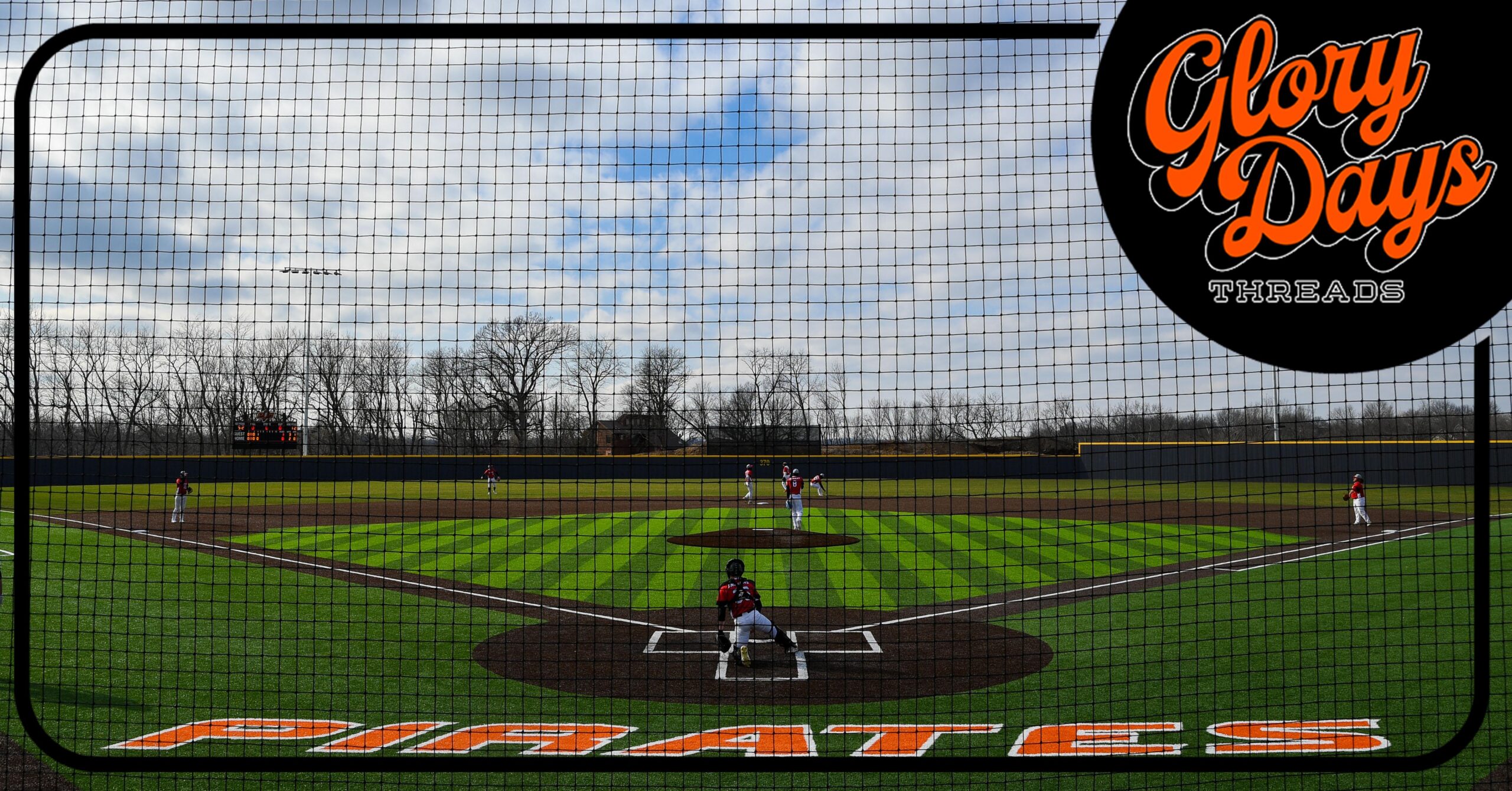 The conditions did not end up optimal, the backdrop not as picturesque and the save situation uncomfortable.

In the first game every played at a new state-of-the-art home baseball field, Platte County faced cold, windy weather and a stern challenge from visiting Fort Osage. The Pirates eventually avoided a bad first memory, holding on for a dramatic 3-2 victory.

Platte County junior Tyler Erickson retired the only two batters he faced in the top of the seventh inning, allowing an inherited runner to score on a sacrifice fly and then inducing a game-ending fielder’s choice ground out. He helped the Pirates avoid extra innings, working around two hits and an error that put a comeback effort in jeopardy.

Fort Osage ultimately had the potential tying run forced out at third in the final at-bat with the go-ahead runner at first.

“I really just love big, pressure situations. I seem to do better when the game’s on the line,” Erickson said of the save.

Platte County (5-4) made the most of three hard-earned runs on a memorable but unseasonably cold and blustery afternoon.

With many players wearing extra layers and face coverings to keep warm, offense didn’t come easy and fielding mistakes piled up. The two teams combined for just 10 hits — none for extra bases — while committing four errors.

Fort Osage took a 1-0 lead after chasing Platte County senior starter Landon Fulk, who didn’t allow a hit or walk while striking out five in 3 1/3 innings. He did hit the first batter of the first game in the new stadium to account for the only runner he allowed.

Platte County senior Kole Jenks came on in relief in the fourth and struck out the first batter before allowing three straight singles resulting in the game’s first run. The Pirates had missed multiple chances to take the lead — loading the bases on three straight walks with one out in the first, a double play erasing a two-on, none-out scenario in the second and stranding sophomore centerfielder Devin Wassmann and senior catcher Jake Knudsen in scoring position in the third.

“We let them hang in that game too long,” Platte County coach John Sipes said.

Platte County managed only four hits, including singles for Fulk and Wassmann in the first three innings. The Pirates managed their first two runs in the bottom of the fifth with only one hit in the frame.

After senior shortstop Cameron Lewis reached on an error, Wassmann walked for Platte County. They moved up a base into scoring position, and junior catcher Cameron Dean drove in Lewis with a sacrifice fly to left. Pirates junior James Schwieder, pinch-hitting for senior designated hitter Eli Nelson, followed with a single, and Wassmann scored on a wild pitch during junior third baseman Nick Baker’s at-bat, which concluded with an inning-ending strikeout.

Platte County went up 3-1 in the bottom of the sixth with a run that ended up being important. Dylan Zimmerman, a junior right fielder, walked to lead off the inning and moved to third on a stolen base and dropped third strike that resulted int he second out. Lewis then came up with a two-out RBI single left fielder with Zimmerman beating the throw home.

“We knew it was going to be that kind of game,” Sipes said. “That’s what good teams do. They’ll find a way to win and score runs. I think we just found a way to claw, bite and scratch and pulled one out.”

Fort Osage’s offense then came back to life.

Platte County senior Ben Spence came on in relief of Jenks to start the fifth and worked two straight scoreless innings before giving up back-to-back singles to start the seventh. After a strikeout, the Indians loaded the bases on an error.

Sipes went to Erickson, who needed two pitches to record the sacrifice fly that cut Platte County’s lead to 3-2. He then induced the fielder’s choice groundball to third base on a 1-2 count to secure the win for the Pirates.

Erickson had struggled in a relief performance two days earlier against Park Hill South, but Sipes didn’t hesitate to go back to the right-hander knowing the need to develop his bullpen at this point in the season.

“With Tyler, he just has a mentality for that situation. He doesn’t care,” Sipes said. “It doesn’t matter if the bases are loaded, no one on, no outs — nothing. He’s just not scared of any situation. We knew that as long as he can keep the ball down he gives us one of our best opportunities to get a ground ball and get out of a big inning.”

The Pirates closed the week Friday with a doubleheader sweep in their Suburban Conference Blue Division opener back at their home field. They improved to 3-0 in the new home facility, batting in just four and 1/3 innings to produce the 36 runs.

In the opener, Lewis’ two-run double in the bottom of the third scored Nelson and junior Dayne Wimberly for the walkoff win. Both walked to open the inning and the Pirates up 13-0. They scored 11 in the first and two in each of the next two innings, including the four-batter third.

In the bottom of the first, the first three runners reached base before Dean hit a sacrifice fly for the first run and first out. Platte County then ended up plating 10 with two outs, starting with Lewis and Wassmann coming home on passed balls before Baker made it 4-0 coming home on Fulk’s single and a throwing error that allowed the runners to advance.

Two batters later, Wimberly cleared the bases with a three-run home run to right field — the first for Platte County on the new home field. The Pirates followed with doubles for freshman second baseman Dayton Doll, Lewis and Wassmann. Wassmann then scored on Dean’s popup to shortstop that became a single. Fulk collected the final RBI on a bases-loaded walk.

Platte County’s two runs in the second came home on one of three Grandview errors and a fielder’s choice. Lewis finished with three runs and three RBIs, while Dean also drove in three.

Schwieder started and earned the win, walking two and allowing one hit in three innings. He struck out seven.

In the second game, Grandview took a 2-0 lead in the top of the first against junior Aidan Norris, who walked three and struck out four in two innings. Doll came in for the third and worked around a walk in a scoreless inning.

Platte County put up eight in its half of the first, starting with three straight singles for Doll, Lewis and Wassmann then an RBI double for Dean to take the lead at 3-2. Baker added a run-scoring double, and Lewis added another RBI double to cap the inning.

In the second, Platte County scored 14 and sent 20 batters to the plate. The first 14 reached safely as the lead ballooned to 20-2. Baker went 3-for-3 with three runs scored and four RBIs, while Lewis was 2-for-2 with three RBIs before exiting the game.

In addition to pitching, Doll picked up three hits and a walk, scored three times and drove in two more. Allen doubled and scored in the second, as did senior Brett Domann (1-for-3, two RBIs, two runs).

Park Hill South overcame a three different deficits, ultimately taking the lead for good after plating three in the bottom of the sixth off of Norris in relief. Schwieder reached on an error with two outs in the top of the seventh for the Pirates, who couldn’t come up with the tying run.

“We’re so young in our bullpen, even though they’re juniors. They just don’t have the varsity experience yet,” Sipes said. “That’s kind of stuck over from the whole COVID year we lost. We’re just trying to still nail down the back end of our bullpen.”

Platte County committed three errors, and the first allowed Park Hill South to take a 1-0 lead on an unearned run in the bottom of the first on a two-out double against Allen, who started. Baker homered to lead off the top of the third to tie the score, and four walks — the last three with two outs — made it 2-1. Pirates junior Dylan Robertson, playing first base with Allen on the mound, came up with the last one to score Schwieder, who followed the solo home run with the first free pass.

Park Hill South scored two more unearned runs in a three-run third with help from two errors to take the lead back at 4-2.

Baker walked with one out in the fourth, and Schwieder, who reached base four times, scored him with a double. He then came home when Lewis singled to center, and Park Hill South’s Lucas Oitker committed an error. Lewis reached third on the misplay and then came home on another error to put the Pirates in front for the second time at 5-4.

After a two-out, two-run home run for Park Hill South on the first batter Erickson faced in relief of Allen, Platte County had to come back again. Robertson’s double and Knudsen’s single put a pair of runners in scoring position, and Robertson tied the score 6-6 when he came home on Spence’s fielder’s choice groundout to first base. Schwieder then singled home Wimberly, who was courtesy running, to make it 7-6, and Doll came up with a two-out RBI.

With the two-run lead still in place, Norris came on in relief to start the sixth. He gave up a walk and a single then a two-RBI double with two outs that left the score tied. Park Hill South provided the final lead change on a triple that brought Jenks in to record the inning’s final out.