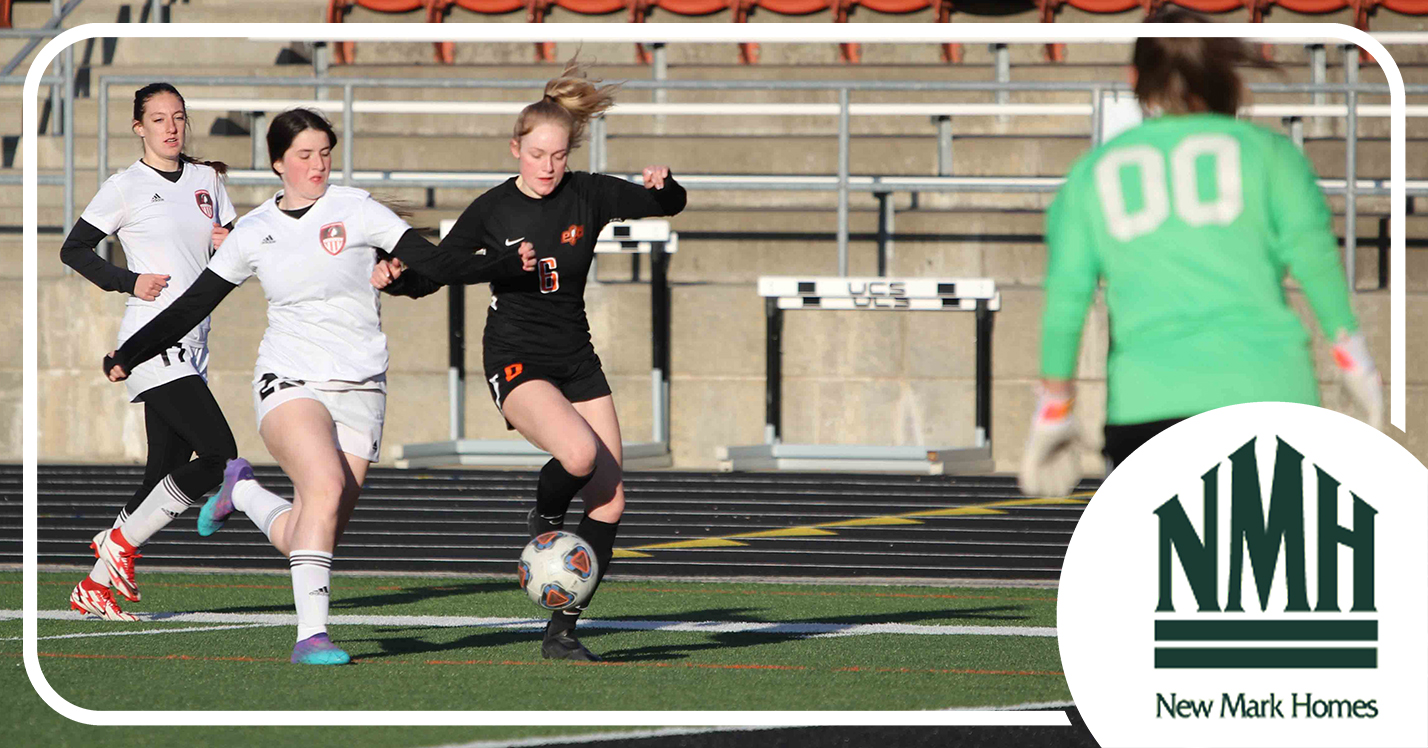 Platte County senior forward Hannah Stone dribbles into the box on her way to drawing a penalty kick against Fort Osage on Friday at Pirate Stadium. ROSS MARTIN/PC Preps Extra

The touches feel fine at this point.

Hannah Stone doesn’t have any trouble identifying the biggest issue in reacclimatizing to game situations. Platte County’s senior all-state forward started and produced an early goal in a 2-0 victory over visiting Fort Osage on Friday at Pirate Stadium, but she still managed only limited minutes in her return from injury. The Pirates continue to inch closer to full strength, and despite a spate of early-season absences have run their current winning streak to seven since the season’s only loss during the opening week of play.

The only real test to pass at this point?

“Oh, I’m out of shape. I’m way out of shape, but I’m happy to be back. Three weeks has been too long,” said Stone, who missed almost the entirety of the first six games and made her return to the starting lineup against the Indians.

Platte County (8-1) started the week with the return of Stone (leg), fellow senior forward Aleah Dixon (leg) and freshman goalkeeper Finley Kaser then added back sophomore midfielder Addison Bradley (ankle) on Thursday night in the second of two straight Suburban Conference Blue Division one-half blowouts. The quartet combined to miss 19 1/2 games with all four being available at the same time only once previously.

Nagging muscle injuries took Stone and Dixon out of the opener, and Kaser went down in the first half of a 1-0 loss to Staley in the second pool play game for the Pirates in the Platte County Invitational. Bradley tweaked her ankle a week earlier and missed two games.

Platte County explored depth out of necessity in the interim, but Stone, Bradley and Kaser have returned to starting spots, while Dixon — a starter much of last year before suffering a season-ending knee injury — slots in off the bench at the moment. The Pirates continued to spread playing time at the forward spot between Stone and freshman starter Lily Kytasaari plus Dixon, sophomore Avery Webster and freshmen Lauren Stone and Rylee Burriss.

With Kaser out, Platte County freshmen Annabel Beeman became the emergency starter, and her return to the field creates additional options in the defensive backline playing behind senior all-state defensive midfielder Paige Chase. The Pirates continue to feature junior Morgan Stewart at left back, while senior Triton Davey and sophomore Alex Beeman have been the first-choice starters at center back. Davey also has received some time at right back behind junior first-teamer Cosette Stephenson with Annabel Beeman getting a chance to relieve her older sister and Davey as needed in the middle.

“It’s not necessarily that I don’t know what to do. It’s just slowly working those girls back in at the same time,” Platte County coach Ashlyn Brantley said, “because I don’t want to have to keep taking them off for a few games here and there throughout the season. So it’s kind of just smartly bringing them back slowly to give them the time they need to get back in that high tempo but at the same time not overdoing it all at once.”

The new rotations were not the cause of the low-scoring matchup against Fort Osage.

Platte County star senior attacking midfielder Riley Smith went without a goal for just the second time this season with Indians senior goalkeeper Kyle Gorbet denying her five different times including one on an early penalty kick. She made nine saves total to keep the Pirates at two goals or free for the fifth time this season — four of those in victories.

Hannah Stone gave Platte County the lead in the 11th minute, and Lauren Stone set up Kytasaari for a tap-in to double the advantage 9 minutes later. The Pirates dominated possession and chances but went scoreless for the final 60 minutes with Kaser recording four saves to help the defense keep a fifth straight clean sheet.

“We’ve been working on creating those attacking chances, which it’s always nice to have those chances,” Brantley said. “We created many of them; now we’ve just got to finish them.”

Fort Osage (2-3) earned a corner kick in the opening moments that came to nothing before Platte County firmly settled into possession resulting in numerous high-quality chances. Hannah Stone burst into the 18-yard box from the left in the sixth minute and forced Indians sophomore defender Kaia Duncan to bring her down from the side resulting in the penalty kick.

Smith went low to the left, only for Gorbet to come up with the stop.

Hannah Stone’s high-energy early shift continued to pay off in the 11th minute when junior Sloan Kassen, a frequent play at forward in 2021 and the early part of the season now slotting in as a starting midfielder, created a chance from nothing. She pressured up on a short goal kick from Gorbet and forced a turnover in a difficult spot for the Indians.

Kassen quickly laid off to Hannah Stone, who drove hard to her right before cutting a shot back against the grain from 20 yards out that rolled into the bottom left corner past a diving Gorbet to put Platte County up 1-0.

“I was so happy,” Hannah Stone said. “I didn’t expect it to go in, but I’m glad it did. I really needed that boost of confidence after being gone for so long. I thought it was gonna go out, but it hit the corner perfectly.”

In the 20th minute, Lauren Stone charged hard down the left sideline before cutting in toward the middle and poking a left-footed cross on the ground to find Kytasaari in stride at the near post. She quickly poked the ball past Gorbet to put Platte County up 2-0.

“It was a great goal,” Hannah Stone said. “They’re making a difference for sure.”

Platte County’s best chances to add to the lead came in the second half.

Fort Osage, which also trapped the Pirates into four different offsides calls on potentially dangerous attacks, cleared the ball off the line on a corner kick, and in the next wave of the same attack, Gorbet cut a cross from the left off of Stewart’s foot. Kassen fired in a shot from a tight angle on the right that Gorbet tipped over the bar, while Smith (twice) and sophomore reserve midfielder Addison Mayne (once) both headed shots over the goal — all before the 56th minute.

Gorbet would stop Smith twice more in dangerous spots, the first on a setup from Kytasaari and the second on a solo run into the middle of the box, while Bradley utilized a nifty cross-field pass from left to right that allowed junior reserve midfielder Mackenzie Shields to fire a shot just wide of the near post from a tantalizing spot in the box.

“It’s tough,” Brantley said. “You can say all you want, as a coach, that you’ve got to have a short memory. You’ve got to get your head up and focus on the next play.”

Platte County enters another busy week with road games at Blue Springs and Ruskin on Monday and Tuesday before hosting Smithville on Thursday in a likely important conference matchup. The two teams split last year’s meetings before the Pirates won the Blue Division title after suffering their loss to Smithville with Smith out injured. The Warriors host Kearney two days earlier with both teams chasing Platte County, already out to a 4-0 mark in conference play with one of those wins over Kearney.

The Pirates completed the season sweep of conference matchups with Winnetonka in a 12-goal, one-half shellacking Monday at Winnetonka High School.

Smith, Hannah Stone, Lauren Stone and Burris all finished with two goals apiece for Platte County, which held a 5-0 lead after less than nine minutes. Shields, Webster, Kytsaari and freshman midfielder Giada Cucchiara added a goal apiece. Only five of the markers featured an assist, including back-to-back helpers on scores for Smith and Shields in the seventh and ninth minutes.

The first goal from Smith came after just 30 seconds on an assist from Lauren Stone, who then scored the next two. She needed just 34 seconds to make it 2-0 on a pass from Smith, while increasing the lead to three in the sixth minute.

After Platte County went up 5-0, the next five goals came from Burris (16th and 28th minutes), Webster (21st minute), Cucchiara (26th minute) and Kytasaari (30th minute). Cucchiara’s goal was the first of her career, and she also assisted on Burris’ second goal of the game.

Hannah Stone, who came off the bench in this one, scored on her only two shots in the 31st and 34th minutes.

Mayne capped the scoring and assured the eight-goal mercy rule would be in play with the Pirates’ ninth and final goal in the 39th minute of Thursday’s conference game in Raytown.

Smith and Burress recorded their second-straight two-goal games, while Webster also added a pair back-to-back in the 24th and 29th minutes to put Platte County up 6-0. Six players factored into the scoring with Lauren Stone, who also started this one in place of Hannah Stone, and Kytasaari also tallying one apiece.

In the fourth minute, Smith scored unassisted to make it 1-0 and then added her second in the 16th minute after Lauren Stone doubled Platte County’s advantage in the 11th minute. Shields, Lauren Stone, Webster, Mayne and Cucchiara all had assists for the Pirates.

Bradley came off the bench for Platte County with the starting midfield consisting of Smith, Kassen, Shields and Chase.