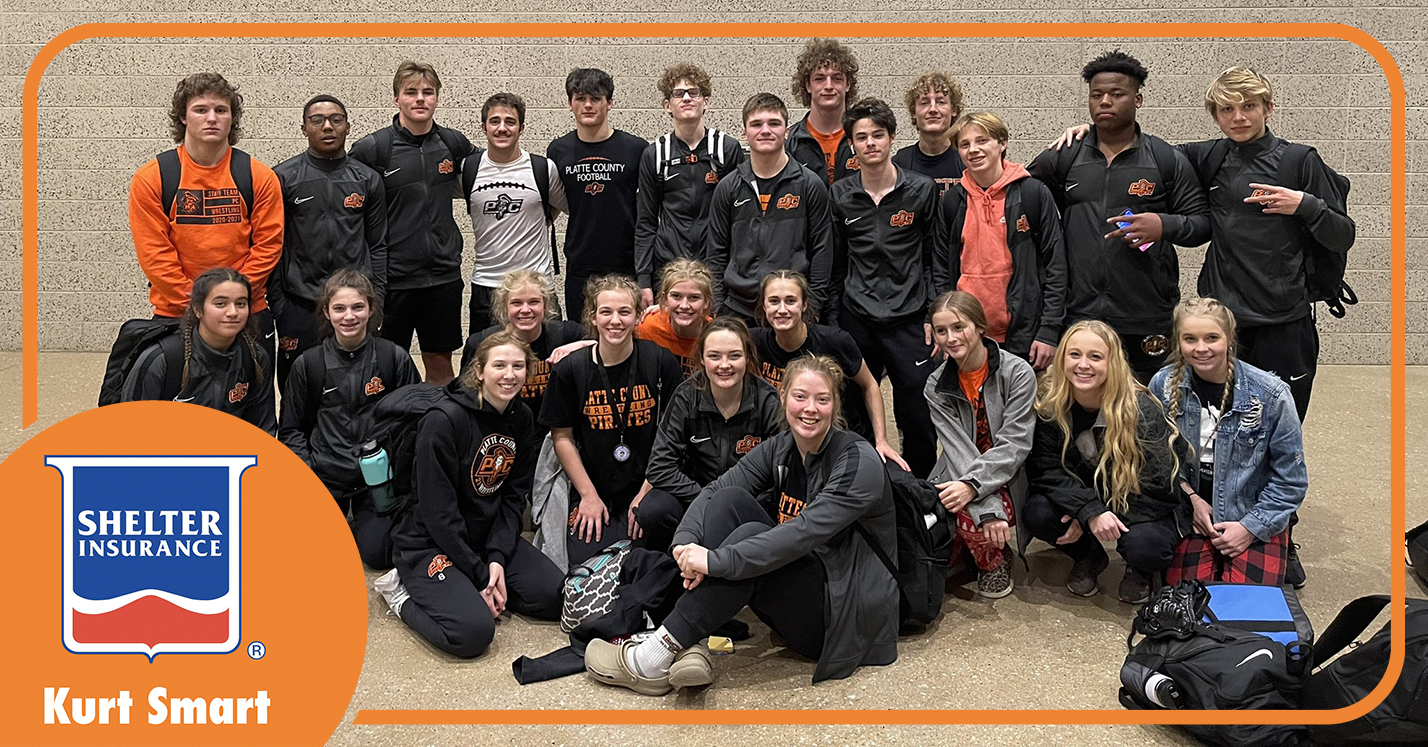 Platte County wrestlers and managers traveled to Iowa for the Council Bluffs Classic this past weekend. CONTRIBUTED PHOTO

Platte County’s potential scoring took a major hit in the middle of the Council Bluffs Classic over the weekend. Not optimal in a 41-team field with top competition from six states competing over two days.

In the end, Platte County finished right near the middle in 21st with 168 points despite losing senior Eli Rocha — the Pirates’ most decorated wrestler — late Friday night. He forfeited out of the remainder of his matches as a precautionary measure.

Platte County produced a trio of medalists with senior Jaydon Walls reaching the semifinals before finishing fourth at 195 pounds. Blaine Keuhn, another senior, placed fifth at 170, while sophomore Jake Fernandez came in sixth at 220.

The top 16 wrestlers coming out of pool competition qualified for the championship bracket, while the rest were placed in a consolation field.

In total, five for Platte County reached the championship bracket, including Rocha after he three matches by fall plus a 6-5 decision over Logan Stotts of Waukee Central (Wisconsin) in 138 pool wrestling. Rocha, a three-time Class 3 Missouri State Wrestling Championships medalist, led his first championship bracket match 9-1 against Garrett Rine of Waverly (Nebraska) when he was knocked unconscious on the mat in the third period, forcing him to injury default.

Rocha would not wrestle again and medically forfeited his final three matches to end up a hard-luck 16th.

Walls, Keuhn and Fernandez gave Platte County a push on the second day, but only one reached the semifinals to guarantee a top-four showing. Walls pinned his way through three pool matches at 220 in a total of just 43 seconds with falls in 10 seconds, 24 seconds and 9 seconds. He then pinned Brek Boruff of Missouri Valley Iowa in 1:12 to start his championship bracket.

The final three matches for Walls would be tight decisions. He held off CJ Carter of Glenwood for a 6-5 decision. Walls led 6-3 in the second period before giving up a late escape, and Carter escaped again 4 seconds into the third period before being unable to come up with a winning takedown.

Walls, a two-time state qualifier and third-place finisher at 195 a year ago, lost 4-2 in sudden victory in the semifinals to Damion Schunke of Brandon Valley (South Dakota), an Arizona State commit. That dropped Walls into the third-place match where lost 4-3 to Sean Carroll of St. Thomas Aquinas (Kansas). The two met a year ago with Walls pinning Carroll in the third period of a back-and-forth match. This time around, Carroll took a 3-2 lead late in the first period on a takedown and added the winning escape early in the third period of a tight match.

Keuhn lost in the 170 quarterfinals to eventual champion Kadin Stutzman of Atlantic-CAM (Iowa) by a 16-0 technical fall. A two-time state qualifier and medalist as a junior after not wrestling his sophomore season, Keuhn ended up finishing the tournament 7-1 five wins by decision, one that went to overtime. He closed with three straight wins starting with a pin of Evan Jalas of LeMars.

Fernandez, a freshman state qualifier at 182, followed a similar path, although he recorded three straight pins in pool before advancing to the 220 quarterfinals with another fall in his first bracket match. That left him facing Brandon Valley’s Owen Warren, who needed just 22 seconds to earn the pin. Warren went on to finish as the runnerup, while Fernandez won his next two by decision to reach the fifth-place match. This included a 7-6 triumph over Christian Nash of Millard South (Nebraska) with a 7-3 lead being cut to one in the final seconds of the third period.

Ayden Hoag of LeMars pinned Fernandez in 3:20 to earn fifth.

Hulett, a returning state qualifier at 106, wrestled in an incredibly tough weight class and ended up winning just one match, a 7-5 decision over Tavean Miller of Kearney (Nebraska) in pool. He went 2-1 with a bye to advance to the championship bracket but lost all four of his final matches to end up 16th.

Parsons was injured in his first consolation wrestle back match and defaulted to 32nd.

Platte County ranked third in the initial Missouri Wrestling Class 3 rankings released this week with Hulett (first, 106), Rocha (second, 138), Walls (second, 195), Keuhn (fourth, 170) and Fernandez (fifth, 220) the individuals in the top six. The Pirates are behind defending champion Whitfield and Hillsboro but one point clear of powerhouse Neosho.

Continuing the toughest part of the schedule, Platte County will return to the KC Stampede, canceled last season due to COVID-19, this weekend at HyVee Arena in Kansas City. The tournament brings in teams from across the nation and is traditionally one of the toughest events in the midwest each year.

Wrestling starts Friday and concludes Saturday, but Rocha and Parsons are not listed in the brackets on Flo Wrestling for the event.

In the opener, Platte County only had one match not end with maximum points scored — an easy 11-5 decision for Keuhn over Kaden Torres at 170. The Pirates started with pins for Hulett (106), sophomore Justin Tiemeyer (113) and Alex Escaping-Fillmer (120). North Kansas City closed within 18-6 with its lone victory at 126.

Platte County then won the final 10 matches, five by forfeit. The run also included pins for junior Bryan Jennings (152), senior Christian Yocklin (182), Fernandez (220) and Brown (285). None of the Pirates’ eight matches that ended with win by pin went out of the first period.

With the win over Grandview, Platte County opened Blue Division competition at 3-0 in defense of last year’s conference title. The Pirates again never trailed after forfeits at 220 and 106 for Fernandez and Hulett.

Grandview did win the first two head-to-head matches to create ties at 6-6 and 12-12, but Platte County against took the final 10 matches, starting seven straight forfeits. The Pirates also had first-period pins for Keuhn and Walls at 170 and 195 with a forfeit for Yocklin at 182 in between.

Yocklin and senior Trevor Scott, who competed in Council Bluffs, continue to split duties at 182 on the season. Rocha and Parsons did not wrestle after suffering the injuries over the weekend.