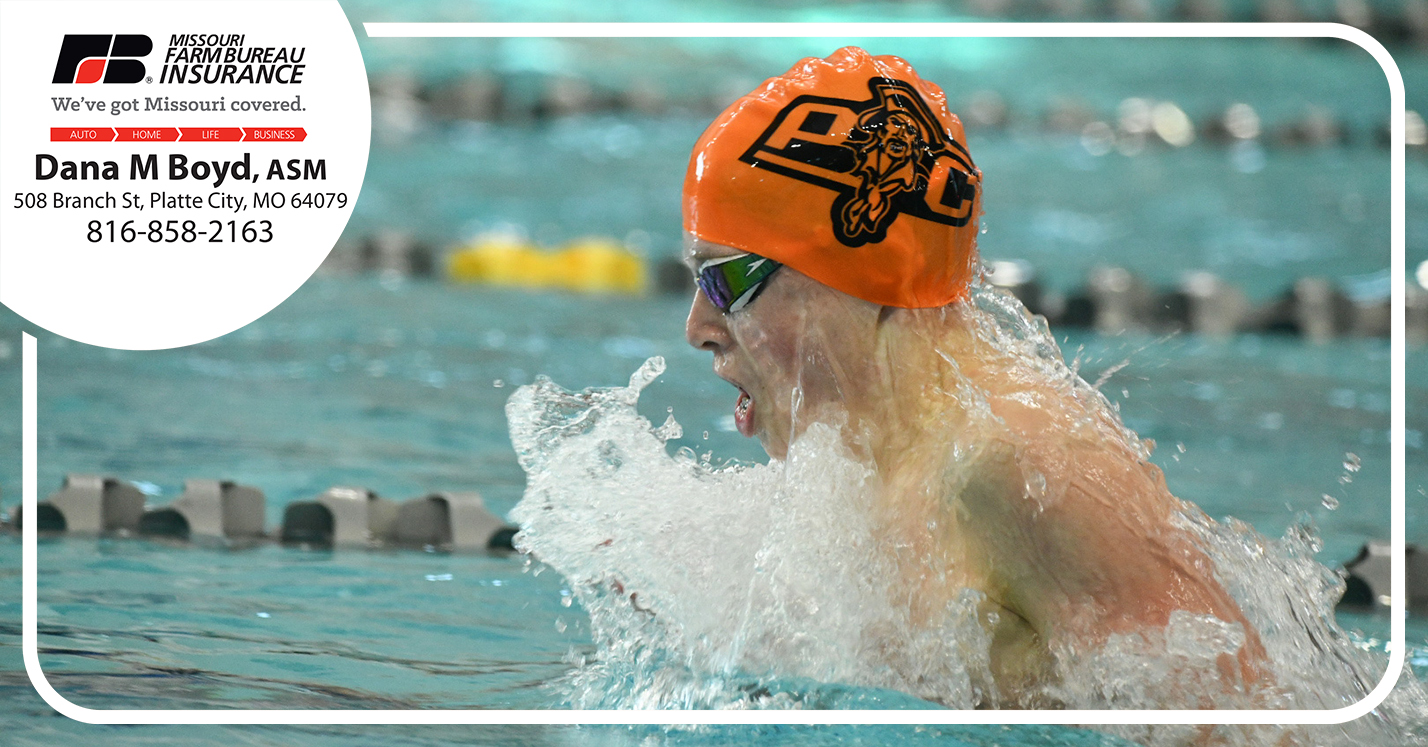 Platte County boasted little experience in the Class 1 Missouri State Swimming and Diving Championships with this year’s qualifying contingent. The talent and teamwork shone bright on the biggest stage in the two-day meet Thursday and Friday at Rec-Plex in St. Peters, providing a memorable finish to the careers of three seniors and showing the promise for the future.

Behind a pair of school-record performances, Platte County rolled up 37 points and placed 17th in the final team standings. Palmer Keith, the Pirates’ ascending freshman, earned all-state honors in the 200-yard individual medley and added a 16th-place finish in the 100 butterfly, while also swimming a leg on two honorable mention all-state relays.

Platte County senior Dylan Bietz swam in four events, including both top-16 relays, and juniors Carson Howe and Collin Burton were also part of the honorable mention 200 and 400 freestyle teams.

For the sixth consecutive year, Platte County boasted at least one top-16 finish, but in 2020, the Pirates had only two points at state — from the 16th-place 400 freestyle relay. Only Bietz and Burton returned from that team, and they were the only two with previous individual event experience.

Starting this year, the state took the top 32 entrants in each swimming event with all qualifiers limited to two individual events and two relays. The top eight in Thursday’s preliminaries advanced to Friday’s championship final while spots 9-16 went to the consolation final. The top 16 in each event score team points, assuming no disqualifications.

Only Keith put up a top-eight preliminary time for Platte County, and he did so in increasingly common impressive fashion for his freshman season.

In the 200 IM, Keith bettered his own school record during preliminaries, posting the sixth-fastest time at 1 minute, 59.57 seconds. The sub-2-minute performance obliterated his previous best of 2:02.54 from two weeks earlier in the Suburban Conference Blue Division Championships prelims.

Entering the season, Nathan Savage held the school record at 2:03.62, and Keith originally broke it at 2:03.50 earlier in the season and then went on to shave nearly 4 full seconds off of that mark. He went on to finish seventh in Friday’s final at 2:00.30 for the first all-state finish of his career.

Keith just missed breaking school record in the 100 butterfly later in Thursday’s preliminaries but still qualified for the consolation final. His 54.84 effort gave him the No. 15 time, and he ended up 16th in the final at 55.38 to score another point for the Pirates.

The school record Keith set at conference remains at 54.46, and he also owns the 200 freestyle program-best time after his first season.

Bietz nearly gave Platte County a second individual qualifier in his final individual race, which ended up being a rare head-to-head swim. Bietz and Borgia junior Gabriel Rio finished with identical prelim times of 22.50 to tie for the 16th and last spot in the finals, and that forced a swim off.

Rio won the race at the end of preliminaries and went on to earn honorable mention all-state honors. Bietz ended up as the first alternate, a spot that wasn’t needed for the finals.

Bietz, who suffered a freak lacerate heel at conference that required stitches, was also 27th in the 100 freestyle preliminaries (50.74). Both of his times were slightly off his career-bests of 22.47 in the 50 and 40.02 in the 100 set in the Blue Division finals, mere hours after receiving treatment for the injury.

However, Bietz finishes his career as a three-time honorable mention all-state finisher in relays.

Platte County’s 400 freestyle team of Bietz, Howe, Burton and Keith set a school record in preliminaries at 3:24.11 with the No. 13 qualifying time. The Pirates then bettered that mark and moved to 12th in the finals at 3:23.82. The previous school record came in 2018 at 3:24.48 from the team of Rhett Spell, Ryan Dye, Joe Ragone and Alex Beall.

The same quartet of Bietz, Howe, Burton and Keith also dropped time between preliminaries and finals to earn a 10th-place finish. Platte County qualified 12th at 1:32.05 and then came in two spots better on the podium at 1:31.69, which also set a season-best. The Pirates qualified all three relays and the 200 medley team of Howe, senior Christian Yocklin, junior Gage Jonkman and freshman Deacon Gutshall put up the No. 26 time in prelims at 1:47.94, just a second off of the season-best time from conference.

With relays scoring twice as many points, the efforts were key to Platte County moving up the team standings. The Pirates have scored at least one point in each of the past five seasons since the state divided into two classes for 2017. The Pirates had a single point in 2016 before the split and just two last year to finish tied for 35th.

“When the guys came together on their relays, they each dug just a little deeper,” Platte County coach Bret Anderson said. “They wanted to do well for each other.”

Yocklin swam on the state medley relay for a second straight season, while making his individual debut, placing 28th in the 100 breaststroke at 1:06.26, after qualifying with a career-best 1:04.81 effort at conference.

Jonkman and Gutshall made their relay and individual debuts for Platte County.

Platte County senior Douglas Wallace and juniors Brody Corbin and Carson Howe were also qualifiers as relay alternates but did not swim. The Pirates will return seven of this year’s 10 state swimmers with a chance to compete for a top-10 spot in 2022 despite the tough task of replacing Bietz and Yocklin’s contributions as competitors and team leaders.