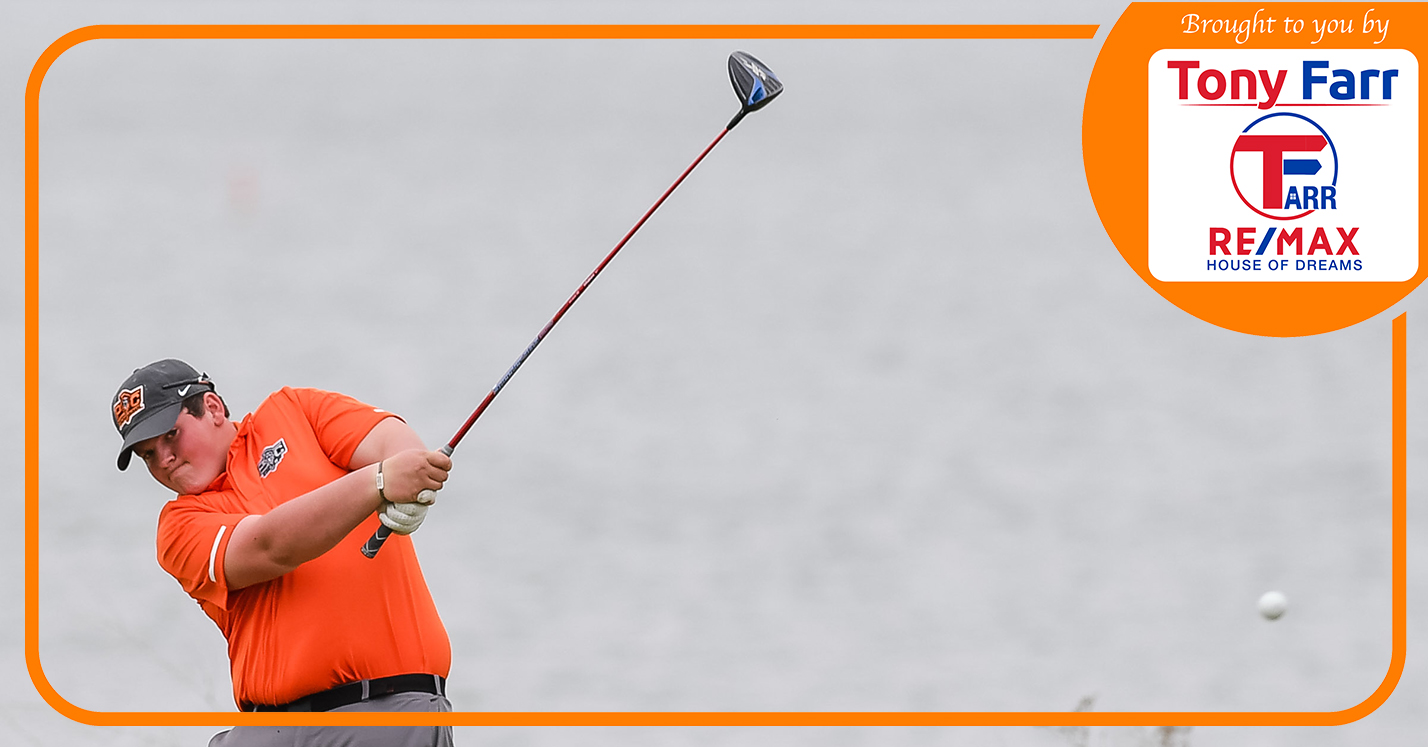 Despite having three golfers in the top seven of the final standings, Platte County finished third in the Suburban Conference Blue Division Championships  on Monday at Shiloh Springs Golf Course.

The contenders at the top were the ones expected to compete for the team title, and Smithville took top honors by eight strokes with a 335. Kearney came in as runnerup at 342, while the Pirates were three shots back with a 345.

“We made a valiant effort on the course today,” Platte County coach Trevor Short said. “Some of us had it going and others did not. We are pleased with the third-place finish, but wish we could have made a better run for the title. We knew Kearney and Smithville shot low pretty consistently so we knew it would be tough. We just didn’t do our best. Hopefully, we are saving it for next week at districts.”

This marked the final competition of the regular season, and Platte County goes into Class 4 District 4 play in a reformatted postseason setup stumbling. Parker Amos, the Pirates’ sophomore No. 1, continues to play steady at the top, and his 8-over 79 at conference placed him third overall, one shot back of runner-up Eric Holmes of Kearney.

Platte County senior Colby Guffey continued his upward trajectory with an 85 to for fifth, while senior Evan Handke came in one shot back in a tie for seventh at 86. The Pirates’ top three finishers earned all-conference honors, while seniors Grant Gomel and Lakin Talley shot matching 95s to tie for 15th and take the final honorable mention all-conference spots.

Entering the postseason, Platte County’s top five looks much different than when it started. Short expected Amos to be a key player, but only Gomel returned from two seasons ago with significant varsity experience.

Eventually, Talley and then Guffey worked their way into the top five after starting the season below the junior varsity level before earning more time with solid play.

While Amos has been the unquestioned No. 1, Gomel, Handke, Talley and Guffey have all taken turns as the No. 2 at different points in the season. The postseason no longer features automatic qualifying teams, so only the top 18 individuals in Class 4 District 4 plus ties will advance to the Class 4 Missouri State Golf Championships.

“Amos should be fine, but the others have been on a roller coaster,” Short said. “One day good and not so good the next. This is the one tournament where you play good or you are done.”

Class 4 District 4 is scheduled for Monday on The Posse Course at Paradise Pointe Golf Complex.

Teams with at least four individual qualifiers will also advance to compete as a team at state. The reason for the new format is the addition of a fifth class for golf, and the elimination of the sectional round.

Platte County remains in Class 4 but is now in the second largest class and not the largest.

“We have had lots of experience on that course this year so we are hoping to have a good showing during the tournament,” Short said.

Teams involved in Class 4 District 4 include Kearney and Smithville, along with Belton, Carl Junction, Fort Osage, Grain Valley, Grandview, Harrisonville, Marshall, Raytown South, Warrensburg, Webb City, William Chrisman, Winnetonka. While most of the teams will be familiar, the field will be unique and potentially very strong.

Marshall took third place at its conference meet, shooting 341, coming in four shots behind Kirksville in a mid-Missouri tournament held in Mexico. Connor McGraw, a senior, led the Owls with a 6-over 78.

Webb City and Carl Junction hail from southwest Missouri and competed in its conference tournament on Monday as well – mostly competing against Class 5 schools. Webb City finished second in the conference race with a 327, two shots better than third-place Carl Junction.

Carl Junction’s Jacob Teeter and Webb City’s Keegan Dill each shot 77 and tied for sixth place at the Central Ozark Conference meet to lead their teams.

“We have a couple of unknowns in Webb City and Carl Junction,” Short said. “With them being so far south, we never see them but they will be coming this way for the district tournament.”

The Pirates finished second during an annual rivalry triangular last Tuesday on The Posse Course at Paradise Pointe Golf Complex.

The competition served as a strong preview of the conference tournament, and Smithville ended up sweeping the team titles.

“It was quite a battle on the course today,” Short said. “We saw some good golf and some less than desirable golf. We knew going into the event that it was going to be tough and that we all had to be at the top of our game on the same day, but it didn’t work out as planned. It was a great opportunity for us to learn some more about the course and that can only help us.

“We need to be more consistent with our scoring and be able to take on any adversities that we encounter on the course.”