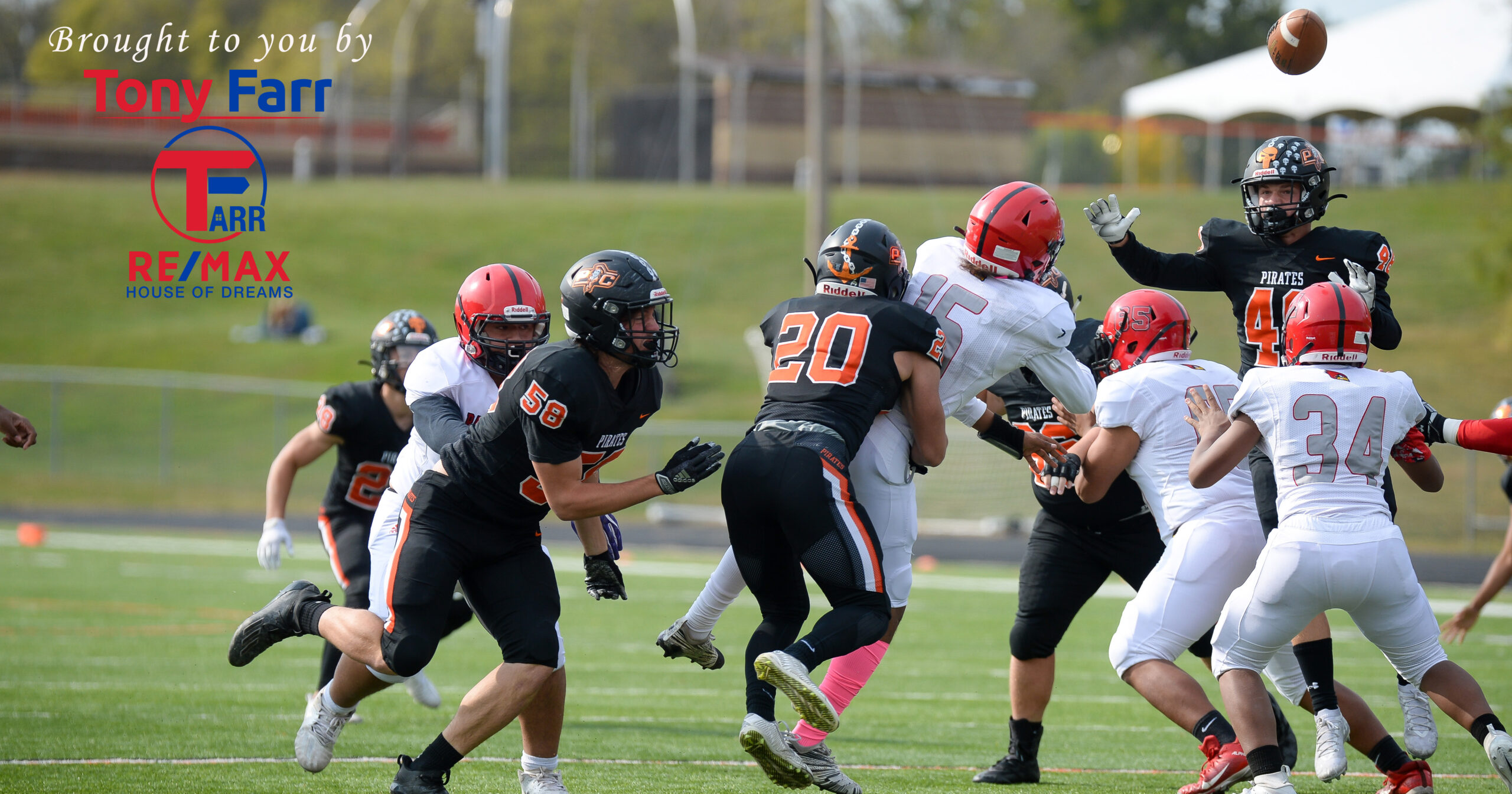 The wind wreaked havoc on all offensive strategy for an unusual Saturday afternoon game at Pirate Stadium.

Raytown South came out of quarantine late in the week, and the road game was pushed back a day to prevent a possible postponement or cancelation. The consistent gusting winds were a problem for an overmatched opponent short on preparation time.

Platte County’s stout defense responded with its first shutout of the season in a lopsided 41-0 victory that featured three safeties and 12 sacks. The Pirates’ three safeties — senior linebacker Tryce Brooks stopping a running back in the end zone, sophomore defensive end Chandavian Bradley’s blocked punt and a sack from junior defensive end Connor Rhoads — unofficially go down as a state record for a single game, according to the Missouri State High School Activities Association.

Raytown South ended up repeatedly buried in its own end against the stiff wind and managed just 5 yards of offense total.

“In a situation like this, the wind really makes it hard on the offensive side,” Platte County coach Bill Utz said, “but for the defensive side, I thought we did a good job using it to our advantage to make sure we pinned them down there where we wanted to. I thought we did a great job by keeping the defense down there, and it’s a situation where I think this wind really helped us.”

Platte County improved to 7-1 overall and finished up an unbeaten 6-0 run through the Suburban Conference Blue Division championship — the first outright title for the Pirates since 2012.

In 2019, an upset loss to Grandview in the regular season finale forced Platte County to share the Blue Division crown for a second straight year, but the Pirates prevented any thoughts of a repeat letdown. Their offensive numbers against Raytown South were also limited due to short fields and a normally high-powered passing game limited to just six attempts.

While not the biggest goal for last year’s Class 4 state runnerup, Platte County still found satisfaction in the outcome.

“It’s one of the three championships you can win in a season, and one that we set our sights on early on,” Utz said. “And we were able to go ahead and get that. It was good to see us in a situation to come out and take care of business the way we needed to in order to make that official.”

Platte County scored on its first four offensive possessions playing with the wind and led 30-0 at halftime before a third quarter touchdown put a running clock into effect for the final 19 minutes, 52 seconds.

Raytown South opened with the ball, and after a three-and-out, the Cardinals’ first punt attempt went backward into the northerly wind. They didn’t cross midfield on any of their first four drives, and the last three ended with failed fourth down attempts deep in their own end.

“Credits to the D-line for (the pass rush),” said Platte County junior linebacker Blaine Keuhn, who had a team-high four tackles (one for loss). “Most games, we have blitz on for linebackers, too, and they’re in there every game keeping pressure on (quarterbacks) while we do our jobs. It all fits together like a puzzle, you know?”

Lavell Whitaker led Raytown South with 15 yards rushing, while Burnett ended up credited with negative-25 due to all of the sacks. Scott added three tackles (two for loss), while junior defensive tackle Connor Harmon and Brooks also had stops behind the line of scrimmage.

Platte County played without junior Jaydon Walls due to a nagging injury but didn’t miss a beat, running mostly three down linemen looks with sophomore Cameron Wolfe providing an extra defensive back in a 3-2-6 look that befuddled the Cardinals.

“I’m proud of the defense, especially how the second string stepped up and really filled in the spots to give us that zero (on the scoreboard),” Keuhn said.

“We talked about it going into the week on Wednesday, Thursday that it might be more windy,” said Ruhnke, who importantly had his first game without an interception this season as he neared 2,000 yards passing for the season. “We knew we were gong to be leaning on the run game a little more. I was hoping I would get at least one, and (the throw) to Dayton was laid out there and it worked.”

Davis finished with a team-high 84 yards on 15 carries, while McDaniel added 43 on 12 carries. The game’s final touchdown came early in the third quarter on junior wide receiver’s second touchdown of the season — both rushing — on a 15-yard jet sweep to start a running clock that remained in effect for the final 19-plus minutes.

Platte County did struggle on longer fields to put together long drives against the wind with passing not much of an option but totaled 176 yards on the ground.

“It’s hard to throw with the wind at your back, too,” Utz said. “You come out and try to do the best you can, but boy, one little gust while you’re throwing it and it goes completely off track. I wish we would’ve run it a bit better in the second quarter. I told them at halftime it’s one of those deals that we have to be able to run the ball when people know we are going to run the ball and still be successful.”

Platte County’s offensive line continued to take a more permanent shape with seniors Trey Butcher (left tackle), Colby Guffey (right tackle) and Jesse Schillinger (center) and junior Joe Nicholson (right guard) in the same spots for a second straight week. The Pirates have been shuffling since the loss of senior center Grant Gomel to a knee injury in Week 4, and the last question mark appears to be left guard. Over the past two weeks, junior Caleb Kelley and senior Dalton Hendricks have split time, and against Raytown South, freshman Muyonta Maxwell made his season debut to provide a third option for that spot.

In each of the past four games, Davis has run for 80-plus yards, including a season-high 158 in a blowout of Ruskin. He’s scored 14 touchdowns on the ground and enters the regular season finale on the best stretch of his season after rushing for more than 1,000 yards as a junior during the run to the state title game.

“(Our offensive linemen) know they’re not the biggest so they know they have to try harder against those bigger defensive lines,” Ruhnke said. “(The hard work) shows what they’re all about.”

When the offense dried up in the second quarter, Platte County’s defense picked up the slack and provided some scoring in unconventional ways.

Stearns and Smith recorded sacks on back-to-back plays late in the second quarter that set up a third and 28 from Raytown South’s 1. Whitaker took a handoff on the play in the end zone, and Brooks — the No. 3 linebacker and first off the bench — continued his propensity for big plays in limited snaps with a solo tackle for the first safety. Brooks also has an interception and fumble recovery this season.

That increased the lead to 30-0, and after Salzman’s rushing touchdown on Platte County’s third offensive play of the second half, Raytown South went three-and-out. Bradley then blocked a punt attempt and nearly scooped it up for a touchdown before tackling a Cardinals player in the end zone for a second safety and a 39-0 lead.

“Any time (Bradley) is in there, there’s no question about it. He’s working hard,” Keuhn said. “He does what he’s asked to do, and it works out.”

Platte County took the ball after the free kick and drove to the 2 before junior third-string running back Parker Hall was ruled down inside the 1 on a fourth-and-goal. After an offside penalty and an incomplete pass, Rhoads dragged Burnett down in the end zone for the third safety. Four teams previously reported to MSHSAA having two safeties in a game, most recently Wright City against Orchard Farm in 2010.

While this marked the first shutout since a Week 6 win over Smithville last year, Platte County’s defense has allowed no more than 20 points in seven of eight games this season. The Pirates have now won four straight since a frustrating 42-37 loss to fellow Class 5 District 8 member North Kansas City in Week 4 that involved allowing two special teams and two defensive touchdowns.

However, Platte County continue to hold the top spot in the seven-team district and now look almost assured to hold that position despite the head-to-head loss.

Lansing started the season 4-0, a run that started with a 26-7 victory over Lincoln Prep — Platte County’s Class 4 District 8 championship game opponent in 2019. The Lions have now lost two of three after a 33-26 defeat against Basehor-Linwood last week.

Platte County and Lansing have played only once before and have not met since 1911 — 109 years ago. Platte County won that matchup 65-5 behind the coaching of A.A. Ross, who of course led the Pirates to their first undefeated season in program history in 1912 (7-0). For those wondering, 19-year-old quarterback Hill Miller, who didn’t attend school past the eighth grade, scored five touchdowns in the game for Platte County, while running backs Edgar Miller (four) and Claude Searcy (three) combined for seven more rushing scores.

Point-after attempts and/or conversion tries were apparently a struggle.

Not to take the intrigue away from the historic rematch, but a Park Hill South win over St. Joseph Central (1-6) would make the result of the Platte County-Lansing game irrelevant to the Class 5 District 8 seeding. The Pirates would then be No. 1 and have a first round bye on Halloween weekend.

Regardless, Platte County has slowly prepared for a new postseason reality quickly on the horizon.

“I think we’re ready, and I think we’ve shown that in the Class 5 games we’ve played so far,” said Ruhnke, who led Platte County to the Class 4 Show-Me Bowl as a junior and now looks to guide the Pirates to the same heights while in Class 5 for the first time in program history. “It’ll be a little different this year, probably having the bye first round, but I think our coaches will do a good job of preparing us for that.”