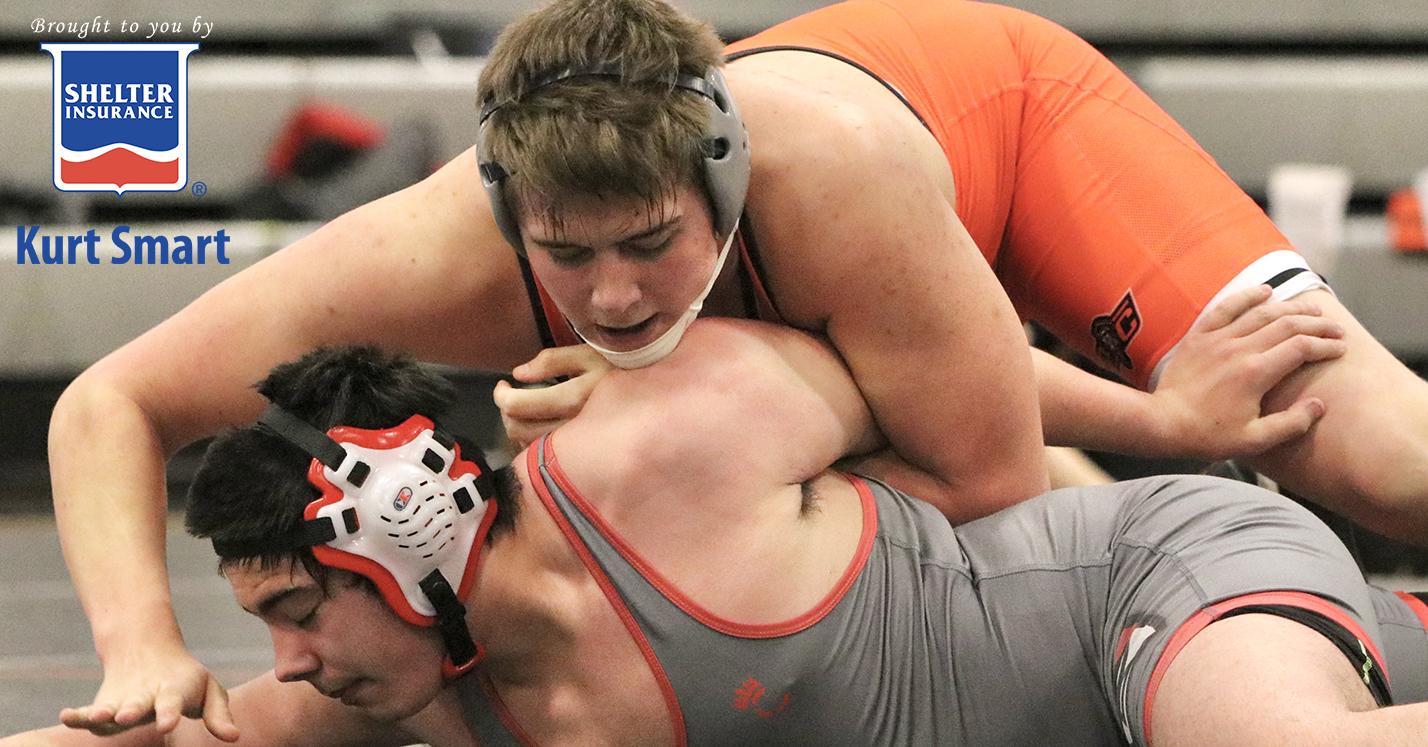 Facing all Kansas competition at a tournament for a second straight weekend, Platte County rolled up 165½ points in a six-team scramble format. The Pirates finished 5½ points clear of runnerup Olathe East, 13½ in front of third-place Mill Valley and 15½ ahead of fourth-place Dodge City in a strong field.

Burge placed second, wrapping up that spot with a pin in 1 minute, 26 seconds of Junction City’s Anthony Petrusky in the fifth and final round of 132-pound matches.

Platte County trailed by 5½ when they took the mat, but the fall plus the placement points pushed the Pirates into first place. Rocha, a two-time returning state medalist, went 5-0 with four pins and a tech fall at 145, while Fernandez continued his stellar debut season with four victories — two by fall and then a pair of 4-2 decisions over Josh Gonzalez of Dodge City and Malique Washington of Olathe East — to wrap up the 182 title.

In addition, Burge and juniors Jared Parsons (138), Blaine Keuhn (170) and Jaydon Walls (195) placed second for Platte County, which has started to see a potentially strengthened lineup take shape. Parsons has cut from 152 to 138, while junior Ben McDaniel is close to making 152 which would allow senior Drake Lacina to potentially reach 160 for a spot in the lineup. Lacina is a two-time state qualifier previously without an opening due to the competition level.

“Those guys are making huge sacrifices,” Keuhn said. “I don’t know if I could do what they do. They’re some tanks for sure for doing that. I’m proud of them for it.”

“I’m just happy with the team we have this year; I think we’re going to do well in our conference, our district and overall,” said Keuhn, who only wrestled against Winnetonka.

Platte County opened against Raytown South, which won three of four matches wrestled but lost 53-16. There were two double forfeits to start, and the Cardinals won at 120 (major decision) and 126 (pin) to take a brief 10-0 lead. The Pirates took the next four by forfeit, and even after a loss by fall at 160, they wouldn’t trail again.

Platte County won two of three matches against Ruskin in a dual rescheduled from earlier in the season. Hulett opened the dual with a pin at 106, and Walls closed the action with a 12-second fall against overmatched Markel Harvey in a 72-6 win.

To close the night, Platte County was nearly flawless against Winnetonka, which had seven opens and gave up six forfeits.

Keuhn came out aggressive against Winnetonka’s Dayton Evans but didn’t come up with the pin. Instead, he picked up eight takedowns on the way to 21-6 with the match briefly being stopped at one point for possible injury when Evans bounced off the mat on a particularly aggressive two-point move.

“Getting back in the groove of things, working on stuff I haven’t worked on before — new things,” said Keuhn, a state qualifier as a freshman who did not wrestle last season.

The trend continued with Walls at 195. He took down Josh Kirk early for a 2-0 lead and added four near-fall points when Kirk attempted to tap out with pressure on his throat. Walls turned Kirk twice ore and pinned him in 1:29. Schillinger made it 71-0 with another first-period pin before the Griffins won the 285 match by fall to avoid the shutout.

Platte County started the night with a special moment having senior Gabe Davis serve as honorary captain. Davis qualified for the Class 3 Missouri State Wrestling Championships as a junior but is out this season while undergoing treatment for a rare form of cancer.