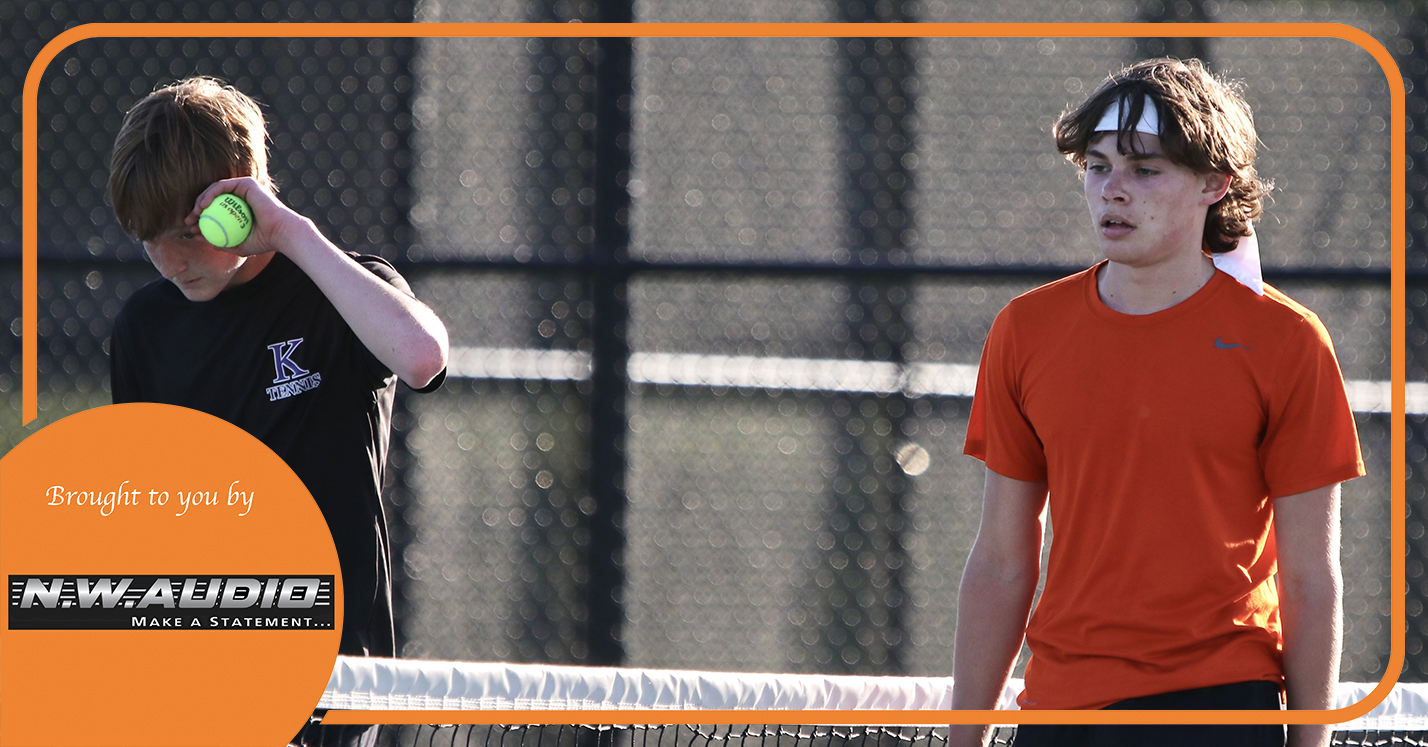 The crescendoing reactions made the crowd’s focus unignorable.

Platte County senior Bradley Beeson and Kearney’s Hayden George took the No. 4 singles match in Thursday’s Class 2 District 8 championship dual three sets, and they were the last ones on the courts at Platte County High School. Beeson nearly fought back from a daunting deficit in the deciding set of the deciding match before George avoided a tiebreaker.

George’s victory gave Kearney a 5-4 win and the team district title. Despite the loss, Platte County made more program history in a unique comeback season but came up agonizingly short of a bigger slice of history.

“It’s one of those that as a coach, you’re very, very proud which would be the best way to describe how I feel,” said Platte County veteran coach Zach Keith, who addressed an emotional group of six players following the match. “That’s the thing that stinks. Whenever you put so much into it, the losing hurts a little bit worse. What I told them is I’d much rather have a loss like that that hurts than to never be in a position to play a match like that.”

Platte County (9-5) entered district play as the No. 1 seed and reached the championship dual for just the second time and first since 2018. The Pirates have never reached the playoffs in the program’s 13-year history.

A new postseason format created a unique potential path, but Platte County brought back zero returners from the team in 2019 — the last season played due to the COVID-19 pandemic.

However, Platte County forged a new identity with junior Austin Vanek, a junior varsity player two years ago, and freshman Gavin Nichols in the top two spots. The Pirates then pieced in seniors like Daunte Alaiwat (No. 3), Beeson (No. 4), Emilio Escamilla (No. 5) and Tony Railsback (No. 6) to form an intriguing but completely unproven and untested lineup.

“I thought we maybe had two matches on the schedule that we would for sure win, and the rest of them?” Keith said. “I thought we might be 2-and-whatever this year, so they far exceeded expectations, but like I said that makes it hurt worse when you go down.”

Kearney survived a tight 5-4 semifinal with Grain Valley just to reach the championship, while Platte County cruised to a second win this season over William Chrisman — this time by a 5-0 score after a 6-3 margin of victory in the first week of the season — on the other half of the bracket.

The rematch between Platte County and Kearney played out just slightly different from the first. Railsback and Beeson again gave the Pirates an early lead with a dominant 8-2 win, keeping them unbeaten in No. 3 doubles play for the season.

However, Kearney won at No. 1 doubles and then took a 9-7 win at No. 2 over Nichols and Escamilla in a reversal of the result earlier in the season.

Platte County went into singles needing to win 4 of 6 matches and immediately turned around the dual.

Beeson had won his opening set against George before dropping the second and falling behind 5-2 in the third. With all of the attention on their match, Beeson won a pair of games to close within 5-4 and inch closer to a potential comeback.

George avoided the collapse and celebrated with teammates as a dejected Beeson walked off the court. The emotions were evident from all six players, who played loose and fun all season but clearly had created expectations and a competitive spirt along the way.

“Brad’s got a lot of really good things going in his life,” Keith said of Beeson being involved in the final match. “He’s really smart; he’s got a good head on his shoulders. He’s going to feel that one for a while, but he’s definitely not somebody that that loss is going to define who he is. In some ways, I was kind of glad it was him because I know he won’t wear it for long.”

The run to the district title dual made it twice in the past three seasons played with the other ending in a tight loss to Park Hill South to end the 2018 season in Class 2 before the state added a third classification for the sport this season. The Pirates remained in Class 2 but avoided being lumped in with the largest schools in the state in the new format.

While the future looks bright with Nichols and Vanek, the four seniors played their final match in heartbreaking circumstances. The wait for the first playoff trip continues, but a collection of complete unknowns banded together and completed one of the best team seasons in program history and showed the resolve that should make the Pirates consistent postseason contenders for years to come.

Nichols won the Class 2 District 8 singles championship with Kearney putting its top players in doubles. His season will continue this weekend in the Class 2 Missouri State Tennis Championships at Cooper Tennis Complex in Springfield in a 16-player bracket, and medals going to the top six.

By reaching the Class 2 District 8 singles final, Nichols became the first singles state qualifier in program history and first individual state entrants since the doubles team of Ethan Savage and Aaron Stout back in 2010 when the Pirates were still in Class 1.