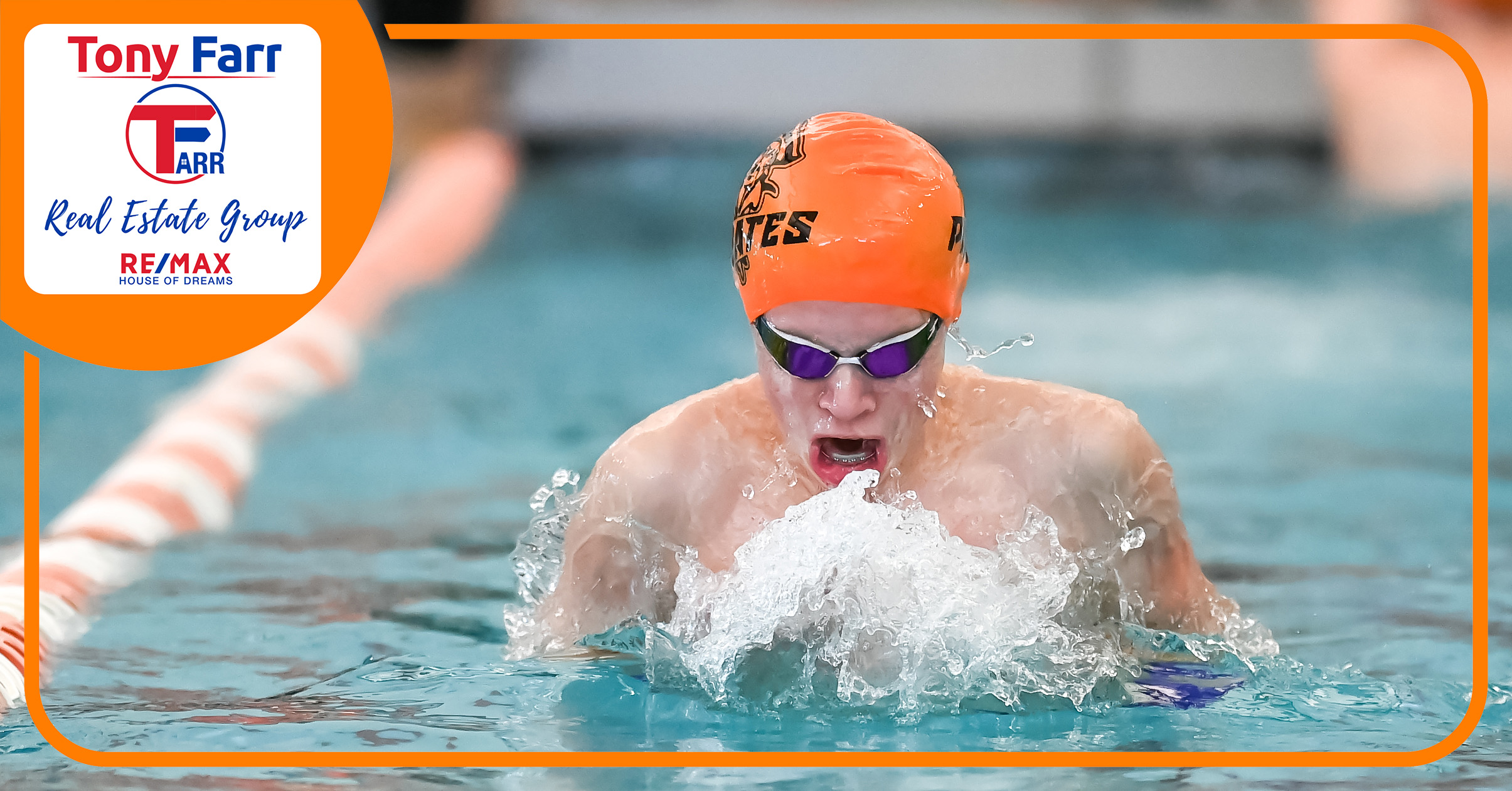 Some of Platte County’s victories Tuesday were short-lived.

The finicky electronic timing system at Platte County Community Center North failed on multiple occasions, forcing fans in the stands into hand-timing duties that have become outdated and archaic. Some late changes cost the Pirates some places and eventually the team title in the final home meet of the season.

Platte County eventually finished second as a team behind St. Joseph Central in the five-team standings by a margin of 521 to 511 on an otherwise memorable celebration of seniors Dylan Bietz, Christian Yocklin, Douglas Wallace, Chandler Skahan and Blake Burnfin.

“It was very emotional, very sad,” Platte County freshman Palmer Keith said. “The season was really fast, and I wish it was a little bit longer.”

Yocklin suffered one of the disappointments. Originally, he heard that he set a personal record in the 100-yard breaststroke — his best event — only to eventually end up third in 1 minute, 8.24 seconds, just a tenth of a second off that mark.

Keith came in second (1:06.87) a lane down from Yocklin, who credited his younger teammate with pushing his time down in the event.

“It meant a lot because I’ve been tapering for it and I’ve been praying for it,” Yocklin said. “I’ve been staying consistent with times so it was nice to see time come off,” he added when still under the impression he had finished in the 1:17s.

Keith also went from first place in a tight 100 freestyle race to third behind Central’s Chase Meyer and Smithville’s Ray Fugett. Keith still set a season-best at 51.10. although the mark apparently does not count due to the timing discrepancies.

Despite that minor setback, Keith heads into the final week of the regular season with the most Class 1 Missouri State Swimming and Diving Championships consideration times, having hit the mark in seven of eight individual events. His standout showing in the 100 freestyle came on the heels of setting school records in the 200 individual medley and 200 freestyle earlier in the season.

Keith admitted he looks forward to seeing his name up on the school record board inside the team’s home facility but otherwise shrugged off the milestones early in what will likely be a decorated career.

“It’s been amazing,” he said. “I really didn’t think (my times) would keep going down. I thought they’d stop at some point, and that’d be it. But it hasn’t yet, and I’m very grateful for that.”

With Keith and Bietz not swimming their best events, Platte County ended up with just one win out of 12 events. The Pirates’ 200 medley team of juniors Gage Jonkman and Collin Burton plus Bietz and Keith came in first at 1:48.99 but was more than 2 seconds off setting a season best.

Burton (59.14, 100 butterfly) and Jonkman (5:29.10, 500 freestyle) also claimed runnerup showings in individual events for Platte County, while the 400 freestyle team of freshman Deacon Gutshall, junior Brody Corbin, junior Carson Howe and Jonkman placed second to close out the meet. Times in general were high for the Pirates in their final competition ahead of this week’s Suburban Conference Blue Division Championships.

Gutshall returned from a few days off due to illness and placed third in the 200 freestyle (2:04.78), while Corbin was just off his career-best time in the 100 backstroke to finish third in 1:10.60.

Platte County loaded its 200 freestyle relay with Bietz, Keith, Burton and Howe. However, the Pirates placed third behind Central and Savannah at 1:37.61 and didn’t challenge for a better state time. The Pirates have continued to mix the lineups looking for the right combinations and enjoying the process.

“I’m learning to never give up, and it’s always a fun to be part of a relay,” Keith said. “Teams I’ve been on, we don’t have relays that often. I’ve always been on pretty small teams so it’s been a wild ride.”

Before the meet, Platte County honored the five seniors, who took the traditional dive into the pool to mark the occasion. The Pirates now shift the focus to reclaiming the conference title for the first time since 2014 with Kearney again the favorite until proven otherwise, having dominated the meet for the past six years.

Platte County continues to look for lower times with only Keith (11th, 200 IM; 20th 200 freestyle; 20th 100 butterfly) and Bietz (18th, 50 freestyle) currently ranked in the top 20 in Class 1. Swimmers can only compete in two individual events at state along with two relays, and the Pirates currently rank in or near medal positions in all three — 13th 400 freestyle, 17th 200 freestyle and 20th 200 medley).

One senior in particular will likely be heard supporting his teammates over the two days in hopes of capturing the Blue Division title.

While Bietz is the top performing senior, Yocklin has become known for his boisterous displays of encouragement for Platte County swimmers. He’s a top contributor on relays with the state consideration time in the 100 breaststroke but never misses a chance to try and provide a lift for the Pirates in their pursuit of team goals.

“I get so invested because I know it helps me when people cheer me on,” Yocklin said. “So if I can do that for the team, then I’d like to do it for everyone on the team.”

Platte County finished third as a team behind Rock Bridge and Rockhurst last Saturday in Sedalia. The Pirates closed the meet with a victory for the 400 freestyle relay, which consisted of Bietz, Jonkman, Howe and Keith.

In addition, Keith scored a first-place showing in the 100 butterfly while coming in third in the 500 freestyle to account for Platte County’s lone individual wins. The Pirates did not have any new low state qualification times on the day.