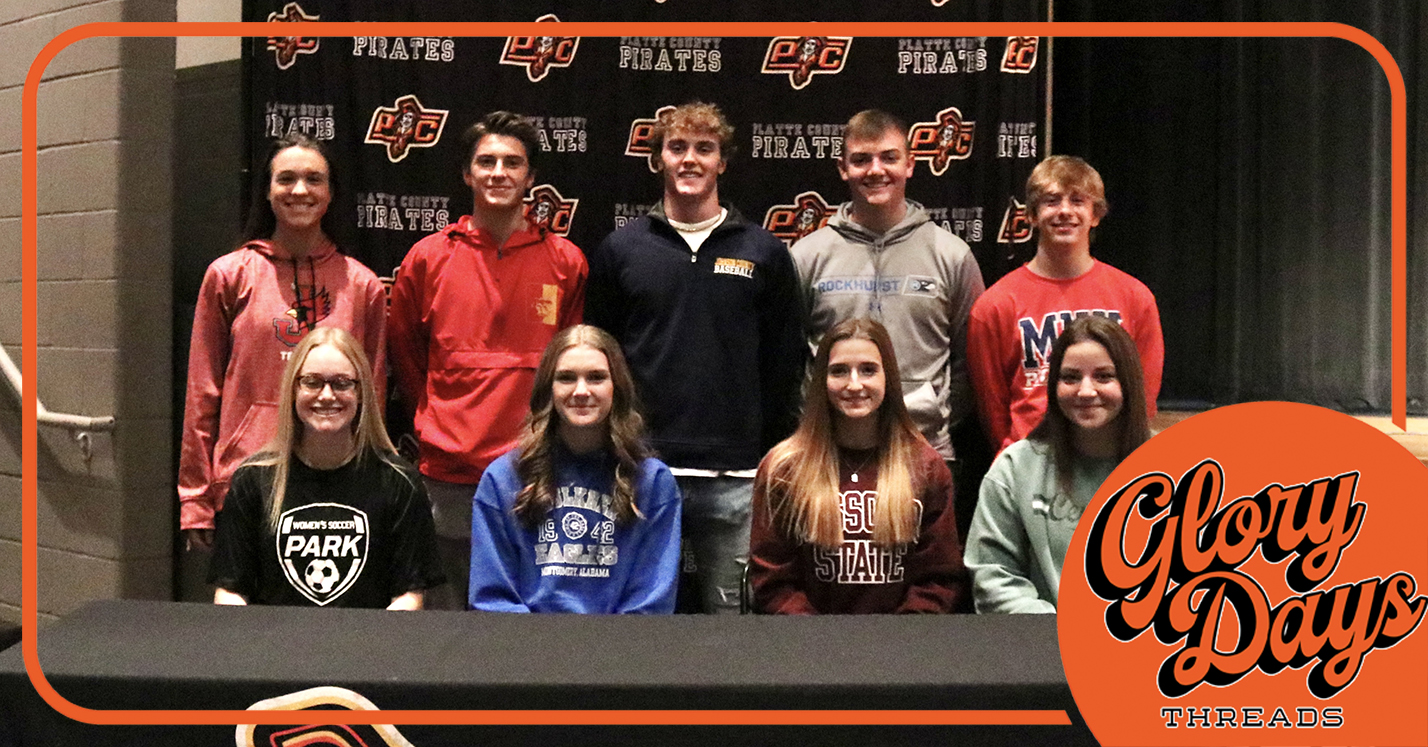 Platte County players and coaches knew all about Riley Smith before she made her debut last spring. The Pirates’ dynamic forward showed exactly what made her a Division I recruit during her junior season, tallying a team-high 38 goals in one of the best season in program history.

“It just felt like home. Ever since I was in eighth grade, I’ve been looking at that school,” said Smith, who concentrated on club soccer as a freshman and might not have played for Platte County as a sophomore when COVID-19 canceled the spring season of athletics. “That school has been close to home so I can come home if I want to but it’s also far enough away so I can have my own life.”

Three baseball teammates with just one season under their belts were honored first.

Platte County had five seniors last spring but only one player with significant varsity experience due to the cancelation of the 2020 season. In an up-then-down season, Platte County went 18-9 overall, bolting to an 11-2 start but going 7-7 down the stretch and bowing out of Class 5 District 8 in the semifinals with a loss to Kearney.

Allen, headed to Division II Rockhurst in Kansas City, earned first-team All-Suburban Conference Blue Division honors as a pitcher. The left-hander threw a team-high 38 1/2 innings in 10 appearances (eight starts) and recorded a 2.19 ERA with a 1.12 WHIP and led Platte County with 54 strikeouts to just 14 walks.

Fulk, a power arm going to Johnson County CC while looking for his next landing spot, stepped into the top starting pitching duo as the right-handed option, making 11 appearances and six starts with a 2.27 ERA and 1.38 WHIP. He struck out 49 but walked 20 in 24 2/3 innings with a strong combination of velocity and breaking balls.

Spence, signed to MidAmerica Nazarene in Olathe, Kansas, spent most of last season at second base but will likely transition to left field this season. He hit .268 with a .475 on-base percentage, tying for the team lead with 19 walks while striking out just 12 times. The right-handed hitter collected 15 hits, including four doubles, and scored 19 runs to go with 16 RBIs.

On the mound, Spence made six relief appearances with 9 1/3 innings pitched. He struck out 12 and walked four.

“Last year was not the season we wanted, but I think we’ll definitely use that as motivation for this season and come back stronger,” Spence said. “I’ve known Landon and Sawyer for basically my whole life so it was pretty special to have them up there with me.”

Gill signed with NAIA Central Methodist after just one season as a starter and helping take Platte County to a second straight Class 4 state third-place finish. The Pirates lost six seniors from the 2020 state qualifier, and Gill replaced Hayden Humes in a key spot — catcher.

Given the full-time job on defense, Gill also earned more opportunities at the plate and responded with a .381 batting average, .506 on-base percentage and .698 slugging percentage. She ended up as many extra-base hits (12) as singles, contributing eight doubles and four home runs to go with 18 RBIs.

Shipp started and finished her golf career as an integral part of some of the best teams in Platte County history. She earned all-conference honors all four years, including back-to-back medalist performances in the Blue Division Championships as a junior and a senior. The Pirates have won six straight Blue Division team titles and qualified for state in Class 3 each of the past two seasons — their first since going in Class 1 back-to-back seasons nearly two decades earlier.

Just off of all-state finishes, Shipp set the program record for lowest state round in 2020 (83) and sits tied with older sister Kasydie Shipp and Amy Silcott for lowest tournament round in Platte County history at 81, a number she hit twice this season at Shiloh Springs Golf Course.

Shipp now takes her golfing talents to Faulkner College, a Christian school in Montgomery, Alabama, with a physician’s school that checked the boxes for what Shipp wanted.

“We just found Faulkner,” Shipp said. “I went and visited and I really loved the campus, loved some of the professors I talked to and the golf coach so it was just the place for me.”

McBratney took a much different and unorthodox journey to the top of Platte County’s tennis lineup. She ranked No. 33 out of 35 players on the roster as a freshman but moved all the way to No. 1 as a junior when she won the Class 2 District 8 singles title to become the first singles qualifier to the Missouri State Tennis Championships in program history.

After going 0-2 at state in 2020, McBratney excelled again as a senior but suffered an upset loss in the district quarterfinals, keeping her from a repeat berth and bringing an unfitting end to a career that changed the expectations for Platte County’s program after the state expanded from two classes to three. However, her journey continues at Division II William Jewell in Liberty.

“If I had to think back to freshman year, I don’t think I would ever picture myself signing for Division II tennis at college. I would have never believed I would get here, but I guess a lot of hard work paid off,” said McBratney, who led Platte County to the Class 2 District 8 semifinals as a junior and then into the final this year where the Pirates lost 5-3 to St. Pius X.

In a similar journey, Early developed into a three-time all-conference runner and key cog for Platte County in back-to-back Class 4 team state berths. He finished as the individual Blue Division conference champion and Class 4 District 4 runnerup as a senior. The Pirates finished eight in Class 4 at state in 2020 and ninth this season despite turning in the fastest collective team performance in program history.

Early’s time of 16 minutes, 8.8 seconds at state earlier this month ranks as No. 2 all-time in program history behind only Nathan Straubel (15:50.06). Perhaps most importantly, Early took over as the No. 1 on the roster and the key leader for the Pirates, inheriting a literal and figurative baton from Blake Bjustrom.

Originally joining the cross country team as a way to meet people at a new school, Early became so important to Platte County’s roster that after an asthma attack forced him out of his only home race this season all of his teammates gave him the medals they earned in an emotional display of respect. He wants to leave behind a legacy of that camaraderie that’s been so important to his development.

“I started my freshman year not really knowing what cross country was at all,” said Early, a Class 4 District 8 champion in the 1,600- and 3,200-meter runs in his junior season of track and a state qualifier in the longer of the two races and the 4×800 relay. “(Platte County coaches Chris Stubbs and Courtland Ingram) took me in and taught me all these lessons, and all these guys from the past have taught me a lot, showed me how to add on the mileage and just put your head down and go with the pain. I just ended up getting better because of them.”

Smith and Stone were Platte County’s top offensive threats in last year’s run to the Class 3 state quarterfinals. The postseason run ended with a 2-0 loss to Grain Valley, but the Pirates went 24-3 overall — the third-most wins in program history for a single season — and captured the first Suburban Conference Blue Division title since 2009.

Projected as a goal-scoring forward at Missouri State in Springfield, Smith tallied at least one goal in all but six games for Platte County last spring and added six assists as an attacking midfielder and. Focal point of the offense. Stone tied for second on team in goals with 10 to go with a team-high 10 assists despite battling a nagging ankle injury that cost her games and playing time throughout the season.

Platte County finished ranked No. 5 in the final Class 3 poll and returns a large portion of the roster ready to chase a state run.

“I’m very excited to get another chance this season,” Smith said. “I think our team is going to go a lot further than we did last year.”