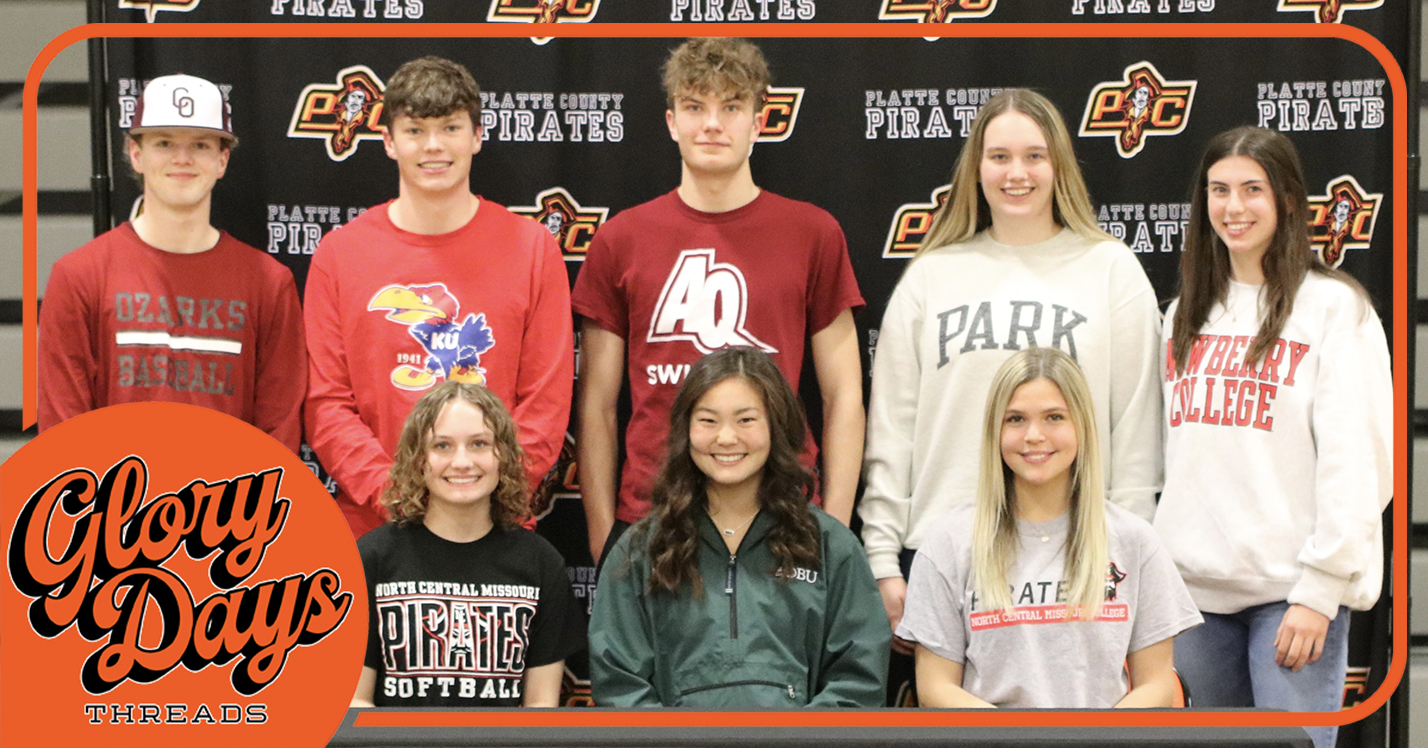 Cole Rhoden knows he has the leg, but the Platte County senior standout wants to keep exploring his opportunity as a wide receiver.

During a signing ceremony Wednesday at Platte County High School, Rhoden celebrated his commitment to the University of Kansas to play football. He kicked and played wide receiver the past two years and added punting duties this past fall as a senior. A broken collarbone limited him to place kicking duties in the final two games of a 9-3 season that ended with a loss to Fort Osage in the Class 5 District 8 championship game.

Rhoden finished the season with 19 catches for 412 yards and four touchdown before injuring his shoulder and effectively his season on offense in a 35-0 win over Winnetonka in Week 7.

“That’s my mentality is to just get on the field as much as I can and really put in the work,” said Rhoden, a two-time All-Suburban Conference Blue Division first team kicker and an all-conference receiver this past season.

Rhoden was the lone Division I signee.

As a junior, Rhoden contributed 12 catches for 164 yards and two touchdowns, the biggest highlight a long touchdown catch in a rout of Kearney early in the year. He then ascended to No. 2 option in his final campaign and opened the year with back-to-back 100-yard performances against Park Hill South and Kearney. He had a 91-yard touchdown catch in the Week 1 loss to Park Hill South and then tied a state record with a 99-yard catch-and-run for a score the following week.

Despite missing five games, he finished second to junior wide receiver Carter Salzman in both catches and yards and tied with him for the team lead in receiving touchdowns.

But Rhoden first grabbed a starting spot as a kicker in his junior season and helped Platte County to back-to-back state championship game appearances in 2019 and 2020 — first in Class 4 and then in Class 5. The Pirates also won back-to-back Suburban Conference Blue Division titles in those seasons, which finished with state runnerup showings.

“I’m thinking I can hit at least 53s, 54s,” said Rhoden, also a Class 4 District 8 runnerup in the long jump and member of the winning 4×200-meter relay as a junior in track and field. “The biggest thing will be staying consistent, kickoffs and field goals. I really would like to see myself ending up at receiver. I see myself having room to grow.”

Sullivan has already won a state title and now comes back for a senior season with a chance to make more history. As a junior, she won the pole vault in the Class 4 Missouri State Track and Field Championships as a second-time qualifier in the event with her sophomore season wiped out by COVID-19. Uniquely, she has held the school record at both Park Hill South and Platte County, having went to state while competing for the Panthers as a freshman and then transferring to Platte County.

Sullivan, who will be at NAIA powerhouse Oklahoma Baptist in Shawnee, Oklahoma, became just the third individual state champion in program history and the first to do so in a field event. She combined with graduated senior Abbie Schweider, now at Northern Iowa, to form a potent duo in the pole vault, and they went 1-2 at state to lead the Pirates to a fourth-place team finish and the first team trophy in that sport ever. They currently share the school record at 11 feet, 6 1/4 inches.

“I’m looking forward to this season, and it’s nice being committed already,” Sullivan said. “My coaches have already talked to me about enjoying my senior year and getting ready for college.”

Brown became just the third two-time selection to the Missouri High School Volleyball Coaches Association all-state team in Platte County history, joining former teammate Bryn McGehe and Division I basketball player Morgan Johnson. Uniquely, due to Missouri’s recent increase to five classes for the sport, she also became the first to make it in Class 5 after making the Class 4 list as a junior.

Finishing Platte County’s all-time leader in kills with 949, Brown led the Pirates to a 24-10 record this past fall, which ended with a heartbreaking five-set loss to Park Hill in the Class 5 District 16 championship match, after they won 28 matches in each of the previous three years.

In 2020, Platte County reached the Class 4 state semifinals in the deepest playoff run in program history, eventually finishing in third place after losing a heartbreaking semifinal but coming back to win the final match. Her total for kills included a career-high 336 this season with a team-best 27.6 hit percentage to go with 60 service aces, 255 digs and 20 blocks.

“I am proud, but I’m just proud to be a part of the program. I’m going to be honest,” said Brown, a four-year contributor and three-year starter. “The individual accomplishments are important to me, but it’s more important that I got to meet the people I got to meet, and I got to be coached by awesome coaches and play for this community and this school.”

Brown will find her way to Newberry College, a private Division II school in Newberry, South Carolina. With in-person recruiting limited, she spent time sending out tape to many schools and by happenstance ended up drawn to the Wolves and the campus a long way from home.

“I wanted to go somewhere new, see something different,” she said. “I just really connected with the coach and the campus was super gorgeous. It just seemed like a good fit, and I guess that’s where I’m going now.”

Headed to Park in Parkville, Robbins is in her second-year as a key starter for Platte County basketball, which enters play this week with an overall record of 8-12. The Pirates are currently 5-5 in conference play and own the No. 4 seed in the upcoming Class 5 District 8 tournament, which starts with a home game against Van Horn next Saturday.

As a junior, Robbins ranked second on the team with 8.6 points and 5.4 rebounds per game in a 10-13 season. She’s currently at 4.6 and 5.1 points per game this season on a balanced offense.

Headed to Aquinas in Grand Rapids, Michigan, Bietz finished his career this past fall as a three-time honorable mention all-state performer in the Class 1 Missouri State Swimming and Diving Championships in addition to a multiple-time qualifier in individual events.

Platte County scored 37 team points and placed 17th in the team standings with Bietz swimming in four events. For the sixth consecutive year, the Pirates came away with at least one top-16 finish, and Bietz nearly joined freshman Palmer Keith in the individual finals. Bietz lost a swimoff for the 16th and final spot in the 50-yard freestyle in addition to being 27th in preliminaries in the 100 freestyle.

A year earlier, Bietz was on the 16th-place 400 freestyle team that earned the only point at state for Platte County.

The two softball signees will be teammates once again at North Central in Trenton, Missouri, although Hearn only played her first two years for Platte County before focusing on club ball opportunities. Helmer was a two-year contributor for the Pirates and helped lead them to back-to-back trips to the Class 4 Missouri State Softball Championships where they finished third in both 2020 and 2021.

Behind ace Emma Koeneke as a junior, Helmer opened her senior season as one of two top options at pitcher for Platte County. She finished with a a 4.82 ERA in 14 appearances, including 12 starts. The Pirates went 21-10 overall in a comeback season after losing a large senior class that included four college signees. They ran off seven straight wins to reach the Class 4 semifinals before losing to eventual state champion Washington.

A year earlier, Platte County shared third placer after COVID-19 protocols limited the title series to only the championship games.

Jenks lost his sophomore season to COVID-19 but debuted last year as part of an almost entirely new team. The Pirates went 18-9 and lost in the semifinals of the Class 5 District 8 tournament.

Headed to College of the Ozark in Point Lookout, Missouri, Jenks made five appearances, including one start, and posted a 2.27 ERA with 10 strikeouts and three walks. The left-hander will be part of a deep staff this season that also includes seniors Landon Fulk, Sawyer Allen and James Schweider.

“I’m looking forward to our team as a whole,” Jenks said. “We’ve got really strong seniors this year. Our pitching staff is going to be real deep. Our hitting’s going to be solid. I think it’s going to b a real good year for us.”