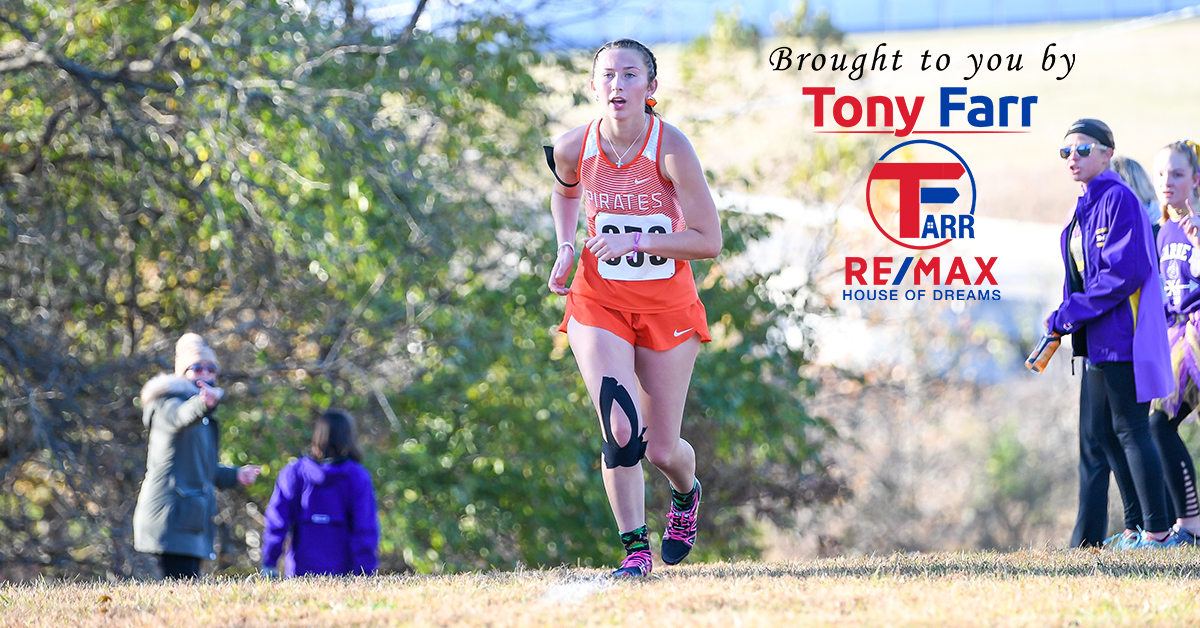 KEARNEY, Mo. — Platte County knew the path to one of two guaranteed berths for the Class 4 Missouri State Cross Country Championships would be difficult. The Pirates ended up going a third route that not many could have expected.

Smithville and Kearney were the top two teams in Saturday’s Class 4 District 8 meet, but with five individuals in the top 15, Platte County will also be able to compete at state, just without the sixth and seventh runners that are the norm. The Pirates totaled 47 points and were five points back of runnerup Kearney as the placements from the Suburban Conference Blue Division Championships were repeated.

Platte County seniors Maddie Klippenstein (fifth) and Jenna Jurgensmeyer (seventh) and freshman Carmen Gentilia (ninth) were all in the top 10, and the top 12 finishers and 14 of the top were from the three teams atop the final standings.

“There were so many nerves going into today, so much pressure,” Klippenstein said. “We just wanted to make it to state, so now I think now that we’ve got it, we’re moving on, I think state’s going to be a blast, and we can all just show off all the work we’ve done and hopefully get some PRs.”

Platte County entered the season knowing the state had increased to five classifications, and the Pirates remained in Class 4 in the new postseason setup that also eliminated the sectional round. This offered a more level path for the Pirates, who were bringing back all seven of their top runners from a year ago.

The returning group included senior sectional qualifiers Taylor Giger (also a state qualifier), Mara Gullet and Ryanne Rhude, but only one ended up in this year’s lineup.

Instead, Klippenstein emerged as the No. 1 after overcoming early season injuries after suffering from pneumonia during last year’s district race while Jurgensmeyer also battled injuries but came back, as well, to give the Pirates an experienced top two. Gentilia and fellow freshman Lydia Doole (12th) made an immediate impact, and Rhude placed 15th to claim the final spot in a positive development for a season full of personal adversity.

This state bound lineup might not have been what Platte County envisioned going in, but the runners have enjoyed the unique season.

“We call them our children because we’ve taught them so much coming up,” said Rhude, who finished in 22 minutes, 1.3 seconds and about 9 seconds in front of her closest competitor. “It’s definitely a different mix than what we were used to because last year was all juniors and one sophomore, so it was definitely different, but we loved having them. They helped us so much.”

Smithville seniors Olivia Littleton and Lily Cutler took the top two spots as expected and led the Warriors to the team title.

Klippenstein hit the 2-mile mark in fourth place but lost a spot in the closing stretch, finishing fifth in 20:45.70. Jurgensmeyer (21:05.70) moved in front of Gentilia (21:12.60) in the closing stretch, and Kearney freshman Heidi Adams landed in between them. The Pirates knew each position would be valuable in the team race as they jockeyed for position with Kearney runners.

“I was hoping for a little better outcome, but that’s OK,” Klippenstein said. “At the last race, they went out super fast, and I had to catch them at the end. So this race, I was trying to go out faster and ended up dying, and they caught me in like the last 800, so that’s kind of disappointing. I was sad I couldn’t rack up more points for the team, but it was the best I could do.”

Doole tied her personal best at 21:30.90 to guarantee her state spot, while Rhude came to the top of the meandering course’s final hill with seemingly little energy left. She wasn’t necessarily aware of her place as she closed in on the finish line about 6 seconds behind Smithville’s Avery Bannwarth.

“I was trying to hold the Smithville girl off until I that hill, and she caught me before it so I was just chasing,” said Rhude, who was delayed in her offseason training due to injury and missed part of the season due to a quarantine. “But I couldn’t lift my knees up high enough to take like real steps so I was struggling. … I didn’t run my best race at conference so I was like, ‘Today, I have to run my best race; otherwise the team won’t

get where it needs to go.’ Definitely, getting 15th is scary, but it definitely helped the team get where we wanted.”

Without Rhude, Platte County would have missed out on a team berth and instead came up with an unconventional one most would have thought difficult if not impossible to achieve. The Pirates have regularly had more than one state qualifier in recent years, including the past six in the largest of four classifications, but have not sent a team since a fifth-place Class 3 showing in 2010.

The most difficult part of this year’s trip will be not having junior Haley Brunner (19th) and senior Kaylee Major (21st) and a host of other potential contributors, including senior Abbie Schwieder, along for the ride.

“I’m really proud of everyone,” Klippenstein said. “We came out here; we did the best we could. It’s a lot better from last year (for me), coming out here and just crushing it. This whole season we’ve worked really hard during practices and everyone has put in the work.

“It’s going to be tough running without them.”