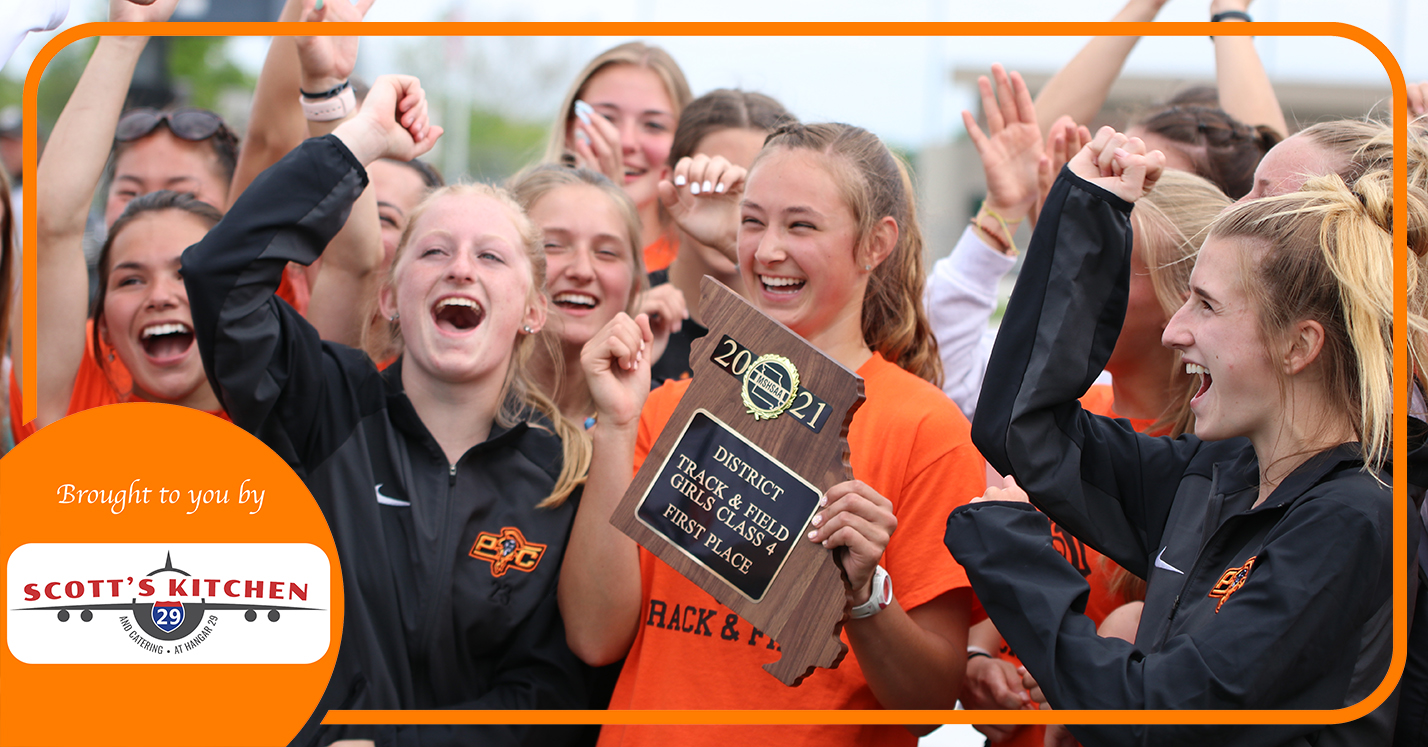 KANSAS CITY — Platte County coaches and teammates milled about the start-finish line just ahead of the final race Saturday.

Haley Luna, perhaps the brightest star senior in an increasingly historic class, gave indications she might be unable to run the anchor leg of the 4×400-meter relay to conclude the Class 4 District 8 meet. The Pirates considered making a late substitution, but they didn’t need to panic and kept her in place, knowing she didn’t have to be at her best.

Platte County’s experienced talented quartet of seniors Abbie Schwieder, Bryn McGehe, Aly Anderson and Luna coasted to a second-place finish, admittedly off the normal pace but good enough. The Pirates had already secured the first district title in program history regardless of the outcome, and the bigger goals remain ahead of them.

“Haley had stacked events today. She was definitely tired; I would be, too,” said Anderson, who ran key legs for the first-place 4×800 relay and runner-up 4×400 team. “But just like in most of our events, we just want to qualify for sectionals. That’s all that matters.

Indeed, no one endured a busier day with the same level of success as Luna, a multiple time state medalist and the biggest reason Platte County could be headed toward unprecedented success in the Class 4 Missouri State Track and Field Championships. She won the 400 and placed second in the 200, while running a leg on the runnerup 4×200 and 4×400 relays.

Luna is the lone individual state medalist on the roster and owns the school record in the 400.

In addition to Luna, Platte County sophomore Reese Pickett (high jump and long jump) junior Riley Smith (100), senior Taylor Giger (3,200) and Schwieder (pole vault) won individual district titles for the team champions. In addition, the 4×800 of Anderson, McGehe, freshman Sisely Mitchell and senior Jenna Jurgensmeyer dominated the field in the traditional meet-opening race, and the 4×400, 4×200 and 4×100 all came in second to Kearney — the latter in school-record fashion.

Platte County ended up with 196½ team points, while Kearney came in second at 181½ with Smithville third at 142.

“It’s great. Coming off of last year’s season with COVID and everything, we came out strong this year,” Anderson said. “We’ve practice hard, and I think definitely our work is showing off.”

More unexpectedly, Smith played an integral role in Platte County’s team title. She leads the Pirates’ soccer team in scoring and has been a limited participant in track to this point.

Smith qualified for the Class 4 Sectional 4 competition this Saturday at Odessa in three events.

“Whenever I came out, I thought I would just run my best, try my best no matter what happened,” said Smith, who last ran track in eighth grade. “It’s really good to see I’ve come that far, and I’m honestly impressed with myself. But it’s good to know that I can still run like I did in middle school.”

Smith also ran the anchor leg of Platte County’s 4×100 relay that also included senior Zaya Dove and sophomores Meah Salzman and Hannah Mand nearly pulled off a noticeable comeback. She leaned at the line and nearly clipped Kearney junior Shelby Singleton at the line, but the Pirates settled for second place in a school record time of 50.98 seconds. They came in just .01 of a second behind Kearney in the photo finish but beat the previous season-best time by nearly a full second.

“It was very exciting,” Smith said, “and I’m really glad that we broke the school record. I can’t wait to keep improving.”

Giger also opened the meet with key team points after a victory in the 3,200 with a season-best time of 12:15.25, about 30 seconds off her career-best in her Class 4 Sectional 4 qualifying run as a sophomore in 2019. Smithville senior Olivia Littleton entered with the top seed, but the longest race of the day was run early in the morning just ahead of the 4×800. She coasted to fourth in the 3,200 well off her normal times to save her legs for the 4×800 and 1,600, while Giger ran her only race of the day.

With just five teams in the 4×800, the times were slow as runners conserved energy for additional races. Platte County took first in 10:01.76 but didn’t challenge the season-best time of 9:53.61 set earlier this year, although they should approach or better that time at some point in the next two weeks.

McGehe finished third in the 800 to earn a return trip to Sectional 4, running a season- and career-best 2:23.82. She previously went 2:26.51 in a state qualifying run at sectionals two years ago but hadn’t hit that mark since after last year’s season cancelation.

With the 3,200 being run early, Luna’s schedule became more compact without the longest race cushioning her recovery period between the 200 and 4×400. She opened by anchoring the 4×200 team that also included Salzman, junior Molly McBratney and Schwieder to second place in the a season-best 1:46.43. That’s about 2 seconds off of the school record Luna helped set with Britteana Curry, Karleigh Wise and Isabelle Geddes in 2018 (1:44.41).

Luna then won the 400 in 59.95, breaking the 1-minute mark for the first time since 2019 when she set the school record at 57.97 while placing second at state with McBratney making it a sweep for Platte County with her second-place finish in a career-best 1:01.80, shaving more than 3 seconds off her previous season-best.

Shortly after, Luna turned in her runnerup finish in the 200 but struggled to find her legs for the 4×400. McGehe gave Platte County the lead on the second leg, and Anderson held the Pirates there with their fastest split of the race.

“Haley’s such a stud. She works really hard and deserves everything,” Anderson said.

Like McGehe and Smith, Salzman qualified for sectionals in three events for Platte County, placing third in the 100 hurdles at 16.89 for an individual spot to go with her sprint relay duties. Dove grabbed the final qualifying spot in that same event, placing fourth at 17.15 in addition to her duties on the 4×100.

Schwieder and junior teammate Maya Sullivan claimed the top two spots by clearing the bar on their opening heights after the other four competitors bowed out at 2.43 meters or lower. Sullivan went on to finish second at 3.35 meters — 16 centimeters off of her previous best.

If not for Schwieder, Sullivan would be the school record in the event. However, the two have traded victories throughout the season with Schwieder most recently second during the Pirates’ Suburban Conference Blue Division championship effort two weeks earlier.

This time, Schwieder cleared 3.50 meters to claim the title and then went to 12-0 in an attempt to break her school record of 3.53 meters. She didn’t look comfortable on any of her three attempts but continued to show what makes her one of the most important cogs for Platte County in the postseason.

Luna, Schwieder and McGehe were three of the key pieces in a 2019 District 8 runnerup finish bettered two years later as a possible portension of making a run at a top-four team state trophy in two weeks.

“I think our pole vaulters definitely get overlooked,” Anderson said of Schwieder, a two-time state qualifier in the pole vault and 2019 state medalist on the state medalist 4×400 team that also included Luna, McGehe and Geddes. “It’s normally off to the side. Nobody sees it, really, but she’s such a huge asset to our team.  She’s broken school records and then she broke her own school record. She brings so much positivity and light to her team. She’s awesome. I love her.”

Pickett put her entire focus on field events for the postseason, not running either hurdles race despite sporadic success there in her first high school season for Platte County. She won a tiebreaker over Savannah sophomore Danica Rodriguez in the high jump after both cleared 1.57 meters and easily won the long jump at 4.82 meters despite being well off her season-best of 5.04.

Platte County senior Olivia Minter finished second in the long jump (4.78 meters, a season-best by 1 centimeter) and also qualified for sectionals in the triple jump, placing fourth in a season-best 9.89 meters.

In the triple jump, Platte County sophomore Kenzie Palmer finished second at 10.59 meters — an improvement of 15 centimeters on her previous career-best.

Because of the 2019 season cancelation due to the pandemic, Pickett, Palmer and Minter will all be looking for their first state berths at Platte County. Minter qualified for sectionals in both the triple jump and long jump as a sophomore but did not advance to the final weekend.