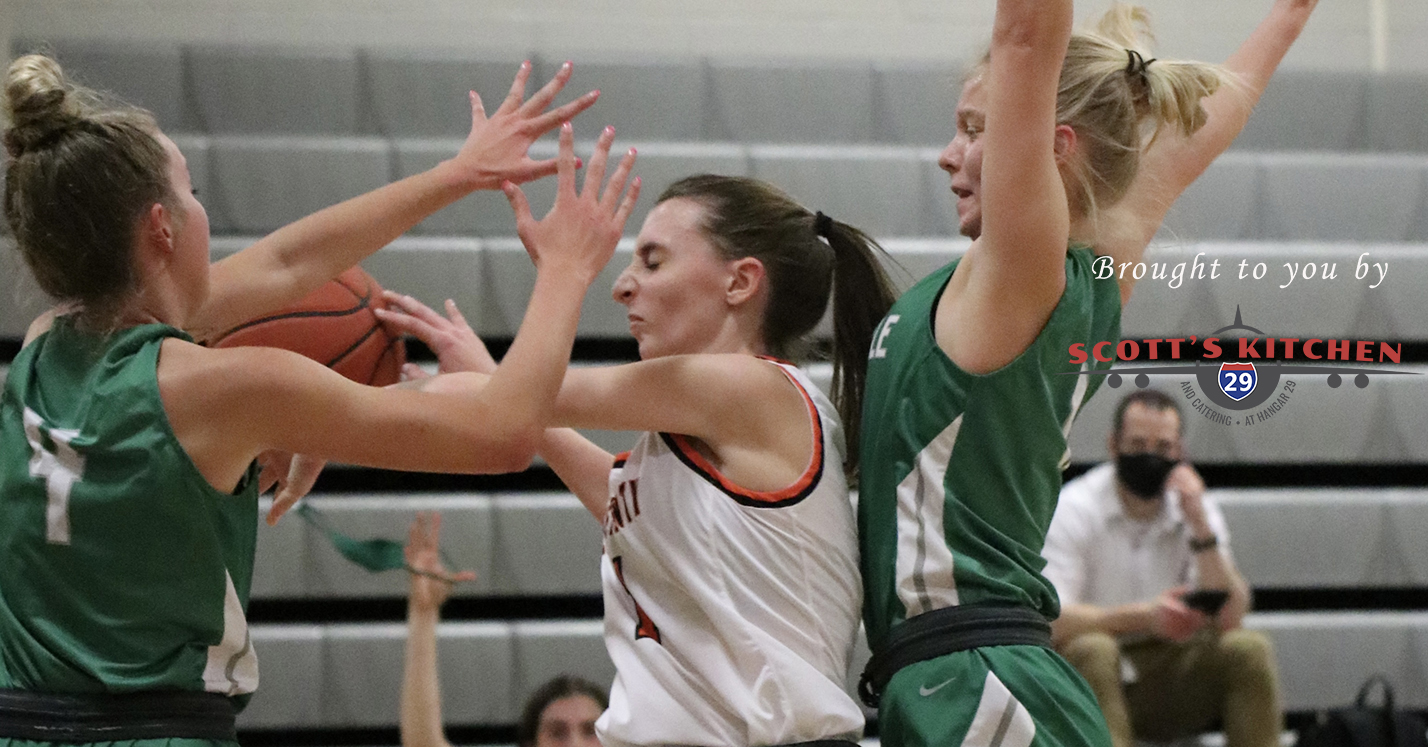 Outside of the final score, Becca Strobbe saw exactly what she needed to see Monday against Smithville, especially when the goal will be to earn a third matchup with the unbeaten Suburban Conference Blue Division champions.

Platte County’s second-year coach again dealt with a shorthanded roster but not shorthanded effort. The Pirates frustrated Smithville for more than three quarters at Platte County High School before the Warriors pulled away late for a 49-34 victory and a season sweep of the rivalry matchups in conference play.

“I was just really proud of the girls fighting tonight,” Strobbe said. “You play the No. 1 team in the conference, No. 1 team in the district and down one starter — not just a starter but one of our most integral players — and that’s the first time this season where I’ll say we fought; we battled. We did the little things right, and I couldn’t be more proud of them.”

Platte County (9-12, 4-7 Blue Division) closed within 34-32 on a putback basket from Robbins early in the fourth quarter.

Smithville responded with eight unanswered points to earn its first double-digit lead before Robbins ended the drought with what would be the Pirates’ final basket. Warriors junior Kenzie Moes immediately answered with a 3, continuing what would become a game-closing 15-2 run.

In the third and fourth quarters, Platte County had multiple possessions with a chance to tie or take the lead but couldn’t come up with the key bucket.

“I think our girls were just a little bit gassed, playing with six players,” Strobbe said.

Platte County opened the game on an 8-2 run with 3-pointers from Pickett and freshman guard Lydia Doole breaking an early 2-2. That’s when the Pirates’ first scoring drought hit, and Smithville responded with an 8-0 run over the next 4 minutes. The Warriors extended the spurt to 13 unanswered and led 15-8 in the final minute of the first quarter.

Pickett then hit a 3 with 20 seconds to go in the first quarter, and a Smithville turnover led to a runout layup opportunity for Peterson, who rimmed out the attempt. Pickett collected and scored at the buzzer to make it a 15-13 deficit going to the second quarter.

“That’s been our problem all year: responding to the runs that teams make,” Strobbe said. “We’re learning to be offensive-minded, and to have those big buckets at the end of the first and feel like we’re back to even, that really helped turn our attitude around and let us know, ‘We’re good; we can do this. Let’s just calm down.'”

Pickett scored all eight of her points in the first quarter, and Doole went to the bench with foul trouble in the second quarter.

After a bucket from Robbins quickly tied the game at 15-15, Platte County couldn’t overcome its lack of depth despite holding Smithville to five points in the second quarter. The two points for the Pirates on the opening possession of the second quarter proved to their last until after halftime.

“Smithville’s one of the best defensive teams we play all year,” Strobbe said. “They do well at mixing it up and communicating.”

Smithville led 24-15 early in the third quarter when Robbins, who added a team-high five rebounds, scored back-to-back baskets to close the gap to five. The Warriors would have their lead down to five again at 29-24 when Peterson hit her only 3-pointer, and she then pulled Platte County within 30-27 when she drew a foul while converting a driving layup and made the free throw for a 3-point play.

Peterson scored all eight of her points in the third quarter to go with a team-high four assists, and sophomore guard Morgan Stewart hit a 3 to cut Smithville’s advantage to 32-30. The Warriors survived a few important defensive possessions, led by four entering the fourth quarter and pulled away from there.

Platte County shot 41 percent from the field but committed a debilitating 28 turnovers. The Pirates have now lost four straight entering the regular season finale at Fort Osage on Thursday. The Indians won an early season matchup between the two teams by four, and the rematch came about late due to other scheduling difficulties for the teams.

The recent skid for Platte County included a loss to Raytown South last Wednesday and then a loss at Grandview the following night when Hupp suffered a concussion. Her return for the rest of the season remains questionable.

Due to Ruskin forfeiting the remainder of its regular season, Platte County finished 4-7 in conference play — a half game behind Ruskin for fourth in the seven-team Blue Division. The Pirates have the No. 3 seed in Class 5 District 16 and open play in the semifinals at No. 2 seed Kearney on Monday. The winner advances to play top-seeded Smithville.

Kearney won both regular season matchups with Platte County, which led entering the fourth quarter of the most recent meeting before scoring just two points in the final 8 minutes of a 35-27 loss.

“Hopefully, we’ll get past Kearney and see (Smithville) again and fight to live another day,” Strobbe said.

The Pirates were unable to complete a season sweep after being outscored 16-4 in the fourth quarter last Wednesday in Raytown.

Peterson led Platte County with 11 points and grabbed 10 rebounds to finish with a double-double that went along with a team-high three assists, but she didn’t score in the final 8 minutes. Robbins added 10 points and had one of the Pirates’ two baskets in the fourth quarter.

Platte County shot just 34 percent and only made two 3s — both from Doole, who finished with eight points.

The Pirates’ late-game struggles also played a factor in a loss last Thursday at Grandview.

Platte County led 32-26 at halftime but managed only 14 points the rest of the way. Grandview took control by outscoring the Pirates’ 20-9 in the third quarter and then holding them to just five points in the fourth quarter. The Bulldogs hit four of their five 3-pointers in the third quarter.

Peterson led otherwise tough-shooting Platte County with 13 points, while Hupp added eight and a team-high 11 rebounds before suffering the head injury. Pickett, Stewart and Robbins all had six apiece in a balanced effort.