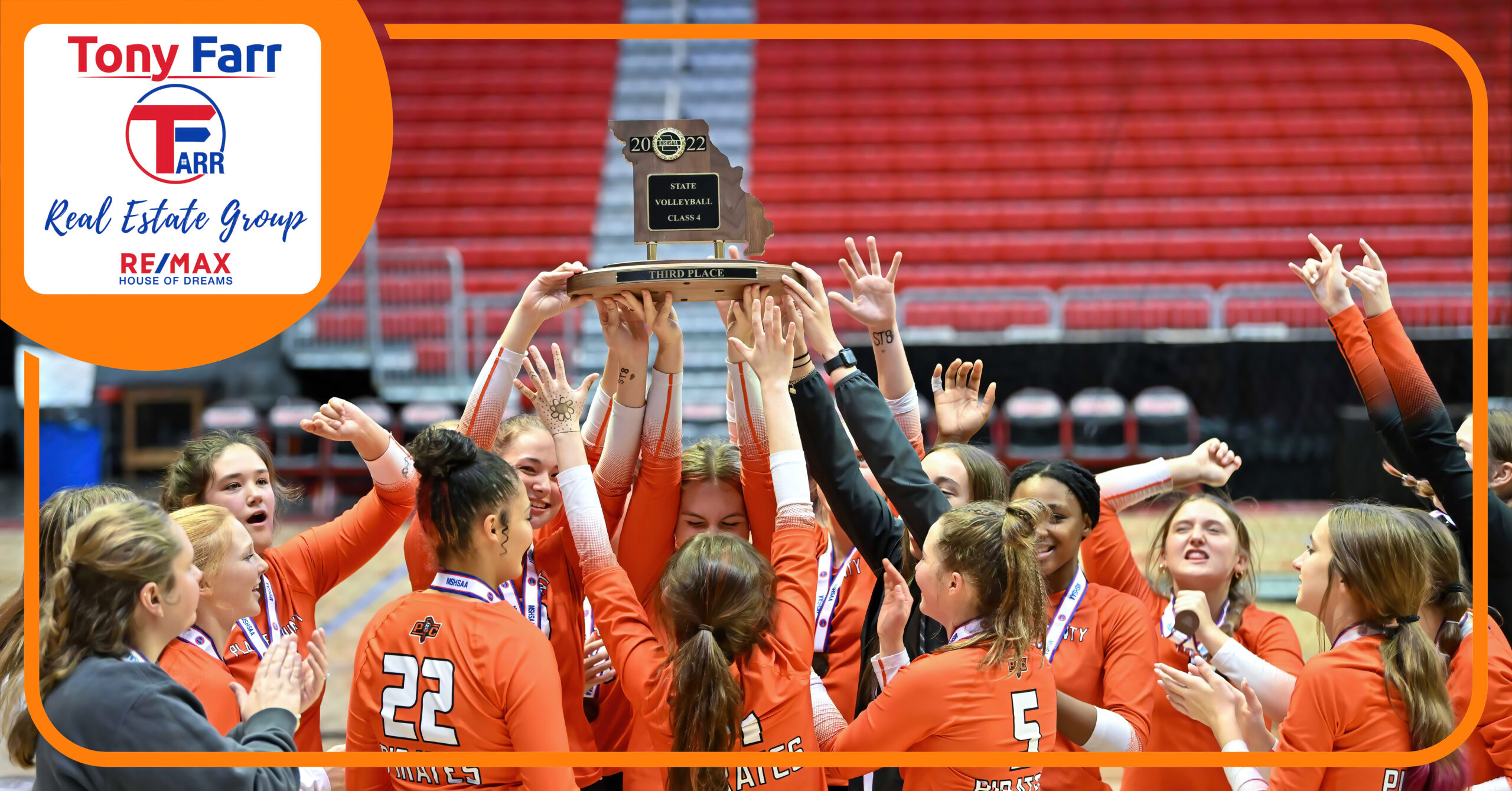 Platte County went into the Class 4 Missouri State Volleyball Championships intent on playing into Saturday. The Pirates nearly did so but not in the desired routine path.

Instead, a series of delays led to Platte County playing late into Thursday night before closing out an epic 25-23, 16-25, 22-25, 31-29, 15-11 comeback victory over Webb City in the third-place game at Show-Me Center in Cape Girardeau. There were ties at 23, 24, 25, 26, 27, 28 and 29 during the fourth set alone, and the last of 221 points in the match came just 10 minutes short of midnight and about 7 1/2 hours after the Pirates’ four-set semifinal loss to Westminster Christian that prevented the program from making the first state title match in program history.

The gutsy effort to stave off defeat in the fourth gave way to momentum that locked up the fifth and deciding set and wrapped up the second state third-place finish in the past three years for Platte County.

“Our third-place match will be something to remember because of the start and end time,” Platte County coach Katlyn Donovan said. “It was a long emotional day of highs and lows. I can remember watching a couple of our girls yawn between sets because we were tired emotionally and physically. With all the circumstances around us, I was proud of how the girls battled and earned third place at state. We could have easily given up, but with our outcome, it just goes to show the determination and grit all the girls had.

“After we won, I told the girls that was the only five-set match we won this season, and it was the one that mattered most.”

Platte County (27-10) accumulated at least 25 wins for the fourth time in four years, and the previous three occurrences ended with exactly 28. A state title would have meant matching that number, but the Pirates instead fended off Webb City to close the season with a win behind 40 assists from junior setter Emma Harned, 15 kills from sophomore outside hitter Karlee Riggs, 14 more from junior outside hitter Kendall Johnson and three service aces from junior Ava Wheeler.

“After our loss in the semifinal against Westminster Christian, we told the girls that you have about 10 minutes to be upset about what happened, but we can’t be upset too long because we had another game that night to focus on,” Donovan said. “I wanted them to be upset that we lost but we couldn’t dwell too long about it because the match already happened and we couldn’t change the results.”

Like the semifinal earlier in the day, Platte County took the opening first set. The Pirates jumped to an 11-7 lead and held on late after Webb City fought back to forge multiple ties. They cinched the 25-23 win and 1-0 advantage on the first set point with an attack error from the Cardinals.

However, even with an improved Platte County attack, which also included nine kills for junior middle hitter Tatianna Murray and seven from senior outside hitter Karsyn Stehlik, in the second and third set, Webb City fought back to take the lead. The teams were tied at 8, 11, 16 and 20 in the third, but the Cardinals closed on a 5-2 run.

Platte County faced a 2-1 deficit for the second time on the daybed eventually held a 21-17 advantage in the fourth. The Pirates relied heavily on the defense with senior middle blocker Madison Hoyt piling up nine total blocks (three solo), and juniors Jenna Wheeler (19) and Avery Walter (18) both finishing in double digits for digs.

Webb City closed the four-point deficit to 22-20 and 23-21 then added a 2-0 run to force the first of seven straight ties that eventually left the teams even at 29-29. The eventual set point came when the Cardinals committed a return error that looked a product of mental and physical exhaustion in a taxing situation.

The momentum carried over, and Platte County led 5-2 in the fifth set and mostly maintained that three-point advantage from there. Match and set point came on an attack from the left for Hoyt with her spike blocked out of bounds.

Platte County’s second playoff appearance in three years came after a one-year hiatus more a product of circumstance rather than lack of ability. In 2021, the Pirates were bumped up to Class 5 and lost the District 8 championship game when Park Hill came back from a 2-0 deficit to win in five sets.

That set off a subdued celebration for Platte County’s players compared to the one a week earlier after a victory that locked up a state return, while a spirited group of orange-and-black-clad supporters left inside the cavernous field house wildly cheered on the result after making a six-hour drive and enduring one tough loss and a nail-biting victory spread across an eight-hour period that likely felt like a workday. Donovan and assistant coaches Darcy Gilpin, Chelsea Rohr and Sam Payne calmly shared a hug after a roster with only Stehlik and Ava Wheeler back from the 2020 team earned another state trophy.

“It meant the world to get back to state,” Donovan said. “We kept telling the girls that a lot of athletes never get this chance to play at state in their high school career so we wanted to make the best out of every situation. I’d like to thank the families, the school district, and community for coming out and supporting us on our trip down to Cape. I know the girls and coaching staff appreciate everyone who came out and showed support for us. Making it to state is the ultimate reward for the hard long season we had, and every girl on this team deserved it. We definitely had our ups and downs, but in the end we came together when it mattered the most to earn our spot back to the Final Four. I am proud of the girls for how they played in the postseason and the determination they showed throughout every match.”

Hoyt and Stehlik were the only active seniors at state with Makenzie Ryerson missing the entire season due to a knee injury.

Platte County came into the season shorter on experience than recent years but with a strong core of juniors plus Riggs to bolster the roster. The Pirates experience some tough moments early in the season and then saw a 46-match conference winning streak come to an end against Grain Valley in the first of back-to-back five-set losses to close the regular season. They responded with an inspired postseason run that included decisive wins over KC East and Smithville, avenging a season-opening setback vs. Kearney, a sweep of St. Michael’s the Archangel in the state quarterfinals and then a third-place Class 4 finish that should contribute to future success whether in Class 4 or 5 next year.

“This senior group is small but mighty,” Donovan said. “Karsyn, Makenzie, and Madison are phenomenal individuals who are going to do great things in their lives. We are going to miss their leadership dearly, but we are excited to see what their future holds. They have dedicated a lot of time and resources into volleyball for the last four years so for them to end their career with a win and third-place finish is a testament of their hard work and dedication to the team and season.”

Three of the top four attackers in terms of kills from this season return for Platte County in Johnson (307, fifth-highest single-season total in team history) and Riggs (265), a solid, athletic centerpiece in the middle of defense in Murray (187 kills, 89 blocks), a now-experienced setter (team-highs of 927 assists and 325 digs plus 48 service aces) and plentiful options for the back row in Jenna Wheeler (255 digs, team-high 56 service aces — fourth most in a single season in program history), Avery Walter (307 digs), Ava Wheeler (255 digs) and junior Ava Filger.

“The future is bright for this program and team,” Donovan said. “With having a small senior class, we bring back a lot of talented individuals for next season who played significant roles this year. We have some big shoes to fill both on the court and as leaders. If we can put the puzzle pieces together again, we have another shot of making a big postseason run.”

Platte County prevailed in a tight first set but ended up with a 25-19, 22-25, 20-25, 14-25 loss. The Pirates seemingly ran out of gas late while riding the ups and downs from Johnson (team-high 11 kills, nine attack errors) while also enduring a relentless attack from Westminster Christian (32-2-5), which produced 56 kills on 165 attempts. There were only seven blocks on the Wildcats’ attack (team-high four assists for Murray), while Ava Wheeler (20), Jenna Wheeler (20), Walter (17) and Johnson (10) were all in double digits for kills with the team totaling 88.

The first set remained tight until the very end when Platte County reeled off a 6-1 run to close it out.

Westminster led 22-16 late in the second but saw the advantage whittled to 24-22 when the Wildcats took a timeout. They scored the next point out of the stoppage then prevailed in an extremely tight second that included ties at 4, 6, 11, 15, 17, 19. Platte County then yielded a 6-1 closing run with a timeout in the middle unable to quell the push, and the Pirates faced a 2-1 deficit.