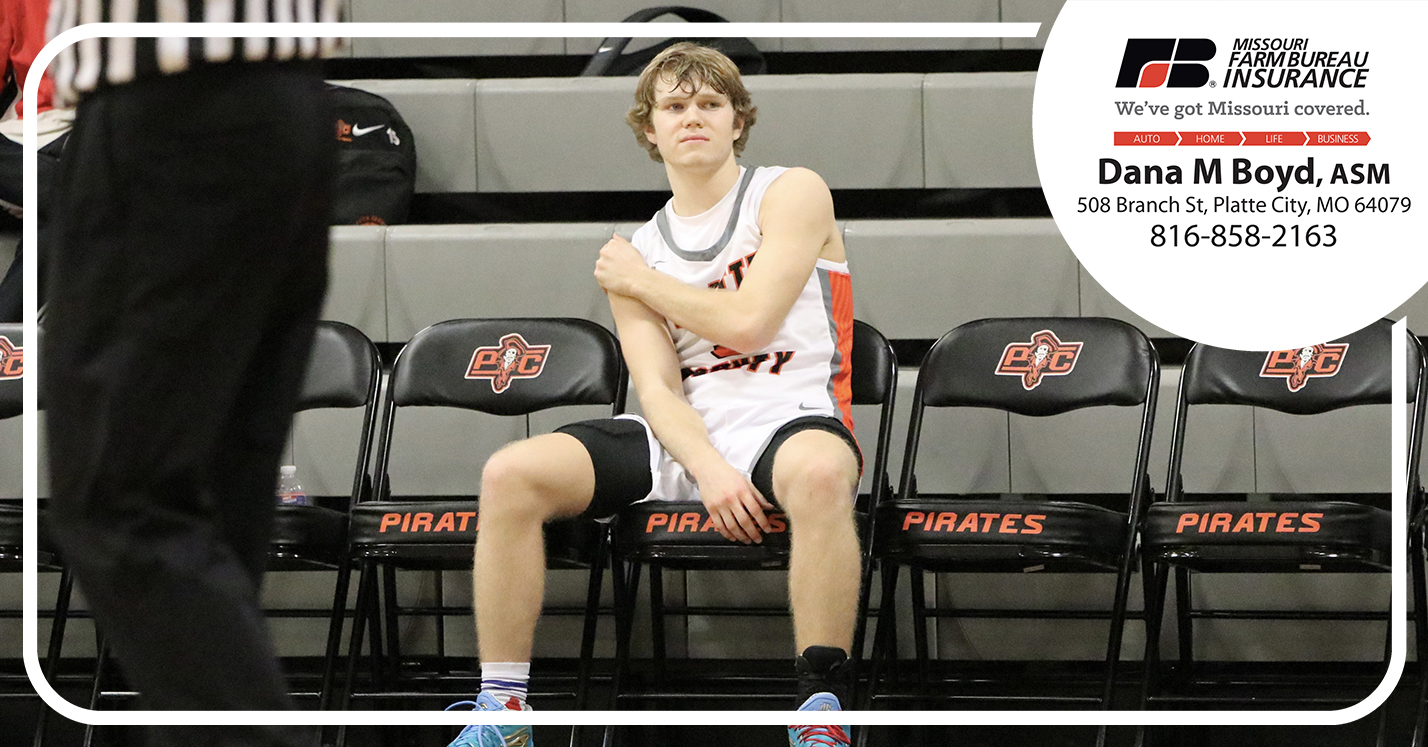 Platte County senior guard Jarett Mueller sits on the bench after suffering a shoulder injury in the fourth quarter of a win over Grain Valley on Friday at Platte County High School. ROSS MARTIN/PC Preps Extra

Grain Valley’s final shot arced up and harmlessly clanged off the rim, allowing Rick Hodge to breathe one sigh of relief and then shift his attention to another concern.

Platte County’s veteran coach watched his players gut out a 63-60 victory in a final nonconference tuneup on Friday night against the Eagles at Platte County High School, surviving the final 6 minute, 4 seconds of regulation without star senior guard Jarett Mueller on the floor. He suffered an apparent separated right shoulder while battling for a rebound along the baseline.

Mueller left the gym to receive medical attention before returning to cheer on his teammates from an isolated chair where he occasionally grimaced and reached over to grab at the afflicted joint.

“We rely on Jarett very heavily on a lot of things — handling the ball, scoring, defense, energy; all those things,” Hodge said. “When you lose that, you lose a big chunk what you’re trying to do on both ends of the floor.

“Now we need some practice time to go through and game plan how we’re going to handle this stuff with him out for the period of time he’s going to be out.”

Mueller poured in a team-high 18 points, while senior guard Jace Trimble added 16 and senior forward Brody Fulk 11 as Platte County finished with just seven players dressed and available. The Pirates were already without junior forward Chandavian Bradley, who missed a week while away on a family vacation, and led by double digits on multiple occasions in the second half but never could deliver a knockout run.

Grain Valley gave a valiant effort, hit 11 3-pointers and nearly took advantage of the opportunity. The Eagles were down 55-47 when Mueller exited the game and came as close as two points in the waning moments as Platte County senior guard Eli Nelson, who made his second career start, split a pair of one-and-one opportunities at the free throw line in the final minute to provide just enough separation.

“With Jarett going out, we obviously lose a big part of our scoring, but the team got together that final couple minutes of the game,” Trimble said, “and we just all banded together as one whole team and won that game.”

Grain Valley hit four 3s in the early stages of the third quarter to cut a 38-29 halftime deficit to 45-41 at the 4:40 mark, forcing Hodge to take a timeout. The Pirates responded with an 8-2 run capped with a pair of transition layups from Trimble, who created havoc with active hands on defense in his typical manner, to go back up double digits at 53-43.

The lead sat 53-45 going to the fourth quarter, and Mueller started the final 8 minutes on the bench. He reentered with 6:49 left in regulation, and 45 seconds later, he ended up on his back along the baseline after an awkward fall while tangled up with Grain Valley junior reserve forward Rhylan Alcanter, who hurt his knee on the play.

Players immediately signaled to the bench for help, realizing Mueller was hurt. Hodge knew, too.

“Right away, right away,” he said. “Because he’s a tough kid and when stays down and looks at you and you can see it in your eyes, you know this is a something a little bit more because you’re used to him bouncing back up, ready to play. When he didn’t bounce back up and was kind of looking toward the bench, that’s when we knew right away we might be without him for a little bit.”

Grain Valley junior guard Avery Garmon, who finished with a game-high 22 points, hit the last of his six 3-pointers to trim Platte County’s lead to 59-54, and the Eagles had multiple chances to close within one possession. Mueller had returned to the bench by this time, and he watched Trimble hit his last bucket on a running floater from the left to make it 61-54 and seemingly put the game away with 37 seconds to go.

Instead, Owen Herbert almost immediately hit another 3 to close Grain Valley back within four. Nelson, who had only a second quarter 3-pointer at that point, went to the line and hit the front end of the one-and-one but missed the second. Herbert (11 points) added his third and final 3 with 15.7 to go to make it 62-60, and after a timeout, the Eagles fouled Nelson before the ensuing inbounds pass.

Nelson again hit the first and missed the second to give Grain Valley one last chance down 63-60. Platte County opted not to foul, and Eagles senior guard Nick Hooper’s 3-point attempt from the right wing missed as time expired.

“We had fouls to give late. We only had three fouls on the scoreboard,” Hodge said. “We were hoping Eli would stick the second (free throw) so I could call timeout and talk to the kids about fouls to give, fouling on the perimeter. But he missed, and then they were in transition. Like you said, then we were holding our breath on that last possession.”

Platte County started slow and needed five early points from Fulk to stay close and then Mueller’s hot shooting to take the lead into the second quarter. Fulk scored the first five for the Pirates, including an important three-point play to cut Grain Valley’s quick 7-2 advantage to 7-5.

Mueller scored 10 in the first quarter, draining a pair of 3-pointers from a spot deep in the left corner. The first triple splashed in to tie it 12-12, and the next put the Pirates up for the first time at 15-14.

Grain Valley made three 3s in the first quarter, two from Garmon, and the teams went into the second quarter tied 17-17.

“They’re a good team,” Trimble said. “We stuck in there. We did weather the storm. It got pretty close, but in the end, we got the win and that’s all that really matters.”

Platte County finally created some separation with Trimble and Nelson hitting 3s early in the second quarter, and Trimble’s second triple made it 26-19. Pirates junior reserve guard Parker Amos then added his only bucket on a 3 to push the advantage back to seven at 29-22 with 3:31 left before halftime.

Mueller had just one field goal in the second quarter, a 3 from the same spot in the left corner moments after he missed a layup. Grain Valley tried a transition break after the errant layup but turned it over with Mueller finding an opening again, draining the shot and then putting three fingers to his head before giving a little bow-and-arrow arm action toward a small but entertainingly vocal Eagles student section.

“That’s kind of where we were telling him to go,” Hodge said. “When they start the game in that matchup zone that they did, we were looking for holes. We were talking to the kids about where the holes are and where they need to be, and (Jarett) found them.”

Trimble, who scored eight in the second quarter and six in the third quarter, added a driving layup with under a minute before halftime to give Platte County its first double-digit lead at 38-27. Grain Valley answered with a bucket before the buzzer to start a trend of trail and chase efforts. The Eagles took advantage of an aggressive defense that forced turnovers but also unintentionally created open 3-point opportunities.

Grain Valley attempted just three free throws but had 11 of 24 field goals come from beyond the arc. Platte County hit eight 3s but also made 7 of 9 free throws and survived scoring just eight points total in the fourth quarter.

“A couple of (the 3s) were hands in the face, coming out at them, and they still buried them,” Hodge said. “There’s not a whole lot you can do with that, just try to weather that. We did, and we were happy to escape.”

Platte County now prepares to likely play without Mueller for at least one game and likely all this week. The Pirates open Suburban Conference Blue Division play Tuesday at Grandview in an early matchup between the two teams that shared last year’s league title.

On Friday, Platte County hosts rival Kearney for the first time this season in another important conference game. The two teams played four times a year ago, splitting the two Blue Division meetings and Kearney capturing the Class 4 District 16 championship game to end the Pirates’ season.

“I would say it’s going to be hard looking just for the rest of us to score,” Trimble said. “Us as a team, our five, we’ve got four more seniors. We’re all ready to gut this out without him.”

Just three days after the teams met in the championship game of the Savannah Invitational, the Pirates came up with another convincing win over Benton in a scheduled regular season matchup Monday at Platte County High School.

Trimble and Mueller combined for 45 points, while Fulk and senior forward Isaac Havemeier added 10 points apiece to give Platte County four in double figures. Nelson (three points), sophomore guard Judah Vignery (three points) and junior guard Boston Wahlert (one point) were the only other scorers for the Pirates.

Up 12 at halftime, Platte County pulled away in the third quarter with Trimble scoring 11 straight points at one point to push the advantage to 49-27. He hit a pair of 3-pointers plus a three-point play during that stretch and totaled 19 of his 22 points in the second half while hitting three of his four triples.

Mueller splashed in five 3-pointers in the first half for Platte County and finished with a team-high 23 points. Vignery and Nelson also hit 3s for the Pirates, who drained 11 shots from beyond the arc total.

Platte County beat Benton 71-57 three days earlier and were even more dominant in the rematch despite being without Bradley. The Cardinals struggled on offense this time around with only freshman guard Myles Bachali scoring double figures with 23, including three of their six 3s. They also shot just 10 of 21 on free throws.