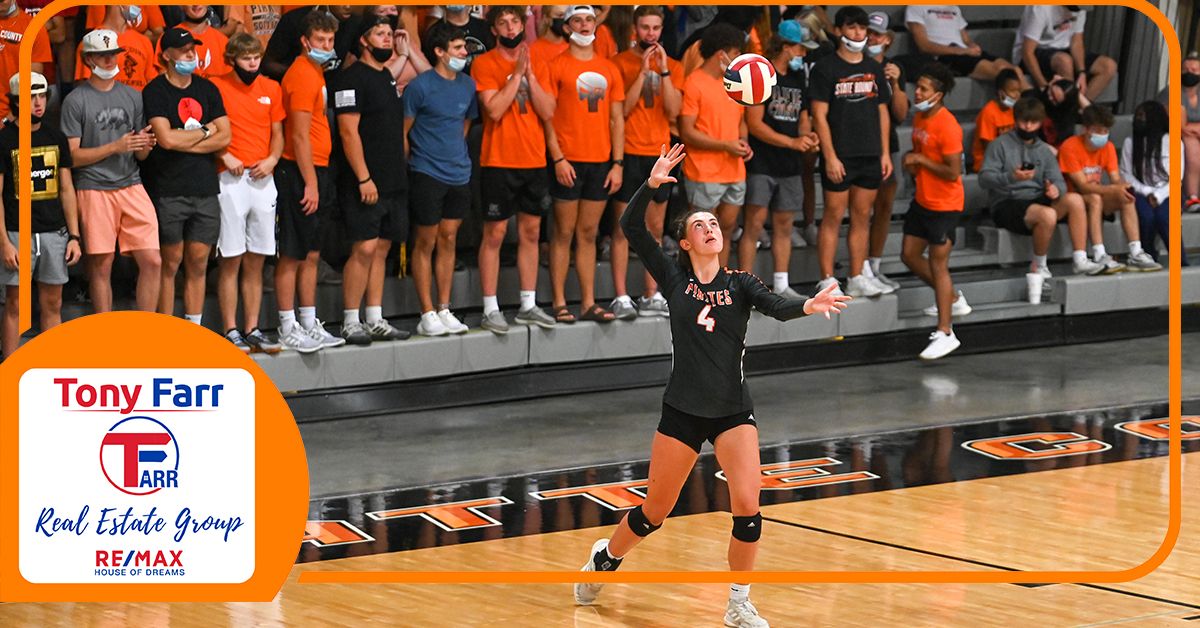 Having sawed down a second-set deficit to one point, Platte County received a jolt of energy with senior setter Emerson Walter coming to the service line.

Walter set the program record for aces in a season a year ago, and a run of three points would give the Pirates the second set and keep hopes of a sweep alive Tuesday against Park Hill . She immediately contributed an ace and helped create a set point, but another lesser-known teammate needed to step up to close out the Trojans and complete a comeback.

Given a chance at a second set point, Platte County junior middle hitter Karsyn Stehlik’s spike caromed off a Park Hill defender into the low ceiling at Platte County High School. The ball rolled on the top of one of the hanging fluorescent lights before awkwardly returning to the floor.

The big comeback in set two demoralized Park Hill, and Platte County pulled away for a 25-17, 26-24, 25-16. Over the years, the Pirates have embraced a unique home-court advantage with their players more used to playing balls off the ceiling.

“We didn’t play (the ceiling) very well tonight,” said Platte County senior outside hitter Mary Grace Hunter, who led the Pirates with 14 kills and 12 serve receives to go with five digs. “But yeah, it really helps a lot when opponents (are) passing it straight up. We’ll get back in the swing of it, but it really helps us out a lot.

Platte County senior Kate Brown, a returning Missouri High School Volleyball Coaches Association pick, added 11 kills, while Walter piled up 30 assists to complement Hunter’s balanced effort. The Pirates return just three starters from last season’s Class 4 third-place state team and entered off a rough weekend that started with learning they would move up to be the third-smallest Class 5 team this year and then a tough two-day run in the Bellevue West Invitational in Nebraska.

Improving to 3-4 with a win in the home opener, Platte County received key contributions from sophomore middle blocker Tatianna Murray (four kills, two blocks), sophomore Kendall Johnson (two service aces), Stehlik (seven kills) and senior defensive specialist Morgan Cox (nine digs, eight serve receives and six assists). The Pirates lost some of the star power from last year’s historically successful team but saw some of the depth they hope carries them in 2021 against Park Hill, which has routinely given them fits with lengthy matches in recent years.

“Our front line is amazing,” Hunter said of the sophomores specifically. “It’s a lot of fun having young girls up in the middle. They’re just hammering away; they’re gaining confidence so I’m really excited to see how they’re going to turn out in these next three years because they’re not going to be done soon. I’m just excited to see their confidence grow and how they contribute.”

After eking out the second set win, Platte County jumped to a 3-1 in the third set behind two initial service points from Walter, who recorded 121 aces as a junior and has 13 in seven matches this season. The advantage quickly to 8-3, 14-6 and then 20-9 —

the largest lead for either team in the match.

Park Hill received 10 kills from junior Shaye Koski and nine from junior Aisha Aiona to stay close in the first set and nearly win the second but ran out of energy after failing to secure the initial split of sets.

“We felt them kind of give up, so it kind of gave us more momentum because we were like, ‘Hey, they’re down; let’s just keep hammering,'” Hunter said. “
Early on, Platte County and Park Hill looked headed toward another matchup with the potential to go five sets.

Murray, a first-year starter and contributor, put up two of her kills early, but Park Hill led 9-7 early. The Pirates answered with a run of four straight points to go up 13-11, but neither team led by more than two until late.

Hunter came up with a creative kill on a scramble to make it 16-14, and Brown, who had been quiet to that point, put away another spike to make it 17-14. Park Hill wouldn’t recover with a return error on the first set point, giving Platte County a 1-0 lead in the match.

“Our focus was to keep them out of system as much as possible so they weren’t able to get (Aiona) the ball,” Platte County coach Katlyn Donovan said. “First and third set, I thought we did that; second set not so much, but when she’s on, she’s on.”

In the second set, Park Hill went up 5-2 before Platte County came back with four unanswered to take the lead back. The set was tied 9-9 with Brown contributing a pair of authoritative kills during the stretch, but the Trojans led for the majority after that point.

Brown did seemingly change the momentum with an improbable point on a last-ditch dig that fluttered over the net and found the floor as Park Hill’s players looked on unable to react. Hunter then added a kill to trim the Trojans’ lead to 15-14.

A 4-0 run capped with the first of Johnson’s service aces for Platte County tied it at 19-19, but the Pirates immediately ceded the next three points. Johnson would add her second ace to make it 22-21, and a kill from Brown brought Walter to the service line at 23-22.

“Whenever (Walter)’s back there, we know she’ll get it over and in; we know we’ll be able to get a few point out of her every time she goes back to the line,” Hunter said. “So it’s huge to have her back there in that moment.”

Walter put up the ace to tie it, and Park Hill needed an Aiona kill on the first set point to avoid going down 2-0. Brown immediately put up a kill of her own to create the second set point, and Platte County’s extra player “Ceil-ia” came up big. The Pirates committed 10 hitting errors in the set but came out up 2-0 and dominated from there to finish the sweep.

“A lot of people are not used to playing on such a short ceiling; we get to practice here every single day so we’re used to the balls coming off the ceiling like that,” Donovan said. “But that second set was ugly, and I told the girls we’re not going to win a whole lot of sets committing 10 hitting errors. I mean they didn’t have to do anything to earn their points. I think we gave them 17 of their 24 points in that set.”

Platte County, which has switched to a 5-1 formation this year with Walter as the lone setter will continue to adjust with a current rotation of eight players that also includes sophomore Ava Wheeler. The Pirates have a lengthy break before returning to action next Tuesday with the Suburban Conference Blue Division opener at home against Grandview.

Platte County went 2-4 in the two-day tournament hosted over the weekend in Bellevue, Nebraska, going 1-2 on Friday and Saturday against all teams from out-of-state.

In the opener, Platte County swept Omaha Westside in a tight 25-20, 26-24 matchup behind 11 kills from Brown and six more from Stehlik, while Walter and Johnson served up three aces apiece. The Pirates wouldn’t win again until Saturday afternoon, losing three straight.

Against Papillion-LaVista, Platte County started strong and faded late in a 25-23, 25-14 loss. The Pirates had just 17 kills total — five apiece from Johnson and Stehlik — as the outside attack faltered. Brown recorded a team-high 11 digs.

Friday’s finale against Duchesne was the opposite type of sweep with the Cardinals prevailing 25-13, 25-23. Cox put up a team-high two service aces plus six digs. Walter led the Pirates with 12 digs and 19 assists.

Platte County also lost its only three-set match of the weekend Saturday morning to the hosts. The Pirates won the first set but faltered late in what ended up an extremely tight deciding set.

Platte county’s second win also came after a tight first set, pulling away for a 28-26, 25-10 sweep of Lincoln Southeast. Walter (4) and sophomore Ava Wheeler (3) led a strong service match with their ace totals, while Brown (12), Cox (7) and Hunter (7) led a balanced defense in digs.

The finale on Saturday resulted in a 25-23, 25-17 loss to Western Christian, the only Iowa and non-Nebraska opponent of the weekend. Hunter (8), Stehlik (6) and Brown (4) led the Pirates in digs.