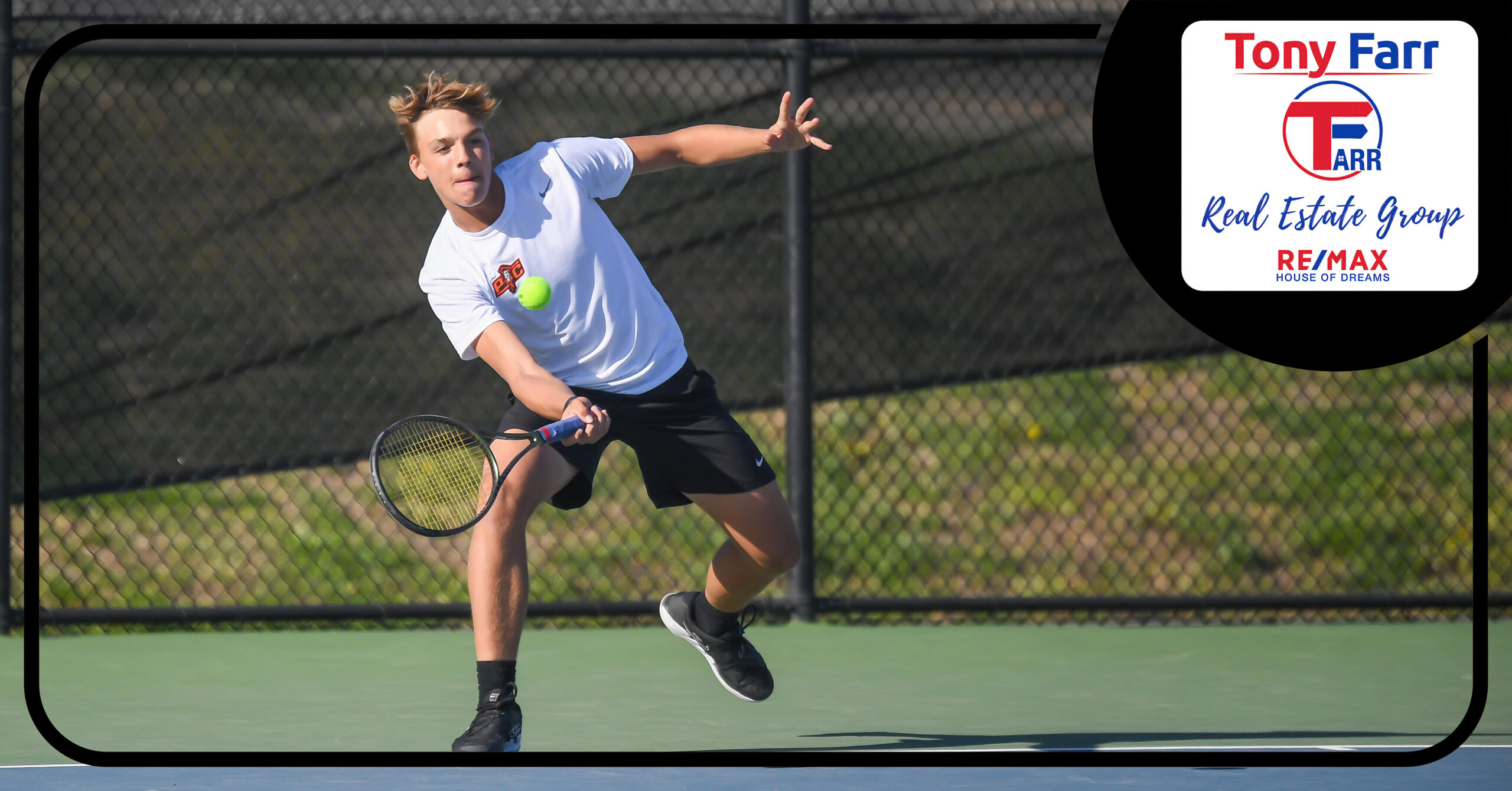 After splitting a pair of tight regular season meetings a year ago, Platte County left no doubt in a pivotal and meaningful rematch with a rival Thursday afternoon. The Pirates took the lead and cruised to an 8-1 victory over Kearney at Platte County High School, clearing the biggest hurdle in the path to a second straight Suburban Conference Blue Division title and just the third in program history.

Platte County entered on a three-dual losing streak but swept the three doubles matches and then won five of six singles matches over Kearney, which dropped last year’s regular season meeting 5-4 before reversing course in the Class 2 District 8 championship with a 5-4 victory to reach the playoffs and end the Pirates’ season.

“It means a lot to me because we’ve been close to winning matches; we just haven’t,” said Platte County sophomore No. 1 Gavin Nichols, who defeated Kearney senior Hayden George-Duncan 6-1, 6-1. “I was hoping today would be the start of a winning streak, and it looks like it’s going to be so that’s good for team. We were really excited, really hyped going into the match, and we were able to follow through, power through.”

Platte County (2-3) continued to roll with the normal lineup, featuring four newcomers not on in last year’s top six. However, Pirates veteran coach Zach Keith did stay with a recent change, pairing Nichols with junior No. 2 Jack Forrest as the top doubles team. They responded with an 8-2 win over Kearney No. 2 Colton Pazdera and No. 3 Leyton Ross.

The other two doubles matches similarly played out with senior Austin Vanek and junior Nathan Vanek won 8-3 at No. 2, while freshman Jack Bralley and senior Shane Duggan were 8-4 winners at No. 3.

A year ago, Austin Vanek started the season as the most experienced returned and spent time at No. 1 and No. 2 singles and has often paired with Nichols at No. 1 doubles.

Platte County tinkered with the top two pairings during a recent run of difficult tournament play, looking to solidify the lineup for the stretch run. The Pirates replaced four key seniors from a year ago but have felt all along the pieces exist to make another run at the first playoff berth in program history.

“I really like the scrappiness of our team,” Nichols said. “I’m really happy with our lineup this year.”

Up 3-0 after the doubles sweep. Platte County eventually jumped to a 7-0 lead with four fairly quick singles victories. Duggan led the way with a 6-0, 6-0 sweep at No. 6 followed by Nichols’ dominant effort at the top.

Nathan Vanek took both sets at No. 4 by a score of 6-3, and Forrest, who continued his strong play for Platte County after ascending from junior varsity to No. 2, prevailed 6-4, 6-3 to increase the lead to 7-0.

Platte County returns to action the week with duals on four straight days, starting with Tuesday’s conference matchup with Ruskin and also including Thursday’s road trip for another Blue Division matchup at Winnetonka. Wins in those would leave the Pirates needing only to topple Grandview to officially secure the conference title.

The week also includes a road test at Staley before a pivotal matchup Friday vs. Grain Valley in a dual postponed due to weather from earlier in the season.

Platte County defeated both Kearney and Grain Valley in the regular season a year ago to earn the top seed in Class 2 District 8. Kearney then knocked off Grain Valley in a semifinal before defeating Platte County in the tight championship dual to keep the Pirates from making more history as a team to follow an individual breakthrough.

As a freshman, Nichols had already won the Class 2 District 8 singles championship — a first for a Platte County player — to become the first singles qualifier for the Missouri State Tennis Championships and only second individual entrant. Previously, only one doubles team had qualified more than a decade earlier, and Nichols ended up placing seventh to win the Pirates’ first-ever state medal.

With snow falling and blustery winds permeating the matches, Platte County played another tight matchup but fell behind 2-1 after doubles. The Pirates’ lone win came at No. 3 from Bralley and Duggan (8-2). Central took the lead with a tight 8-6 victory at No. 1 against Nichols and Forrest. The Indians were in a strong position with junior No. 1 River Flaska then winning 10-3 over Nichols in singles, although Keith called the performance in defeat one of the best overall showings for Nichols in his young and accomplished career.

Bralley and Duggan also accounted for the singles wins, taking the Nos. 5 and 6 matches.

The Pirates’ week started with another tight loss Monday at Platte County High School in what became the second of three straight losses.

Liberty North entered having swept the last three meetings between the two teams but benefitted this time around from the absence of the Vanek brothers. Despite entering as underdogs due to the makeshift lineup, Platte County earned a victory at No. 1 doubles from Nichols and Forrest by an 8-6 score, while Duggan and Bralley lost 9-7 while moved up to the No. 2 spot. The Pirates sued senior Nathan Macaluso and junior Mason McBratney at No. 3.

Platte County’s split in singles ended up being not quite enough.

Liberty North’s wins in singles also included a tight 10-8 win at No. 6.