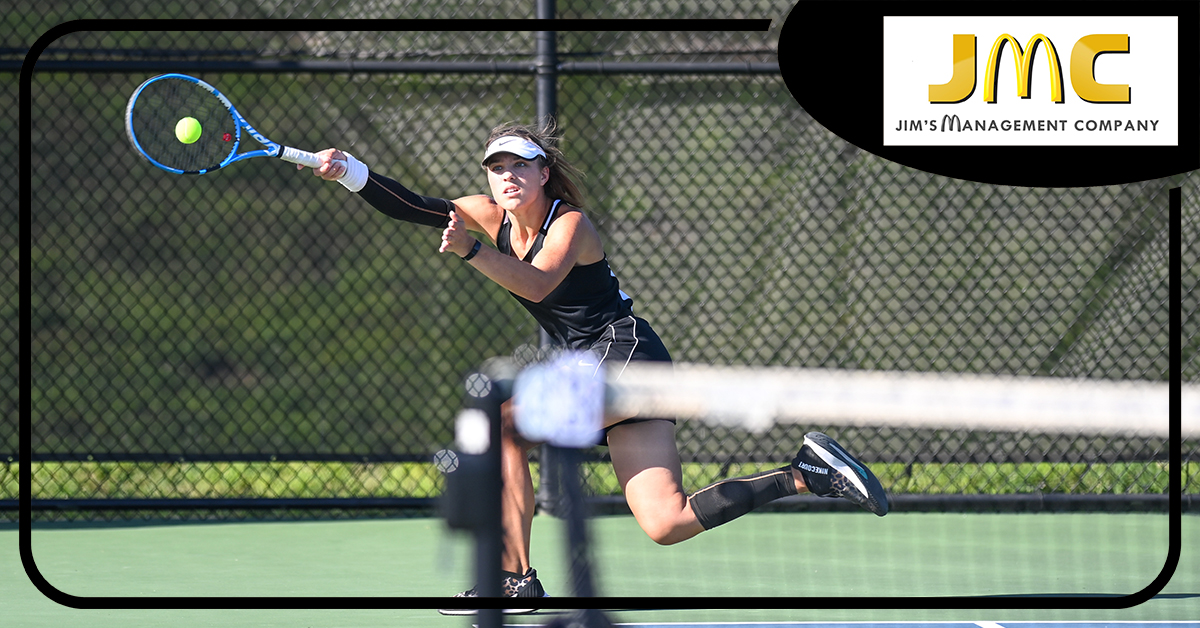 Platte County senior Molly McBratney reaches out to hit a return in a match during a dual against Liberty North on Wednesday at Platte County High School. TODD NUGENT/PC Preps Extra

Platte County lost just two matches across three flights in the uniquely formatted William Chrisman Tournament on Friday in Independence. That meant a team title and three individual flight championships for the Pirates, who were a perfect 9-0 in doubles and 16-2 in singles in a busy day.

Players are divided into three flights with at least two players on each team in each flight. The players then compete in singles and doubles within their flight.

In fact, Platte County played seniors Rayna Garcia and Bri White in the C Flight doubles, and they went undefeated. Garcia also won all three of her singles matches while junior Ellie Fish played the other singles matches and went 3-0. This was the Pirates’ only perfect run through a flight.

Platte County seniors Molly McBratney and Maria Molinari played in the A Flight and went undefeated as a doubles team. Molinari finished with a 3-0 record in singles, while McBratney lost just once.

In the B Flight, Platte County seniors Sophie Curtis and Taylor Mayne teamed for a 3-0 record, and Curtis claimed all three of her singles matches. Mayne went 2-1.

“The girls did a nice job all day and only lost a handful of matches,” Platte County coach Zach Keith said. “Several of the teams that have been relatively strong in the past few seasons were hit hard by graduation last year, so it wasn’t an incredibly difficult tournament. Still felt good to get the win.”

Platte County entered with McBratney as a returning state qualifier and clear No. 1 but also lost one senior to graduation and two other projected top-six players to outside circumstances — Paige Chase (focusing on academics) and Aleah Dixon (knee injury). Molinari, Curtis and Garcia were all in the lineup a year ago, while Mayne played a lot of No. 3 doubles.

Fish (singles) and White (doubles) have essentially stepped in to man the No. 6 spot in joint fashion with Mayne at No. 5.

The Pirates bounced back from a loss a day earlier, dominating a solid opponent Wednesday at Platte County High School.

Opening with doubles, Platte County jumped to a commanding 3-0 lead with a sweep, although each of the three matches were competitive. Garcia and White opened with an 8-5 victory at No. 3, while McBratney and Molinari were 8-4 winners at No. 1. Importantly, Curtis and Mayne took the tiebreaker at No. 2 for a tight 9-8 (7-4) win that provided the right momentum for singles.

Fish ran her recent singles win streak in duals to three straight with a comfortable 10-4 victory at No. 6, and Curtis wrapped up the dual victory with a dominating 10-1 win at No. 3. Mayne also took the No. 5 match 10-7, although Liberty North did earn a split in singles.

Platte County owns a 14-4 overall record in the all-time series with Liberty North, but the Eagles had won the past two.

The Pirates couldn’t overcome a slow start Tuesday at Staley High School, closing the deficit to 4-3 with two singles matches but unable to complete the comeback.

Staley swept the doubles matches to take a 3-0 lead, and a split for Platte County in singles wasn’t enough. However, the Pirates benefitted from Fish taking a 10-7 victory at No. 6, coming back from a 4-1 deficit in the match.

After Mayne lost at No. 5, Staley needed just one more victory to wrap up the dual, but Platte County held off for a while with with McBratney taking a 10-4 decision at No. 1 and Curtis held off a previously unbeaten freshman at No. 3 by a score of 10-8 to cut the Falcons’ team lead to 4-3. The comeback ended there with the Pirates dropping the Nos. 2 and 4 matches, as well.

Staley improved to 5-4 all-time against Platte County, having won three straight in the series.