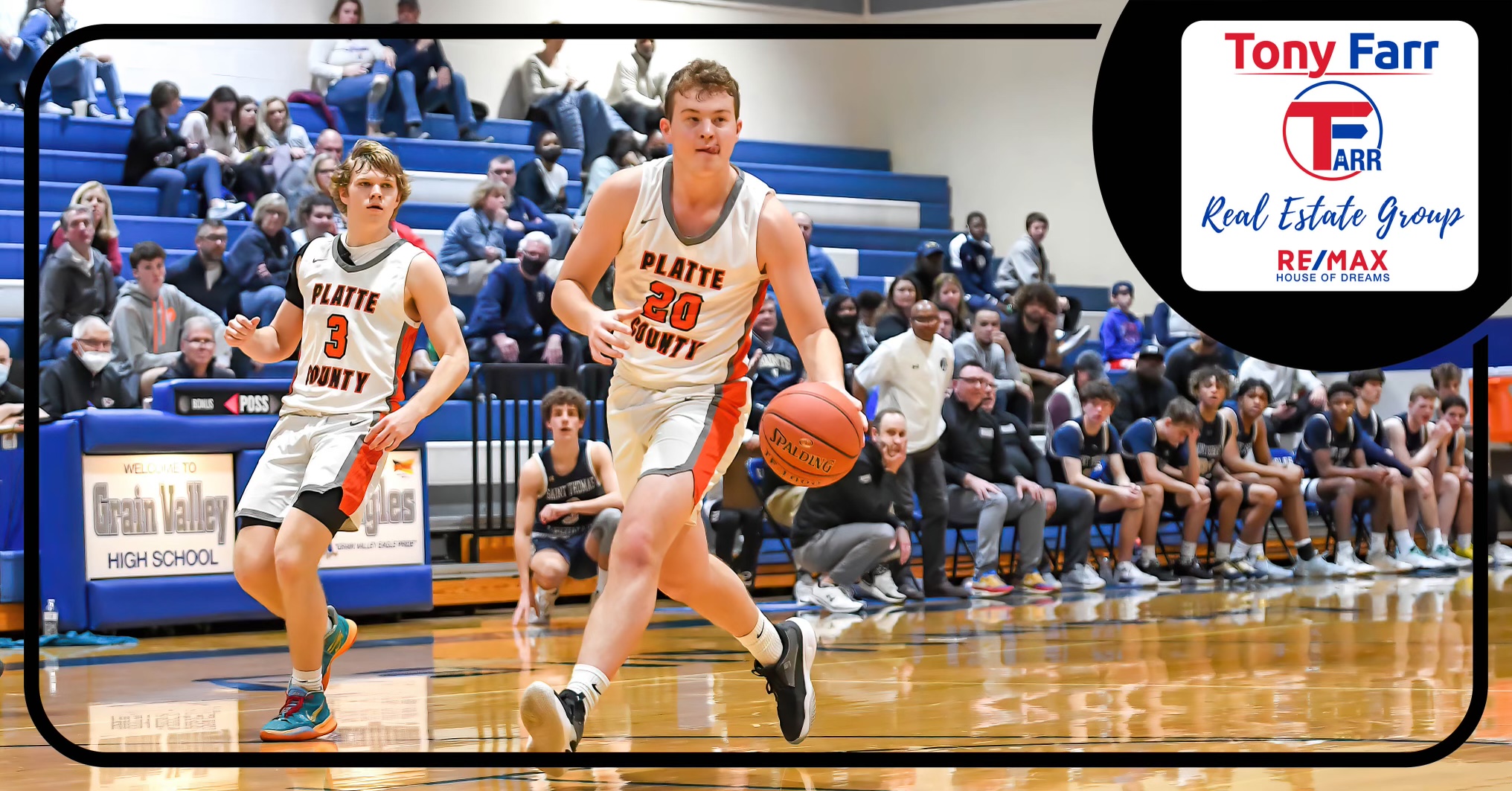 GRAIN VALLEY, Mo. — St. Thomas Aquinas continued to look pesky as the fourth quarter approached. Then the championship game of the Sonic Showdown turned in less than 10 seconds.

Platte County senior guard Eli Nelson calmly buried a 3-pointer from the left wing, his only basket of the game, and fellow senior Jace Trimble immediately came up with the signature play of continually improving career. He stepped in front of a lazy inbounds pass and converted a twisting layup at the third quarter buzzer. The Pirates’ lead went from 15 to 20 in the blink of the eyed ultimately sunk the Saints’ hopes of a comeback bid.

The 72-54 runaway victory Saturday at Grain Valley High School gave Platte County this tournament title for a second straight year and sent the Pirates into the stretch run of Suburban Conference Blue Division play with momentum. The Pirates also won the season-opening Savannah Invitational, and the next tournament will be Class 5 District 8 play in a tough field.

“It’s hard to come and win championships. You only get a couple times a year to get them so it’s always good to win one,” said Platte County senior Brody Fulk, who finished with 12 points and eight rebounds. “We dominated from tipoff to the end of the game, and I’m glad for all my teammates that got accolades tonight.”

Platte County (14-2) came back from an overtime scare against host Grain Valley in the semifinals two days earlier to put in a dominant performance against a talented out-of-state foe. Pirates junior forward Chandavian Bradley (game-high 25 points) and senior Jarett Mueller (14 points) made the all-tournament team along with Trimble, who totaled eight points but impressed with his defense and consistency in the three-game run.

St. Thomas Aquinas trailed by double figures for the entire second half, and Platte County shredded a full-court press look late in the game before clearing the bench after the lead hit as much as 25 with Bradley scoring nine in the fourth quarter alone. He has now gone for double figures in all but one game since the start of the new year and showed off the full range of his game with a pair of 3s, two dunks (one that didn’t count due to a foul on the play) and an array of strong takes to the basket.

“(Chandavian) understands the shooting that we want him to do,” Platte County coach Rick Hodge said. “In other words, they’re open shots, and if he’s not hitting early, he backs away from that part of his game. The thing about Chandavian is he’s such a driver, athletic driver. If he doesn’t take a shot every now and then, teams will just play way off of him and allow it, so when he sticks one early now teams get up, which is what he wants and now he’s driving it to the basket.

“What I like about Chandavian, too, is he’s understanding that if he can get all the way to the rim, the coaches want me to finish that, but if not, he’s looking to kick out. He’s looking to find the cutter or the shooter.”

Platte County senior forward Isaac Havemeier scored an inside bucket on the game’s opening possession, but the Pirates immediately ceded a 7-2 run to briefly fall behind.

Out of a timeout, Bradley immediately stepped out to hit a 3-pointer and then added a layin to jumpstart what became a 10-0 run. He scored seven in that span along with a 3 from Mueller. Platte County then scored nine in the final 2:38 of the opening frame to open up a 21-12 advantage. The Pirates had four shots on the opening possession of the second quarter, and Havemeier missed two free throws after a putback off the third offensive rebound.

However, Platte County junior Parker Amos drilled a 3-pointer on the next time down to make it 24-12 and provide the game’s first double-digit lead. This also started a trend of key buckets from the short bench. He finished with 3 points, matching Nelson’s total, while sophomore reserve Judah Vignery had two points.

Vignery had 14 in the tournament’s opening-round game vs. Marshall, and Platte County has continued to receive some depth despite losing junior Boston Wahlert due to illness in recent games.

“Because we got help from the bench tonight, and we got help from role players tonight,” Hodge said. “Any team that gets that, now you’re looking really good because it takes some pressure off the starters. I mean we made a nice little run there with bench players in the game.”

Havemeier ended up on the bench for an extended period after picking up two fouls in the early part of the first half.

St. Thomas Aquinas eventually took advantage to cut the 12-point lead in half and then close to within five before Trimble came up with a key 3-pointer to make it 33-25. The Saints held for a late shot only to miss and have Bradley grab the rebound. He pushed the ball toward midcourt before feeding Fulk for a quick-touch bank shot to send Platte County into halftime up 10 points.

Fulk leaked out early and nearly allowed an offensive rebound but ended up rewarded at the other end with a big basket.

“Chandavian I thought was going to shoot a half-courter there,” Fulk said, “but he threw it up and I was able to get a last-second layup and kind of give us some momentum going into halftime.”

Outside of Havemeier’s early stint on the bench, Platte County avoided serious foul trouble and the defensive pressure of Bradley and Trimble on the perimeter with their 6-foot-6 rim protecter back to his normal minutes started to pay dividends. Bradley added another 3-pointer in the third quarter, while Fulk and Mueller both got up to 10 points as the Pirates slowly pushed the advantage to 45-30. Havemeier also had a 3 in the third quarter, as he finished with just five points.

Following the flurry to end the third quarter from Nelson and Trimble, Bradley came up with a steal and authoritative one-handed breakaway dunk early in the fourth quarter, and Vignery pushed the lead to 58-34 with his lone basket, a pump fake and converted shot under the basket. Bradley continued to stay aggressive as the advantage eventually hit 64-39 with less than 4 minutes to play.

St. Thomas Aquinas, the third seed coming off a minor upset of St. Michael the Archangel in the semis, only managed seven total free throw attempts and needed three 3-pointers in the fourth quarter to keep the game from getting even more out of hand. The Saints continually made small runs only to have each of them answered.

Bradley also guarded St. Thomas Aquinas guard Will Rost for most of the first half and kept him scoreless, while Nelson and Fulk took up the slack in the second half. Rost finished with just eight points.

“That was kind of it,” Hodge said of Havemeier’s early foul trouble. “Usually, when you’re playing late January and into February, the officials are letting you play a bit more. With that being said, the kids kept battling and playing hard and playing physically, and the fouls didn’t start piling up so we were able to keep playing them the way we wanted.”

Platte County has now won six straight heading into this week’s Blue Division two-sets vs. Winnetonka on Tuesday and at Kearney on Friday — two opponents at the bottom of the current standings. The Pirates, 5-1 in conference games, need to keep winning to remain one game back of Ruskin, which travels to Platte City for a key return game on Feb. 18, in hopes of winning at least a share of a second straight league title.

Ruskin won the first matchup with Platte County in double overtime as the result currently separating the two teams at the top of the standings.

Four players for the Pirates combined to go 8 of 11 on free throws in the overtime of Thursday’s semifinal to hold serve as the top seed.

Platte County held off fifth-seeded Grain Valley in a tight matchup for the second time this season, the first coming back in February when Mueller suffered a right shoulder injury in the second half that cost him two games and has left him still playing in a brace. He had a 3 in overtime and then went 4-for-4 at the line, converting both halves of two key one-and-one opportunities, on his way to a game-high 23 points.

“I’m not going to make excuses for anything. I really don’t want to,” Hodge said. “But I feel like we’re getting to that time of the season where it’s starting to lag a little bit. They looked a little tired mentally and physically the other night. We didn’t attack Grain Valley’s matchup zone as well as I would’ve wanted. It’s hard to attack that. You don’t see it every often.”

Fulk had a three-point play in overtime for Platte County to finish with 11 points, while Trimble also hit the front end of a one-and-one in the extra session to close out his personal tournament-best nine points. Bradley also had 11.

Grain Valley outscored Platte County 14-9 in the fourth quarter to force overtime with all of the Pirates’ offense in that frame coming on three 3s from Mueller. However, the Eagles didn’t have the same outside firepower as in the first meeting, although Owen Herbert hit two of his three 3s during the fourth quarter comeback.

Platte County overcame a slow start with a big second quarter, which which include six points from Bradley and four more from Fulk to send the Pirates into halftime up 24-22. Mueller then scored 21 of his 23 after the break, starting with a 3 and five points in the third quarter. Vignery added another 3 for his only bucket, but the lead stood at five going to the fourth quarter.

The Pirates started fast and didn’t look back in an opening-round rout Tuesday afternoon.

Marshall trailed 44-15 at halftime, and eventually, Platte County played the bench for much of the fourth quarter, allowing Vignery to finish with a career-high 14 points (four 3s) and freshman guard Jaden Peterson to hit a pair of 3s in mop-up duty. Amos also hit a 3 in the fourth quarter for his only basket.

Mueller scored all of his game-high 24 points in the first three quarters with four 3s, while Bradley added 10 and Trimble seven.