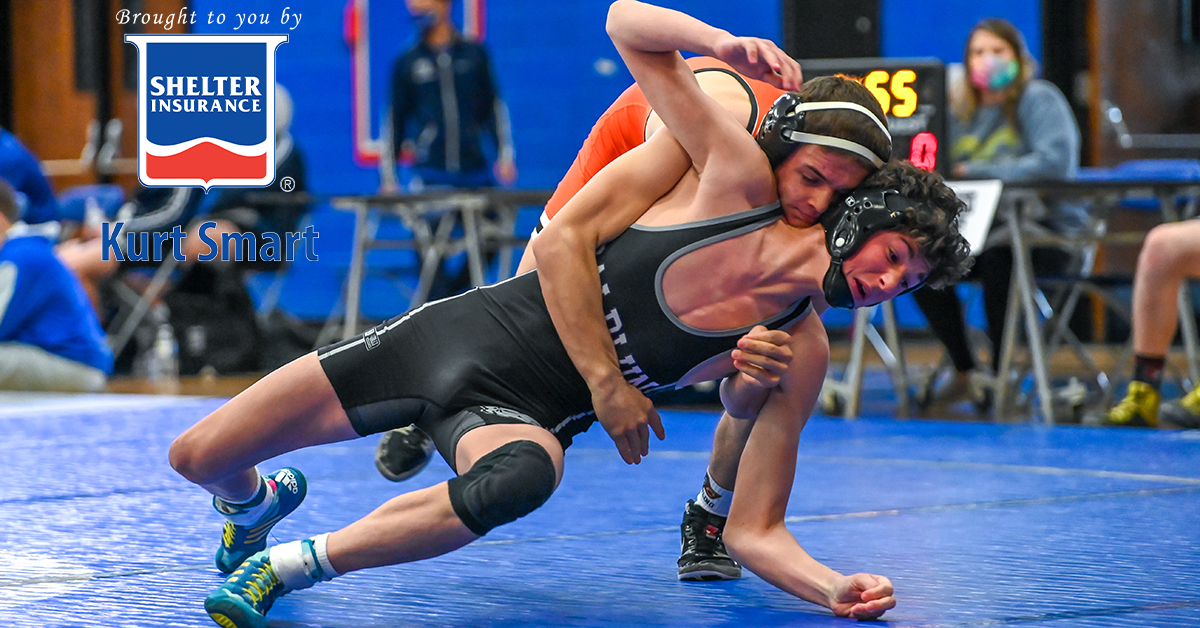 Platte County senior Hunter Burge works to control an opponent during a match in the Olathe South round robin dual tournament Saturday in Olathe, Kan.

Instead of the usual trip north to Wisconsin to take part in the Cheesehead Invitational, Platte County found out-of-state competition closer to home for its first competition out of the holiday break. The Pirates traveled Saturday to Olathe South High School and left with a 5-0 mark in a round robin dual tournament.

The only Missouri team in the field, Platte County knocked off all five Kansas schools, including three teams ranked in the Kansas Wrestling Coaches Association top 10 poll. The Pirates even staged a pair of big come-from-behind wins due to the strength of the middle and back end of the lineup.

“I think it shows where we are at as a team for sure and how we are growing,” Platte County junior Jaydon Walls said after posting four wins by fall and another by an injury default at 195 pounds. “At the beginning of the year, I don’t think we are 5-0-ing everyone here like we did. Right now, it shows improvements. Especially over the winter break, we made a lot of improvements.”

The most dramatic win for Platte County came against Fort Scott, rallying from a 30-10 deficit to win 39-36.

Fort Scott, ranked No. 4 in Class 4A, opened with a controversial victory, which had far-reaching implications for the tournament. Jasper Allison built an 11-0 lead over previously unbeaten Platte County freshman Caden Hulett in the third period when Fort Scott coach Alvin Metcalf Jr. and Allison talked before the officials joined the discussion.

Allison’s left arm was inspected and Hulett was accused of biting him, although he protested that charge, as did Platte County coach Reggie Burress. The official called a flagrant misconduct, which ended Hulett’s day and turned a potential major decision into a six-point win for the Tigers.

Neither team had a 113 pound wrestler, but Fort Scott increased its lead to 24-0 with pins at 120, 126 and 132. Platte County junior Jared Parsons stopped the run with a pin of Cedrik Martin at 138, and Pirates unbeaten junior Eli Rocha (145) followed with a 10-1 major decision to make it 24-10. No. 2-ranked Jacob Stinnett (152) pinned Christian Yocklin for what was the penultimate win for the Tigers.

Five wins in a row helped Platte County surge ahead and earn the win.

Platte County junior Ben McDaniel built up an 8-4 lead over Donald Harper in the 160 match before pinning him 26 seconds into the third period. Pirates junior Blaine Keuhn (170) pinned fill-in Shawn Huffman – replacing a state-ranked Malachi Vann, who was not at the tournament – in 47 seconds. Jake Fernandez, the second heralded freshman for Platte County, held a 7-0 advantage over Cristoble Leon in the first period of the 182 match and pinned him in 1 minute, 4 seconds.

“They were beating us in the beginning and it really motivated the back end to pick it up every time,” Walls said. “We were pretty pressed for points. I wanted to work on a couple of things, but Burress said get a pin real quick and I got in 15 or 20 seconds.”

Platte County senior Jesse Schillinger received a forfeit win at 220 to account for the final points for the Pirates, which had 40 points in the dual but lost one due to unsportsmanlike conduct. Schillinger and Rocha missed the final two competitions before the break but were back to make a big impact.

“We had a good day,” Burress said after the conclusion of all five matches. “The kids fought hard and even under some adversity, we rallied back, and we rolled some teams that thought they had the advantage over us. It was like, ‘Here they come.’ Even the kids that aren’t pinners stepped up and got the job done. … I like it.

“We beat the No. 4 team in Kansas. I think, all in all, it was a great day. We got stuff to build on and we are getting there. We need to keep building and get better each day.”

The Pirates topped the Bulldogs, which was ranked No. 5 as a team in Class 4A in the first of the five duals.

Hulett won the first match at 106 by major decision, and Platte County added five victories in a row between 120 and 145 to build a 29-6 lead over the Bulldogs. The Pirates wouldn’t trail again after giving up the forfeit at 113 due to an open spot n the lineup.

Schillinger (220) lost a 3-1 decision to Toby Thomas, ranked No. 2 in the state in Class 4A. The match was 1-0 going into the third, but a reversal gave Thomas a 3-0 lead. Schillinger escaped with 53 seconds left but could not come up with a tying takedown.

The Pirates strung together five straight wins two different times against the Owls, a Class 6A school.

Eight of 11 victories for Platte County came by pin — Leary, Lueders, Burge, McDaniel, Keuhn, Fernandez, Walls and Schillinger. Hulett had a major decision and Parsons got a forfeit win, while Rocha added another tech fall, this one 17-1.

“Honestly, I think I had a pretty overall good day,” Rocha said. “I think I could’ve done things different and did things better and a little bit more cleaner. With me, I like the tech fall, but from the team standpoint, they should’ve been pins.”

Platte County then won the final 10 matches in a mixture of mostly pins and forfeits. Burge, McDaniel, Keuhn, and sophomore Mar’Ques Brown (285) took forfeit wins, while Walls held a 2-0 lead over Luke McNeal-Clayton after a quick takedown. But only 48 seconds into the match, McNeal-Clayton injury defaulted for another six-point win for the Pirates.

“I think we all wrestled pretty hard, and I think we were rallying off each other,” Rocha said.

The Pirates concluded the day by beating the host Falcons, which entered with a 3-1 mark and had a shot to forge a tie at the top of the standings.

Olathe South, ranked No. 10 in Kansas Class 6A, took another 12-0 lead early on the forfeits, but Platte County won the next five to take a 29-12 lead thanks to pins for Leary, Lueders and Burge; a forfeit to Parsons and a 16-0 tech fall from Rocha. The Falcons then won three of the next four matches – McDaniel got a forfeit at 160 – to close within 35-27 with four weight classes left.

At 182, Fernandez lost to state-ranked Zack Leskovac in a 5-4 decision. Fernandez held a 4-3 lead after Leskovac, No. 3-ranked in Class 6A, chose neutral to open the final period. The decision paid off for Leskovac, who got a takedown and took a 5-4 lead.

With 2 seconds left, Fernandez appeared to have hopped his way out of Leskovac’s grasp for a tying escape, but the official didn’t award the point even as wrestlers on Platte County’s bench jumped and celebrated, thinking the match was tied.

“Fernandez lost a close one there,” Burress said. “He was pretty sure he was out and the kid was still in but you aren’t going to get that call in Kansas if you are a Missouri guy. I understand that. I will still let you know about it a little bit, but I understand that.”

After that close loss, Walls locked the dual up with a pin, and Schillinger won by forfeit to make it 47-27.

Platte County will have its first home competitions of the year this week. The first is Thursday, Jan. 14, when conference rivals Raytown South, Winnetonka and Ruskin visit Platte County High School, starting at 5 p.m. On Friday, Jan. 15, Blue Springs comes to Platte County for a dual that starts at 6 p.m.