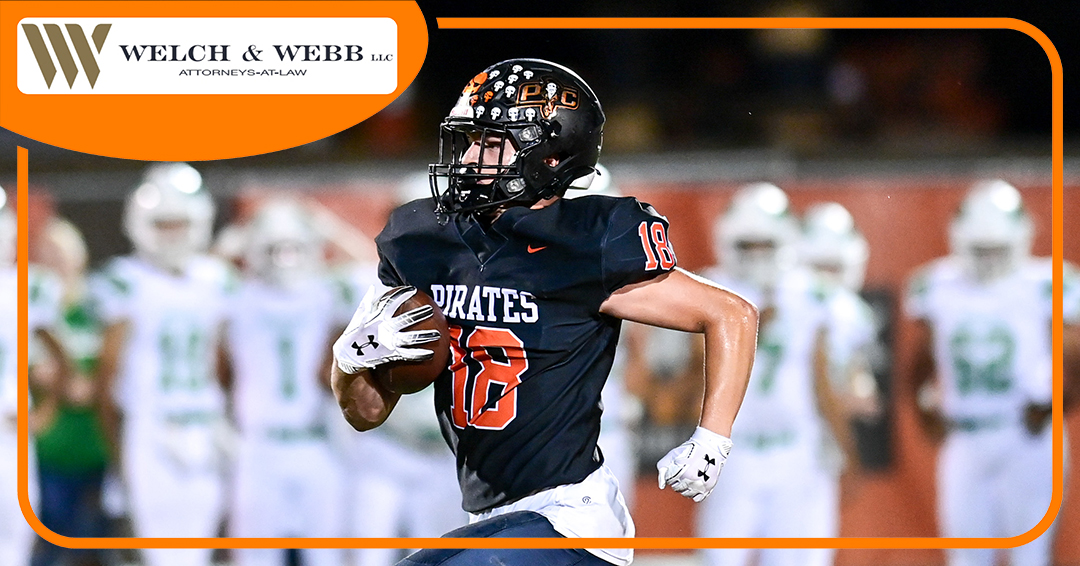 The ball bounced up directly into the arms of Cameron Wolfe, and after an 83-yard dash the other direction, Platte County suddenly felt a breath of life where none previously existed.

The Pirates junior safety scooped up a disastrous fumble from Smithville senior running back Hayden Sigg and returned it for the first touchdown of his career, cutting the deficit to seven points with plenty of time left in the fourth quarter. However, the Warriors answered back with a time-consuming drive that resulted in a field goal and ended the potential for a late-game collapse.

Smithville held on for a more-dramatic-than-necessary 20-10 win Friday night at Pirate Stadium after ultimately crippling Platte County’s offense for the entirety of the critical Suburban Conference Blue Division matchup.

“Smithville controlled the game,” Platte County coach Bill Utz said. “I mean they did a great job. I’m not going to take anything away from them. We have to get better at being able to dictate that a little bit better. They’re a good team, a good ball club.”

Platte County (3-2) saw a three-game winning streak come to an end against Class 4 No. 1-ranked Smithville (5-0), which has now won twice in the past nine meetings between the longtime rivals. The Pirates dropped from No. 7 to a tie for 8th with 2020 Class 4 state champion Helias in the most recent Class 5 Missouri Media poll.

More immediately, Smithville took control of the Blue Division standings, while Platte County will need unlikely help to have any shot of at least a share of a fourth straight conference title.

“We need to regroup and kind of get back to doing what we do best,” Utz said.

The result seemed inevitable as the fourth quarter started with Smithville ahead 17-3 and back in the red zone with a chance to extend the lead.

Instead, Platte County forced a third and 4 at the 9 when Sigg, who finished with 138 yards on 34 carries (4.3 yards per carry) took a counter handoff to the right before changing direction back left on a play doomed from the beginning. Pirates sophomore defensive tackle Kohry Woessner (one tackle, one for loss) poked the ball loose, and Wolfe picked the ball up already at full stride and outran Warriors junior quarterback Andrew Hedgecorth to the opposite end zone, much to the delight of a suddenly jubilant home sideline.

“It bounced where it needed to be, and then he finished it off. That was a great play for (Wolfe),” Utz said.

Platte County then needed the defense, which forced three turnovers and three punts against a previously unstoppable offense, to make one more stand to give the struggling offense one final chance at a potential game-tying or game-winning drive.

Instead, Smithville marched 73 yards in 12 plays, converting a key fourth-and-3 at Platte County’s 34 with a 16-yard pass from Hedgecorth to senior wide receiver Keltin Nitsche. The 13th play ended up being a 24-yard field goal from senior kicker Noah Schuetz, his second of the game, to make it 20-10 with just 3:40 to go.

“Even going down a score or two, our defense we feel very strongly about,” Utz said. “And they always keep us in it. There’s always a play they can make, and they’ve done it not just this year but for so many years, giving us an opportunity to come back a lot of times. That’s always going to be the case.

“When we got to that spot (down 17-10), Smithville did a good job of not allowing that momentum to grow and put a stop to it.”

Platte County’s offense finished with just 101 yards and needed the 36-yard completion to Rhoden on the last play to reach that number. Parsons went 8-for-25 passing for 78 yards, while junior Nate Walls led the backfield with 29 yards on 10 carries, serving as the main ground option with senior running back Ben McDaniel limited to two carries for 5 yards due to a shoulder injury suffered the week before in a shutout victory over North Kansas City.

Rhoden led Platte County’s receivers with 38 yards on two catches, while junior Carter Salzman made three catches for 16 yards. Tristan Magnuson, a junior who entered with touchdown catches in consecutive weeks caught two passes for 21 yards, while McDaniel added one for 3 yards.

“Everything was just a little bit off,” Utz said. “Whether they forced it into us or we were just off, it just didn’t click the way it should have. We have a lot of things to clean up there. Some things got exposed, but they’re a veteran defense that does a great job. But it was more us not making the play when we needed to.”

Platte County’s defense entered having allowed just three points in the three-game winning streak — 35-3 over Kearney, 24-7 over Grandview and 29-0 over North Kansas City. Grandview’s touchdown came on an interception return for a touchdown, and the Pirates hadn’t allowed an opposing offense any points since Kearney’s field goal on the Bulldogs’ first possession of Week 2.

Smithville ended up with 394 yards of offense with Hedgecorth going 16-for-25 for 247 yards, while Platte County limited Nitsche, the typical top target, to seven catches for 61 yards. However, the Warriors used a pair of gamebreaking completions to senior No. 2 receiver Rhett Foster on his career night (six catches, 174 yards) and a sustained drive at the end of each half to deflate the Pirates’ effort.

Platte County senior safety Cade Fowler finished with a team-high 11 tackles (one for loss) plus a pass breakup, while senior linebackers Trevor Scott (10 tackles, one for loss) and Blaine Keuhn (eight tackles) and senior defensive end Jaydon Walls (eight tackles, two for loss) were their typical consistent presences. Wolfe added five tackles to go with his touchdown, one year after grabbing a key interception in a dominant win over Smithville, and senior safety Landon Fulk contributed four tackles and a pass breakup.

“The defense played great,” Utz said. “They did some things to keep us in it.”

Smithville took all the early momentum on the game’s opening possession when facing an initial third-and-5 after two short runs from Sigg. Hedgecorth found Foster on the left side after a Platte County defender fell down, and Pirates junior defensive end Chandavian Bradley narrowly managed to chase Foster down from behind and force him out of bounds after a 53-yard gain.

Six plays later, Schuetz hit a 23-yard field goal after a 5-plus minute drive to put Smithville ahead 3-0.

Parsons then threw his first interception to Smithville junior Cody Simoncic after an initial Platte County first down. The Warriors started at Platte County’s 29 but ended up punting the ball away on a quick kick after the first of the Pirates’ key defensive stops.

After an exchange of punts left Platte County with the advantage in field position, Parsons led the first drive into Smithville territory, but a costly first down sack doomed the drive. However, the Warriors made their first mistake on the ensuing punt when the ball caromed into Simoncic, and Harmon — the long snapper — covered the loose ball at the 16.

However, Platte County managed just 3 yards on three plays and settled for Rhoden’s 31-yard field goal to tie the score at 3-3 with 8:16 left in the half. The Pirates then immediately grabbed another opportunity to take the lead.

Bradley, a top-tier Class of 2023 collegiate recruit who finished with four tackles, went high to deflect a pass on Smithville’s next drive, and Smith-Dean, playing with a cast on his right hand for a second straight due to a broken thumb corralled the ball out of the air for his first interception since recording two against Kearney. The Pirates again drove into plus territory, but Parsons’ deep pass toward Salzman on third down resulted in an interception near the end zone.

“There in the first half we had a couple of opportunities down there where we should have got more points than we did,” Utz said. “Really, we got lucky on the one field goal after the botched punt by them gave us field position, but we have to get more.”

Smithville took over at its own 2, and after an initial run narrowly avoided a safety, Hedgecorth led the game’s definitive drive. They went 98 yards and ate up nearly the entirety of the final 5:14 of the second quarter. Hedgecorth hit Foster for a contested 41-yard completion that set up the eventual score.

Platte County made two straight stops in short goal-to-go situations to force a critical third-down decision at the 2. Out of timeouts, Smithville coach Jason Ambroson made a gutsy call to send his offense back out, and Sigg danced in from 1-yard out on a dive up the middle. If the play had failed, the final 12 seconds would have run off the clock and left the game still tied.

Instead, Smithville went into halftime up 10-3 with Platte County set to take the opening kickoff of the second half.

“You want to do the exact opposite,” Utz said. “You want to score right before half and then get the ball right back, ideally when you defer to start the game. You can’t give up a touchdown right before half. That’s a backbreaker, especially the way it happened where we had them pinned.”

Platte County’s offense never came up with an answer, gaining only six first downs total — two on the first drive of the third quarter — and going 2-for-12 on third downs.

Smithville’s next big connection from Hedgecorth to Foster came on its second possession of the second half. The ball was intended for a different receiver but deflected off his hands and directly to Foster behind the play, and he ran untouched for a 53-yard touchdown to increase the lead to 17-3 with 3:22 left in the third quarter.

Platte County ran just nine plays the rest of the way with a punt and two turnovers, although Wolfe’s touchdown gave a brief lifeline. Instead, the Pirates fell to No. 2 in the Class 5 District 8 standings behind Fort Osage (4-1) and lost control of their destiny in both the conference and postseason seeding race with four weeks left in the regular season.

This week, Platte County travels to winless Ruskin (0-5) in the first of three straight conference games. Week 7 will be homecoming vs. Winnetonka (4-1), winners of four straight and now the only other unbeaten Blue Division team besides Smithville.

“Conference is important to us so that is a blemish, and we need some help now,” Utz said. “From a district standpoint, it doesn’t change a lot because we can’t control the points and the standings. We just have to go take care of us.”