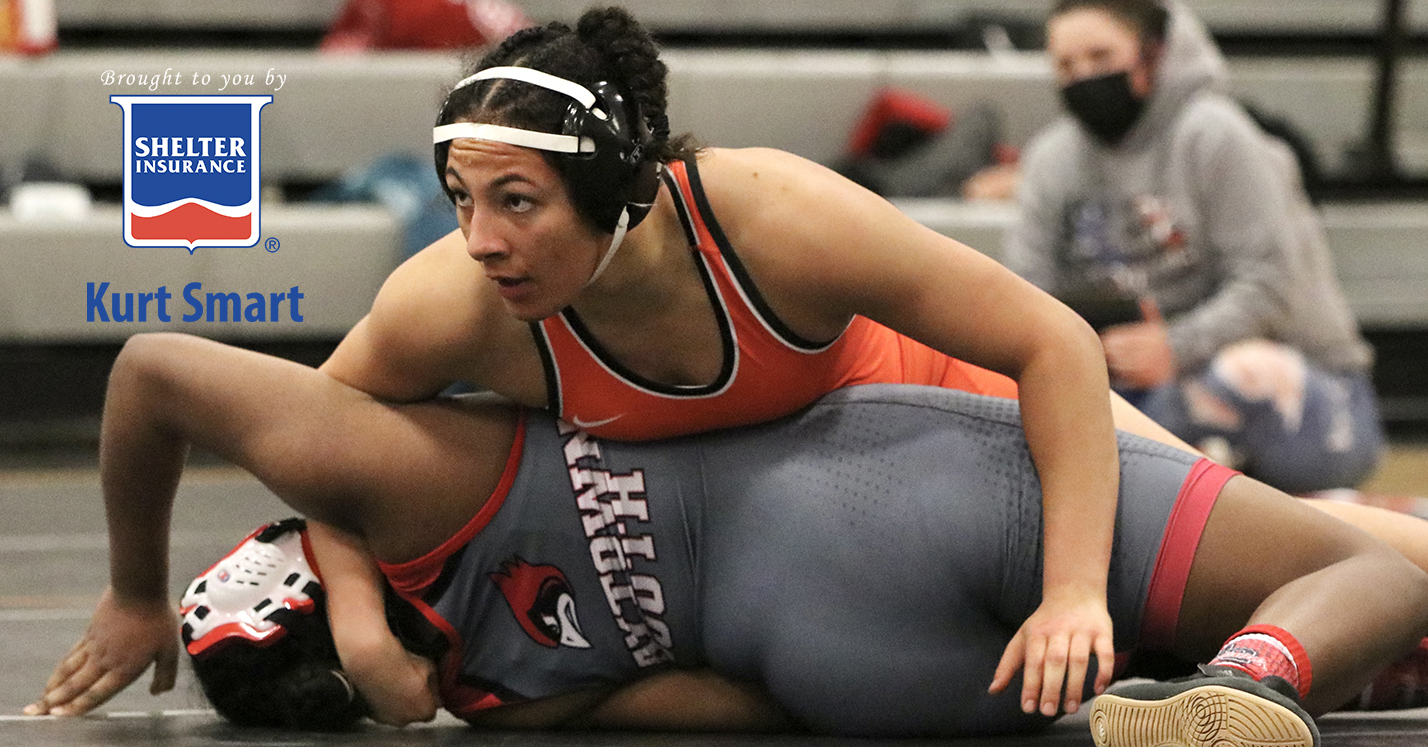 Platte County went 5-0 in matches wrestled and sneaked away with a 31-29 victory over Kearney in the KC Duals on Friday in Liberty. The Pirates went 1-3 in the round robin format, bringing just six wrestlers total in typical shorthanded fashion for the small but strong roster.

Overall, Platte County went 13-3 in matches wrestled with senior Sarina Bertram (3-0) and juniors KayLyn Munn (2-0) and Elizabeth Humburg (3-0) going unbeaten. Bertram picked up a pair of falls and a major decision and was named most outstanding wrestler for the tournament.

“Compared to last year, I feel like I’ve improved,” said Bertram, who along with Munn became the first Missouri State Wrestling Championships medalists in program history. “And I feel like this year now that I’m in a lower weight class that I’m more able to keep up with these girls now; I’m more able to take shots. I’m feeling very confident this year. I’ll tell you that.”

Platte County went into the final dual at 0-3 and knowing Kearney would take 30 points from five forfeits.

However, Humburg started the dual at 127 pounds with a 14-2 major decision over Ruby Freestone, and sophomore Audrey Call followed with a first period pin to make it 12-0. The score was 12-12 when Bertram came up at 159, and she needed just 50 seconds to give the Pirates the lead back. It was tied at 18-18 when Munn came up, and she pinned Jaden Craig in 3:30.

Tied again at 24-24 after another forfeit, Platte County took the lead back for good with junior Chey Weir’s 5-2 decision over Laney Cecil at 102. Pirates junior Haley Burge then took a forfeit at 107 to make it 31-24 with only one more open weight left.

Kearney closed within 31-30 with the last forfeit but also lost a team point for unsportsmanlike conduct.

“It’s been amazing,” said Bertram, who ranks No. 3 at 151 in the latest Missouri Wrestling rankings while still wrestling primarily at 159. “The girls improved so much over the last year. We’ve been able to get in the top 10 in most tournaments.

Platte County opened the day against state power Holt and came away with wins from Humburg (pin), Call (10-0 major decision) and Bertram (another 50-second pin). The Indians won the dual 54-22.

In the third round, Platte County came up just short in a 42-30 loss to Smithville, which scored 30 of its points through forfeits. There were only two matches wrestled with Call losing by fall, and Burge scoring the Pirates’ lone win with a pin of Ruby Scarborough in 3:23.

Platte County also lost to Lafayette (Wildwood), 36-26. However, Munn scored a key 2-0 decision over Jayla Jones in the 195 match, while Humburg gutted out a 9-7 decision over Maddie Johnson. Call (12-3) and Bertram (15-3) both had major decisions, as the Pirates went 4-0 in the matches wrestled.

Munn ranks No. 6 in the most recent Missouri Wrestling rankings at 195.

The Pirates swept two duals in their home debut for the season Thursday night at Platte County High School. However, there were only four matches wrestled total in 30-18 and 30-9 wins over Winnetonka and Raytown South.

In the opener against Raytown South, Platte County had pins for Call and Bertram. Call finished her match in the first period, while Bertram built leads of 12-0 and 14-1 before pinning Zayla Vann at 4:59. Bertram continues to shine on her feet but has continued to progress in the top and bottom positions in just her second year wrestling.

“I’m starting to try to work toward those,” said Bertram, who has committed to continue her wrestling career at William Jewell. “I’m not a big fan of it. I’m more just waiting for (coach) Burress to give me (the neutral) call so I can just go straight to them.”

Platte County lost the only match wrestled against Winnetonka. Humburg built an early lead 5-0 lead on Madison Buell, who came up with a takedown and pin midway through the second period.