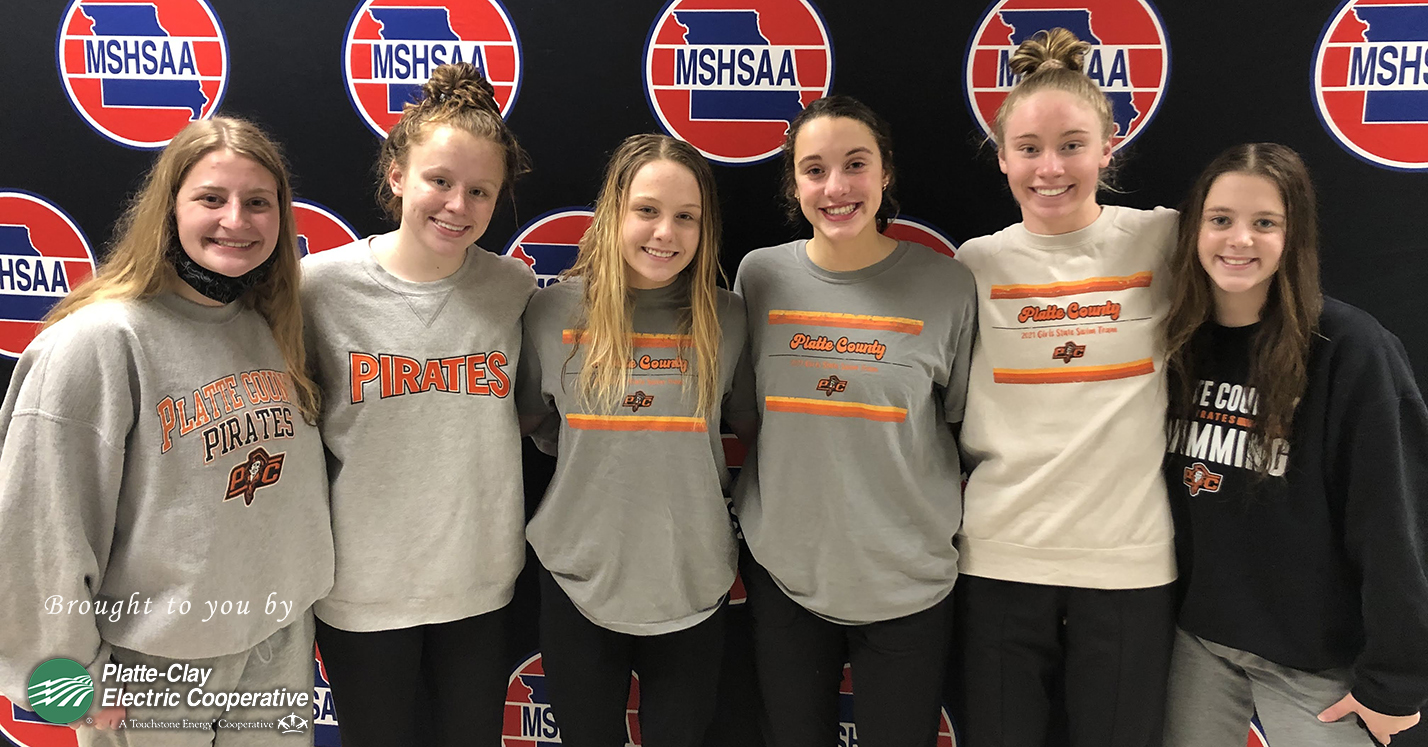 ST. PETERS, Mo. — In a playful and free-spirited display, Platte County swimmers found inspiration in an experienced aquatic character: SpongeBob SquarePants. The night before the Class 1 Missouri State Swimming and Diving Championships included a trip to a local store for seniors Shannon Banark and Ava Jonkman and sophomore Drew DeLay.

The trio purchased a pack of SpongeBob temporary tattoos, and before the competition, each member of Platte County’s team applied one to their right arm. Whether serendipity or a legitimate boost of confidence, the subtle artwork ended up a part of the Pirates’ ninth-place team finish — the best in program history and a continued trend of moving up the standings during the past four years.

“It was just team bonding, but I think it helped a lot,” senior Maddie Klippenstein said with a laugh as the Pirates took plenty of pictures in the hallways inside Rec-Plex following the one-day competition.

Banark further cemented her place as the most successful swimmer in Platte County history with four more medals — two in individual events and two more as part of top-eight relays that set school records at state. The Pirates have gone from 32nd at state in Banark’s freshman year to 23rd to 16th a year ago, setting the stage for a nine-member senior class to lead this year’s unprecedented results.

Platte County racked up 108 team points, posting the highest Class 1 finish for a Kansas City team. The two all-state relays plus Banark, freshman Brooklynn Hays, DeLay and Klippenstein all scoring points in the 100-yard breaststroke were the key. Hays joined Banark as an all-state performer in the event and became the first freshman in program history to medal at state, earning not one but two.

Six swimmers competed for Platte County, and only senior Sophia Zimmerman did not come away with a medal.

“It is way different, there is more team bonding and it is a better environment,” Banark said. “It is very uplifting with all the girls here.”

Outside of Banark, no other member of Platte County had earned a top-eight medal before the weekend. She finished third in the 100 breaststroke and fourth in the 200 individual medley in her two solo races, while the Pirates’ 200 medley relay team of Banark, Klippenstein, Ballou and DeLay placed fourth, and the beefed-up 400 freestyle quartet of Banark, Ballou, DeLay and Hays came in seventh.

“We wanted to medal a couple of relays, and we did that and I can’t believe most of the girls that swam are going home with a medal, with at least one medal,” Platte County coach Marnie Jenkins said. “What an amazing day.”

Platte County arrived at noon for the championships in the first of staggered waves of teams allowed into the facility due to COVID-19 pandemic protocols. The Pirates then waited until 3:30 p.m. for the swimming events in a meet unlike previous versions due to the lack of preliminaries.

There were no ill effects with Platte County starting the meet with a pair of school records and then closing with another.

The 200 medley team came in at full strength thanks to the return of Klippenstein late in the season from a back injury. The Pirates were seeded sixth, but the team of Banark, Klippenstein, Ballou and DeLay set a school record in 1 minute, 52.87 seconds to place fourth.

The previous school record was 1:54.73 set by the same group in the preliminaries of the Suburban Conference Blue Division meet.

Banark, a South Dakota signee, followed that up by placing fourth in the 200 IM in 2:09.23, which bettered her own previous mark of 2:10.11. This also marked the best state finish for her to that point in her career and the best in program history.

That superlative only lasted until later in the day.

Platte County made a big move late in the meet, jumping from 14th in the team standings to ninth after racking up 39 points in the 100-yard breaststroke. Four of the 24 qualifiers in the event were from Platte County, and Banark (third) and Hays (eighth, season-best 1:09.48) earned all-state honors. DeLay (10th, 1:10.41) and Klippenstein (12th, 1:11.46) were honorable mention all-state, adding to those same honors they earned in 2020.

Banark finished in a time of 1:07.16 but entered seeded first at 1:06.26 — not bad for an event she claimed earlier in the season was one of her weakest.

“I didn’t hold my ranks, but that is OK,” Banark said. “I had fun, and I tried my best. That is all that matters.”

DeLay and Hays actually swam in the second heat with Hays earning the last all-state spot, while Banark and Klippenstein were in the third and final heat. Last year, Klippenstein placed ninth and DeLay was 14th in the same event at state.

“You know we don’t work on it that much in practice,” Jenkins said. “So I don’t know why they are so good at it.”

Hays came in 20th in the 50 freestyle for Platte County’s final individual entrant as part of an impressive state debut. The Pirates then closed their state meet with the seventh-place 400 freestyle relay, which only guaranteed its state spot in a last-chance meet the day after conference with Hays, DeLay, Ballou and Banark grouped together in a rare top-tier lineup for the event.

Platte County finished in 3:46.16 to set the school record and break the mark of 3:48.26 the same quartet set in the last-chance meet. Prior to that, the best time for the Pirates in the event was last year at 3:56.20, meaning the school record is now more than 10 seconds lower than it was.

“This is the best Platte County had done in high school history for our school, and we had some relays place in the top eight, which was awesome,” Klippenstein said. “I think this is the most we have gotten as a team ever. It was fun to be a part of it. We’ve never been close to ninth so to come here and leave our mark is something I will not forget.”

Prior to state, Platte County wrapped up a third straight Blue Division conference title. The Pirates wanted to better last year’s finish in the final team standings, and Jenkins set the goal as a top-1o finish.

“I hoped we could and I thought, ‘OK, this is a goal and maybe we will do it,’” she said. “But to accomplish it, it is so cool. This is a remarkable group of young women.

The race was the last for Banark, Klippenstein and Zimmerman, the top pieces from the historic senior class that built Platte County into one of the top small school teams in the state.

“It felt good but I don’t think it sunk in yet,” Banark said of her last race. “It will eventually.”

Klippenstein, who held the school record in the 100 breaststroke until Banark’s late-season surge in the event, now shifts gears to get ready for track and field season, where she will try to become a state qualifier in that sport like she did in cross country in the fall and swimming in the winter.

“I love how this team has grown over the years,” she said. “We added Drew last year and Brooklyn this year and we have Meredith (Ballou). We have a couple fast freshmen you will see next year. It is exciting. It is fun to be around younger high school students. I love it.

“I think we left it on a good note, and I think they will carry it on.”

Jenkins hasn’t quite looked forward to the 2021-22 season, where she will have to replace a pair of four-time state qualifiers in Banark and Klippenstein.

“I can’t even think of that right now,” Jenkins said. “This is one of those ‘once in a lifetime teams’ for me. They are all really close and pushed each other and it has been a great team to coach.”