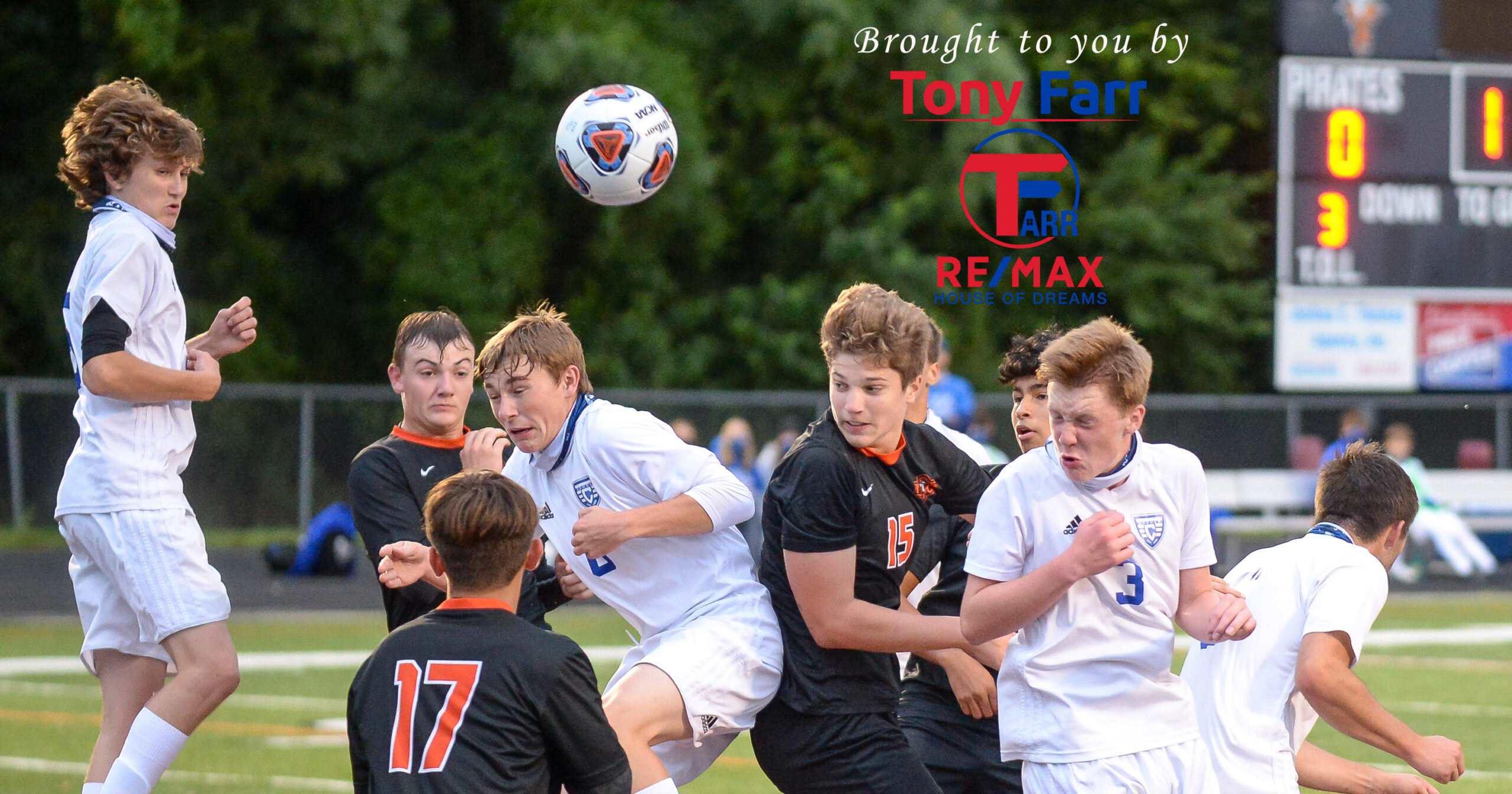 Platte County evened its record Thursday night with a 3-0 victory against St. Joseph Central at Platte County High School. The Pirates scored all three goals in the second half with juniors Nathan Macaluso and Palmer Boekhout striking just after the halftime whistle and senior midfielder Chamberlain Brownsberger closing it out with a late tally.

Coming off a disappointing 3-1 loss to Raytown South, Platte County looked more the part of a returning Class 3 state finalist, controlling possession and dominating chances against the overmatched Indians.

“(Against Raytown South), it was our first time using this formation, but I don’t want to blame it on that,” said Boekhout, who scored his first varsity goal in the 49th minute to put Platte County up 2-0. “We could’ve definitely passed a little more, taken it a little simpler. We were goal hungry, I guess. This game, we kinda did that first half and then we kinda realized we need to go a little slower.”

Platte County (1-1) returns only four starters from last year’s state runnerup, and the nearly the entire backline had to be replaced.

That means junior Isaac Havemeier shifts into central defense along with senior Joey Habel to replace all-staters Grant Allen and Carter Hays, while junior Sawyer Allen returned at left back with junior Spencer Hay on the opposite side. They are tasked with protecting junior goalkeeper Patrick Sullivan, who takes over for all-stater Ian Lang despite being in just his second year playing the sport.

With veteran Platte County coach Ashlyn Brantley putting an emphasis on talent on defense, goalscorers became the biggest unknown for the season. The Pirates didn’t allow a shot on goal in the first half against Central while attempting to build up to a goal on offense.

Twenty minutes in, Platte County senior Kenny Loy had a shot denied 10 minutes in, and sophomore reserve forward Joseph Ibarra had three headers inside the box in the 21st, 28th and 29th minutes but couldn’t steer any on target.

The breakthrough came in the 45th minute with junior Jake Kingery sending in a corner that found Macaluso in the box for a header that he nodded into the lower corner to make it 1-0 Platte County. Four minutes later, Boekhout calmly slotted home a shot to double the advantage.

Down 2-0, Central lost senior goalkeeper Joey Jura after a collision with Loy, who was on a breakaway when Jura slid in to take the ball off his feet. Moments before, Havemeier had forced him into his last save with a deflected, knuckling left-footed shot on a free kick from 32 yards out.

Central actually put together its best chances in the next 15 minutes with a free kick from 30 yards out scooting low and wide left in the 64th minute, and Sullivan denying a point blank shot in the 65th minute to keep the shutout intact.

“This is the most I’ve ever seen a goalkeeper improve,” Boekhout said. “This is his second year of soccer ever, an he’s making great saves and even doing decent (with his) footwork. Can always get better, though.”

With the Indians pushing up, the third goal came in the 76th minute for Platte County. Macaluso hit a right-footed shot from 22 yards out that the goalkeeper deflected out to his left, and Brownsberger calmly tapped the ball into the net one time for his first career goal.

The win felt like a much-needed relief after the opening loss to Raytown South. Platte County lost just twice all of 2019 — the second coming in a double-overtime upset bid against Rockwood Summit in the state final.

“We’re definitely going to have to work as a team more than ever this year,” Boekhout said. “We lost a lot of people, but I think we have a lot of potential.”

The Cardinals scored all three goals in the first half and opened Suburban Conference Blue Division play with an upset of the defending league champions on Tuesday night. Kingery scored Platte County’s lone goal on an assist from Boekhout, and the Pirates were better in the second half after the early struggles.

Raytown South has been a difficult foe for Platte County in recent years with the Cardinals winning two of the last five in addition to a 4-3 overtime loss during last year’s regular season.

“I think everyone was scared their first varsity game, and we have a pretty good amount of freshmen that play,” Boekhout said.