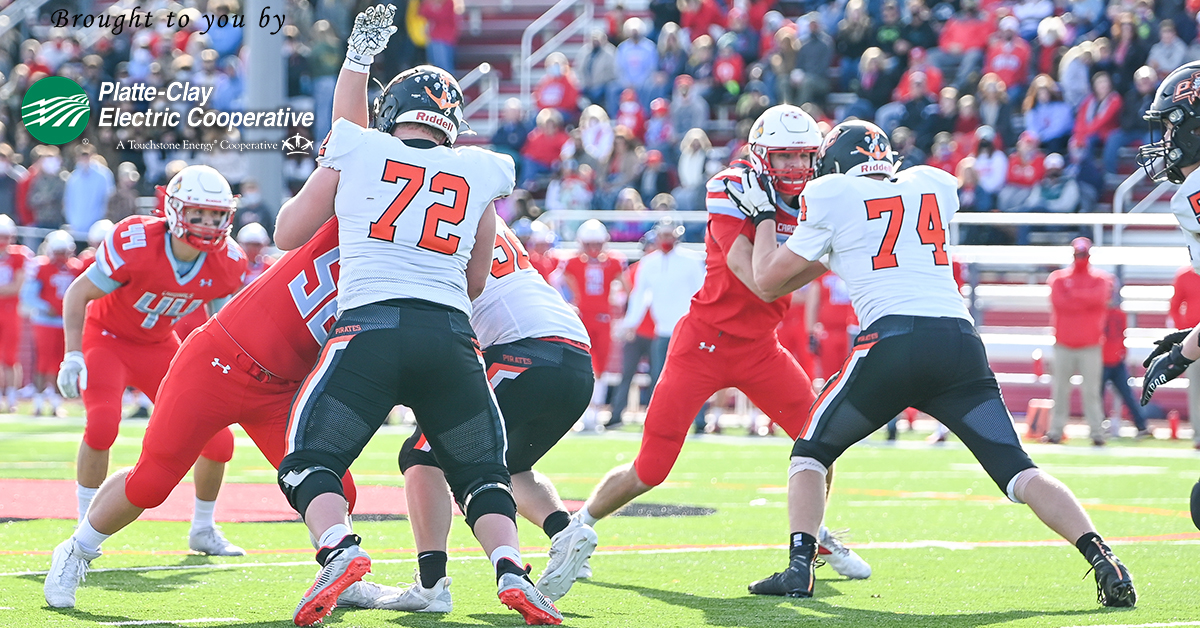 Platte County constructed its offensive line primarily comprised of newcomers for the preseason intrasquad scrimmage with hopes of establishing continuity. Seven days later, changes were already made for Week 1 against Park Hill South.

Turned out the early shifts were preparing Platte County for what would be another season of adjustments for the unit up front.

Trey Butcher came into 2020 as the only player on the roster with starting experience on the offensive line, and yet, he’s started at three different spots. The Pirates have used seven different setups through 13 games as they prepare for the Class 5 Show-Me Bowl this week against Jackson (13-0).

“You know, it’s all about brotherhood here at the offensive line of Platte County, I truly think,” Butcher joked after Saturday’s Class 5 semifinal win over Webb City (11-2). “We help with each other, and we just do what’s best for the team. We aren’t really selfish people. We’ll do whatever it takes to get in this situation like we are right now.”

In recent years, Platte County embraced late-season changes to bolster the offensive line. That includes moving defensive players like Peyton Stoner in 2017 and Kevin Fagan in 2019. The trend continue this year with senior right tackle Colby Guffey unavailable for consecutive postseason games, sending junior Connor Harmon from reserve defensive tackle to starting guard for his first snaps of his life on the offensive line. The Pirates even used a different setup against Webb City than the one deployed in a comeback quarterfinal win over Grain Valley a week earlier.

So how did Platte County (12-1) reach this point while winning nine straight games?

By Week 2, Schillinger went from right guard to left tackle in a straight swap with Nicholson.

Platte County’s offensive line remained in that alignment until Week 4 when Gomel suffered a season-ending knee injury in a loss to North Kansas City. This forced the initial scramble for a position group Utz already knew might be the thinnest on the team.

Butcher went from left guard to center for a week while junior Caleb Kelley made the first of nine straight starts at left guard — the longest current streak of starts in the same spot for any member of the offensive line.

But Butcher only stayed at center for a week and went back to his preseason post of left tackle, while Schillinger started his stint as starting center. Kelley (left guard), Nicholson (right guard) and Guffey (right tackle) also seemingly found permanent spots in what has been the most used starting combination — used in a span of four out of five games starting with a Week 6 win over Ruskin and continuing in Weeks 8 and 9 of the regular season and the Class 5 District 8 semifinal rematch with North Kansas City.

Then came Guffey’s absence with Harmon moving to right guard on 5 hours notice ahead of the Class 5 District 8 championship game against Staley. Nicholson went to right tackle, and the Pirates stayed in that alignment for the next two weeks.

Against Webb City, Schillinger went to the bench with Butcher moving back in to center to provide an anchor against the Cardinals’ talented interior line. Nicholson went back to left tackle for his first start there since Week 1, and Guffey returned at right tackle to play for the first time alongside Harmon.

“For me, I’m just there to really just play where it’s best for the team,” Butcher said. “Really, I don’t think, as a team, we were very scared about the ends, more about the nose guard, so they moved me. I said, ‘Yes sir,’ and we got it done this week.”

Butcher remains the biggest constant. Not counting Week 7 at Winnetonka against the 6-foot-2, 275-pound senior, he will make his 37th consecutive start in Saturday’s state championship game, having played all but a handful of the most important snaps. Butcher played all but the first series against Winnetonka as a penalty for missing a practice, and Nicholson is the only other offensive lineman to match his 13 starts.

There are very few other negatives for Butcher, the quirky and often-exuberant lineman who earned first team All-Suburban Conference Blue Division honors this season.

“(Butcher) does a great job; he’s a good leader,” Utz said. “A good leader is defined by someone who has followers, and they seem to follow him really well. He knows what he’s doing. He backs it up, and it’s nice for him to be able to play in all those different spots.

Bizarrely, Platte County lost the equivalent of six starters from a year ago when counting Fagan’s important late-season contributions while filling in for two other senior guards who rotated a starting spot early in the season.

In addition to the eight players to start on the line, freshman Muyonta Maxwell and junior Jaisyn House also saw time at guard as the Pirates continued to tinker. That means there have been three centers, four tackles and six guards to see time this season. Nicholson earned second team all-conference honors and Guffey made honorable mention in his return to the team after not playing a year ago.

“It’s kind of unbelievable to me,” Butcher said, “because I know from a first-hand standpoint that I’ve been in that situation. And it takes a lot of guts and heart to necessarily do that position and make sure everyone is doing their job right, and they step up properly.”

Impressively, Platte County’s scoring average actually went up this season from 2019’s 24.1 points per game in 15 games to 33.8 in 13 games this season. The Pirates’ average total offense is also nearly identical to 2019 with another slight uptick this year despite tough assignments for the offensive line. This includes a pair of games against North Kansas City, which owns one of the best defensive line’s in the state featuring a trio of Division I recruits.

The biggest difference is senior quarterback Chris Ruhnke averaging 224.8 yards passing per game compared to just under 200 in his junior season. This matches up with the pass blocking strength of a unit that also benefits from Ruhnke’s creativity, mobility and pocket awareness.

Platte County senior running back Cayden Davis goes into the matchup with Jackson at 978 yards rushing after totaling 90 on Saturday against Webb City. He’s on pace to at least come close to last year’s season total of 1,043 despite recording just two 100-yard games. Davis has led the Pirates in rushing all 13 games but was held to under 50 five times despite being the unquestioned No. 1 after splitting snaps with now-graduated Trey Phan in 2019.

Against Jackson this weekend, Platte County will most likely be in one of the seven offensive alignments used so far this season.

“That’s definitely the kind of guy Trey is,” Ruhnke said. “He’ll play anywhere you tell him to.”