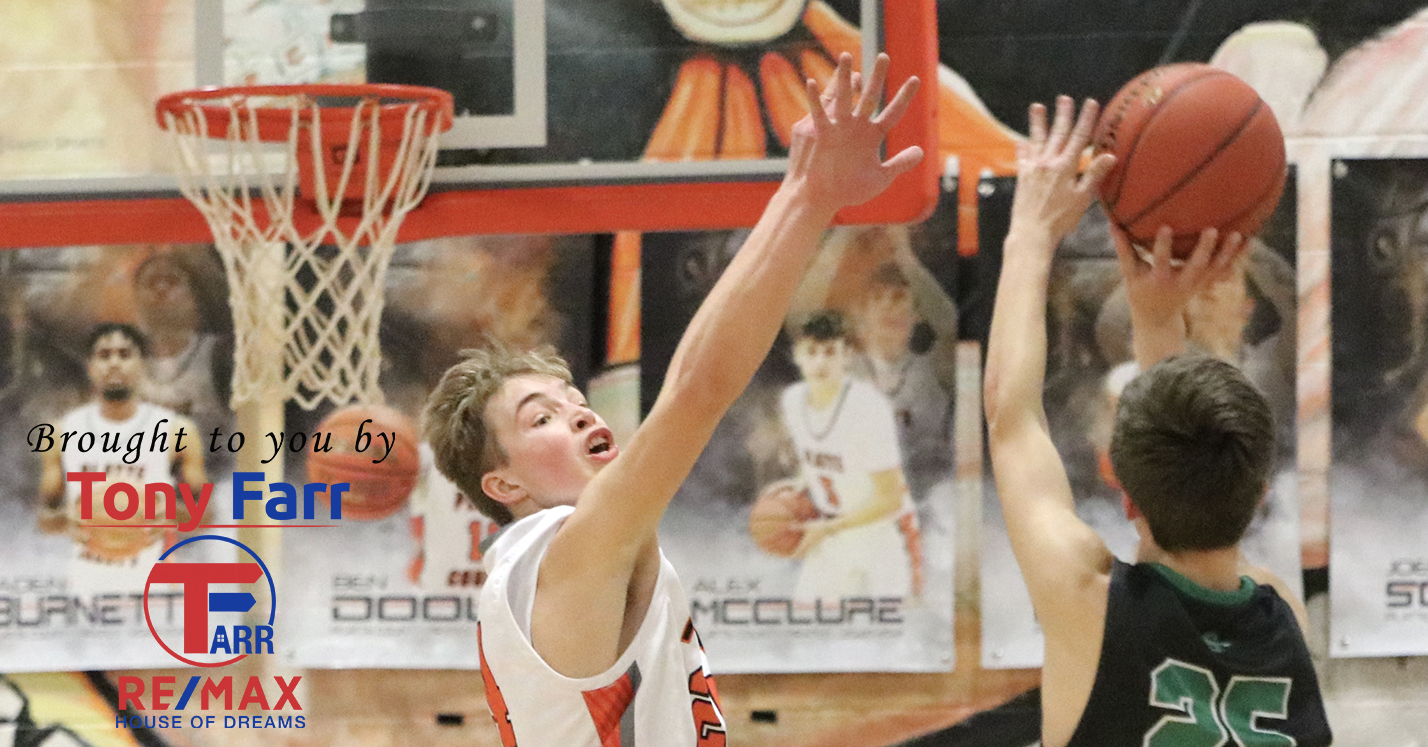 Platte County’s veteran coach knew the Pirates did all they could in their final home game of the regular season. Ben Doole, an energetic reserve senior guard, took the opportunity to splash in a 3-pointer from the left wing in the closing seconds of an emphatic 73-49 win over Smithville on Tuesday night.

The blowout reversed the result of the previous meeting between the two rivals, and Platte County didn’t lack for motivation despite the regular season winding down and another potential Class 5 District 16 matchup between the same teams looming next week.

“They came out really hard last time, and we couldn’t match their intensity right from the start,” Doole said of a rare opportunity to get a shot up in a game, although he doesn’t miss often. “But we came out tonight and put it to them really fast. We’ve got districts coming up so both teams weren’t going 100 percent, but we come out on top and my 3 was just amazing.”

About an hour and a half later and almost 45 minutes south of Platte City, Grandview wrapped up a tight 52-51 upset of rival Ruskin. The combination of results in the two Suburban Conference Blue Division matchups forced a share of the league title.

Platte County and Ruskin finished with identical 9-3 conference records, which included a split of their two matchups. This marks just the second Blue Division title for Platte County in boys basketball since moving from the Midland Empire Conference to the Suburban Conference for the 2008-2009 season. The Pirates last won the league crown 10 years earlier in 2011.

In a packed finish to the conference slate, Platte County went 3-1 in its last four games played in a span of just three games. However, the Pirates’ loss to Ruskin on Friday significantly slimmed the chances of claiming a piece of the league title, and the players were realistic following Tuesday’s win, knowing they needed help to keep Ruskin from winning it outright.

“Playing high school basketball, that would mean a lot, winning a conference championship,” said Platte County senior guard Jaden Burnett, who scored nine points in the win over Smithville. “Obviously, the main goal is to win districts, go to state and win it all. That’s what our mindset is focused on. The big prize is winning state.”

To have any shot, Platte County (19-4) needed to avenge a previous loss to Smithville, which had put the biggest dent in the Pirates’ Blue Division title hopes with an upset win late last month. The Warriors hit nine total 3-pointers in the previous meeting.

This time around, Platte County led from the outset behind five early points from Burnett and pulled away late behind a game-high 21 points from senior forward Joey Schultz and 11 more from senior guard Alex McClure, who hit three key 3-pointers. Late in the first quarter, Schultz converted a three-point play after drawing a foul on an acrobatic layup, and senior reserve guard Daunte Alaiwat added a corner 3 a short while later to push the advantage to double digits at 19-9.

Shortly after, Smithville sophomore Ryker Edwards appeared to injure his elbow when he made contact with the backboard challenging a layup for Alaiwat, who scored all five of his points in the first quarter. Edwards, who scored 18 points in the Warriors’ win over Platte County, did not play the rest of the game and finished with just five points.

The injury changed the complexion of the matchup with the two teams likely to play in a Class 5 District 16 semifinal next week.

“They were a lot different. Absolutely,” Platte County coach Rick Hodge said. “That was one of their players, and it’s unfortunate to have the injury.”

McClure hit 3-pointers on each of Platte County’s first two possessions in the second quarter, quickly stretching the lead to 29-14.

However, Smithville (12-12) immediately came back with a 3-pointer of its own and hit some key shots to stay within striking distance. Schultz buried a 3 late in the second quarter on his way to 13 points in the first half, but the Pirates needed a layup from junior reserve forward Brody Fulk (six points) to go into halftime up 39-28, providing an answer to another 3 from the Warriors.

“I don’t think it was frustrating so much as it was expected,” Hodge said. “That’s what they do. They spread it; they drive it; they kick it; they shoot ’em. You shoot it as much as they shoot it, they’re going to hit some, so you know they’re going to stick some shots, and they did. Yeah, it’s enough to keep them around, and it was enough to beat us the last time we played.”

Schultz scored four of Platte County’s first six points in the second half, and the lead again hit 14 at 45-31 before Smithville senior Brad Schram hit his first and only 3 to close the gap. Schram finished with just nine points after tying his own school record with seven 3-pointers and a game-high 28 points in the first meeting between the two teams.

“Alex did a lot better job staying with him; Alex didn’t lose him very much tonight,” Hodge said of McClure’s defensive assignment. “Alex and Brody did a good job knowing where he was at all times.”

Platte County junior guard Jace Trimble scored six of his nine points in the third quarter. His production included a pair of runout layups, one on an assist from Schultz and the other off of his own steal. McClure added his final 3 in a closing stretch that helped put Smithville down 58-35 going into the fourth quarter. The Warriors wouldn’t have a final push back.

Instead, Platte County junior guard Jarett Mueller scored five of his seven points in the fourth quarter before Hodge lifted his starters and allowed them to enjoy the final moments of a big win that took on added importance thanks to Grandview’s minor upset of Ruskin. The Pirates have already earned the No. 1 seed in the Class 5 District 16 tournament and have a first-round bye before playing the winner between Smithville and Excelsior Springs.

With Excelsior Springs in the middle of another down season, Hodge knows he’s likely to see Smithville for a third time but didn’t worry about showing too much while earning this victory.

“I’ve shown all my cards all season long. They all know all my cards,” Hodge said. “I think the big thing was we shot the ball better from the perimeter, and Joey was a lot bigger person tonight on the inside, which is what we needed and where we needed to go. He gave us a lot in all areas of the scoresheet. We’re happy for it. It’s nice to get the win, and we’ll try to keep getting better.”

Platte County closes the regular season at Belton on Thursday before being off until Tuesday. Smithville and Excelsior Springs play the first round Class 5 District 16 game Saturday.

The Pirates started their busy week of conference games with a comfortable victory at Raytown South on Wednesday night. The game was originally set to be played a week earlier but ended up postponed due to inclement weather.

Raytown South scored just five points in the first quarter and didn’t recover from the slow start. Platte County made eight 3-pointers total, including three from Trimble, two from Mueller and one each from McClure, Alaiwat and Doole. Mueller finished with a team-high 16 points, while Trimble added 12. Ten players scored for the Pirates but Schultz was next with eight points.

Platte County shot just 12 of 22 on free throws, keeping the score from being even more lopsided.

The Eagles earned the season split Friday night on their home court in a matchup that seemingly decided the conference race.

With the win, Ruskin improved to 9-2 in Blue Division play and took a 1½-game lead in the standings with only the game against Grandview remaining. The Eagles had a 21-12 advantage in free throws attempted, and Elijah Corner (14), Joshua Williams (13), Jalen Dunn (10) and London Greer (10) all scored in double figures, while Chinedum Idika added eight in a balanced effort.

Platte County senior Dylan Montes and Schultz both fouled out for Platte County, which trailed 29-26 at halftime. McClure hit five 3-pointers and led the Pirates with 19 points, while Schultz finished with 12 — eight coming from the free throw line.

Only five players scored for Platte County, and Mueller (10 points) and Burnett (eight points) both hit two 3s. The Pirates had 19 total field goals and nine were from beyond the arc.

The Pirates kept hopes for a share of the Blue Division title alive with a road win Saturday. The game had originally been scheduled for Tuesday but was pushed back due to severe cold weather.

Platte County bolted to a 19-5 lead and carried a 26-19 advantage into halftime despite a slow second quarter. McClure sparked the offense with both of his 3s in the third quarter, and Mueller scored nine of his 15 in the fourth quarter after having a 3-pointer in both the second and third quarters.