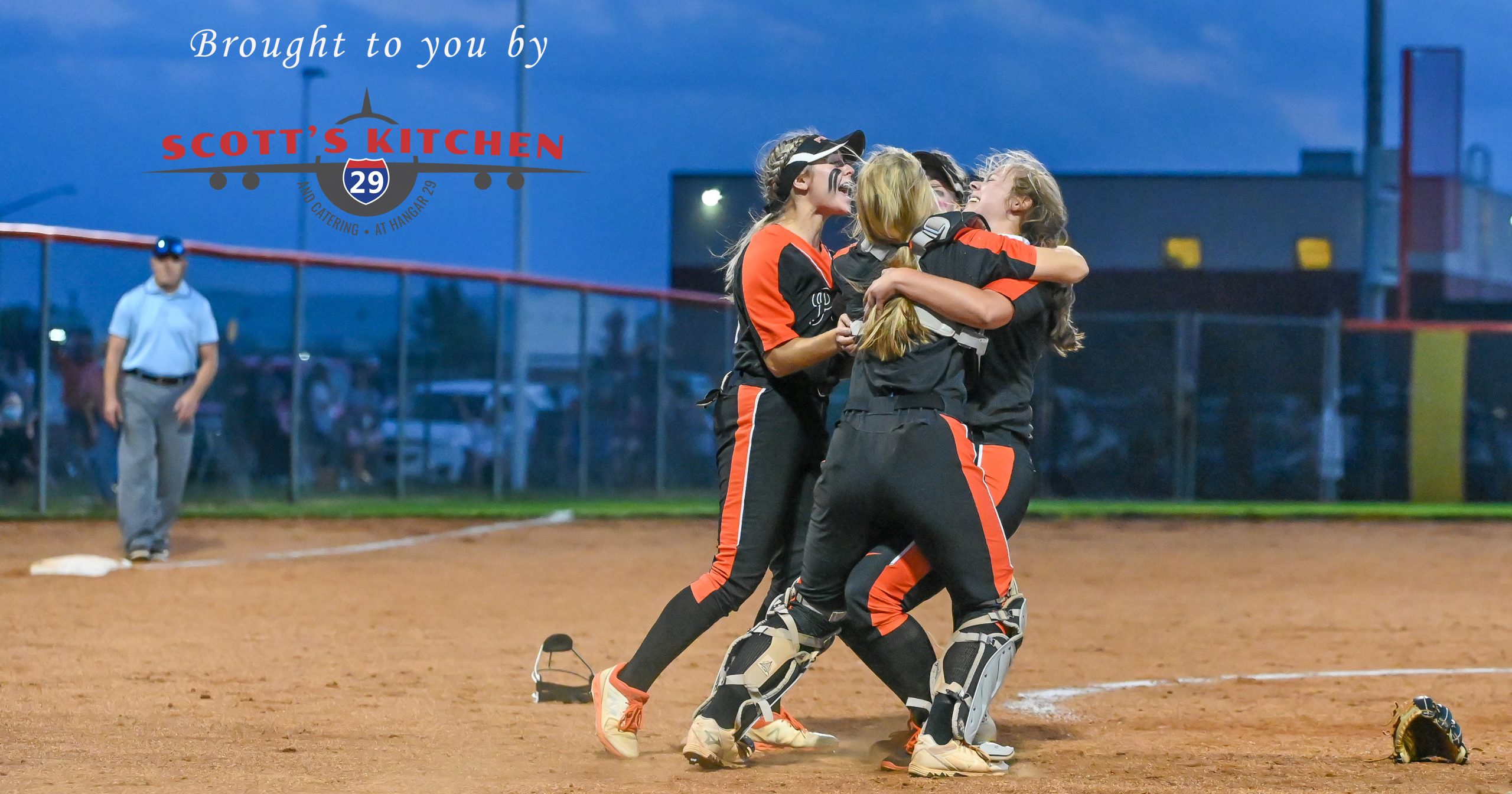 Platte County advances back to state for 1st time since 2014

Platte County found out only hours before Thursday’s Class 4 quarterfinal matchup that senior centerfielder Maddie Carter would be unavailable. That put Reynolds, a sophomore who started much of her freshman season, into the lineup against Grain Valley for the Pirates’ first playoff game since 2014.

Reynolds worked a critical one-out walk in the top of the fifth inning to turn the lineup over to Platte County senior shortstop Halle Magee, who broke a scoreless deadlock with an RBI triple to center field. The Pirates put up three in the frame and went on to a 3-1 victory at Platte County High School.

“We talked all season that every single person plays a big part, but every single person has to do their small part to help us win a game and to keep us successful,” Platte County coach Callie Peoples said. “Abby played varsity about half of the year and she played varsity all last year, so it’s nothing she’s not used to so I was very confident with her going out there. But I knew she’d be a little nervous.

“She came up huge and was on base two out of the three times (she hit), so that’s all we can ask for.”

Platte County (21-1) received another strong performance from senior ace Emma Koeneke, who struck out 10 and didn’t lose her shutout until the bottom of the seventh

inning. The Pirates were without one of their team leaders but overcame the potential adversity to reach the state semifinals for the fifth time in program history and the first since a state runner-up finish in Class 3 back in 2014.

With Carter on their mind, Koeneke, Magee and fellow seniors Hayden Humes, Grace Heater and Ana Cesaro took advantage of their opportunity. Platte County had lost in district title games four of the past five seasons before knocking off Smithville 4-2 in last week’s Class 4 District 8 title game.

“It’s exciting. We’ve fallen short in districts three years in a row, which was disappointing, but we’re taking this senior year and making it as memorable as we can, you know? We just want to win it all,” Koeneke said.

Grain Valley (25-5) found limited opportunities to score against Koeneke, who retired nine straight to start the game — the first five by strikeout.

In the bottom of the fourth, Koeneke struck out back-to-back batters to strand Grain Valley sophomore Cameryn Brown at third base after she started the inning with the team’s first hit — a single. The Eagles led off the sixth with another single and threatened to score more than once. Pirates second baseman Demi Riechers dove to stop a ground ball that prevented an RBI single with two outs, and after the infield hit, Cesaro made a stop at third base and completed the throw to first for the third out that stranded two more.

Platte County went into the seventh still up 3-0, but Avery Huffman hit a leadoff triple. She eventually scored on a one-out groundout, and the Eagles managed to bring the potential winning run to the plate.

Emma Jane Ogle walked on a full count when Koeneke thought she had ended the game with a strikeout, and Riley Downey followed with a two-out single. Koeneke then struck out Mackenzie Keller to end the game.

“It is what it is, I guess. We kept fighting. It was nerve-racking, but I knew we’d pull it out,” Koeneke said. “A little disappointed (to lose the shutout), but I’m just glad we won and we’re going to semis now.”

While Grain Valley waited until late to produce offense, Platte County produced runners in six of seven innings but only scored in one. The Pirates stranded two in the first and one in scoring position in the third and lost two runners on the basepaths in the second and another in the fourth.

In the top of the fifth, Platte County sophomore designated hitter Jules Knudsen reached on an error to lead off but was immediately thrown out at second trying to advance.

“We’re definitely going to be working on some baserunning tomorrow at practice,” Peoples said. “but we have always taught our girls to be aggressive on baserunning so I’d almost rather that than them be too safe — especially early in the game like that. But I knew from the beginning of the game if we kept getting baserunners on like we kept doing every single inning that good things were going to happen.”

With a potential bunt opportunity lost, Reynolds came to the plate and worked a five-pitch walk against Grain Valley sophomore starter Hailey Hemme. Halle then came up and took the first pitch the opposite way with Reynolds running on contact and able to score easily from first and put Platte County up 1-0.

“I felt the sweet spot when I hit it,” said Magee, who has six home runs this season out of the leadoff spot after hitting just one other in her career. “We needed to fight through adversity tonight, and that’s what we did.”

Platte County sophomore Avery Webster then made it 2-0 on a grounder to third base. She reached on a throwing error, and Magee scored despite protests from Grain Valley coach Garrett Ogle that the third baseman tagged Magee out off the base before trying to throw to first.

Webster moved to second on the throwing error and importantly went to third base on a dropped third strike for the inning’s second out.

Platte County sophomore TK Lawson — the hero of the district title game win over Smithville with a three-run home run — then singled to left field to score Webster and increase the lead to 3-0.

“It was very rewarding,” Koeneke said. “We had been getting runners on the entire game. We just know what we had to do was poke some through, and that’s exactly what we did.”

Magee doubled and moved to third on a groundout in the top of the seventh but couldn’t score.

Koeneke made the 3-0 lead stand up despite the unexpected tense moments in the final half inning, and Platte County celebrated more history. The Pirates had been up in Class 4 in recent seasons, but for this fall, the state added an additional class.

Platte County is now in Class 4 out of five, and with the top two classes now only having eight districts meant just the one win was needed to guarantee the Pirates a state trophy. The senior class that waited for one opportunity now wants to make the most of it — especially with Carter’s season unofficially over.

Carter told Peoples that she’s glad the rest of the team still has the chance to play, and surely, Platte County’s entire roster will want to help make her a state champion.

“Of course there’s a sigh of relief because we wanted to go to state, but there’s also anxiety because we’re not done yet,” Magee said.