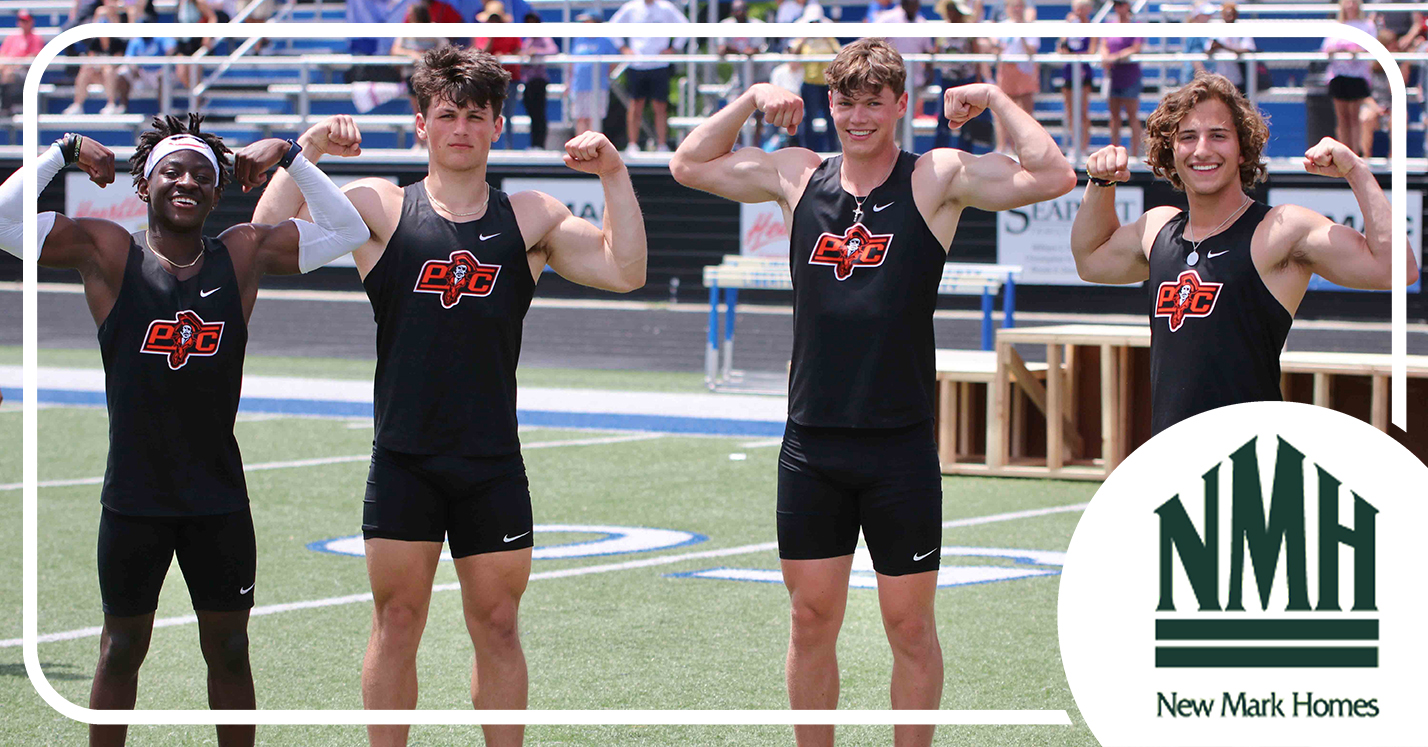 LIBERTY, Mo. — The competition looked much different and half the faces changed, but the emotions should have felt familiar.

Injuries have limited Salzman to pole vaulting duty after running the lead leg most of last year, while Smith-Dean is not currently on the roster.

“We finally figured out this was the team we were going head into districts with,” said Scott, who take the handoff from Walls’ opening leg. “We had a good week of practice — the most we’ve practiced handoffs all year — to make sure everything was clean, and obviously, we performed pretty well.

“I remember the excitement from last year after breaking the first school record with another group of guys. The excitement was the same as last year — all smiles.”

Shuffling the lineup all year, Platte County finally found the right combination to go sub-43 for the first time and keep the season alive. The Pirates were moved up from Class 4 to the state’s largest division for the first time this season, creating unprecedented challenges in trying to earn repeat berths to the Missouri State Track and Field Championships.

Scott handed off to Rhoden to run the final curve, and Sewankambo, the senior anchor headed to run Division I at UMKC, then closed the gap in the final 100, leaning at the line and nearly catching second-place Liberty North (42.99). Park Hill won the race in 42.65, and incidentally, Walls ran on the Trojans’ Class 5 state medalist 4×100 a year ago before transferring north.

Platte County needed the record-setting performance to make the field for this weekend’s Class 5 Sectional 4 meet at Lee’s Summit North High School and will likely need a similar effort to advance to state. The top four in each event from Districts 7 and 8 will compete with the top four moving on. The Pirates went a year ago but dropped the baton in preliminaries with Sewankambo running the baton across the line late in what ended up a disqualification anyway.

A return trip — and really the hopes for the entire team — were altered when Class 5 became a reality early this season.

“We were about three weeks in before we even knew we were Class 5,” Scott said of a team with high expectations after finding out about the new assignment. “We had first place in our minds after last year. We knew we were going to be up there and have a chance and shot at it, but once we heard the Class 5 news, our energy and excitement kind of dropped down and dipped. After this race today, I think we know we still have a shot of chasing something.”

The 4×100 record came in the middle of a memorable day for Sewankambo, who emerged and flashed potential last year as a previously unknown junior. He qualified for the finals of the open 100 in the morning with a personal-best of 11.02 but went into the finals seeded fifth as the fastest runnerup in the four heats.

Running out of lane seven about an hour later, Sewankambo broke 11 seconds for the first time in his career at 10.88, and after a review of the finish, he ended up as the unexpected District 8 champion. North Kansas City senior Keilan Powell came in second at 10.89, while Oak Park junior Tory Lanham (10.93) and Liberty sophomore Dominic Revels (10.94) were all within .06 of Sewankambo.

Sewankambo did not reach state in the open 100 as a junior in Class 4 but had shown glimpses of this type of potential. However, he came back from a disappointing and unexpected sixth-place finish in the event a little over a week earlier in the Suburban Conference Blue Division Championships.

“I think I was more excited with him hitting a 10.8 than he was,” said Scott, who finished fourth in his 100 preliminary in a personal-best 11.40 to take the eighth and final spot in the finals where he placed eighth at 11.42.

In addition to his sprint showings, Sewankambo also placed third in the long jump at 6.57 meters to advance to sectionals in that event, as well. He was a little less than a quarter of a meter off his personal best from earlier in the year at the Liberty North Invitational (6.78 meters).

Sewankambo’s triple highlighted an otherwise challenging day for Platte County, which finished sixth out of 10 teams in the final team standings with 65 points. The Pirates were 12 behind fifth-place Park Hill South and 28 back of Staley in fourth.

Platte County senior Chandler Steinmeir ended up as the only other Sectional 4 qualifier. He ran just his third 300-meter hurdles race of the season after missing the early part of the season.

Times were overall slow in the event with Park Hill senior PJ Caldwell first at 41.50, while Steinmeier ran a comfortable third at 41.84 and and nearly caught Park Hill senior Will Bushman (41.82) for second at the line. Steinmeir’s personal-best in the event came at the 2021 Gary Parker Invitational (40.05), and he knows he might need to finally hit the 39s to earn his first career state berth.

“I’ve got to run quick,” Steinmeir said. “I’ve got to up my game, step up practice this week and see what we can come out with.”

Injuries also kept Steinmeir out of the recent conference meet, and Platte County coach Jerod Smith kept him out of the 110 hurdles and tried to use him to bolster relay lineups. The Pirates didn’t get the results wanted with both the 4×200 of Sewankambo, Scott, Rhoden and Steinmeier and the 4×400 of Steinmeir, sophomore Gavin Jenks, junior Tristan Magnuson and sophomore Conner Currence both coming in sixth place and off the pace.

Now, Steinmeir knows he only has one guaranteed race left and a final chance to make state after disappointment a year ago in his Sectional 4 performance.

“I thought (I would be behind),” he said. “When I wasn’t competing, I was telling myself there would be a lot of catching up to do. Once I came out and saw my first 300 time and my first 110 time and seeing how I felt out there, I wasn’t as far behind as I thought. I like the 110s, but I’m happy I got out of them to not risk an injury. And it’s not my best race so I was happy to be able to focus on some relays which are what I really enjoy.”

Rhoden, a Class 4 District 8 long jump champion a year ago, received a reprieve through the 4×100 qualification. He also made the finals in long jump but placed seventh.

However, Platte County saw careers end for returning state qualifying seniors Andrew Early (3,200, 4×800) and Jace Trimble (4×800). Nagging injury kept Trimble out of the 4×800, and the quartet of Early, Currence, sophomore Kade Meinke and junior Ryan McCoy came in fifth to start the day.

Early joined the state-bound 4×800 at Sectional 4 last year, running an anchor leg to help push the Pirates into the season’s final weekend. McCoy also ran a leg at state as a late substitution, but a season-best of 8:23.06 was not enough on Saturday.

Signed to run at Pitt State, Early also competed in the 1,600 on a muggy, hot afternoon tough on the distance runners. He went to the lead for the first three laps but faded in the final 200 meters to a sixth-place finish at 4:39.10. He would have needed to better his personal-best from 10 days earlier at conference just to make the sectional field and ended up about 4 seconds slower but with the second-best time in the event for his career.

Early then scratched out of the 3,200, making the 1,600 the final run of an accomplished career of development from novice freshman to senior team leader.

Platte County sophomore Andrew Johnson went on to show well in the 3,200, posting a personal-best 10:10.23 to better his previous mark from the early-season Darwin Rold Invitational. He ran in the top pack of six runners the entire race but did not have the late surge to stay with the leaders, who all came in at 10 minutes or under.

Currence, who came out for track for the first time, saw his promising season end in a difficult 800 field. He ran limited races this year but showed immense potential from the outset but came in at 2:05.02 for sixth place, just back from a tightly bunched top five. Not in the 4×800, Trimble ran an open 800 for the first time this year in an injury-plagued season and turned in a gutsy career-best 2:06.74, having never previously come in below 2:09. He placed eighth.

While still an alternate for the 4×100, Salzman almost made a surprise trip to sectionals in pole vault. He cleared a career-best 3.50 meters after having previously gone 3.20 meters three different times over the past two years. This marked only his third competition of the season, and he didn’t make his opening height at conference in his most recent effort.

Platte County junior Cameron Wolfe came in fifth in the discus with an effort of 42.45 meters and was about 2 1/2 meters out of the fourth and final sectional qualifying spot. He did make the finals of the 200 with a personal-best 23.49 in preliminaries but then scratched out of the final, hoping to advance in discus and not wanting to expend the energy in the sprint race that overlapped with his throws.