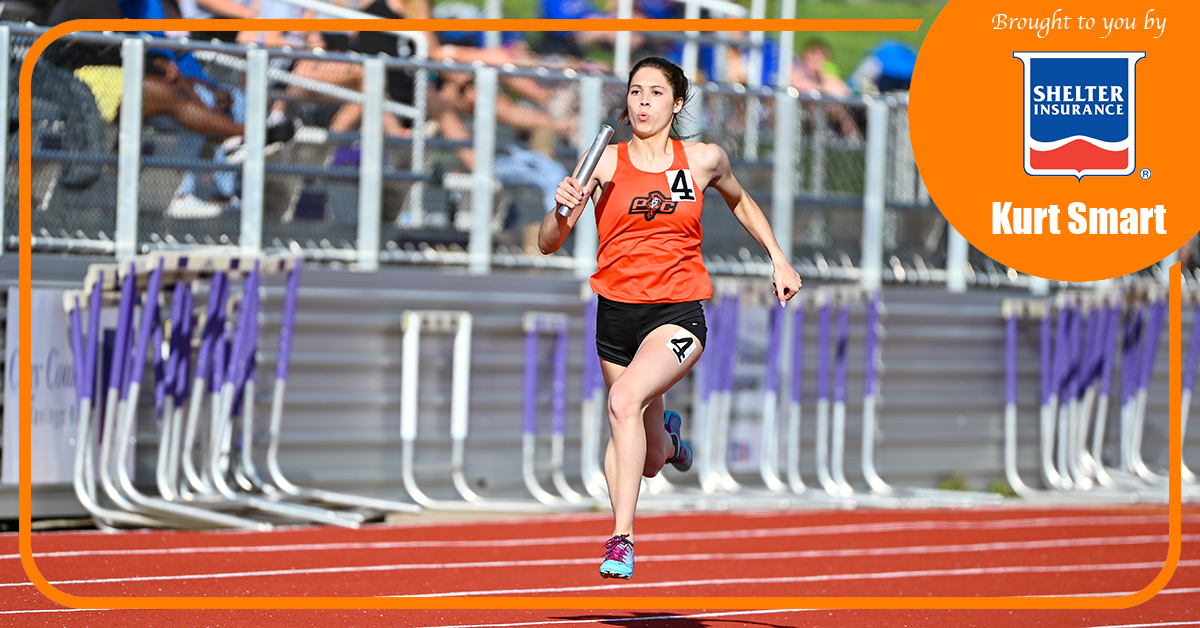 Platte County’s high-end talent along with depth continued to show during the Gary Parker Invitational on Wednesday in Blue Springs. The Pirates didn’t have any individual victories but piled up 83 points and finished fourth out of 14 teams in a competitive field with only Class 5 teams Rock Bridge, Blue Springs and Blue Springs South in front of them. 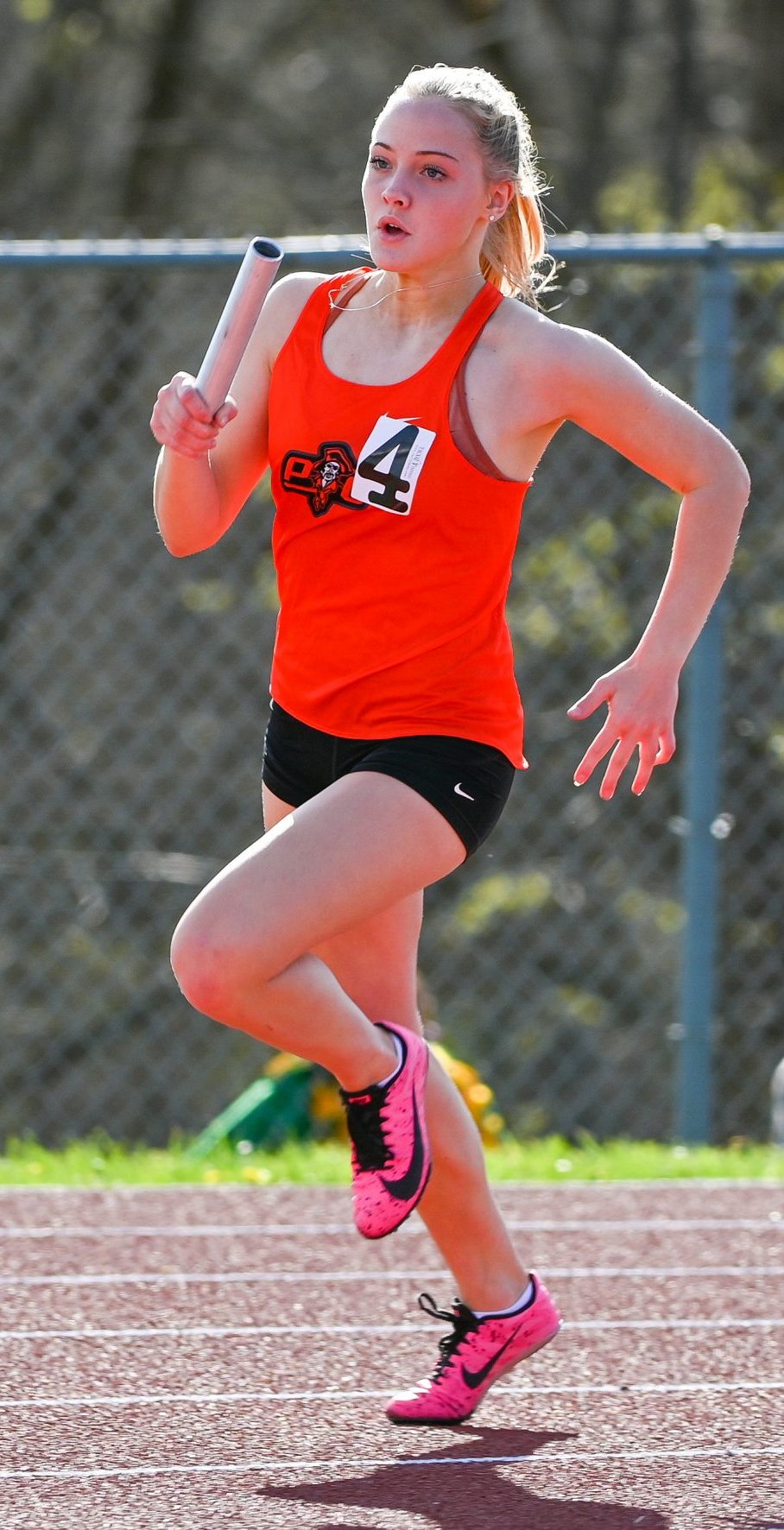 There were multiple runnerup finishes, starting with the longest relay.

Platte County seniors Aly Anderson, Bryn McGehe and Jenna Jurgensmeyer and freshman Sisely Mitchell came in second at 9 minutes, 53.61 seconds behind Blue Springs South, and the Pirates are just about 12 seconds off of the school record set at the 2017 Class 4 Missouri State Track and Field Championships.

Anderson also placed fourth in the 800 with a career-best 2:28.19, giving the Pirates even more options in that event with McGehe a previous state qualifier and Jurgensmeyer excelling so far this year.

Platte County placed second in the 4×200 and third in the 4×400 for critical team points. Individuals in those events were not listed in official results.

A sophomore in her first varsity season due to the COVID-19 pandemic wiping out 2020, Pickett placed second in the high jump at 1.58 meters and then added a strong fifth-place showing in the long jump at 4.97 meters. Sullivan, a junior transfer from Park Hill South, actually tied for second with senior teammate Abbie Schwieder in the pole vault at 3.51 meters. This matched the school record Schwieder set earlier this season just days after Schwieder had reset the mark at 3.53 meters in a meet at Kearney.

The pair continued to finish behind Liberty sophomore phenom Rachel Homoly, but Sullivan took the runnerup finish this time based on tiebreakers.

Platte County sophomore Meah Salzman placed third in both hurdle events, posting a time of 16.91 in the 100s and 48.51 in the 300s. Haley Luna, a senior and top returning state medalist for the Pirates, finished sixth in the 400 at 1:01.87 as she looks to lower her times back under a minute where she was at during the stretch run of her standout sophomore season.

Platte County went above and beyond the competition to win the team title Friday in a rain-delayed meet at Kearney High School.

Three 1-2 finishes in the high jump, long jump and pole vault were big keys in racking up 222 team points to finish 70 clear of runnerup Kearney and 73 in front of Smithville. St. Pius X, Park Hill South and Excelsior Springs were the other three teams competing.

Pickett won both the high jump at 1.55 meters and long jump at 5.00 meters. She finished in front of sophomore teammate Madison Hoyt in the high jump (1.50 meters) and bettered Minter in the long jump (4.77 meters).

Schwieder and Sullivan continued to push each other in the pole vault. For the first time this year, Schwieder placed first at a meet, clearing 3.53 meters and bettering the school record she set earlier this season at 3.51 meters. This marked the third time she has set the school record in her career, going from 3.07 meters a sophomore to 3.51 meters in her first competition this season and 3.53 meters at Kearney.

Overall, Platte County won five individual titles and took first in three of four relays. Luna narrowly edged Kearney sophomore Jadyn Barnes in the 400-meter for one of the Pirates’ two on-track victories. Luna, a two-time Class 4 Missouri State Track and Field Championships medalist in the event, finished in 1:01.55 to win by just .02 of a second. Molly McBratney, a Platte County junior, placed third in the event.

However, Platte County took gold in both sprint relays and the mid-distance relay with Kearney second in two of the three.

Platte County’s 4×100 team of seniors Zaya Dove and Emma Seckinger and sophomores Salzman and Hannah Mand finished in 51.82 to beat the Bulldogs by almost a full second. The Pirates’ 4×200 Luna, Schwieder, McBratney and Salzman were solid in posting a 1:48.76 — nearly a second and a half faster than Kearney.

In the 4×400, Schwieder, Anderson, McGehe and Mitchell beat St. Pius X to the line despite running without Luna on the anchor. Members of those relays to medal in individual events included Dove (third, 100 hurdles) and Salzman (second, 300 hurdles).

Platte County’s 4×800 came in second to Smithville in the 4×800 in what will likely be an intriguing rivalry in the event all season. McGehe, Anderson, Mitchell and Jurgensmeyer posted a 10:08.96 but finished nearly 2 seconds back of the Warriors in an uncommonly close finish in the longest relay at a small meet.

McGehe did not run in the open 800, and Jurgensmeyer still made sure Platte County won the event in 2:33.36. The Pirates also added a medal in the 3,200 with senior Taylor Giger making her season debut and placing third (13:03.32).

Platte County’s final medal came from sophomore Jules Knudsen in the javelin (second, 30.02 meters). She also placed fourth in the discus. The Pirates returned to Kearney for the Kearney Throwers Meet on Monday but did not have any top-three finishers.

NOTE — An earlier version of this story indicated Maya Sullivan and Abbie Schwieder shared the school record in the pole vault. However, results from the meet at Kearney were entered incorrectly, meaning Schwieder had set a new record and still holds the mark.