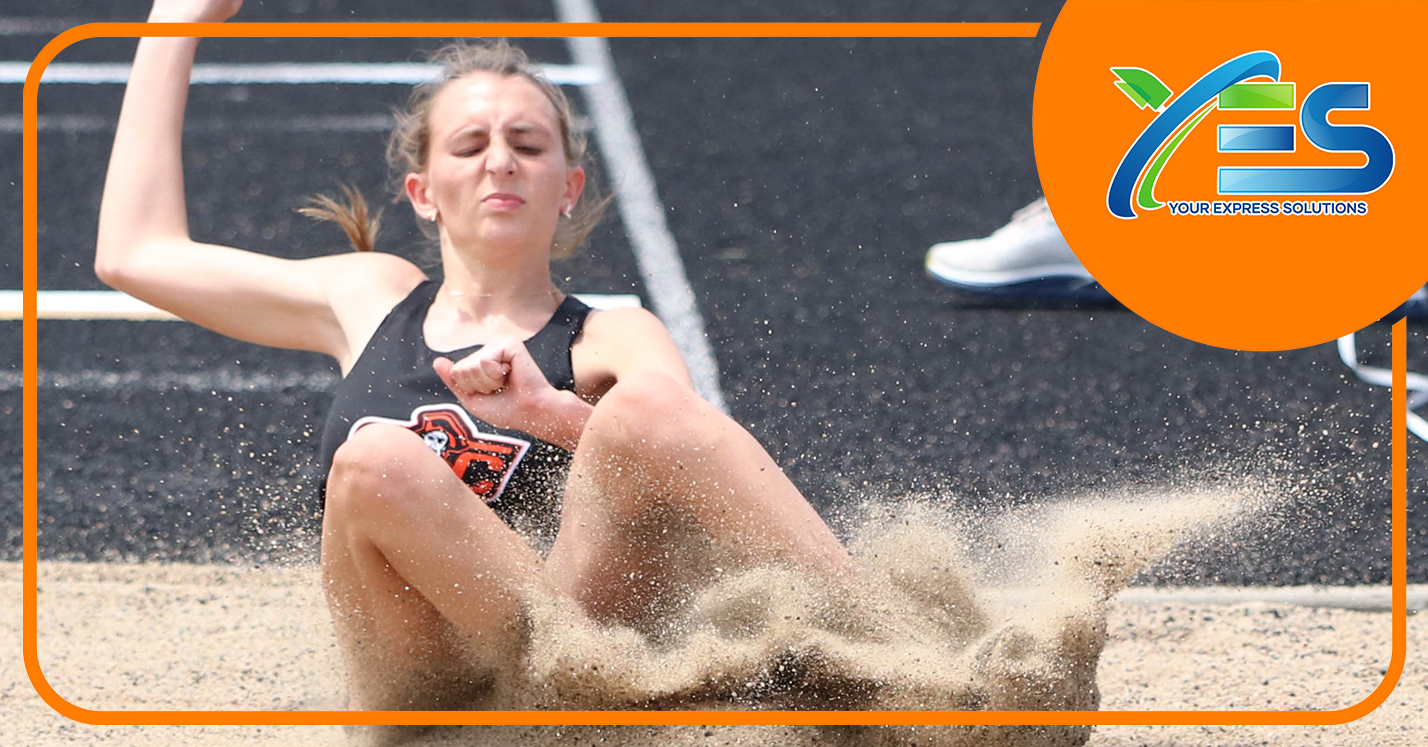 LIBERTY, Mo. — Reese Pickett opened her Saturday on the proverbial right foot in the triple jump and concluded literally jumping off an ailing left ankle in the high jump.

In between, Platte County’s star junior endured a frequently delayed long jump competition where she came up injured on her next-to-last of six attempts. The final results ended up being a pair of Class 5 District 8 titles and qualification in all three events for this Saturday’s Sectional 4 competition at Lee’s Summit North.

Pickett won both the triple jump and long jump, and with the ailing left ankle, holding on to place fourth in the high jump.

Moved up to the state’s largest classification for the first time in program history, Platte County actually won 4 of 19 events Saturday at Liberty High School with sophomore Sisely Mitchell also pulling a double in the 1,600- and 3,200-meter runs. The Pirates accrued 90 points and finished third in the final team standings behind champion Liberty (137) and runnerup Liberty North (130).

Platte County entered the season as the defending Class 4 District 8 champions, which eventually produced a fourth-place finish in the Class 4 Missouri State Track and Field Championships for the first team trophy in program history. The assignment changed with the bump to Class 5, but the Pirates still showed very well in one of the state’s toughest fields for this postseason round.

“I think we’re one of the smallest Class 5 schools so it’s really impressive that we have such amazing athletes that can qualify,” Pickett said. “This is not an easy meet. There’s really good athletes here, so I’m very proud of everyone who has done well today — even those that didn’t qualify. Everybody did really well today.”

Starting off early in the morning, Pickett continued to show her potential in a new discipline. She entered as the No. 2 seed in the triple jump thanks to the near-Platte County record mark she set in her very first competition in the event to open the season.

Pickett ended up with the victory thanks to an effort of 10.75 meters, just off her career-best of 10.88 and again close to Chandrika Brewton’s school record of 10.91 meters from 2008.

Due to overlapping events for competitors and the use of available rest time, the long jump competition stretched from the late morning to the early afternoon — the only field event to experience repeated and intermittent delays.

Pickett didn’t even have a top-six qualifying mark in the event yet ended up with the victory at a season-best 5.08 meters. Only two jumpers ended up going longer than 5 meters, when six entered with a jump better than that on the season. Due to the late finish, Pickett went straight to the high jump pit for warmups with a taped left ankle.

Coming up short of her usual heights, Pickett cleared 1.47 meters and claimed the fourth and final qualifying spot for Sectional 4 by virtue of a fewer total misses tiebreaker. She will again have a busy slate this weekend but will have only four attempts in the long and triple jump, and the reduction from six in each at districts should give her a better opportunity to be fresh for all four events.

“Getting fourth when my ankle hurts, and I’m really tired is good,” Pickett said.

Pickett will be looking to return to state in the long jump and high jump. Incidentally in her debut a year ago, she medaled in Class 4 in the latter and not the former. She didn’t even compete in triple jump until her junior year and now might have her best shot to advance to state in that event this time around.

“The goal is definitely to qualify in everything I can, but I’m just going to take it as another meet and not put too much pressure on myself to do anything I haven’t been doing,” Pickett said.

Platte County’s field events continued to shine with defending Class 4 pole vault state champion Maya Sullivan finishing a comfortable third in the event Saturday at 3.14 meters. Her competition have been limited this season due to a concussion suffered in the first meet back in late March and still has not approached her personal-bests nor Abbie Schwieder’s school record set a year ago.

Sullivan briefly held that record as a junior before her teammate passed her back. The Pirates’ vaulting duo eventually finished 1-2 at state and keyed the team’s historic finish.

While Sullivan and Pickett have significant postseason experience in individual events, Mitchell again flashed her rapid development in long-distance events. She gave up hockey in the fall to focus on cross country and earned Class 4 all-state honors in her debut season.

The momentum carried over to the spring with an increased focus on the 1,600 and 3,200 compared to more opportunities in the 400 and 800 as a sophomore.

Mitchell opened Saturday running on Platte County’s 4×800 with fellow sophomores Julia Greco, Emma Reed and Carmen Gentilia, but the Pirates throttled back her leg after fading out of contention for a sectional spot. Then came the need to refocus for 12 more laps between the 1,600 and 3,200.

“Every lap, I just remind myself I can do all things through Christ, who gives me strength. That’s just what I tell myself every lap around the track because to go around 14, that’s no joke,” said Mitchell, who ran a leg of the 4×800 last year and earned all-state honors with three now-graduated seniors. “I think I handle my nerves well, but I blur out all the other races and just go one at a time.”

In the 1,600, Mitchell ran in the front pack for three-plus laps before making a move to the front and ultimately finishing in 5:25.13 for a 2-second victory over Park Hill sophomore Natalie Gerdes (5:27.13). Mitchell was just off of her career-best from the Suburban Conference Blue Division Championships just 10 days earlier (5:22.09).

Mitchell then kept her spot in the 3,200 field and again ran as part of a breakaway quartet and again bided her time before moving to the lead late. In muggy, hot conditions later in the afternoon, times were well off the norm, and she won in 12:13.35 with Liberty North sophomore Marissa Roberts next at 12:17.64. They ended up as the clear 1-2 in the event with Mitchell taking a somewhat surprising second individual title.

While clearly talented enough to run with most in the state, Mitchell also continues to hone her race strategy in both events and admittedly continues to refine that while knowing that could lead to a drastic cut in times at some point.

“I do think I’ve had to figure it out,” Mitchell said. “Because all of my (1,600s) have had different splits each lap. Some my first lap is super slow and my last is super fast, so we’re just trying to figure out what works best. You always hope so. We can never know until it’s done, but I hope.”

Platte County’s 4×800 relay ended up the only one of four to not advance to Sectional 4, thanks to unique availability from senior soccer-first athletes Riley Smith and Triton Davey. A returning state qualifier in the 100 and two sprint relays, Smith ran on the 4×100, 4×200 and 4×400, while Davey — a first-year runner — took a leg on the latter two.

Smith and Davey actually bypassed playing in Platte County’s dominant Class 3 District 8 first round victory over Winnetonka that afternoon to bolster the lineups. They will not have a conflict for this Saturday and can now push for state opportunities in both sports.

In the 4×200, Platte County junior Hannah Mand and Smith pushed the Pirates to an early lead, but an awkward handoff to Davey slowed them. However, they recovered with senior Molly McBratney as the anchor to take second at 1:46.79, setting a season-but by nearly 4 full seconds.

Smith, Mand and freshmen Makayla Turner and Payton Stadel ran the 4×100 for Platte County and came in third at 50.94, just .06 behind Liberty North for second. The Pirates were also close to last year’s school-record of 50.66 set by Smith, Mand, graduated senior Zaya Dove and junior Meah Salzman, who is no longer on the roster.

That left the question mark of a new lineup in the 4×400.

Davey took leadoff duties with Smith on the second leg, and Platte County sat in fifth when Mand handed to McBratney for the final lap. McBratney, who had just missed a Sectional berth in the open 400 earlier in the meet, turned in a predictably solid final lap. She showed off her robotically consistent pace and easily bypassed Oak Park’s anchor.

Platte County came in at 4:17.36 and was well back of the top three but will hope to show more improvement after using this lineup for the first time. The Pirates entered with a season-best of 4:19.26.

McBratney could be the key, now down to just two relays at Sectional 4. She turned in a season- and career-best in the 400 at 1:01.47 and came up just .08 of a second out of fourth in a gutsy conclusion to her career in individual events. Those also ended up being key points in the Pirates’ team effort that resulted in a third-place finish.

Ava Filger, a sophomore, ran 17.01 in the 100 hurdle preliminaries to qualify fifth, and after a second extremely close call, she finally went sub-17 in the finals and held seed with a fifth-place finish. Stadel ran the 300 hurdles for just the third time this season and placed sixth in 48.82, a little over a second out of fourth, with Filger right behind her in seventh at 49.72.

Stadel went under 50 seconds for the first time, while Filger did so for just the second time.