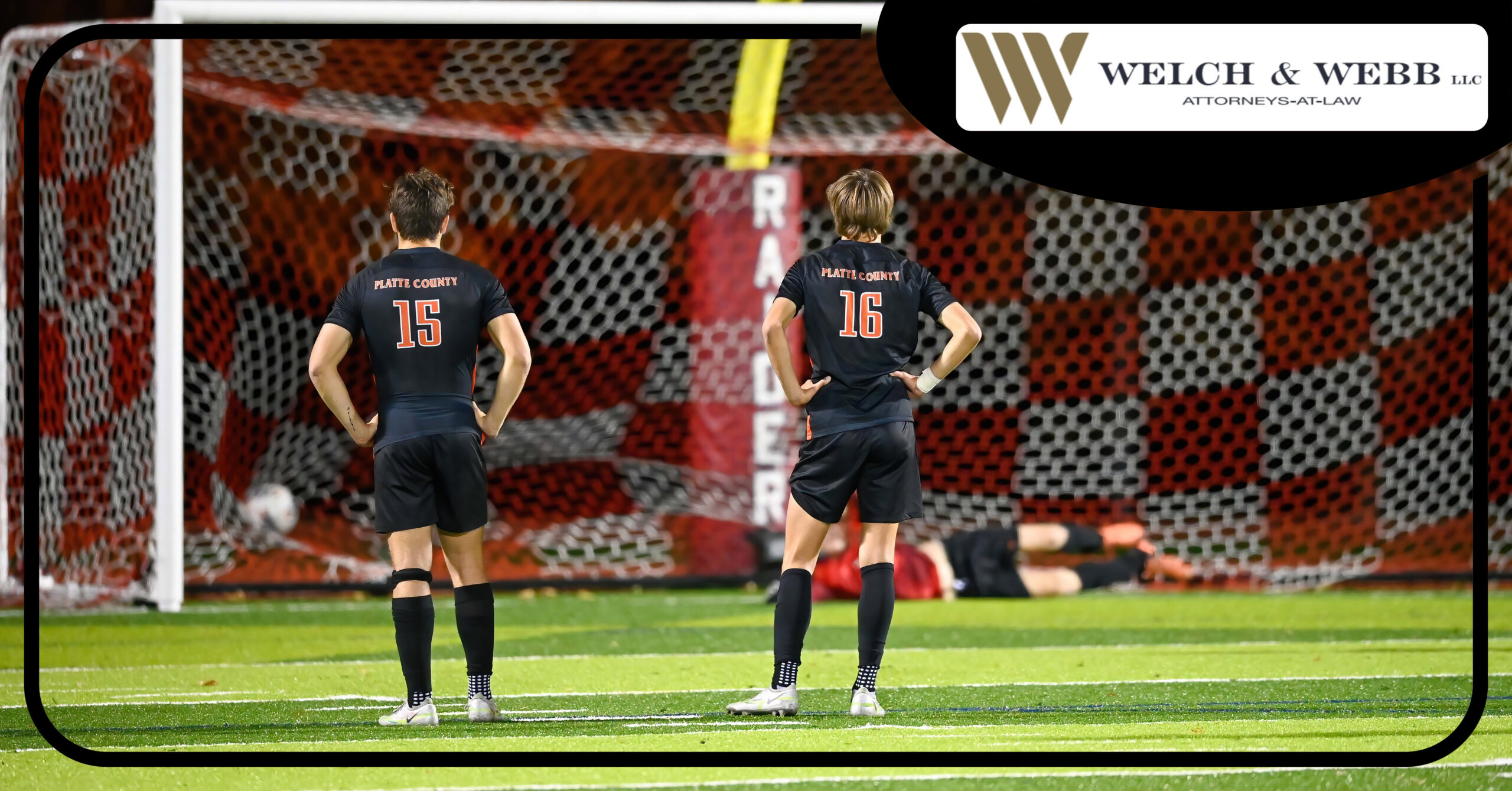 KANSAS CITY, Mo. — Platte County ended up on the wrong side of two difficult foul decisions in the latter part of Tuesday’s Class 3 District 8 semifinal. Add in an unfortunate injury to senior leading scorer Aaron Cordova in the first 15 minutes, and the Pirates simply didn’t have enough to fend off upset-minded host Pembroke Hill at Robert L. Hicks Field.

In the 85th minute of a sudden-death overtime situation, the head official awarded Pembroke Hill a controversial penalty kick, and senior Aidan Lacy calmly stepped up and buried the shot from the spot low and to the left past sophomore goalkeeper Paul Havemeier. The sixth-seeded Raiders earned a 2-1 victory, their second straight upset in a deep bracket, while Platte County players were left to console each other after the end of a promising postseason run.

“It is a tough spot,” Platte County coach Ashlyn Brantley said. “You do everything so you don’t have to go to PKs in the end, when (a call like that) happens in a game, yeah, it’s a tough moment, but you have to just put your faith in what we can do. Hopefully our keeper makes a save there; we’ve had some decent saves this season on PKs, so we’re hoping for the best. It just didn’t work out our way tonight.”

The reason for Havemeier facing the decisive penalty kick goes back to the first costly foul for Platte County (16-6) that eventually doomed a nine-game winning streak. The Pirates turned the ball over in the back, forcing senior goalkeeper Jordan Hedrick all the way out of the box in an attempt to stop a breakaway. His sliding challenge missed the ball and resulted in a red-card foul, leading to his ejection and racing the Pirates to play the remainder a man down.

Havemeier entered the game, and Pembroke Hill’s stoutly struck free kick from 21 yards out rattled the crossbar and went out, keeping the game tied at 1-1. He continued his trend of strong play after having filled in for Hedrick while out with a concussion over a three-game span that included a penalty kick shootout win over Grain Valley.

“He’s definitely stepped up,” Brantley said. “He’s been another one of those players that stepped into a role and took it by the horns. Coming in, we talked about no unnecessary fouls around the box. We seemed to give Paul like three or four right there as soon as he came in, but he took care of them each time.”

Havemeier stepped up under pressure, launching his undersized frame to go high and tip over a free kick from 31 yards out moments later to keep Platte County level. He would go on to force a left-footed shot from a tough angle for Pembroke Hill freshman Morris McLiney, who rolled the shot wide, and then came off his line to collect a loose ball under pressure. The Pirates even managed chances of their own while playing 10-on-11.

In fact, Platte County junior forward Gavin Nichols, who scored the game’s opening goal, created a scramble near the left post in the 83rd minute in what could have been the first of two 15-minute overtime halves ahead of a penalty shootout. However, the Pirates were unable to settle a solid shot, and the second attempt eventually rolled wide.

“Even in that overtime period, we had an opportunity where it’s pinging across the goal, and we didn’t get to finish it,” Brantley said. “But when we’re creating those opportunities against good teams, we’ve got to finish them.”

Entering with the No. 2 seed, Platte County went on the backfoot early in the matchup, and Cordova went down in the 12th minute after absorbing contact without a call. He eventually left the field and went to a local hospital where he received a diagnosis of a dislocated elbow.

Despite a lack of early chances, Nichols struck with precision in the 23rd minute.

Platte County freshman midfielder Cameron Habel played Nichols open with an enticing cross from out on the left. He went in uncontested and hit a shot from 13 yards out that tucked just inside the left of the post and gave Platte County a 1-0 lead.

“Those are the opportunities we want to create,” Brantley said. “We weren’t creating as many of those, especially in the first half. It was kind of all over the place so when we got that opportunity we were hoping to create some momentum coming off that and keep it going, but yeah, we loved that goal.”

Pembroke Hill (8-14-1) leveled just 6 minutes later when sophomore Beau Herber rocketed a shot past Hedrick, who made four saves, from well out on the right. The rocket of an equalizer seemed to inspire the Raiders, who ended up creating a repeated chance to take the lead in the closing seconds of the first half.

In what ended up a confusing and stressfully long sequence, Platte County gave up a foul just outside of the box along the left part of the end line. The resulting dangerous free kick came to nothing, but the official stopped the clock with 3.8 seconds left, ruling the Pirates encroached inside of 10 yards and offered a redo.

Pembroke Hill took the kick again, only for the official to make the same ruling and offer a third attempt. The Pirates cleared that one as well, and halftime mercifully hit with the teams still tied 1-1.

“I give credit to those guys. They stayed focused each time, and each time they got it out. That’s all we can ask them to do,” Brantley said.

Platte County dominated the chances in the early part of the second half, missing out on multiple opportunities to take a lead.

In the 41st minute, Platte County junior midfielder AJ Schrick, who had a hat trick in Platte County’s first-round district win, found Nichols on the back post off of a corner kick, but the junior turned a header wide. Nichols then found himself in behind the defense in the 48th minute but dragged a left-footed shot all the way across the face of goal and wide right.

Nichols and Cordova had been an effective pairing up top in recent weeks.

Cordova started for Platte County as a freshman during the best season to date in program history that ended with a Class 3 state runnerup finish. He then pursued other opportunities for soccer outside of high school competition the past two years but moved back home for his senior season.

After dealing with a nagging quad injury early in the season, Cordova had three hat tricks during the a win streak that started after a loss to Park Hill South, and the Pirates missed his presence after going down with the injury.

“We definitely missed Aaron, but throughout the season, we’ve had players step up,” Brantley said. “We knew other players could finish and score a goal if we needed them to. We had those opportunities we were creating; we just didn’t get them in.”

Platte County’s last best chance came around the 58th minute. He pushed a header off a Schrick free kick wide, and moments later, a misplay from the Pembroke Hill goalkeeper misplayed a ball that eventually bounced off the post. He recovered to deny a pair of shots from Nichols and then sprinted out to almost impossibly gobble up a shot from Schrick that would’ve had to navigate other traffic in front of net even if it hadn’t been stopped.

Minutes later, Hedrick was out of the game, and the difficulty level of finding a winner drastically went up.

Platte County continued to survive, but in the 85th minute, Lacy cut into the box from the left in a one-on-one situation against Platte County senior defender Mark Wiesehan, a steady presence in the Pirates’ back three as a first-year starter. The two jostled for position, but Lacy appeared to make the most of what looked minimal contact when he went to the ground.

The official emphatically pointed to the spot, and Havemeier gave impressive effort in a dive to his right but couldn’t make the stop in unbelievably difficult spot.

In the aftermath, Wiesehan and others tried to comfort Havemeier, while many of the players dropped to the ground or stared into the night sky over The Plaza in disbelief of the ending chain of events. Pembroke Hill went on to lose 4-1 to top-seeded KC East in Thursday’s final, which the Pirates would have had to play without Hedrick even with a win.

“We’re proud of (Paul) and look forward to what we have with him the next few seasons,” Brantley said.

Despite the frustrating end, Platte County quickly rebuilt from last year’s 20-4 season with a senior-heavy roster. The Pirates recruited Hedrick from the baseball team to fill a notable void in goal, while Wiesehan, freshman Jackson Goodale and senior Joseph Ibarra — the only other player besides Cordova left who played in the 2019 state title game against Rockwood Summit — formed the most consistent back-three combination of back-three defenders replacing a trio of starters from 2021, although junior Daniel Bunge also saw significant time.

In addition, Schrick, senior Felix Victore and juniors Ahoy Victore and Connor Currence stepped into more prominent roles in Platte County’s midfield, while Habel gave the Pirates a second regular freshman starter. Cordova provided the biggest boost, pairing with Nichols, the leading returning scorer, to maintain a diverse attack. The Pirates will miss the five seniors but have plenty of reasons for optimism moving forward.

“It’s always frustrating to end it this way,” Brantley said. “It’s been something repeated throughout the season where somebody’s taken out; somebody else has to step up. They’ve definitely been doing that this season. Those players we’ve asked to move into certain roles or positions, they’ve shown out and showed up and done all that we’ve asked.

“To continually see that our team grew in that direction and they came together and stepped up when they needed to, we’re happy as coaches and confident in our players, but that makes it that much harder to end it like this.”

The Pirates decisively won a unique district opener Saturday at Pembroke Hill, knocking off the team that defeated them in last year’s title game.

Schrick scored twice in the first half to overcome an early deficit, finding the net off of a cross from Cordova in the seventh minute and burying a free kick in the 13th minute to make it 2-1. Schrick’s third came in the 53rd minute on the first of two assists for Ahoy Victore.

Cordova made the score 4-1 moments later on a tap-in goal off a pass from Ahoy Victore.

Guadalupe Centers (6-9-1) took a 1-0 lead after just 93 seconds but didn’t score again until just under 7 minutes remained on the clock. The Aztecs lost a regular season matchup with Platte County in the 2021 regular season but came back to beat the Pirates 3-1 later in the season in the Class 3 District 8 title game.