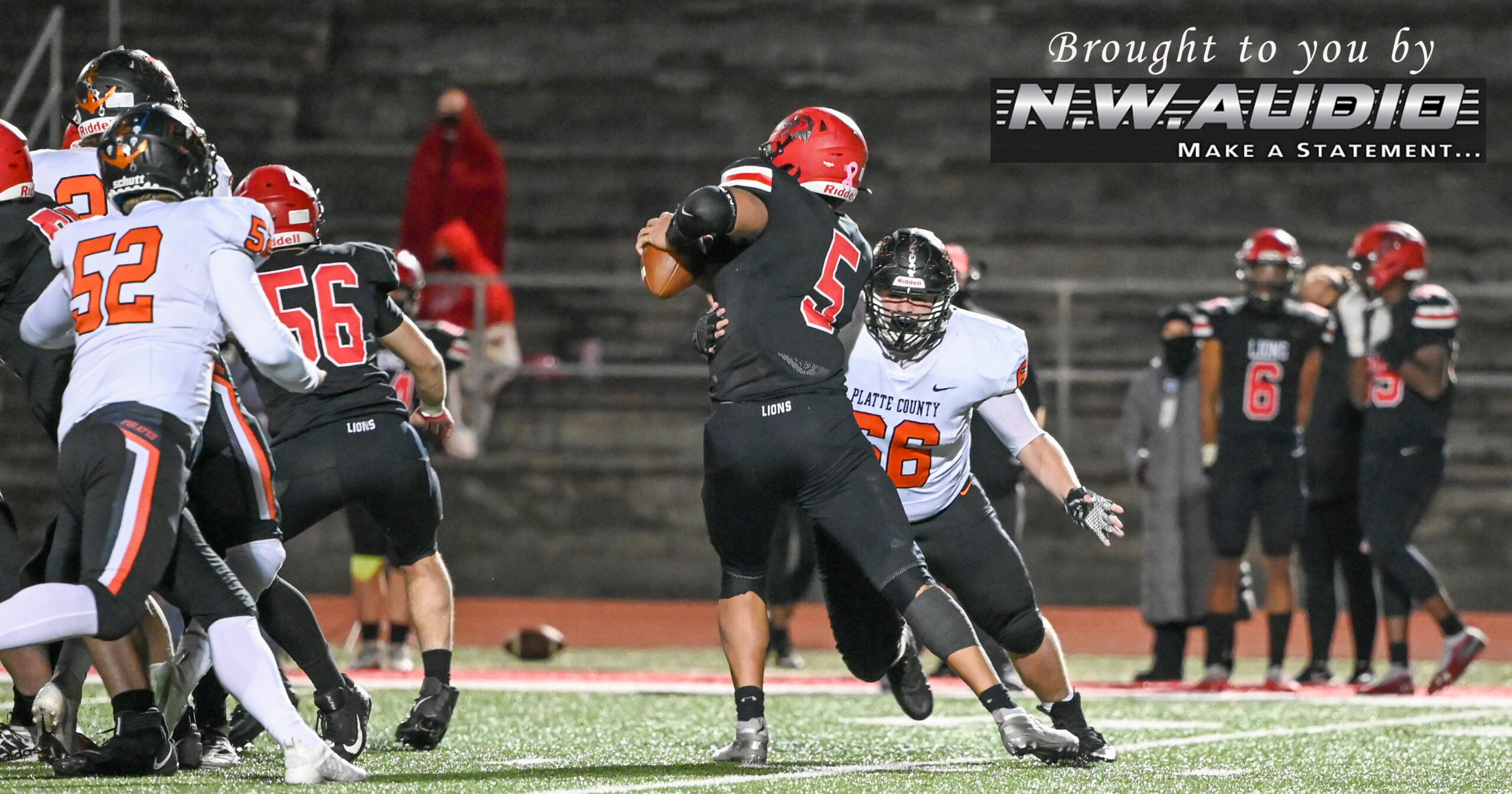 LANSING, Kan. — When a fourth down pass fell incomplete, Platte County’s defensive players headed to the sideline for an exuberant celebration of a turnover on downs. Little did they know, an even bigger challenge loomed.

An untimely fumble on the next snap returned possession to Lansing inside the 5-yard line, and Platte County’s shutout streak seemed over. Instead, the Pirates stopped four more goal-to-go running plays and preserved the lead in a rare nonconference game across state lines.

The eight straight stops from inside the 10 in the second quarter were the key series in what became a second straight shutout for Platte County — a dominant 27-0 victory at Lansing High School in a chilly, windy conclusion to the regular season.

“We knew we had to bow our necks so we got down; we got nasty and we just grinded it out,” said Platte County senior defensive tackle Keaton Smith, who recorded five tackles and a sack while anchoring the interior front. “We couldn’t let ’em (score), had to keep that goose egg up there on the board. We were only up one score at the time so we knew we couldn’t let anything up.”

Platte County senior wide receiver Dayton Mitchell caught a touchdown pass and ran for another score, while senior quarterback Chris Ruhnke was efficient in throwing for 188 yards and two touchdowns. However, a combination of costly penalties and miscues limited the offensive production for the majority of three quarters.

On the game’s opening possession, Platte County marched 62 yards for a touchdown. The key play was a 14-yard pass from a wildly scrambling Ruhnke to senior running back Cayden Davis followed by a 7-yard run from Davis that set up Mitchell’s walk-in 7-yard touchdown reception over the middle to make it 7-0.

But the Pirates wouldn’t score again until the fourth quarter.

“We definitely had some mistakes of our own,” Mitchell said, “and we can definitely clean up.”

Lansing (4-3) couldn’t take advantage and finished with just 167 yards of offense despite featuring Division I tight end/defensive end recruit at quarterback in 6-foot-5 junior Caden Crawford, a multi-pronged rushing attack and dynamic wide receivers. The Lions completed only two passes — one going 62 yards senior wide receiver Hunner Nelson — and Crawford had the longest run of the night on a 33-yard scramble in the second half.

The remainder of Lansing’s 42 snaps averaged less than 2 yard per play and included three sacks and two tackles for loss. The performance came on the heels of a 41-0 shutout of Raytown South, and the Pirates have allowed more than 20 points just once and have not surrendered a score of any kind since late in the fourth quarter of a Week 7 win at Winnetonka.

“Our defense was pretty solid last year,” Platte County coach Bill Utz said. “Obviously, we had a lot of seniors on that unit, but we had some playmakers coming back. I think they’re starting to gel. They’ve had a really good season.”

Lined up next to Smith, Platte County senior defensive tackle Alex Stearns racked up a team-high eight tackles (one for loss), while senior defensive back Luke Filger was next on the stat sheet with six tackles. Pirates junior defensive end Jaydon Walls and junior linebackers Blaine Keuhn and Trevor Scott added five apiece with Scott also contributing a tackle for loss and a sack.

Platte County senior linebacker Tryce Brooks recorded the other sack in the fourth quarter, as the Pirates worked hard to preserve the shutout. The Pirates didn’t even force a turnover and simply held up for 48 minutes against a Lansing offense that had scored 21 or more in 5 of its first six games.

“That’s a tough offense,” Utz said. “There’s so many moving parts to it, and when it’s run really well — and they do a pretty good job — it’s hard to defend. So for us to be able to stay that disciplined throughout the game is impressive.”

The defense came up with repeated big plays, especially while preserving the initial 7-0 lead.

After a 53-yard punt from Ruhnke backed Lansing up inside the 20 early in the second quarter, Crawford, who finished 2-for-11, uncorked a deep ball to Nelson down the home sideline to put the Lions on the edge of the red zone. A defensive pass interference call four plays later avoided a turnover in downs and resulted in a first down at the 10.

Two run plays from Lansing made it third and goal at the 2, when Scott knifed into the backfield to stop running back Jack Knutson for a 2-yard loss. Crawford rolled right on fourth and goal, but the pass was dropped in the back of the end zone.

The excitement didn’t last long when Ruhnke mishandled the next snap, and Lansing fell on the loose ball at the 4. Crawford plunged ahead for 3 yards on a first-down sneak but lost a yard on the next. Lions running back Bryson Raymond then ran for no gain, and Crawford’s third sneak attempt was stopped at the 1 with Smith and company pushing him back.

“We knew the QB sneak was coming because of their audibles,” Smith said. “We caught onto them early so me and Stearns just got into a four-point (stance), got low, we grinded through them and stopped him all three times.”

The two possessions took nearly 7 minutes off the clock, and Platte County immediately went three-and-out. Lansing did the same, and the final drive of the half ended on a Hail Mary from near midfield, sending the Pirates into halftime still nursing the 7-0 lead.

“The goal line stand and being down on the goal line, that’s almost guaranteed points when you give the ball that close,” Utz said. “For us to be able to hold that shows just how much grit these guys have.”

Crawford’s 33-yard run on the opening possession of the second half put Lansing into Platte County territory again, but the Lions punted from the 34.

Ruhnke then engineered what appeared to be a 96-yard backbreaking touchdown drive that included three completions to Mitchell. Davis also added solid running but first saw one of Platte County’s six holding penalties negate a 34-yard run, and when he dove into the end zone on a 12-yard catch and run, the official bizarrely ruled him down at the 1.

Lansing then stopped Davis on a fourth-down run to take back over.

“We were worrying about the refs too much, I think — players and coaches,” Mitchell said. “We kind of lost our momentum, and we need to get that back next time.”

Platte County’s defense then forced another three-and-out, and the floodgates opened.

Mitchell capped a quick 36-yard touchdown drive that finished early in the fourth quarter by plowing into the end zone on a 1-yard run after taking the snap as a Wildcat quarterback to put the Pirates ahead 14-0.

“Dayton’s a tremendous athlete,” Utz said of Mitchell, who finished with seven catches for 87 yards and added 15 yards on three rushing attempts. “Being able to take a snap and scoring off that, it just goes to show some of the things he can do for us. He’s a very solid kid.

“When he’s touching the ball, I always expect good things.”

After a holding penalty erased a 32-yard completion to senior wide receiver Joey Schultz, Ruhnke, who finished 16-for-28, scrambled 17 yards to convert a third and 17 and then hit Schultz for a 13-yard touchdown two plays later to increase the lead to 21-0 with 7 minutes, 32 seconds remaining. It was Schultz’s only catch of the night and his fifth scoring grab of the season — first since Week 5 at Smithville.

Platte County sacked Crawford twice and harassed him twice more on the ensuing drive to force another quick turnover on downs.

Platte County ended up with 323 yards of offense with Ruhnke adding 33 yards rushing and completing another four passes for 49 yards to senior wide receiver Colby Rollins in a persistent offensive effort.

“I told them the first half there were some things we could do better,” Utz said. “Second half, I thought they played pretty well and battled some adversity and did some different things that played out the way we expected it to.

Platte County’s win over Lansing in the first meeting between the two teams since 1911 — a 65-5 Platte County win 109 years ago, for the record — completed an 8-1 regular season, having won five straight since a loss to North Kansas City. Now, the Pirates scoreless streak will continue for at least another week after the Pirates secured the No. 1 seed in Class 5 District 8 and the bye in the seven-team bracket.

Now the attention shifts to another lengthy postseason run in an entirely new postseason scenario.

Platte County reached the Class 4 Show-Me Bowl for the first time in program history and finished as runnerup after a loss to Webb City. The new alignment this year moved the Pirates into Class 5 for the first time but there will be familiarity with some of the District 8 field.

“No excuses,” Mitchell said. “We’re here; we made a run last year, and I think we can make a big run to the playoffs this year. I’m super excited.”

North Kansas City (5-4) lost for the third time in five games and ended up with the No. 4 seed and will host Oak Park (3-6) this week — just two weeks after NKC won the first matchup between the two teams 28-27. The winner advances to play Platte County, which could take a shot at revenge if the Hornets win.

In Week 4, North Kansas City came back from down 31-7 early in the third quarter to stun Platte County 42-37 win, courtesy of a unique combination of four 70-plus-yard touchdown returns in the second half. In addition, Park Hill South (7-2) kept up its winning streak and earned the No. 2 seed.

“We’re hype,” Smith said. “We know there’s a lot of work to be done still, but we’re getting better every practice, every game, and we’re loving it. Even though it’s a bye week, we know it’s not a week off. We’ve still gotta play in two weeks so we’ve just got to work hard in practice and keep the intensity up.”