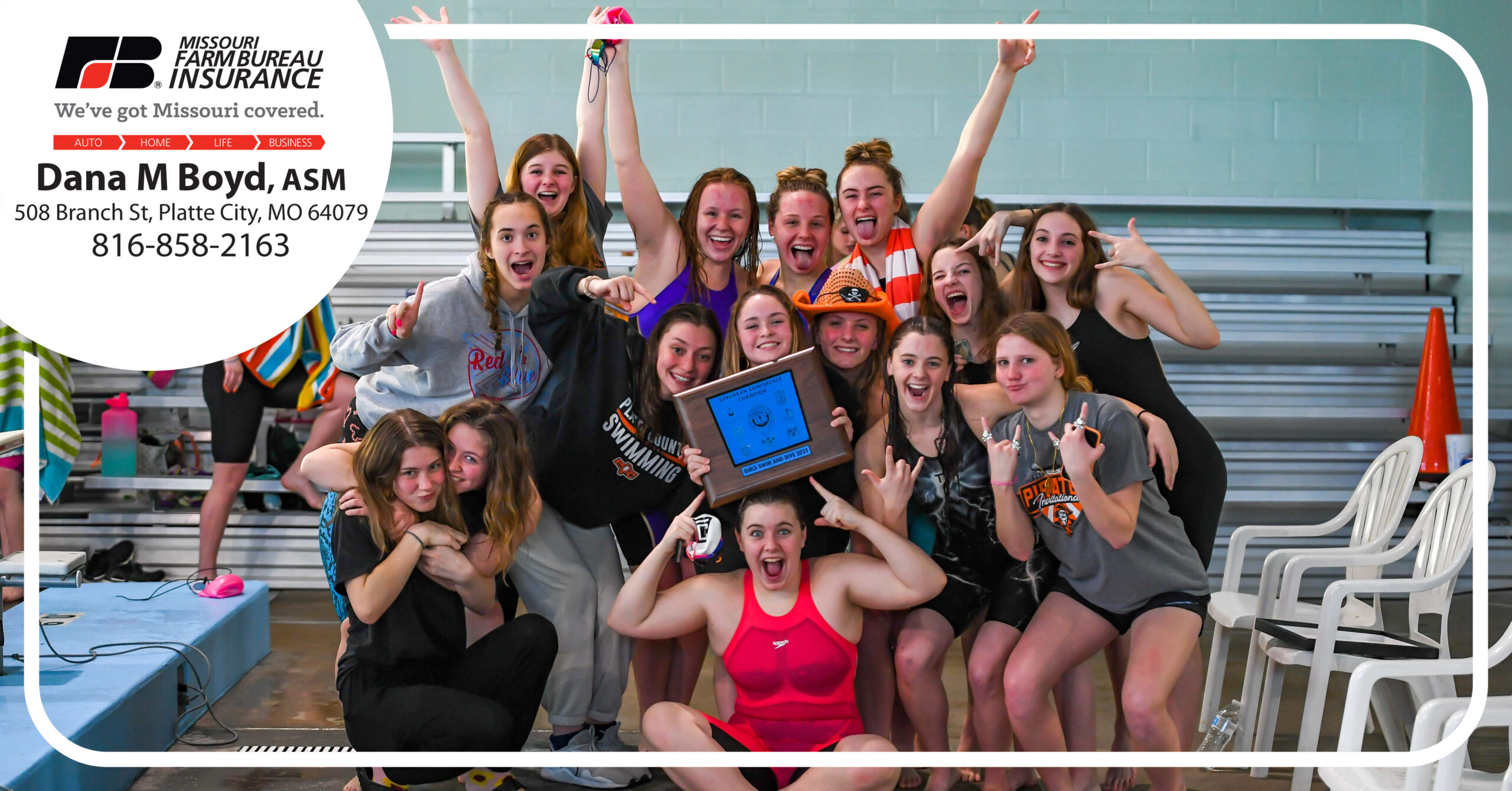 Platte County came away with just two individual titles in the Suburban Conference Blue Division Championships over the weekend, but the Pirates claimed the team crown for a fourth straight year thanks to overwhelming depth of talent.

Stacking the 200- and 400-yard freestyle teams plus a victories for junior Drew DeLay in the 100 breaststroke and senior Meredith Ballou in the 200 individual medley paid huge dividends for Platte County in the five-team meet at Gladstone Community Center. The Pirates accrued 554 team points and finished nearly 150 clear of runnerup Kearney (406) with Winnetonka in third at 386.

DeLay, Ballou, Hays and junior Madeline Judy comprised the winning 200 freestyle team at conference (1:43.82), while freshman Madeleine Stone joined DeLay, Ballou and Hays for the victorious 400 freestyle (3:52.89). With DeLay also capturing her individual title in the 100 breaststroke (1:10.48), the Pirates were first place in three of the meet’s final four events to pull away to the title.

DeLay didn’t hit a season-best in her breaststroke win, but Hays did in finishing second at 1:10.68. Platte County ended up with four of the top six placers in the event — junior Blair Bolling (fourth) and junior Ella Chiddix (sixth). This proved a common theme for the team champion Pirates.

Ballou topped the 200 IM field in a new season-best time of 2:17.02, which currently ranks No. 10 on the Class 1 list of state consideration times. Stone (2:28.49) and freshman Ireland Shank (2:35.64) were second and third for Platte County in a clean sweep. In the 100 butterfly, Ballou came in second in a new season-best of 1:01.45 — now No. 13 in Class 1 — with the Pirates having half of the eight A finalists. Shank was fifth, junior Charlotte Hammond sixth and junior Emilee Handke eighth.

In the 100 backstroke, Madeleine Stone (1:05.74) and sophomore Jayden Benninghoff (1:08.04) both put up state consideration times for Platte County while placing second and third while senior Erian Stone finished fourth in 1:09.61. The Pirates grabbed the second, fifth and sixth in the 50 freestyle with Hays just off her season-best as the runnerup (25.49) with junior Lauren Beatty and Judy rounding out the top six.

While having no individual finishers in the top three for the 100 freestyle and 500 freestyle, Platte County still came up with big points in the events with multiple qualifiers for the A final. Erian Stone (fourth), Judy (fifth) and Benninghoff (seventh) were clustered in the 100 freestyle finish, while Bolling, Beatty, Chiddix and junior Samantha Teufel came in fourth through seventh in the 500 freestyle final.

Rounding out the top individual finishes, DeLay came in second in the 200 freestyle with a season-best 2:05.85.

With the strength of the lineup in the freestyle relays, Platte County’s Madeleine Stone, Bolling, Shank and Judy still placed third in 2:02.91. The Pirates were off their season-bests in all three relay races but have top-10 Class 1 times in each, including the No. 4 200 freestyle mark of 1:43.15.

Platte County will now turn to figuring out the exact number of qualifiers for state, knowing all three relays will advance. The top 32 swimmers in each individual event also qualify, but an individual competitor can only compete in a maximum of four events, no more than two of which may be individual events. The Pirates currently have 11 individuals in the top 32 with a handful of others on the edge and potential qualifiers once the entry list is finalized. Teams are also limited to four individuals in any one event.

Hays and Ballou two of only three swimmers in the 200 freestyle final but provided each other with the competitive push to set season- and career-bests Monday in Lee’s Summit, Mo.

Platte County legend Shannon Banark, a 2021 graduate and Division I swimmer at South Dakota, set the previous school record in the event during her freshman year with the Pirates at 2:03.75. She didn’t put a strong focus on it in other years but left the program with the individual school record in all swimming events.

Shank turned in her 100 butterfly time of 1:04.88 to give her a shot at making the state field in that event.