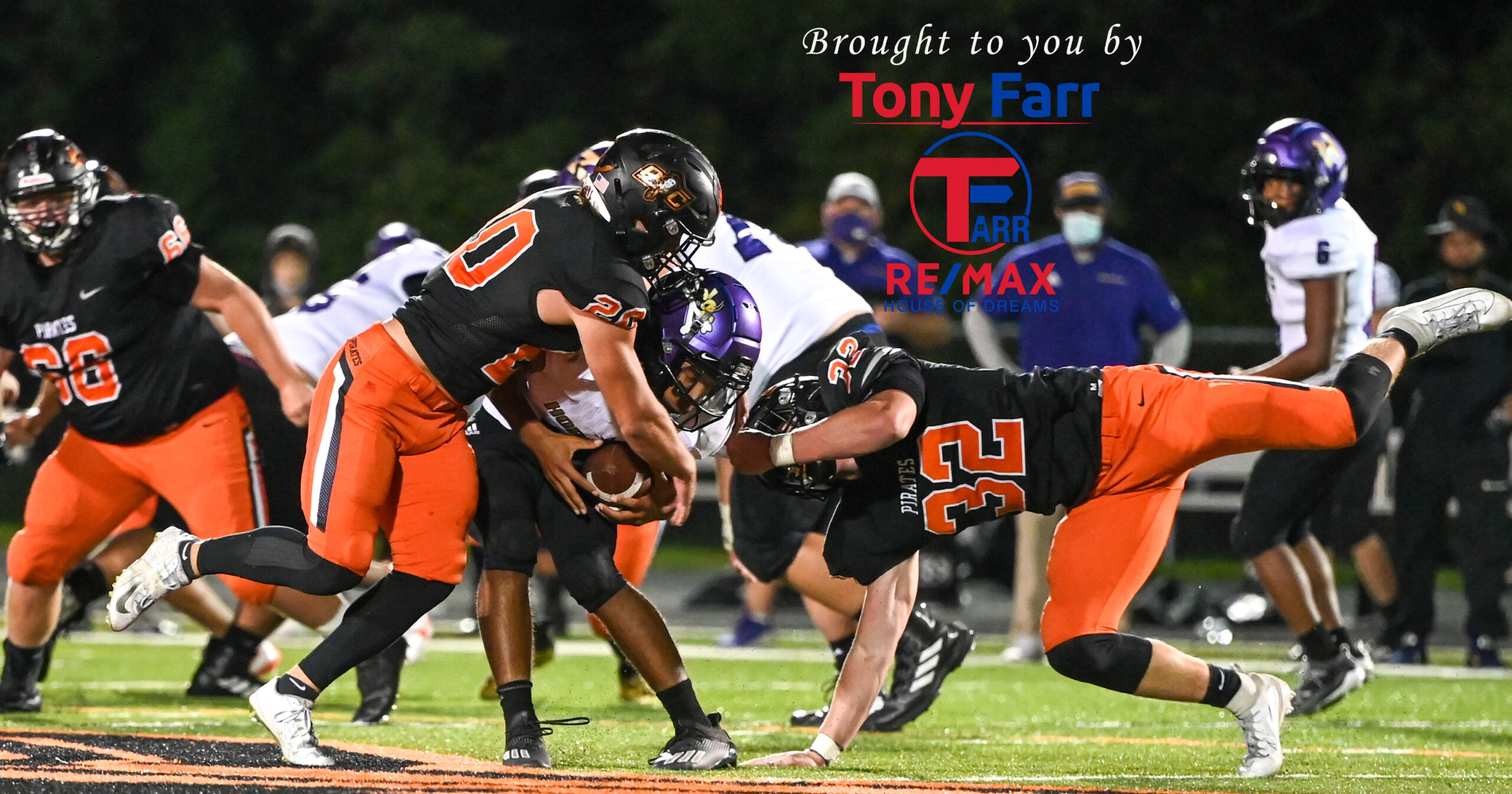 As the reality of almost unfathomable collapse set in, Platte County coach Bill Utz didn’t know whether the players should try to quickly forget and move on or get angry and use the result as fuel.

“Good question,” Utz said following the Pirates lost 42-37 to North Kansas City on Friday at Pirate Stadium after allowing the Hornets to score 35 unanswered points in the second half on a dizzying array of return touchdowns — a kickoff return, two pick-sixes and a blocked field goal brought back for a score.

Platte County (3-1) saw a perfect start to the season come to an end in devastating fashion, and a rivalry matchup with Suburban Conference Blue Division title implications immediately looms. The Pirates travel to Smithville (3-1) — winner of three straight since a season-opening loss to Grain Valley — that will but assuredly decide the league title again this year.

A year ago, Platte County swept the Blue Division and Class 4 District 8 semifinal meetings between the two — an easy 15-0 mini-blowout in the regular season and a last-second escape in the postseason. This matchup could be just as unpredictable with the Pirates coming off their first brush with adversity this year.

“Humbling never hurts; it just doesn’t,” Utz said. “It’s one of those situations where we’ll see how we react to it, you know. We have to react in games when bad things happen, and if you take the whole season and look at it like a game with momentum, then we have to stop this loss and get back on track.”

The outcome and fallout from last week’s game became even more intriguing Monday when North Kansas City and Platte County were placed together in Class 5 District 8. Platte County actually came in at No. 1 in the initial standings, delayed four weeks due to COVID-19 and uncertainty, with North Kansas City (3-1) at No. 2, although the teams would flip spots based on head-to-head results if the postseason started today.

Moved up to Class 5 for the first time in program history after a run to the Class 4 Show-Me Bowl in 2019, Platte County seemed on the verge of a blowout in the first meeting between the two teams since 2013. The Pirates scored 31 straight between the first and third quarters only to allow 35 unanswered from there.

Platte County senior quarterback Chris Ruhnke spread 27 completions in 53 attempts to seven different receivers and finished with 361 yards — the second highest total for him this season and in his career (365 in Week 1 vs. Park Hill South).

Ruhnke also threw three costly interceptions in a game that saw Platte County outgain North Kansas City 436 to 198 but with the Pirates running 24 more plays due to the quick scores allowed on returns.

“Colby had a couple of drops, but he came back, made some nice catches, which is good,” Utz said. “Dayton looked awesome in the first half. Chris did fine, too. It wasn’t so much that we sputtered on offense really, but you can’t give up points the way we gave up points. We gave up two pick-sixes; they have two defensive scores, two special teams scores. That’s just not good.”

Perhaps more importantly, Platte County built a 31-7 lead by early in the third quarter. The Pirates led 17-7 at halftime but came out of halftime and needed only two plays to add to the advantage after North Kansas City tried and failed on an onside kick attempt.

Ruhnke dropped a pass into Rollins’ arms behind the defense, and the speedster raced the rest of the way to a 49-yard touchdown — his first of the season to make it 24-7 just 49 seconds into the third quarter.

Three plays later, Platte County sophomore cornerback Garrett Smith stepped in front of a pass from North Kansas City junior quarterback Kail Williams and romped 42 yards down the visitor’s sideline for his first career touchdown on his second interception of the season and what could have been a backbreaking score. Instead, up 31-7 with 10:28 left in the third quarter, the Pirates’ downfall started on the ensuing kickoff.

“The big thing (to start the third quarter) is we even did what we wanted to do,” Utz said. “We go down and score; we get the defensive score. We just didn’t put them away. Again, once momentum goes one way on their big kickoff return — huge special teams play — that turns it.”

Platte County seemed to have the response, and a big fourth down conversion near midfield when Ruhnke hit Mitchell with a nifty over-the-shoulder pass put the Pirates in scoring position. However, North Kansas City senior defensive back Malik Johnson picked off a pass when a receiver fell and returned it 92 yards for another score that closed the deficit to 31-21.

From there, Platte County’s offense went cold, and the momentum fully shifted. The Pirates went three-and-out, and after a short punt, North Kansas City put up its second offensive touchdown on sophomore running back J’Len Friar’s second rushing score of the game — a 7-yarder that made it 31-28 with 3:41 left in the third quarter.

The teams then exchanged punts, and Platte County had its last chance to add to the lead. However, the Pirates couldn’t take advantage of the short field and opted for a 31-yard field goal try. There appeared to be confusion on the snap, and North Kansas City raced into block the kick.

Oliver Norris, a senior defensive back for North Kansas City, scooped up the ball and went 72 yards the other way for a touchdown. The Hornets’ 35-31 lead with 8:39 left in regulation was their first since early in the first quarter.

“We’ve said all along, ‘Special teams win games,’” Utz said. “We take a lot of pride in our special teams, but they definitely beat us in that game tonight. It was one of those, does the field goal help you there? Thought process: take a field goal, and they have to at least score a touchdown to beat you.

Platte County went three-and-out for the third time in four drives but appeared to get a key stop with 5:21 to go. However, a roughing the punter penalty kept North Kansas City’s drive alive and allowed the Hornets to milk more than 3 more minutes off the clock.

On a critical third down, Platte County junior defensive end Jaydon Walls and junior linebacker Blaine Keuhn came up with a key tackle for loss on the quarterback to force a punt that gave the Pirates one last shot at a game-winning drive.

Down four, Platte County quickly moved into North Kansas City territory on a weaving 36-yard quarterback draw from Ruhnke, but on the next snap, he threw his third interception on a ball knocked into the air and picked off. North Kansas City senior safety Roman Vibar grabbed the ball out of the air and returned 82 yards for the final big-play touchdown that sealed the win for the Hornets.

Platte County’s defense ended up allowing less than 200 yards of offense, coming in having not allowed more than 17 in any game yet this year. Trevor Scott, a junior linebacker, led the Pirates with eight tackles and a sack, while Keuhn had five tackles (two for loss) and a sack. Cade Fowler, a junior defensive back, had six tackles and his second interception of the season, and senior defensive back Collin Tyson added six tackles, as well.

“Momentum was something they grabbed a hold of; they didn’t give it back; we didn’t take it back,” Utz said.

North Kansas City’s first offensive touchdown came after a post-play personal foul on a third-down stop kept the game’s opening drive alive. Friar’s 5-yard touchdown made it 7-0 — the second time this season Platte County has faced an early deficit but first since the season-opener vs. Park Hill South.

Platte County came up with a gritty answer on a prolonged drive that included a third-down conversion pass to Rollins and a fourth-down pass to Salzman that put the Pirates at the 1. Ruhnke capped the drive with a 2-yard run around right end to the pylon to make it 7-7 with 4:34 left in the first quarter. The Pirates then forced a three-and-out and another long completion to Rollins to set up Davis for a 2-yard touchdown run early in the second quarter — his fourth score on the ground in two weeks.

The drive that led to Rhoden’s 37-yard field goal and a 17-7 lead midway through the second quarter included a costly loss.

On a running play, Platte County senior center Grant Gomel went down with an apparent leg injury, and he left and did not return. Trey Butcher, a senior with three years of starting experience, moved from left guard to center, while seniors Jesse Schillinger and Colby Guffey remained at the tackle spots and junior Joe Nicholson stayed at right guard. Caleb Kelly, a junior, received his first significant playing time while filling in at left guard.

Davis ended up rushing for 49 yards on 10 carries, while Ruhnke had 27 on four attempts that include sacks taken. The status of the offensive line will be in question for a running game that has been inconsistent through four games.

“We’re thin there anyway so we’ve got to make sure that gets straight. We’ll see. We’re going to hope the best for him until we hear different,” Utz said of a first-year starter who waited for his opportunity.

After the field goal for Rhoden, Platte County couldn’t turn two late second quarter drives into additional points, and the Pirates also didn’t get a score after senior defensive end Forrest Boynton’s first-half fumble recovery, punting the ball right back on a short field. The only remaining scores ended up being the early third-quarter touchdown pass to Rollins and an 8-yard touchdown pass from Ruhnke to Rollins on a 2-minute drill drive to close the gap to 42-37 with 15 seconds left following a two-point conversion.

Platte County actually recovered the ensuing onside kick, but the officials ruled the ball was touched before going 10 yards, ending even the remotest hopes of an unlikely comeback. Despite any missed opportunities early, this loss didn’t feel like the three wins when the Pirates were stuck on 35 points and didn’t fully put away Park Hill South, Kearney or Grandview.

Ruhnke now has 10 passing touchdowns as the unquestioned engine for a high-powered offense but also seven interceptions through four games as Platte County continues to rely heavily on the passing game, even when the Pirates have built large leads.

“I think he’s a kid that doesn’t get too high, doesn’t get too low, but underneath that surface, I think he takes a lot of pride in what he’s doing,” Utz said. “With that, I think he’s trying to make things happen and maybe forcing some things he shouldn’t. But I’m keeping Chris. He’s a very good player, and he’ll get through this. This is a good growing pain for him, as well.”

Instead, Platte County goes into what will be its only matchup with Smithville, having won six of the past seven in the series with the lone loss being the Class 4 District 8 championship game in 2018. The last four have all been tight and memorable contests, and although the Blue Division title likely hangs in the balance, this will no longer be relevant to Class 4 District 8 standings involving the two teams.

Platte County will be looking to avoid another split of the conference championship between the two teams while also needing to avoid any other setbacks in their new Class 5 postseason assignment.